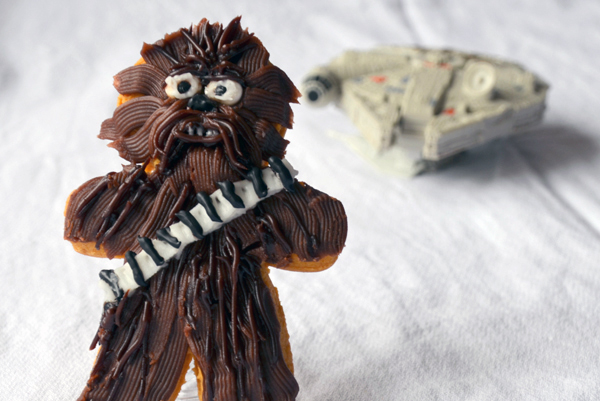 A long time ago in a galaxy far, far away…  there lived a small blonde weirdo who, for the sake of this blog post, we shall call Raffles Skywalker. The young Skywalker hailed from the tasty planet of Eats World and – as he consumed everything that wasn’t locked up with a gluttonous intent comparable only to Jabba the Hutt after a month on Weight Watchers –  it became clear that the fork was strong in this one.

My wee Jedi has decided that he wants to head somewhere far, far away… light years, in fact. He’s a touch disappointed when I  point out that our Starship is in the shop… the bloody hyper-drive is playing up again, and our X-Wing fighter just isn’t that comfy for a long distance journey.

But his disappointment is short-lived as a hologram suddenly appears with a message for my small delusional boy.

Raffles gets a glint in his eye that makes me nervous … because that glint usually requires me to balance a ball on the end of my nose whilst juggling chainsaws.

Can we? Yes, it seems we can. Because the little bugger pulls some kind of Jedi mind trick that soon has me in the kitchen and up to my armpits in slime and salami death stars… 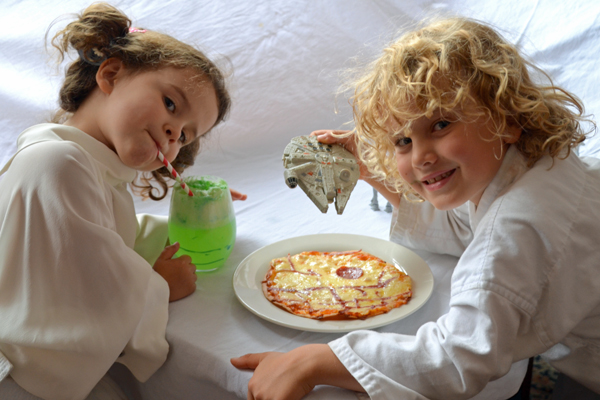 Raffles is only a recent convert to the world of grumpy wookies, neurotic droids and fearless Jedi knights, and I have to admit his interest has as much to do with glowing space-swords as it does the storyline. The boy is an ardent collector of all things sharp and pointy. In fact, in his six short years he’s managed to build an arsenal of swords and daggers that is roughly the same size as the armoury of the Australian Defence Force. But amongst his collection of plastic Viking swords, katanas and cutlasses there has been, in his opinion, a gaping hole. A hole that has recently been filled by the lovely folks at Hasbro. 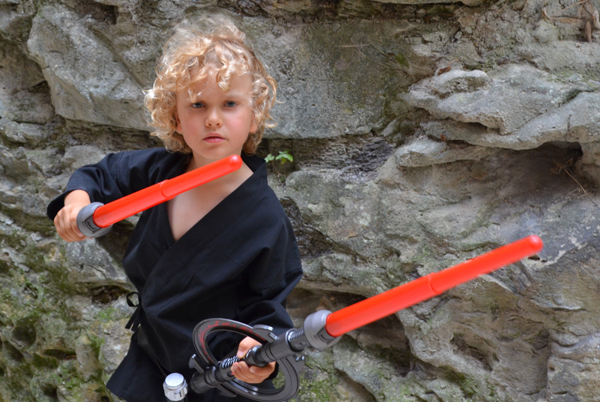 This is the awesome three-in-one Star Wars Rebels Inquisitor Light Saber and its presence has my boy on a bit of a Star Wars kick…  hence his desire to spend the morning forming a rebellion with his pals to strike out against the evil Galactic Empire and the forces of the dark side.

I figure Empire busting requires a fair bit of energy so first I fuel the kids up with some milk and cookies. Blue milk and wookie cookies that is. 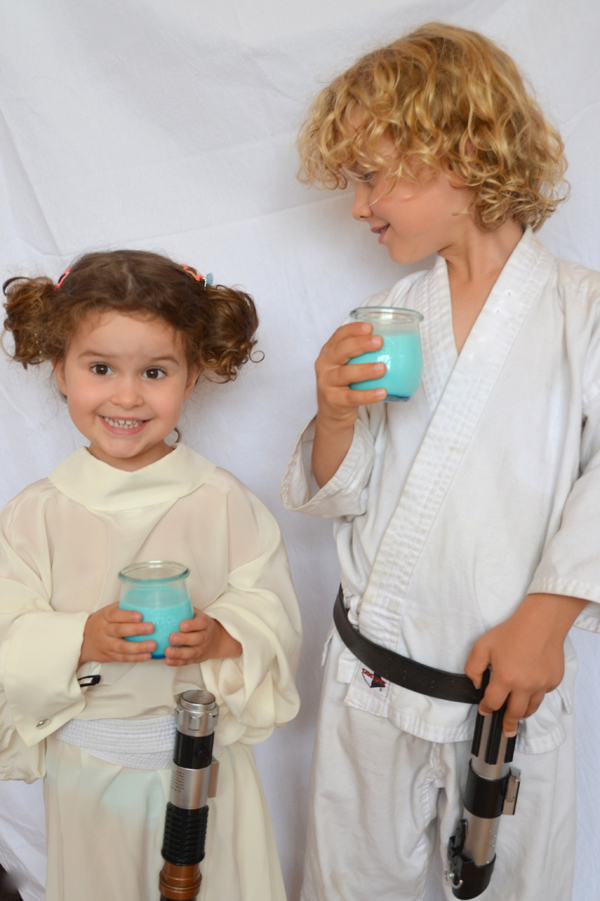 And what would a play date be without a little sister to bug you? Luckily for Raffles Skywalker, Princess Sugarpuff Organa is here to be a royal pain in his butt. We fashion her a dress from a backward shirt and  she too is soon sipping on the blue Star Wars Kool Aid… while annoying the crap out of her brother and his friends. Hey, every girl needs a hobby!

And then they are all off to Hoth (which looks surprisingly like our dining table) with the super cool Star Wars Command Millennium Falcon action play set. (do you think he’d notice if I steal his mini Han Solo? I always had a bit of a thing for him…)

While Raffles suits up as a Skywalker to lead the Rebel Troopers and Snowspeeders into battle, his bestie gives in to the power of the dark side… 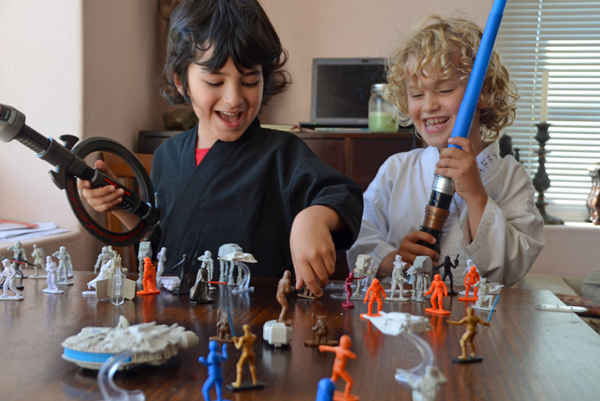 Essentially these sets are a little like (very cool) Star Wars toy soldiers only accessorised with a bunch of fab robots and fantastically detailed action vehicles. The Millennium Falcon is a particular hit with the boys. When pulled back and released, the ship races forward and then blasts off at hyper-speed to mow down the bad guys… and anything else standing in its way.

The great thing with these kind of toys is that the kids are using their imaginations to make up characters and create interactive scenarios.  And they’re having a blast doing it… I don’t think I’ve ever heard them giggle so much.

After a morning of play the kids travel from Hoth to Dagobah to suck on swamp juice.  Our bubbling Yoda Soda is a disgusting combo of lemonade, green ice cream and whizz fizz. Obviously the kids adore it. The death star pizza I make them for lunch is also a hit. 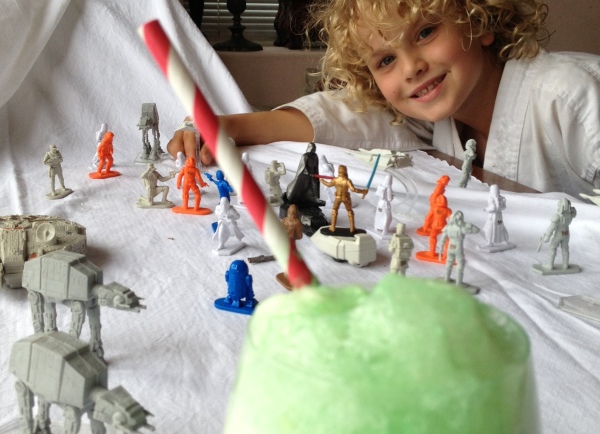 After his pals head home Raffles is glum, for it is written that any day of Star Wars play must end in an epic battle.  And besides a little biff over the Star Wars Command play set, the boys were so busy sucking back swampy soda and digesting deathstars that they’d missed the opportunity!

So, armed only with his too school-for-school Star Wars Rebels Inquisitor Light Saber and a whole bunch of attitude, we have journeyed to the ruins of the Ancient Island of Co-Ckatoo for Raffles Skywalker to face his nemesis, Dad Vader, Emperor of early bed-times and enforcer of cleaning rooms…

There is action. There is drama. There is heavy breathing.

And the most epic battle of them all  begins…

A battle of good against evil.  Of father against son.

Only one can prevail…

May the fork be with you! 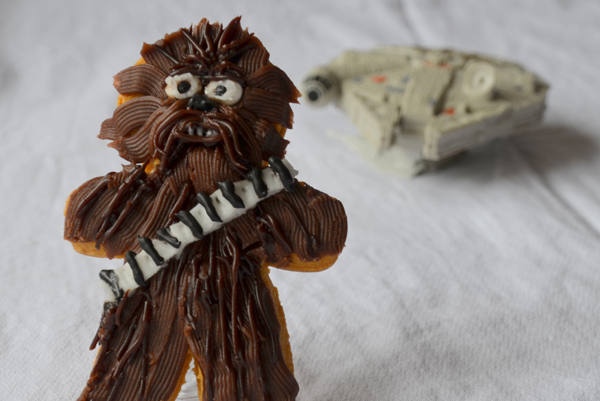 Disclosure: This is not a sponsored post. The lovely folks at Hasbro were kind enough to send a couple of Star Wars Command products for Raffles to check out and, as usual, he obsessed long enough that his thoughts turned to food and the creation of one of his epic play dates. And quite frankly, it was just too much fun not to share.

24 Comments on May the fork be with you