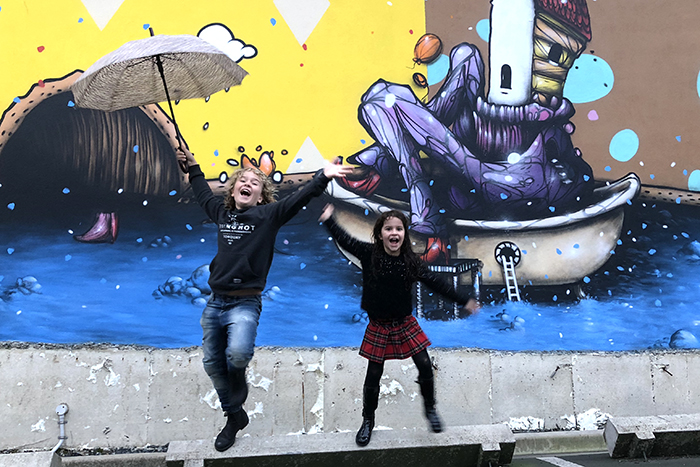 One of the best things about travelling with Raffles and Sugarpuff is how what started as an organic introduction to art has become something of an obsession. But it is something that I hadn’t realised had captured them quite so wholly until I saw their reaction to the Dunedin Street Art Trail.

I mean they’ve always loved a gallery but for them there’s something special about finding splashes of art hidden behind a nondescript door or down a quiet alleyway and the in-your-face fabulousness of spotting an epic artwork as we turn a corner.

So inspired is she by the artworks she spots strewn around cities, Sugarpuff has become quite the artist, spending hours every day doodling away, honing her skills from YouTube videos and investigating the techniques, colours and styles used by artists in her own small scale interpretations. This creativity is entirely self-motivated and driven by her desire to grow up to be an artist herself, so she too can tell stories through images.

Raffles tends to be more into creating pictures with words, so leaves the graphics to his baby sister. But Street Art still enthrals him and he deconstructs the pieces he sees as he searches for the stories behind them. But where street art has really fired up my socially responsible little man is in his understanding of the difference between crime and freedom of expression.

He is angered by graffiti and vandalism but falls into raptures over a perfectly executed art piece. He has learned to interpret the art he sees and the messages behind many works, recognising that many of the artists (Adnate is one of his favourites) use their skills to draw attention to Indigenous, environmental and social issues.

Both have grown fond of the Demetri Martin quote, “The earth without art is just, eh” and love discovering art in each new city we visits. Our own city of Sydney is littered with artworks, and the kids have been blown away by Toowoomba’s painted walls, combed Melbourne on the hunt for its creative best, and been left awestruck by masterworks in cities like London, Hong Kong and Singapore.

But then Dunedin came along and unexpectedly became their new favourite street art destination. Indeed, so enamoured were they were with the quality, and quantity, of the creative city’s art scene that they were up at the crack of dawn each morning in their efforts to spot every one of the almost 40 whimsical, whacky and wonderful artworks by brilliant local and international artists that adorn its walls.

While I’m not going to share all 40 of them, here, in no particular order, are the kids 15 favourites from the Dunedin Street Art Trail… 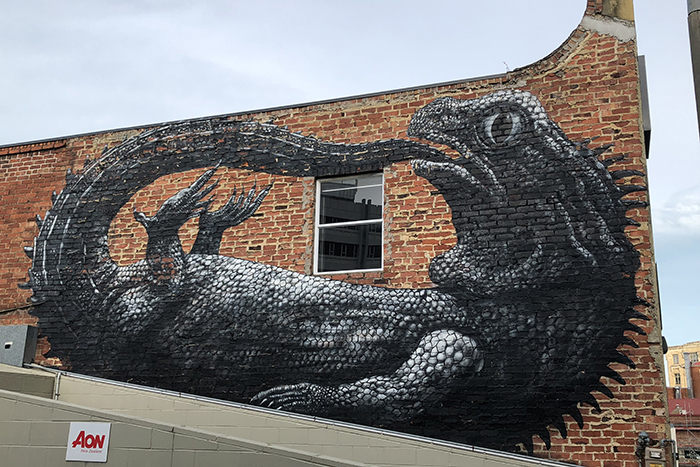 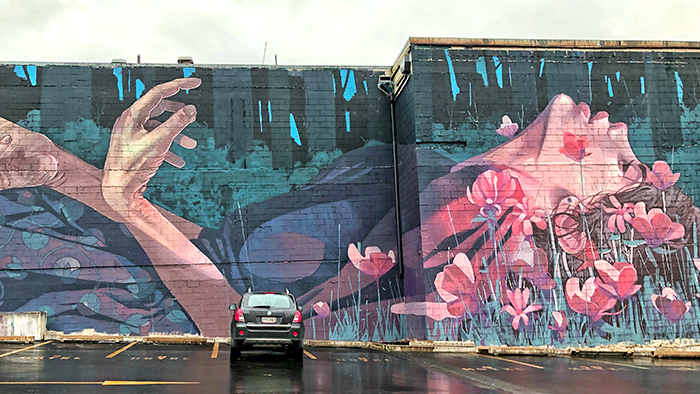 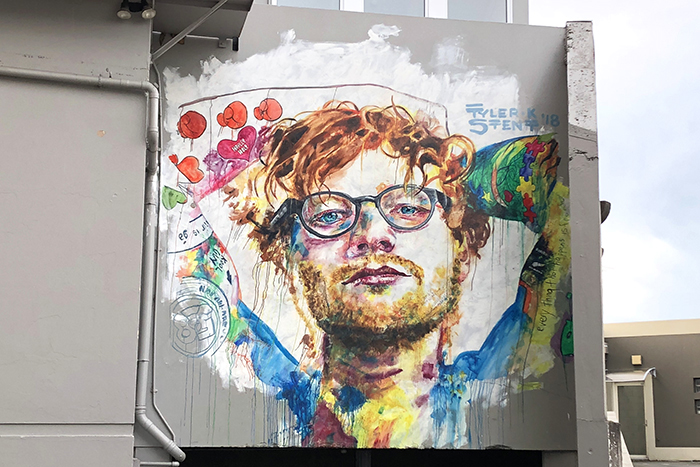 “I’m not that big a fan of Ed Sheeran. I mean, he’s talented and all but he doesn’t rock hard  enough for me. But I loved this portrait because it really does rock and I could have stared at it for ages” – Raffles

4. Love is in the Air, Natalia Rak – Bond Street 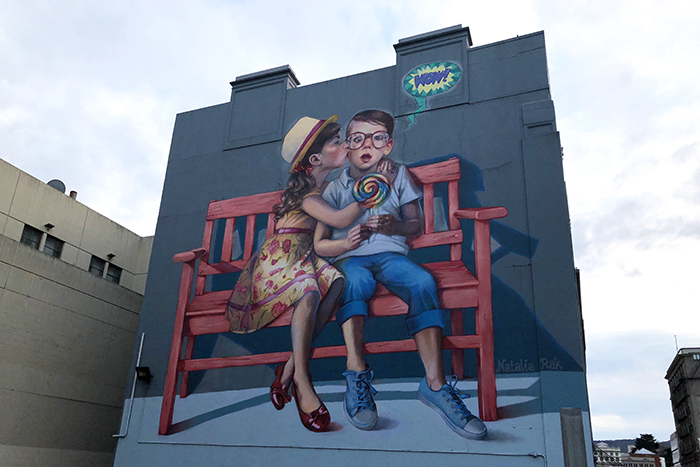 “I liked this one because it was cute and I wanted to lick that giant lollypop!” – Sugarpuff 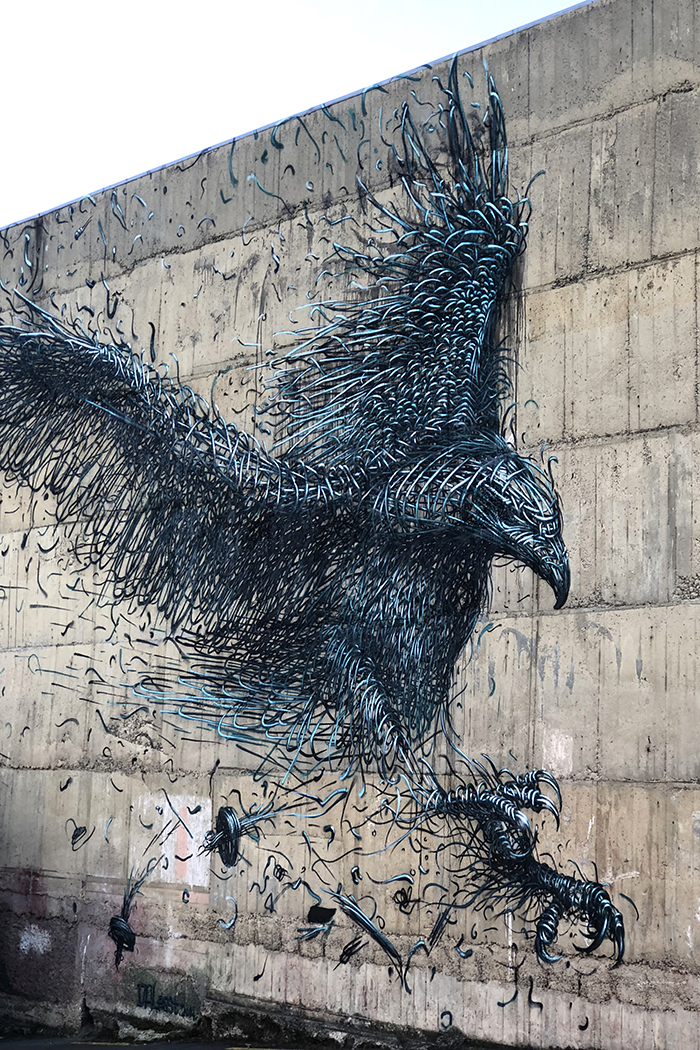 “The painting of an extinct native eagle was my favourite of all the artworks we saw. Not only because it’s such a genius painting but because it appears to be disintegrating, which I guess is symbolic of what will happen if we don’t look after all our other wildlife” – Raffles 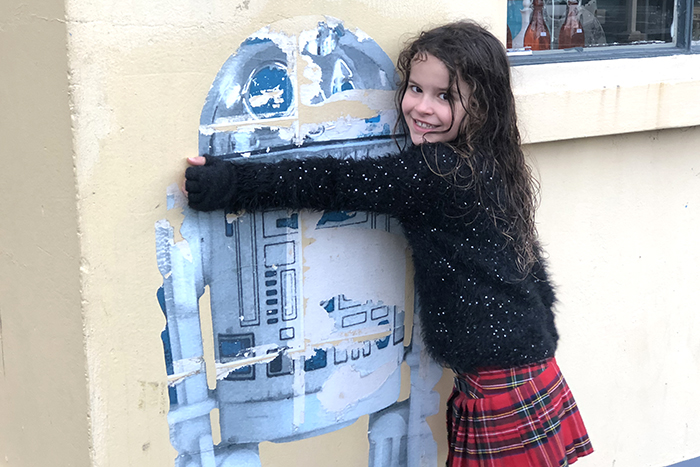 “I love R2-D2 so much I had to give him a cuddle. This one was a different style and was stuck on the wall and I want to try something like this at home, though mum wont let me do it on an actual wall” – Sugarpuff 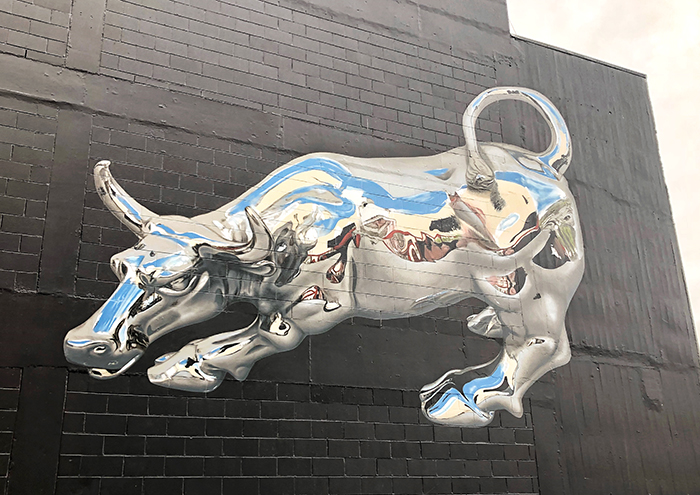 “Every time we drove down Dowling Street  I saw this epic silver bull. It was so cool and looked like molten metal and is definitely in my top three” – Raffles 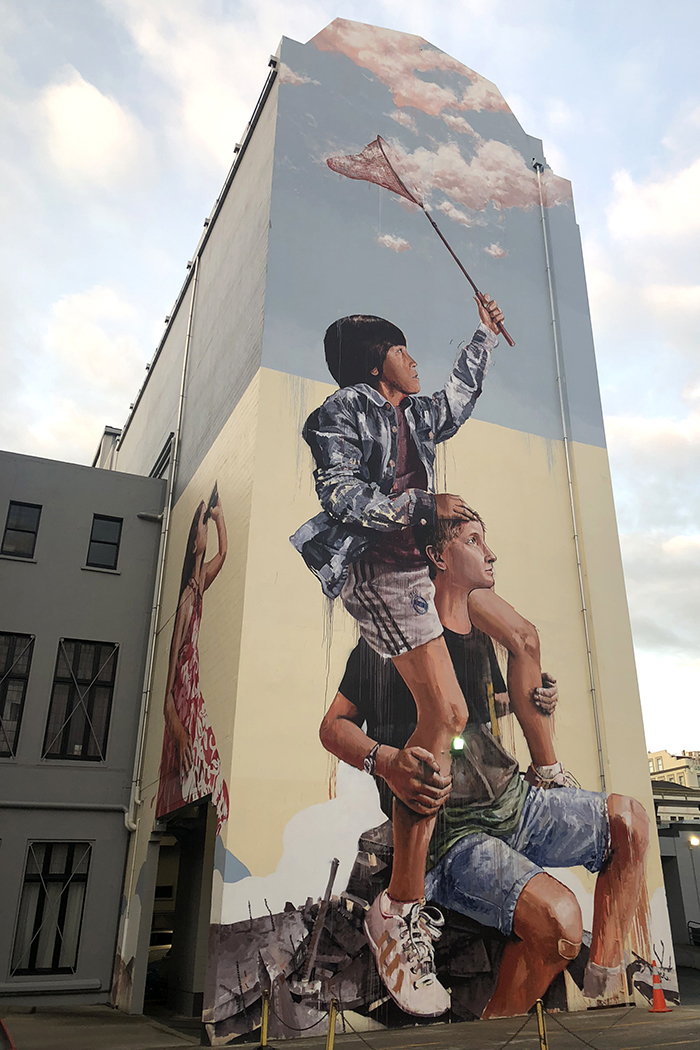 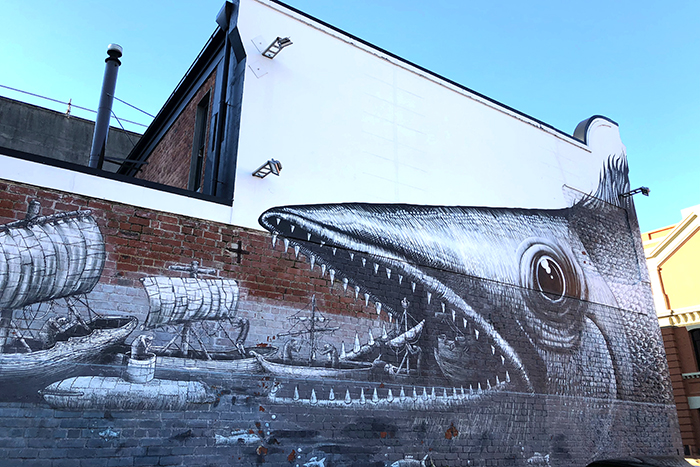 “This is by an artist called Plhegm who’s paintings I really loved. The Maori boats are coming from the fish which is a bit weird but something about this picture makes my imagination go wild” – Raffles 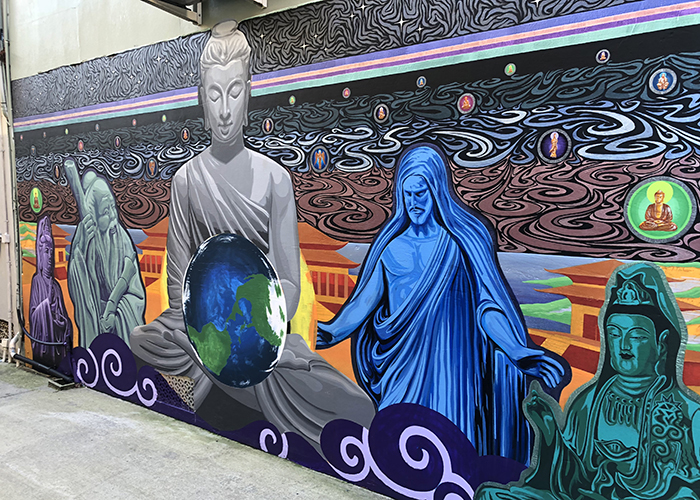 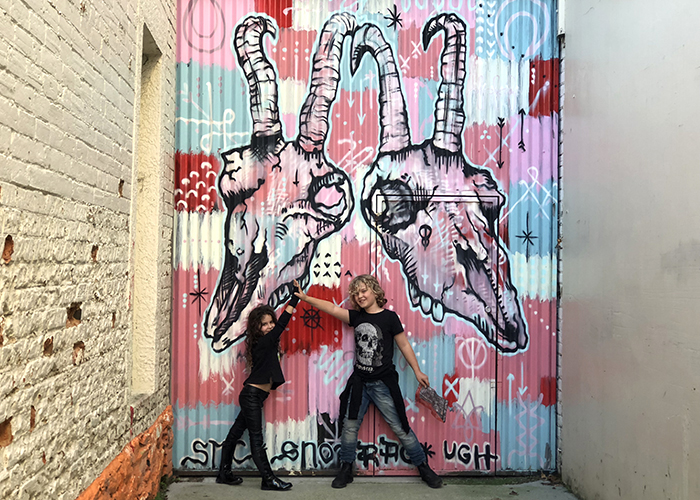 “This painting is so rock and roll and kind of tribal too. I don’t know why I like it so much. I just do. Plus the guy who painted it is called Snotrag, and that’s awesome!” – Rafferty 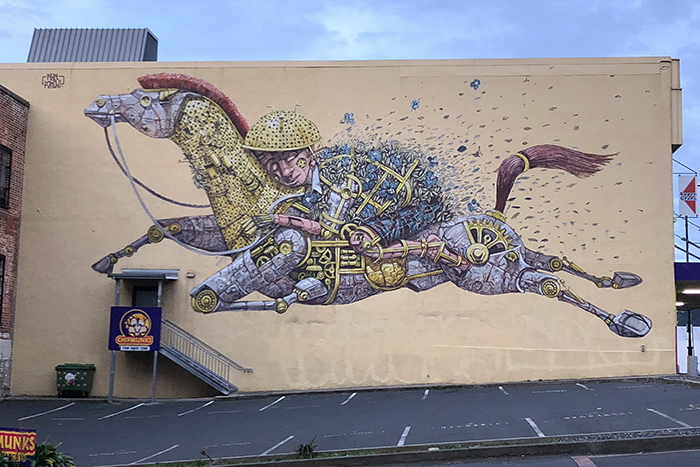 “This robot horse guy was epic. I really love the style of how it was painted and I wanted to jump on and ride it” – Sugarpuff 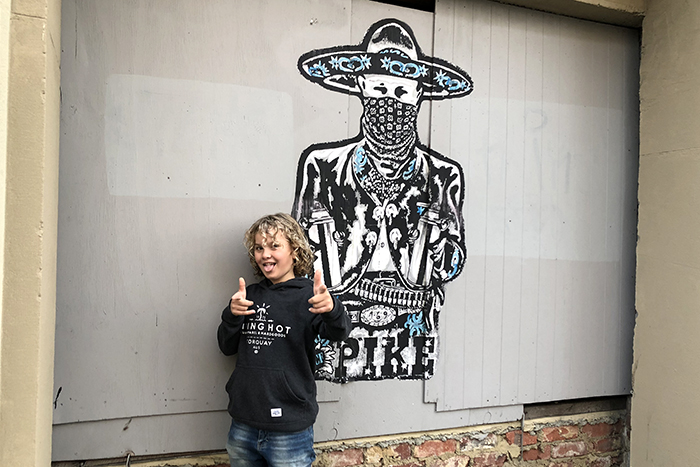 “I spotted this cool cowboy stencil as we were walking to the station one morning. It was cool because it was a little different to some of the other stuff we saw” – Raffles 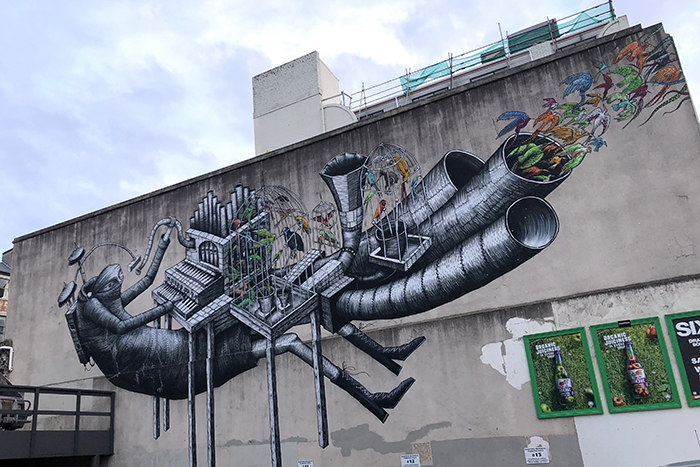 “I like this because I play keyboards and because it looks like the guy is farting birds. But I also like it because I want to try and draw in this style with ink and colour” – Sugarpuff 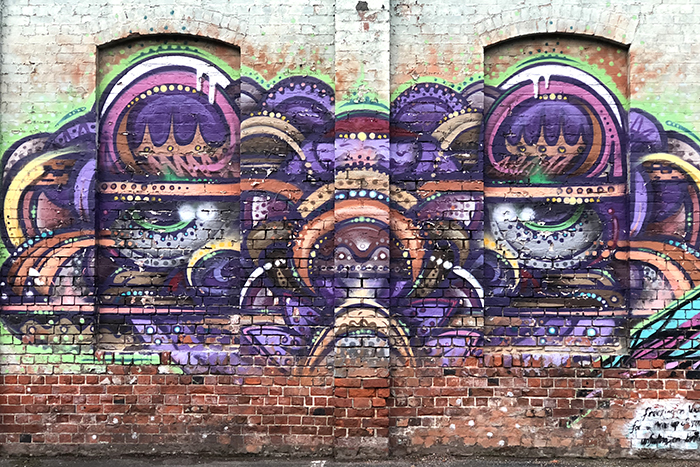 “This purple people eater looking dude looks space age and yet kind of ancient at the same time. I like that” – Raffles

Disclosure: While The Eats Worlds were guests of Enterprise Dunedin, all opinions, pavement pounding, street art hunting and artistic interpretations were made at our own discretion.