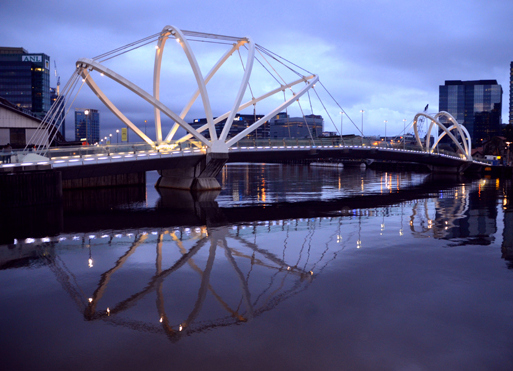 As mentioned in a recent post, the Eats Worlds have a bit of a thing for lovely Melbourne (which admittedly mostly involves consuming copious amounts of food). In that post I lamented (read: whinged about) the fact that a visit would be unlikely anytime soon and there was much wailing and gnashing of teeth.

But the Gods of travel and gluttony, who are clearly avid readers of this blog, spoke unto us, “What are you waiting for? Get your sorry backsides down to Melbourne, and haveth thyselves a most splendid time”. And the ones they call the Eats Worlds, for that is their name, did as they were bid and flew south to feast on the beasts of the field… and hot chips… in Melbourne town. And there was much rejoicing.

OK, so it didn’t quite go down like that but, as luck would have it, the opportunity did suddenly arise (through work) for us to enjoy a weekend of gluttonous gallivanting in Melbourne and who are we to spit in opportunity’s face? Especially when that opportunity involves a stay in a sweet suite at the seriously sexy Hilton South Bank. This hotel is a stunner! As is our two-bedroom suite with views down the river and over the city. 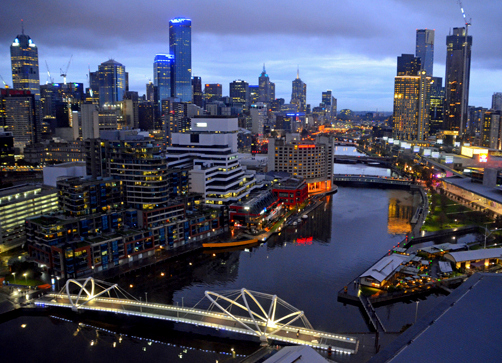 There’s a kitchenette (which I view with a little distrust… I’m on domestic leave), a dining area, a lounge area plus two massive bathrooms that, had we a cat on hand, we could most certainly swing in. In fact, it’s so nice I’m tempted to stay here all weekend with my feet up and a bottle of something bubbly but alas, we have children. 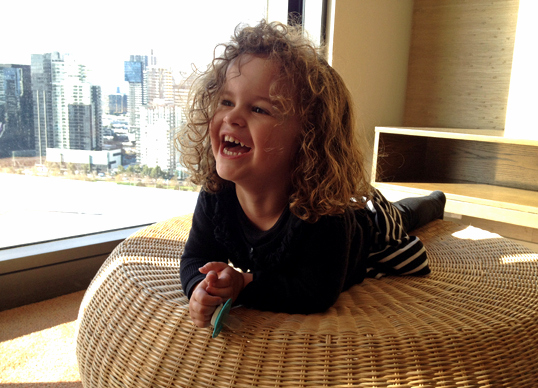 Happily, the Hilton South Wharf has taken them into consideration too. As part of our “Family Fun in Melbourne” package there’s a family pass to visit the Polly Woodside Tall Ship and Museum, so out we head for some fun of the nautical kind. But not before we stuff our faces at the très hip Boatbuilders Yard where Mr Eats World & I battle Raffles for a plate of spicy pulled pork with grilled corncakes and he and Sugarpuff nosh on piles of crispy fish and chips. 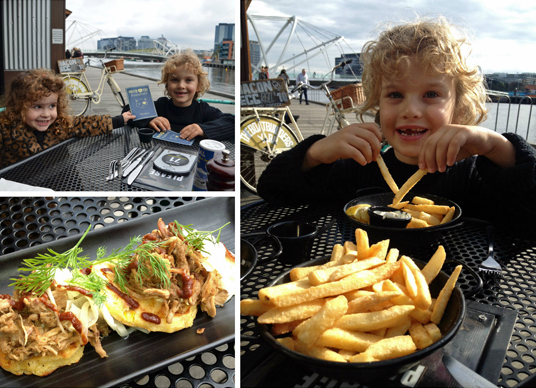 Bellies sated, for now, we head off to relive the fascinating voyages of the 129 year-old merchant ship in the Museum. As luck would have it, we’ve timed our visit right in time for the kids to sign up as crew members. When they’re not terrorising passing strangers with canon fire, they’re made to scrub the decks. 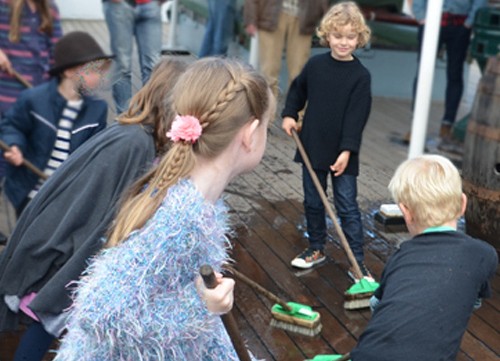 Awesome! I plan to take full advantage of this useful piece of training once home to further ease my domestic duties. With the rest of the afternoon to enjoy we jump on a free City Circle Tram to Federation Square, where we spy Lord of the Fries and stop for a fried potato refill before heading to the Australian Centre for the Moving Image (ACMI) where we are greeted by an enormous giraffe’s bum. Inside awaits its head, a hungry warrior panda, several recalcitrant penguins and a huge amount of fun at DreamWorks Animation: The Exhibition. 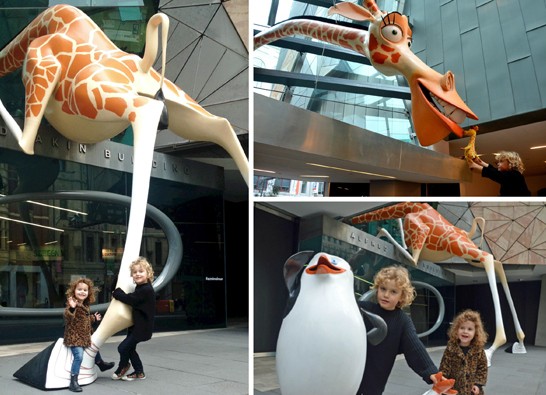 As the sun goes down we stroll back to the Hilton South Wharf. 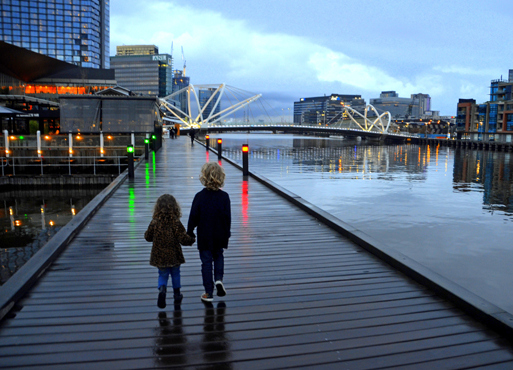 And then it’s time for a roast dinner prepared by Hilton Melbourne South Wharf’s Executive Chef and served in-room. And this ain’t no ordinary roast, folks. No, this is a whole chicken stuffed with fragrant herbs and surrounded by delicious seasonal vegetables, roast kipfler potatoes and a gourmet salad. There’s enough food for the average family of ten… so just about enough to fill Raffles. 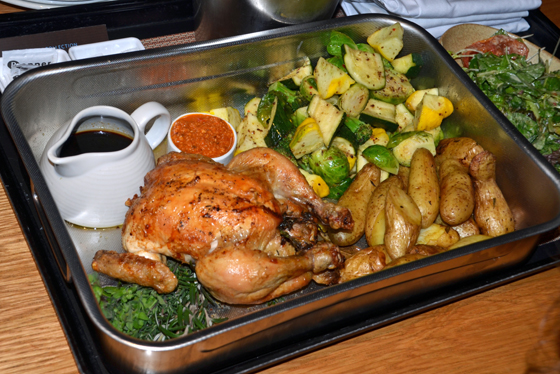 Post dinner we stuff the kids in their PJ’s and snuggle up on the couch to watch a recent release kids movie from the in-room collection (another cool part of the package) when there’s a knock on the door and room service delivers wads of fresh popped popcorn for us to nibble on… just in case anyone is still hungry. Raffles, of course, is. Always.

This is the point where things go a little pear shaped because our kids choose the Lego Movie which, while admittedly clever and entertaining, is accompanied by a soundtrack. That soundtrack includes “Everything is Awesome”, quite possibly the most annoying song ever written. This song has wormed its way into my head and is making me twitch. I doubt, without undergoing a full frontal lobotomy, it will ever leave.

The kids, realising the effect it has on their mother, have been singing it pretty much every waking moment since. Arses!

While I have to say in the song’s defence, that at the Hilton South Wharf everything IS most definitely awesome, next time we’re making the kids watch something a little less disturbing, like the Texas Chainsaw Massacre. At the breakfast buffet, which incidentally is one of the best we’ve had in Australia, I order fresh cooked Eggs Benedict, which Raffles demolishes. I get pancakes. He eats those too… and my mushrooms, bacon and perfectly poached eggs, fruit and pastries. Meanwhile I enjoy the tea. Hmmph! Eventually we convince our little compactus that “all you can eat” is a suggestion not a command and we roll him out to see a little more of Melbourne. 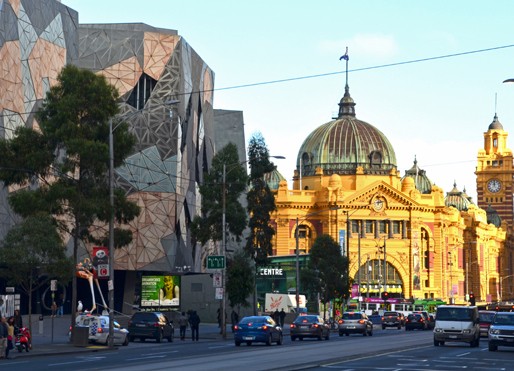 We cruise down Hosier Lane to check out the colourful art and graffiti that my street art sweethearts art love so much. 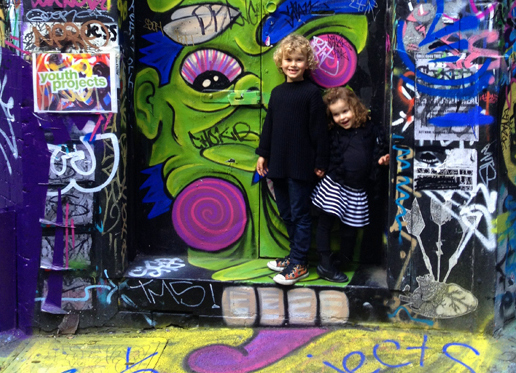 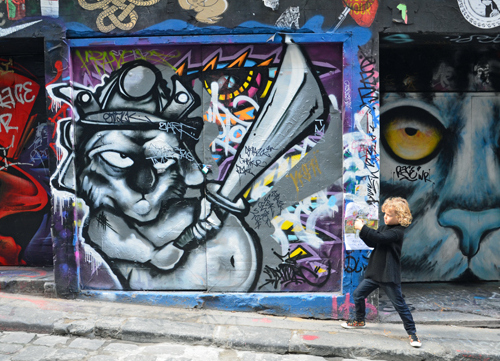 Continuing with the arty theme we walk the short distance to the National Gallery of Victoria where the kids are as enthralled by the gallery’s wall of water as they are the artworks! Sugarpuff is in technicolour raptures over a bunch of psychedelic feathered bears adopting flamboyant poses. Now before you stage an intervention, I’ve never touched LSD in my life and the mushrooms we had for brekky, while tasty, weren’t magic. It’s an art instillation, people. And it’s kinda glam. 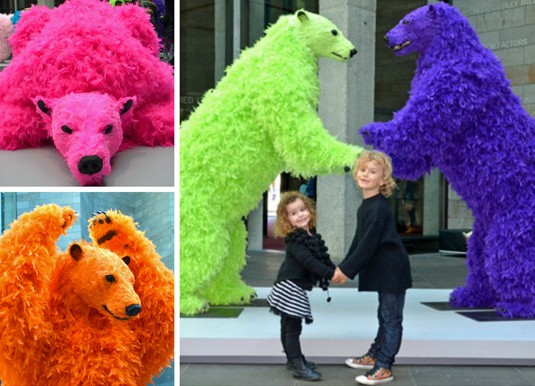 Raffles, ever the show pony, prefers becoming part of the installation at Pastello: Draw Act!, where children are encouraged to create their own art using crayons on helmets, shoes and cutlery. 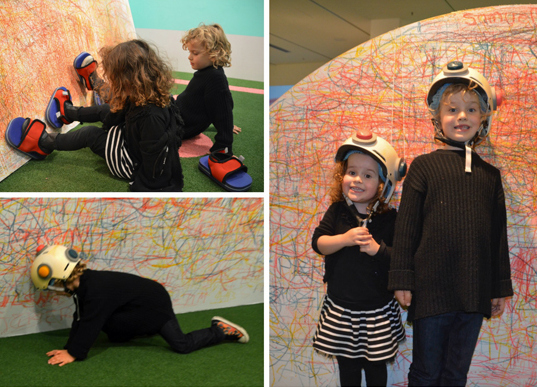 I even manage to sneak in a quick visit to the NGV’s Italian Masterpieces exhibition before my children’s hummingbird sized bladders throw a spanner in the works. And so we farewell our artistic sides and instead head to the utterly awesome Movida to do what we do best – eat. And there is much rejoicing. Yay Verily. 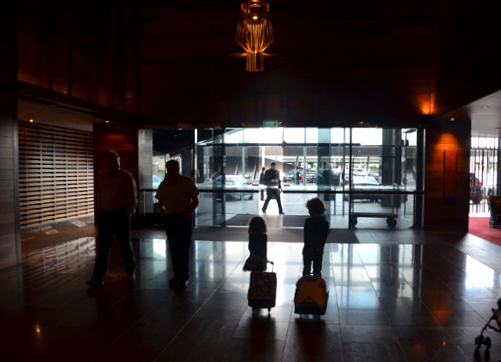 13 Comments on Going glam with the fam in Melbourne