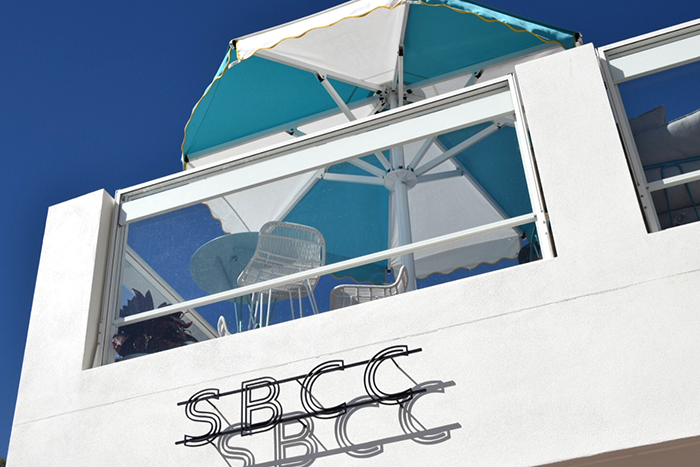 We’ve just spent a weekend up at Port Stephens, one of our favourite spots for filling our pants with sand and leaping into the ocean, like a boss. There are so many great beaches and rivers and we love the epic dunes that you can ride camels along, sand board down or quad bike your way around. But what I didn’t realise about Port Stephens, until this weekend, is that you can also spent a whole weekend just shovelling awesome food in your face until you have to be rolled home. 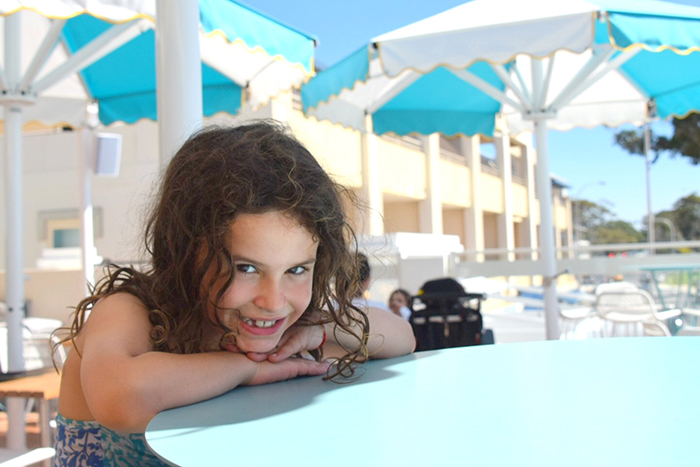 The Shoal Bay Country Club is a really historic place in the Port Stephens area. It’s like a gazillion years old or something but looks really new because it recently had a big makeover. Mum says they spent six million dollars on it. That’s a lot of money. I mean could you imagine how many dumplings I could buy with that kind of loot?

Now, I’m not really sure how it used to look in the old days but it looks pretty wicked now. It’s all white and open and airy and just being there made me feel like I was on holiday. It has an awesome atmosphere and everyone seems really happy, or a bit tipsy. Or maybe that was just my mum. 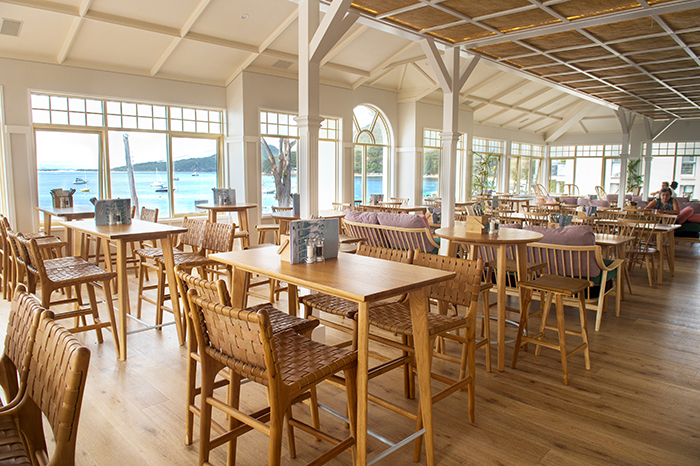 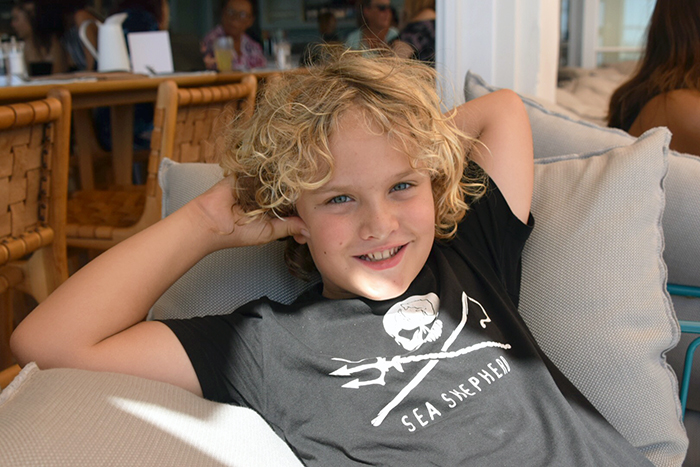 They even have cool bands playing at night. When we were there a band called Spy V. Spy played. I hadn’t heard of them but Mum got excited because she’s really ancient and used to see them when she was young, like 100 years ago or something. They were pretty cool too. They rocked almost as much as me. Just kidding. Nobody rocks as much as me.

There are a few bars but obviously given I’m only 10 I wasn’t allowed to go to those. Not that it stopped me knocking back a passionfruit mojito (virgin, of course). 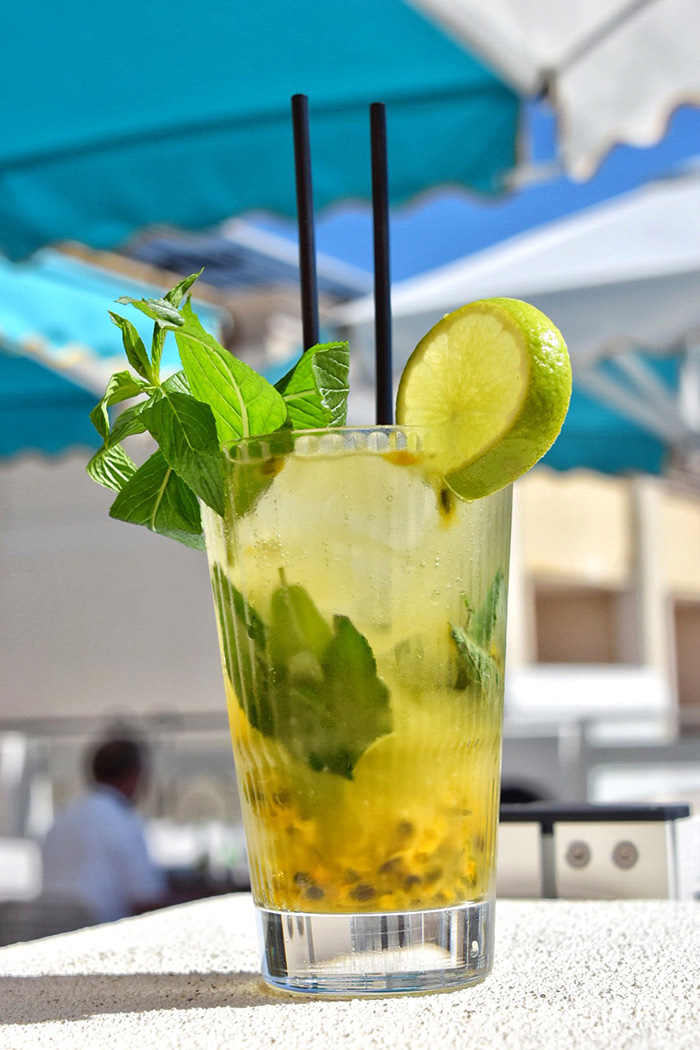 And I did try out both the restaurants, The Kitchen and Patio and Mermaids, both of which were ah-ma-zing!

Mermaids is the place for breakfast and I was lucky enough to eat here several times. The place looks like a 1950’s diner, not that I ever actually saw a diner in the 1950’s because I was only born like 10 years ago, but it looked just how they look on TV and I thought it was pretty cool. 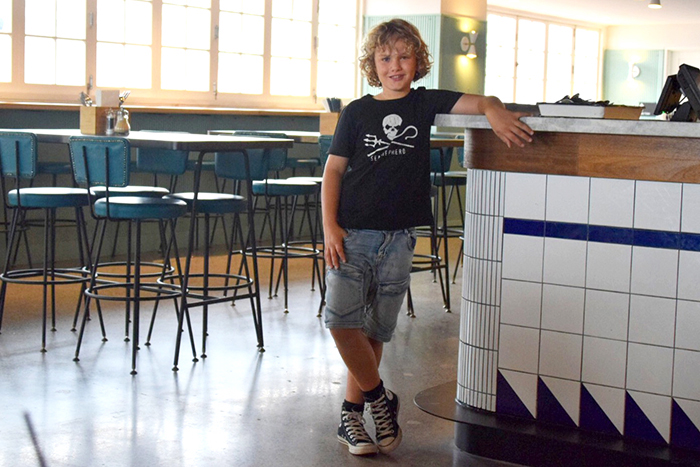 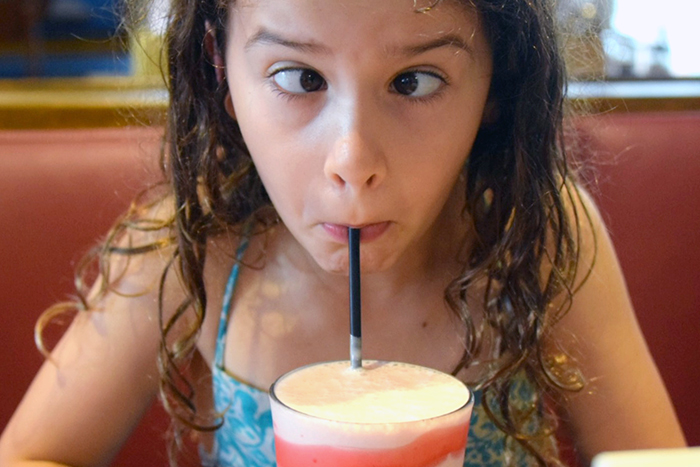 Dad isn’t really a morning person and he shoved his face in a double shot coffee and was making happy noises, so I assume their coffee is pretty good too.

I’m a raving fan of the Salmon Eggs Benedict. The hollandaise was so creamy and tangy and just spot on and the egg was poached to runny perfection. As far as eggs benny goes, I’d give this one a ten out of ten.  Even though I found it hard to resist going back for again the next day, I was in a bacon and egg roll kind of mood. But Mermaid’s don’t make any ordinary bacon and egg roll. This was a thing of breakfast beauty. 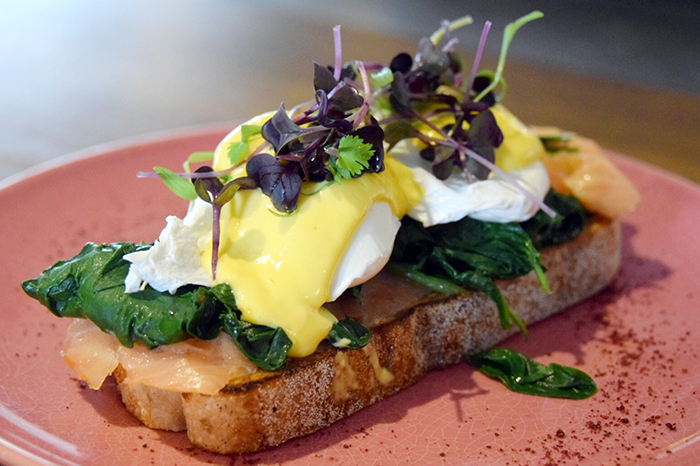 Made with a huge milk bun stacked with so, so much crispy bacon, a runny yoked egg, American cheese and the most amazing pickle aioli, this was the best bacon and egg roll EVER! 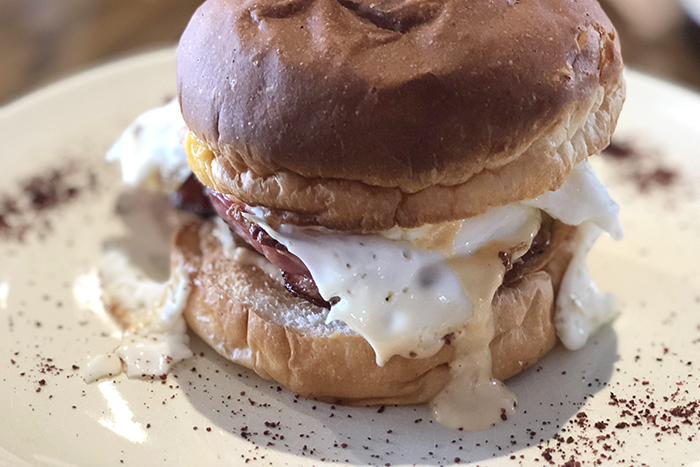 Mum was on some kind of mad health kick and passed on the bacon and benny. She went for the Acai Berry Bowl instead, and I have to say even this was a work of art, with stripes of fresh fruits, seeds and coconut on a frosty berry base. Yum. 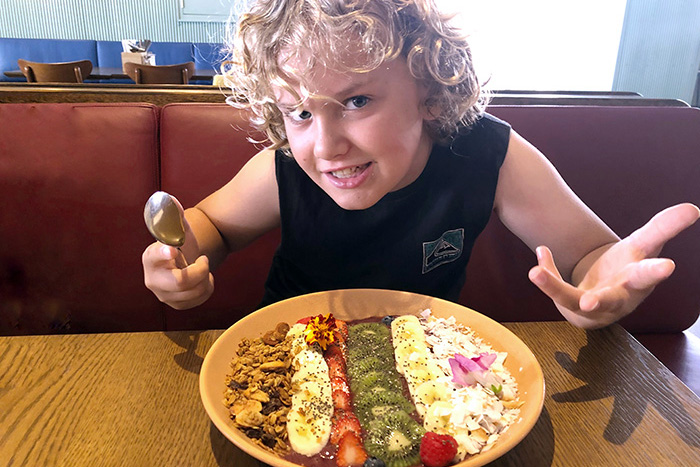 I got to eat lunch and dinner upstairs at The Kitchen and Patio. Twice. Which means I got to really taste my way around the menu, and there wasn’t a single bad thing on it.

Over lunch I chose the salmon ceviche, which was light, with a citrus tang and a lovely hint of chilli. 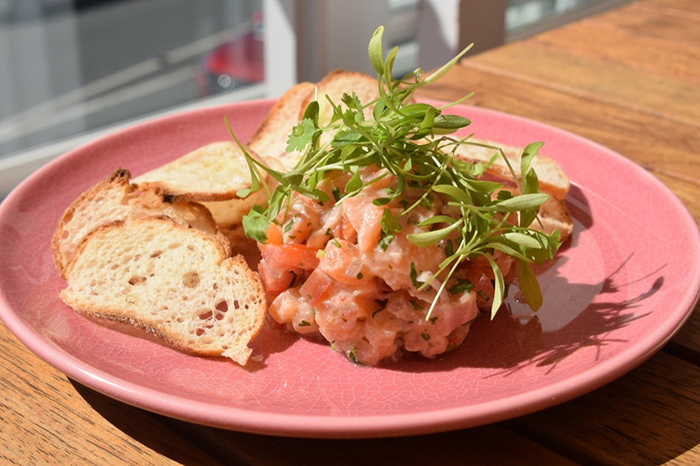 Except I don’t usually really do light so I ate half of my mum’s tiger prawn linguine
(with roasted tomato salsa, herb crunch, chilli, rocket and pecorino) too. It was so flavourful with a good kick of chilli, zingy tomato and a generous serving of prawns. 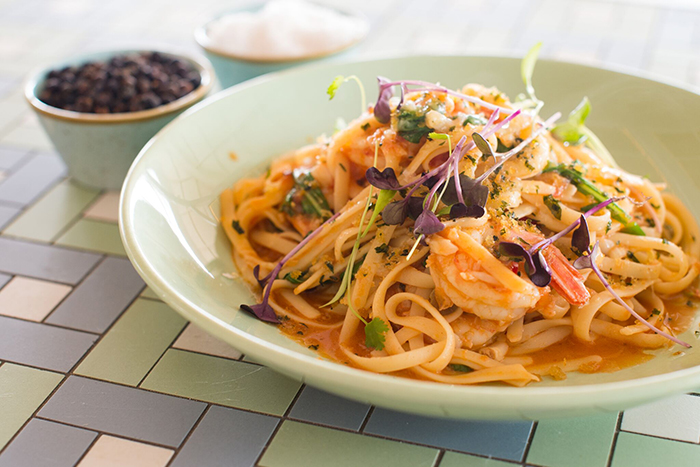 At dinner time, we really unleashed our inner piglets. We were with a large group so started the meal with a bunch of crispy based pizzas to share and they were awesome. The stand outs for me were the tiger prawn (with buffalo mozzarella and fresh basil), and the quattro Formaggi, which was packed with a zillion kinds of cheese (buffalo mozzarella, goats cheese, provolone and shaved parmesan) and blew my mind. 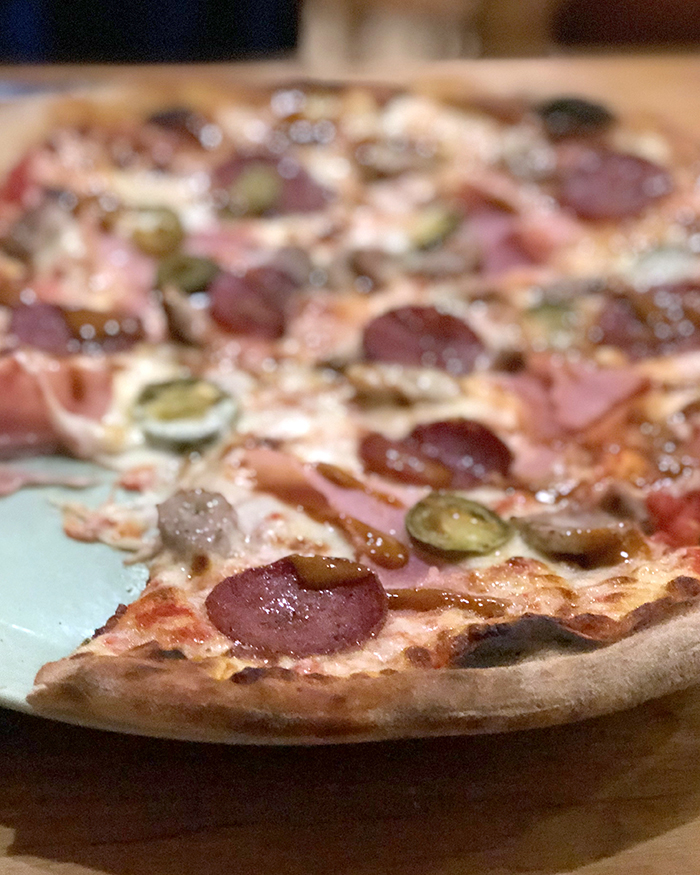 Most people would have stopped there, but they are lightweights. We ordered mains. The first night I stuck with the Italian theme and tried a burata salad that absolutely kicked butt. 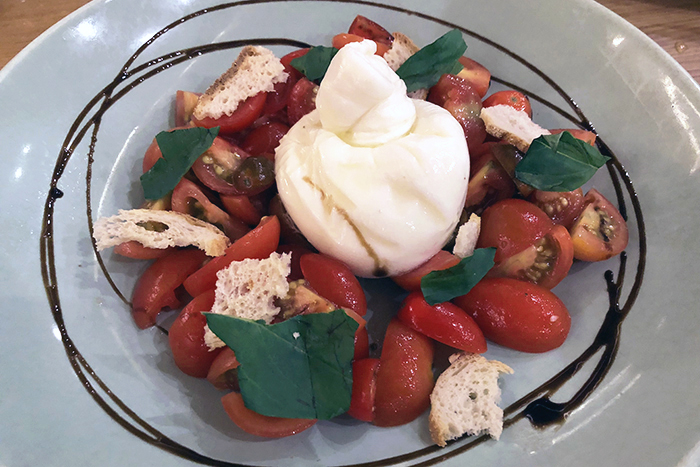 But that was just a middle course and I ordered a blue swimmer crab spaghetti (with cherry tomatoes, leek & spinach coulis, chilli, garlic and pecorino romano) with extra chilli as well. It was happiness in a bowl. Sugarpuff went for the mac cheese balls, which I ate half of, and dad was all about the giant plate of pork ribs. You know where they went. Yep, in my gob!  Amazing.

On the second night, we had another pizza fest, which I followed with a plate of Salt & Pepper Squid that was big enough to feed a family of ten. 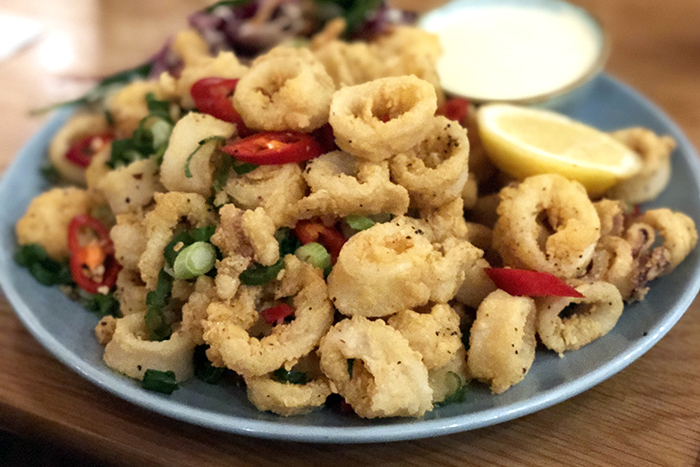 It was just the right size for me. I do need to point out that normal people should probably not attempt to eat one of these after scoffing three massive slices of pizza, but I’m not really normal so I also nabbed a bite or two of dad’s epic Wagyu Burger and helped mum finish off her perfectly cooked and flavour packed rib eye steak.

You know when you’re so full you feel like you might explode? Me either. But even pelicans have to stop somewhere so we skipped dessert on both occasions. But I figure that’s reason enough for us to come back here for another weekend, because the Shoal Bay Country Club just became my belly’s new happy place.

Reviewed by Raffles – Aged 10
(Bracketed comments by his mama)

Disclosure: Raffles was a guest of The Shoal Bay Country Club and Port Stephens Tourism but all gutsing, defamation of his parents, and opinions are, as always, his own.