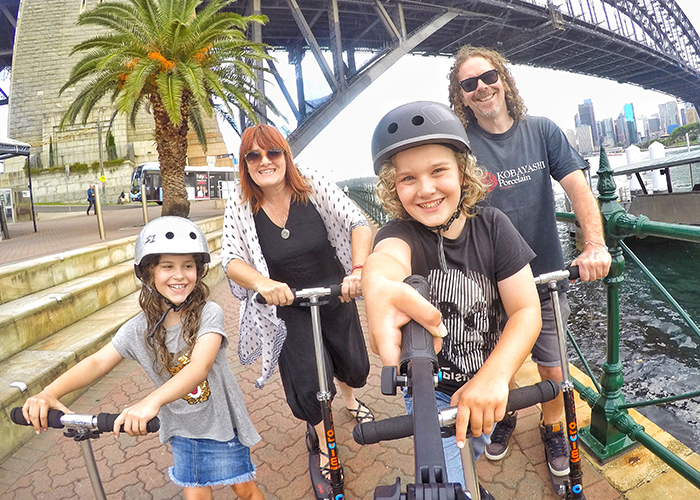 We’re big on getting a walk in every day here at Casa Eats World. And by we, I mean me. The kids would rather stick a rusty fork in their eye. Our evening walks were once a time to exercise and hang out together, but they were falling by the wayside as the kids started whining with increasing intensity that they were bored and started dragging their feet so much that our walks became a total nonevent.

Until a shiny scooter came to my rescue.

I never owned or rode a scooter until I had kids of my own, and then only to demonstrate my clumsiness and awesome ankle spraining skills. But both Raffles and Sugarpuff have been scooting since they could walk, with varying degrees of unnecessary risk and parental heart attack inducement. This particularly applies to my boy hero who seems to think his punky, flame strewn, fat wheeled Micro Rocket should live up to its name and spends half his time airborne.

But in my mission to stay active as a family I decided if I couldn’t beat them, and didn’t want to be left in their dust, I’d have to join them.

I’m now the proud owner of a sleek adult size Micro Scooter all of my own. And we’ve replaced our daily strolls with scoots. Only now it’s the kids who are the ones rushing us out the door. At least that’s what they think.

Because we firmly believe the family that scoots together, stays together, here we’re sharing 7 of our favourite places to scoot in Sydney. 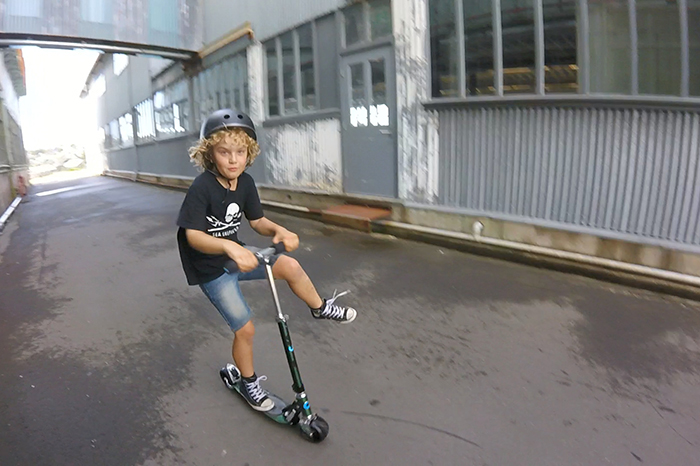 A former imperial prison, industrial school, reformatory and gaol, and the site of one of Australia’s biggest shipyards during the twentieth century, Cockatoo Island is one of the only city campsites in the world, but rather than overnighting we make the day trip to the scooter friendly island to speed up, down, around and through its awesome hills and tunnels.

Perched high on a hill overlooking Sydney Harbour, Observatory Hill boasts some of the best views of the city and is home to a grand sandstone observatory ringed by a pathway perfect for scooting! There’s also an outdoor workout station and best of all, it leads straight down to The Glenmore Hotel, where we can stop for a refreshing beverage or two on the ride home.

Extending from the foreshore of Long Bay west under the Cammeray Suspension Bridge to Flat Rock Gully Reserve, this park has a kilometre-long pathway for scooters (and bikes) that meanders its way past caves, rocks and bush. There’s also an awesome playground, loads of space to kick a ball around and a small rock beach to explore.

Another Sydney Harbour foreshore park, Barangaroo Reserve, on the western side of the CBD, offers gorgeous waterfront views with brilliant walking and cycling/scooting paths that lead to an array of awesome restaurants, pretty gardens and a grassy space that is simply perfect for a Harbour side picnic.

My beach babies love any excuse for a trip to the beach but the long, bump-free esplanade that stretches all the way from Shelly Beach to Queenscliff puts Manly Beach at the top of their summer bucket and spade list. The smooth speedy space combined with sea and sand mean they can scoot and swim in the same place. 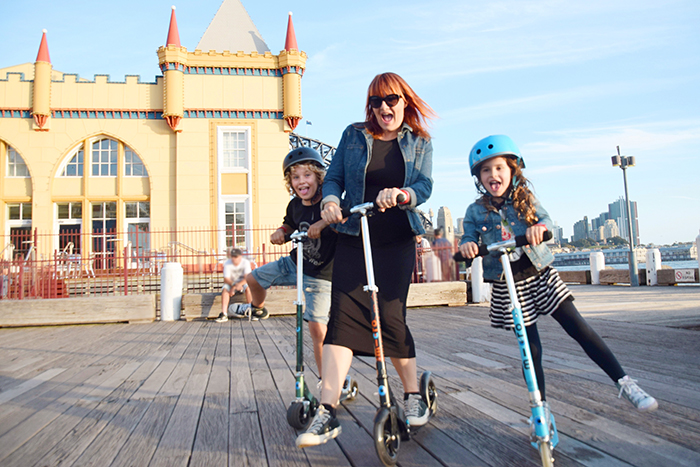 Not only is this one of Sydney’s prettiest walks, lined with gorgeous sculpture filled gardens and offering a dazzling perspective of Sydney Harbour, there’s a great playground at the end of end it where the kids take a scooter break, and on special occasions we can scoot in to Luna Park for a ride or two before wheeling our way home.

OK, so the kids asked me to add this one because I cannot bear to watch as they speed about and launch themselves off the ramps at what is Australia’s largest indoor action sports centre for skate, scooter & BMX. But their dad loves it too and I guess at the very least, when they go it gives me the opportunity to go on one of my beloved walks.

Now we just need to buy Poppa one for Christmas so we can go multigenerational on our daily adventures.

Disclosure: I’d like to thank Micro Scooters for generously gifting me my fabulous new scooter and giving us back our family active time, but all experiences with and opinions of them are our own.