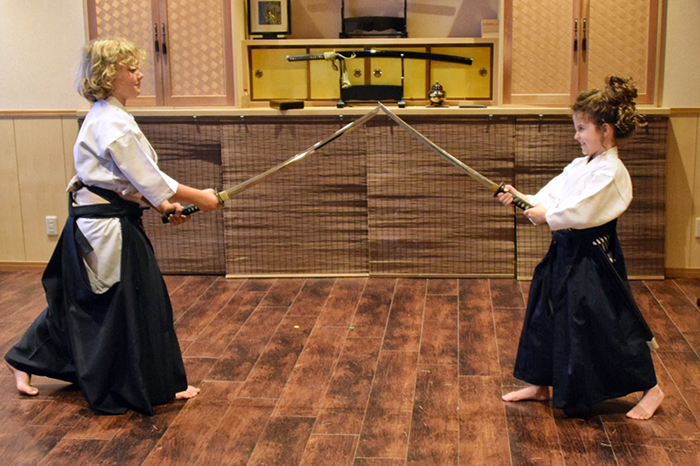 On this, our fourth visit to Tokyo, we’ve already managed to see, eat and explore a whole other side to the city, thanks to the awesome local knowledge of Inside Japan Tours’ Mark. Our detour into local life has left us more hooked on this cool, chaotic and quirky metropolis than ever before, and while Mark has shown us that it would take another ten visits just to scratch the neon-lit surface of all the things to do in Tokyo with kids, we’ve managed to cover a lot of ground. But before Mark bids us sayonara, he has one last lethal surprise in store. But we can’t talk about it because, you know…

Just kidding, of course we’re going to talk about it! Mark has kindly arranged for the kids and I to go full Samurai with a lesson in Battōjutsu or Batto, the Japanese art of swordsmanship. 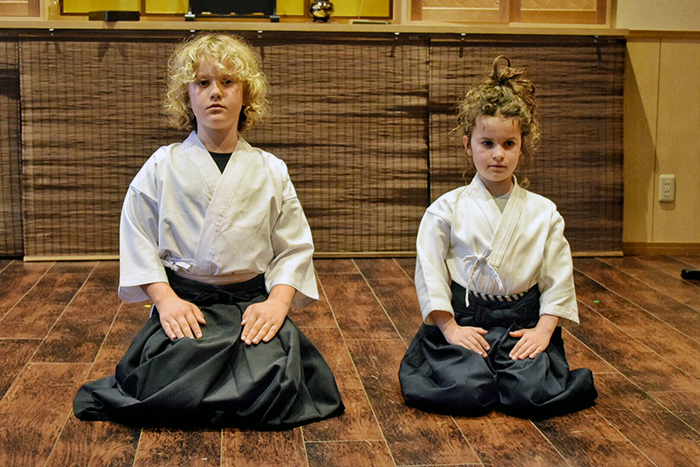 SO WHAT IS BATTO?

This is my kind of fight club. Especially the lack of fighting bit. You see, while our training utilises variations of techniques used by the Samurai, including some mighty fine cutting skills, its more about discipline, etiquette and respect than slicing anyone up Kill Bill style.

HiSUi TOKYO kits us each out in a traditional hakama and kimono before presenting us with blunt katanas. Now, at this stage I admit to being a trifle nervous, because blunt or not, my kids are savages with a sword and I’m somewhat afraid for my life. 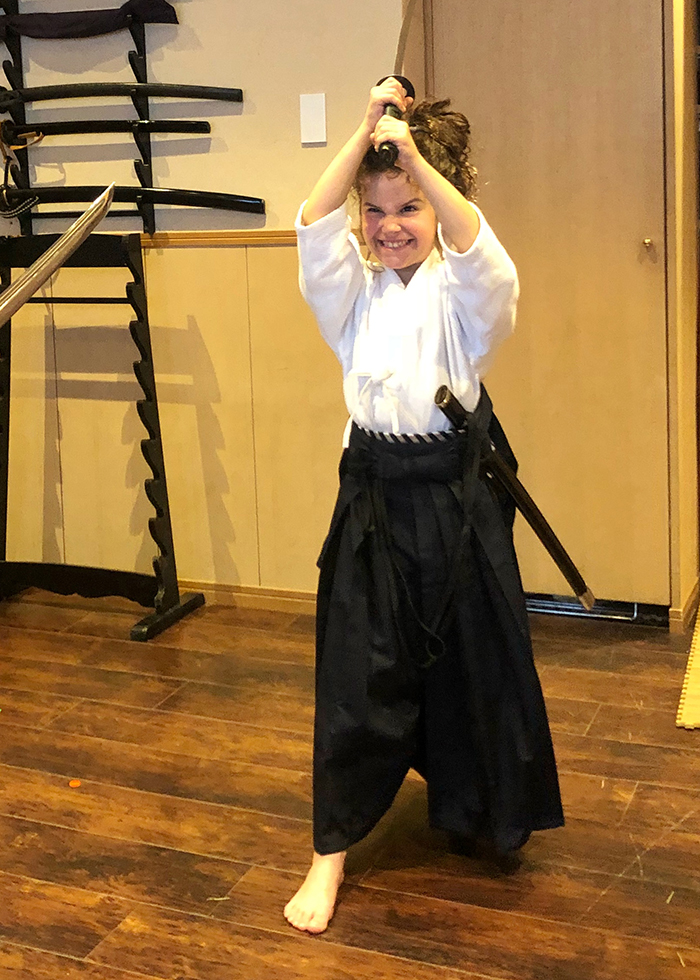 But in one of the greatest surprises of my life, instead of leaping about the room like out of control baboons, Raffles and Sugrapuff are under the Zen-like spell of our sword-master during this lesson in grace and motion. 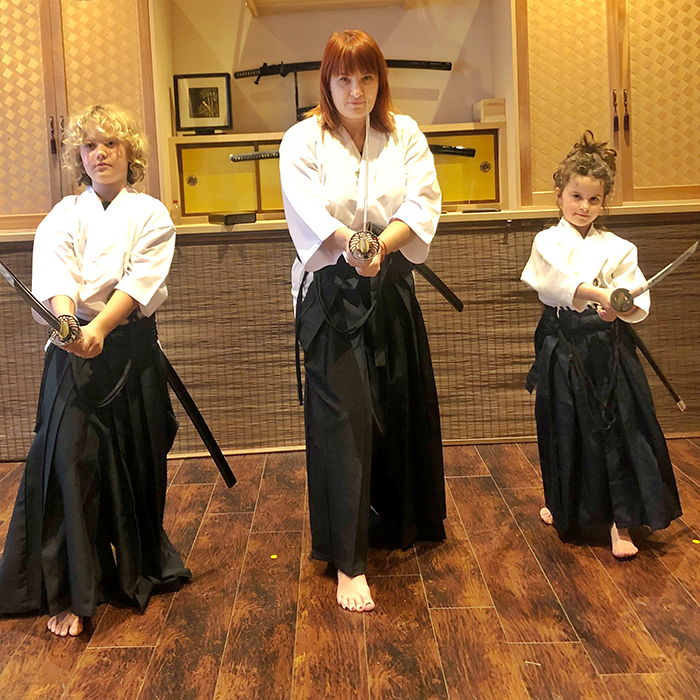 We each learn how to stand, how to move and how to draw and sheathe our weapons. It’s all quite formal. The kids learn fast. They are agile, calm and controlled. Me? Not so much. I am old, arthritic and creaky. As we undertake a formal kneeling sequence, my right knee lets out a hefty crack and though our only opponent today will be a roll of tatami matting, I think there’s a good chance it might overpower me.

Once we’ve learned the basic steps, turns, cuts and thrusts, our blunt katanas are removed to be replaced with the real deal. A katana so sharp and shiny that I suddenly feel like I’m being directed by Tarantino and look surreptitiously over my shoulder for anyone called Bill … just in case. But no, there’s only me and the tatami matting and, knee no longer pinging, I’m starting to believe I can take it out. Because, you know, I’ve got a lethal weapon in my hands and it’s, well, an inanimate object.

I lift the sword above my head slowly, and then sweep it down, the way I’ve been trained. But I barely scratch the matt and swear its laughing at me as loudly as my children.

The kids follow me, taking their turn with the deadly sword. 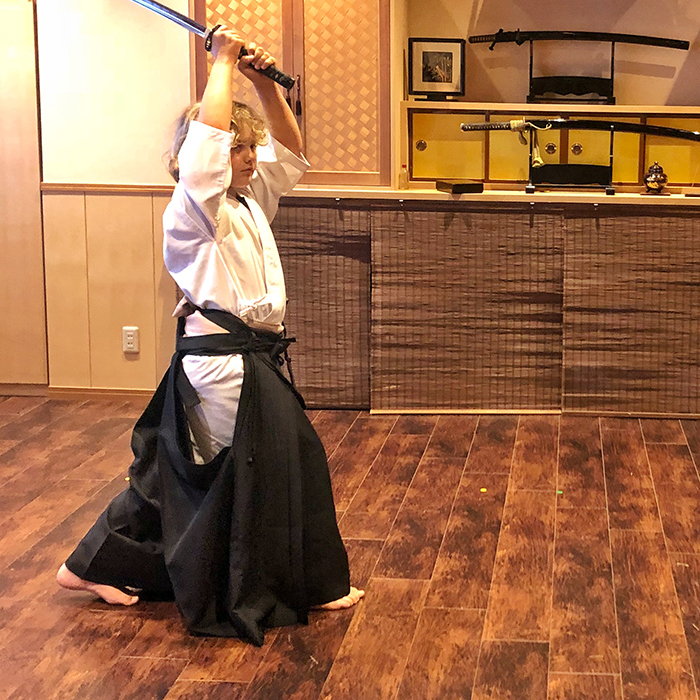 Raffles is up first, drawing his sword with grace before slicing the thick roll of matting in two with a single sweeping blow. Sugarpuff, with the careful assistance of our sword-master, follows suit. 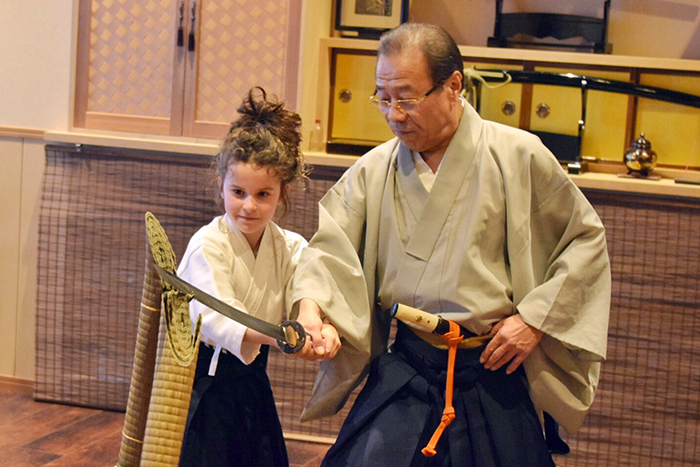 Yes, I have been bested by two primary school kids. And while the master declares them warriors, he offers me only the kind of pitying stare that suggests he thinks I should have stuck with the tea ceremony next door.

THE FIRST RULE OF BATTO…

But the first rule of fight club is we don’t talk about fight club, especially when we’re so crap at it, right? Only no one told the kids, so as I slink away back into the streets of Ginza, Raffles tells anyone within earshot that I am rubbish. Sugarpuff too nixes the silence, loudly declaring that if any Ninja Turtles happen to be listening and are looking for new recruits, she’s in. Just call! Booyakasha!

Disclosure: While we were hosted by the awesome team from Inside Japan Tours, all swordplay, arthritic knees and opinions are our own.