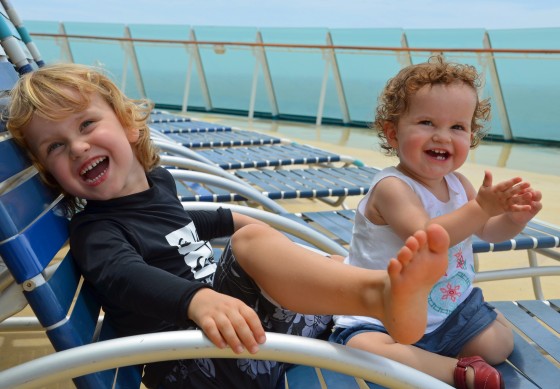 “Mama, I think it grew!” announces Raffles, stupefied, as we prepare to board Royal Caribbean’s Voyager of the Seas in Singapore. This isn’t our first voyage on this lovely lady but her enormous bulk is no less impressive the second time around.  In fact, I think we’d all forgotten just how buxom a beauty she actually is.

Now obviously the ship hasn’t actually “grown” any bigger (that would be a little too Transformers for mine, not to mention a tad creepy) I think she may just have gotten better… and she was already pretty damned awesome!

Cruising is fairly new to our family and I have to admit that our first time (last northern autumn) I’d been nervous! I mean, it was a cruise!  A giant cruise on a seriously cool mega-liner but a cruise nonetheless. And up until then more my grandmother’s idea of a holiday than mine! I’d imagined we we’re going to be trapped at sea with nothing but bingo and buffets to keep us entertained! Visions of a giant floating RSL club danced in my head as I imagined a kind of floating pastel purgatory.

My bad. Fortunately, like most of my paranoid imaginings, it soon became clear that my visions were bordering on the delusional. This ship rocked! In a good way.

It’s PERFECT for families. There is no denying that visually, especially when compared to the Venetian Palazzo we’d just checked out of, that our cruise ship was designed to appeal to the masses, and that meant a serious lack of velvet drapes, dark silk walls and antique furniture…  But, after exploring deck after deck of our floating hotel, I was a convert.  A day spa, multi-storey theatre, endless dining options, a zillion bars all serving perfectly good alcohol, three pools, kids waterslide and not a quoits set in sight all played their part in changing my perceptions.

And it has to be said that a big fat comfy bed to sleep in while in transit beats the pants off flying any day! This time we’re sailing from Singapore and we bound on board as Raffles is gagging to get back to the pool and waterslide that he became one with on our last voyage.

Barely have our passports been stamped and he is submerged for the afternoon and only the promise a very special surprise after dinner can remove my frisky little fish from the water in time for dinner. 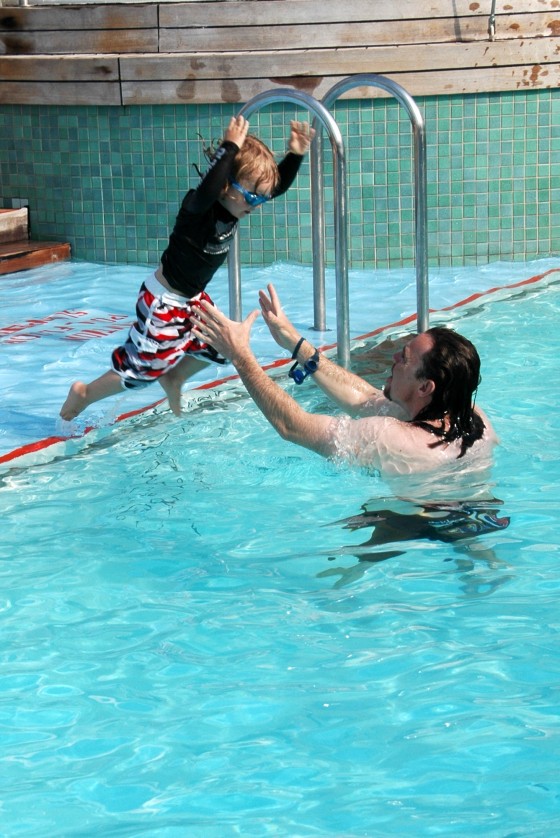 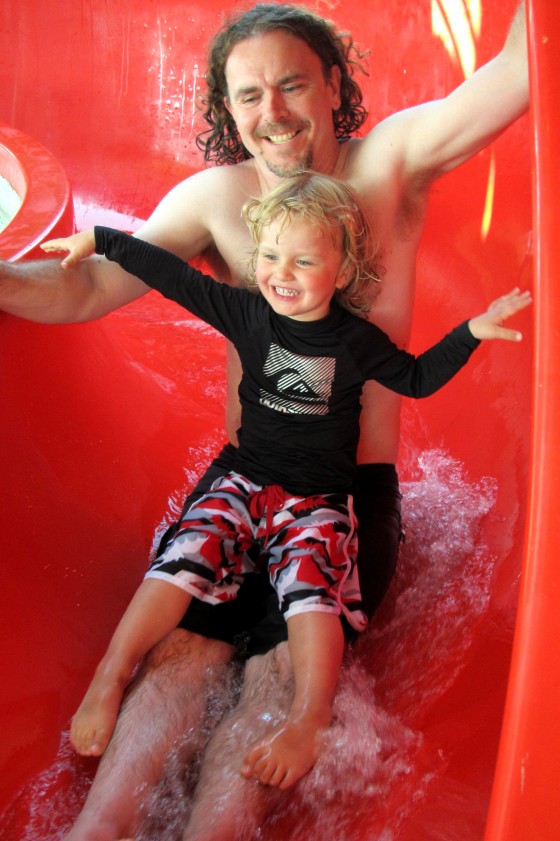 Our a-la-carte dinner is a rather fab affair and our waiter immediately becomes the light of Sugarpuff’s life as she flirts outrageously for the entire dinner…  an infatuation that continues for the next week as my little Lolita sends air kisses and winks his way at every opportunity. 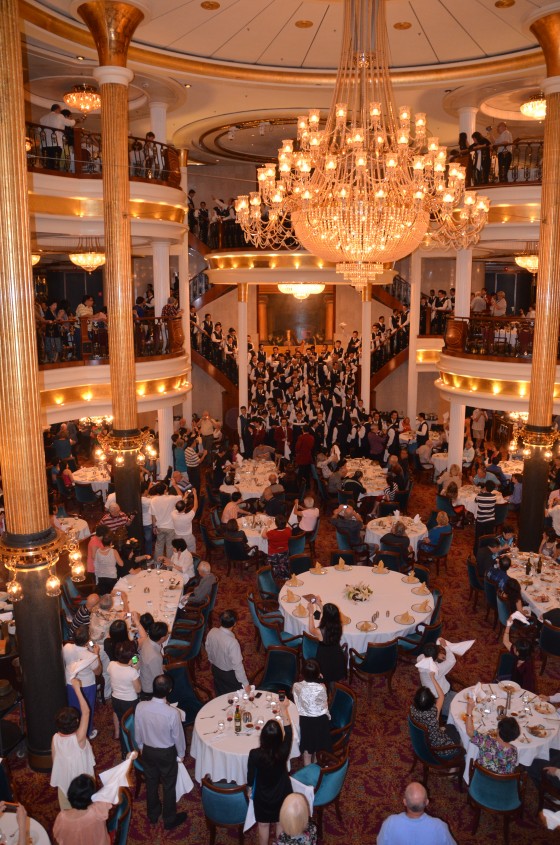 The food’s not bad either. Though a fairly comprehensive children’s menu is proffered, the choices are predictable and hold little appeal to our tiny travellerss. Happily, Raffles also has the option of ordering from the adults a-la-carte menu which is more to his epicurean style.  Sugarpuff, barely off puree, simply shares from our collective plates.

Not only does “dining out” every night for a week prove a fabulous way of introducing the kids to a world of new flavours, with selections catering to the multitude of nationalities on board, it’s also assisting my backside in growing ever more bountiful, but I digress.

“So, what’s the surprise?” asks Raffles as we head to the ship’s  Royal Promenade. He soon finds out as Kung Fu Panda, Shrek and Fiona, plus the kooky cast of Madagascar – Alex the lion, Gloria the hippo, those whacky penguins and nutty King Julien – parade march by in a flurry of cartoon chaos. 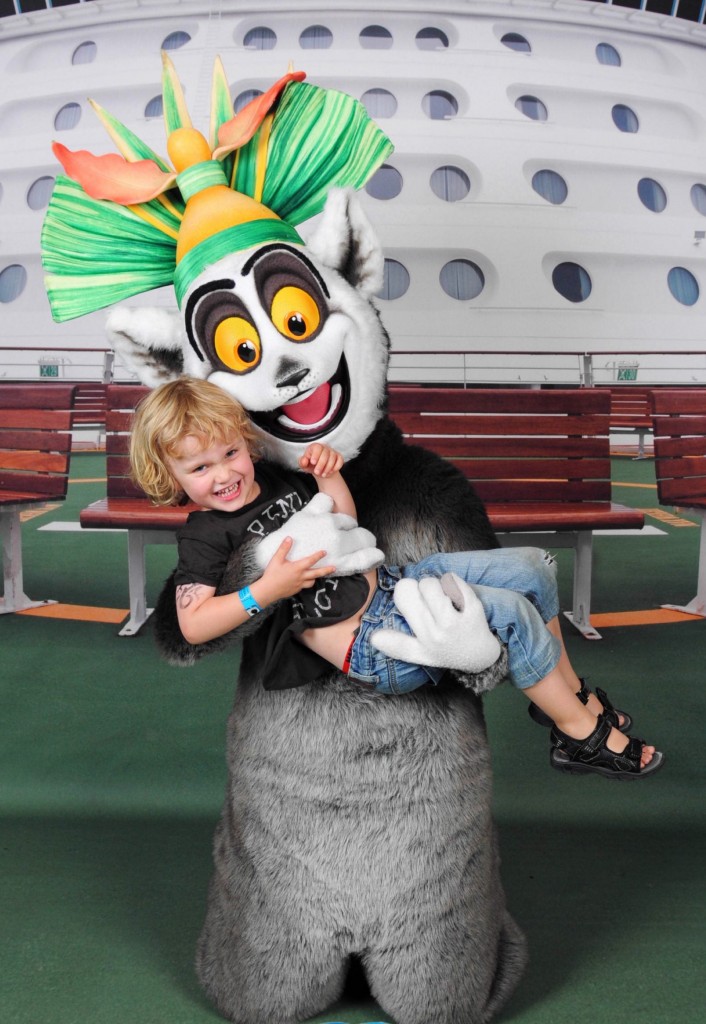 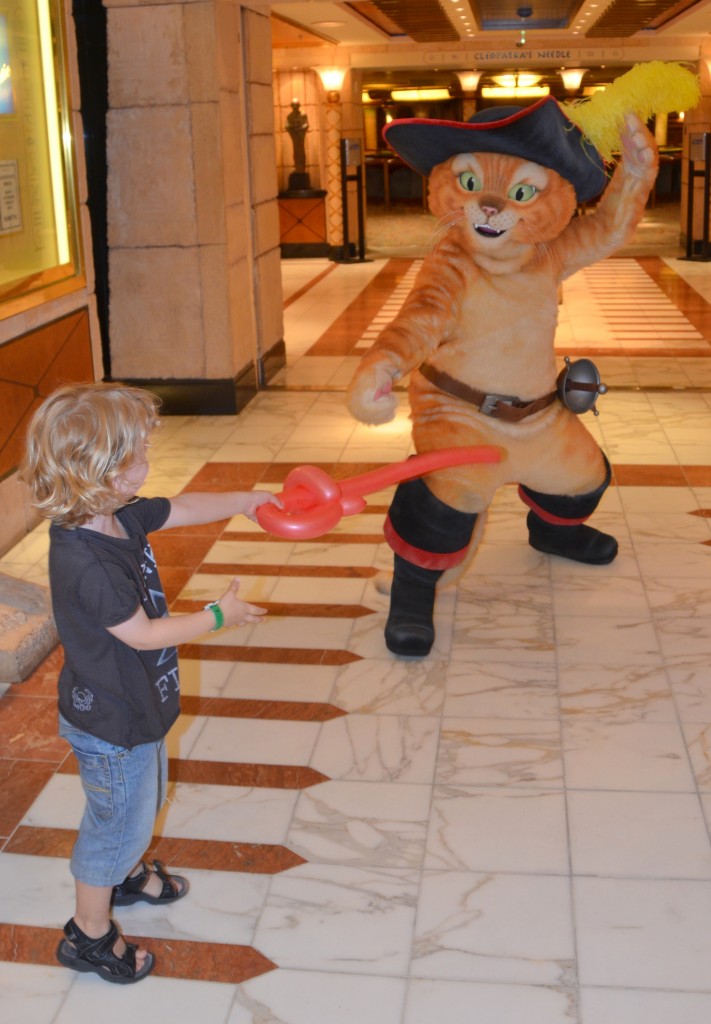 And there is more DreamWorks’ magic to follow with meet and greets, poolside dance parties and character breakfasts, where Raffles dines on Crackalackin’ Smoked Salmon Bagels and Chocolate Love Potions with his movie pals. 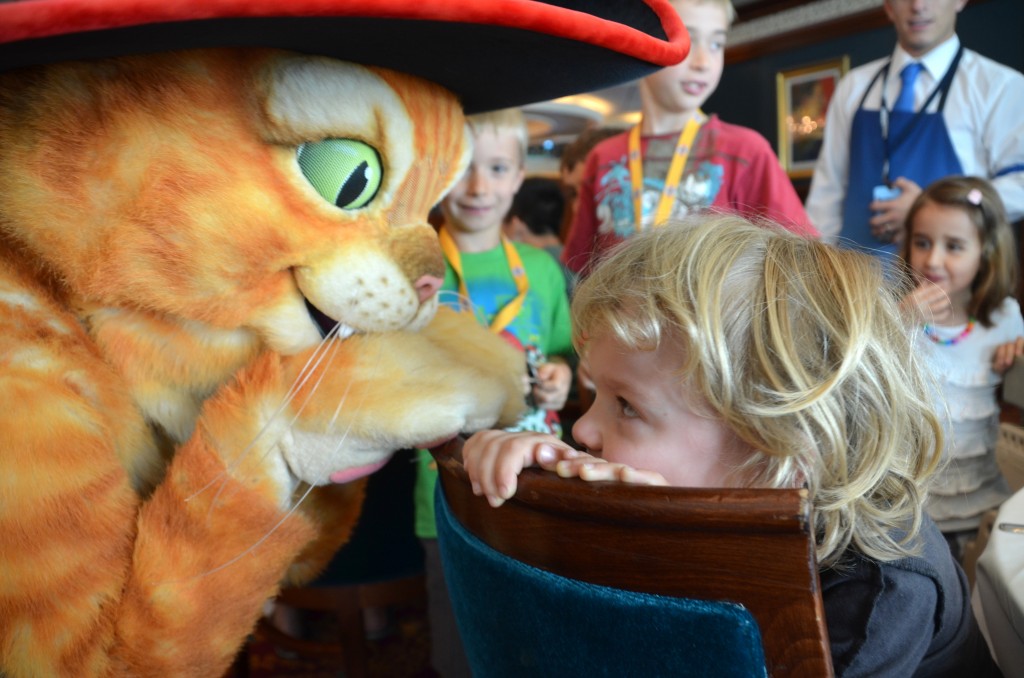 Sugarpuff, in a show of female solidarity, is more enamoured with Gloria the Hippo. 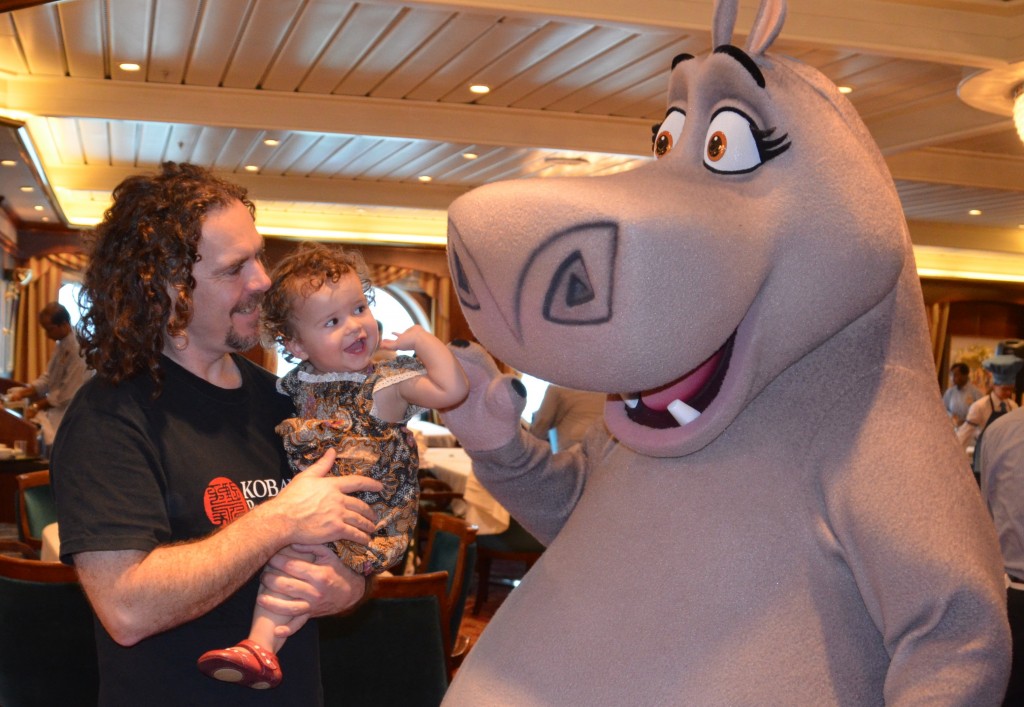 Raffles will be dining out for years on stories about learning kung-fu moves from the one and only Dragon Warrior. 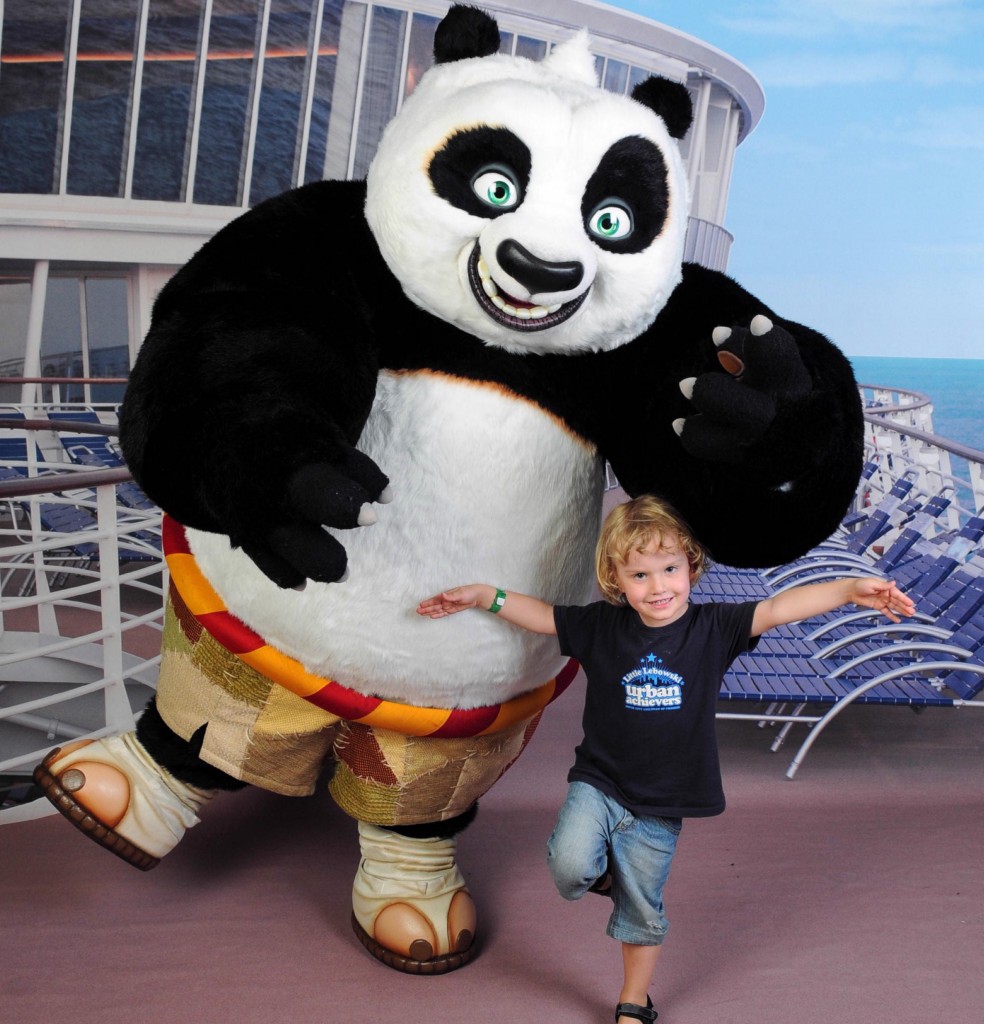 Not to mention the repeated “kidnap” attempts by a naughty King Julien who – clearly recognising in our son some kind of kindred lunatic spirit – tries (in jest) to abduct him every time he sees him. 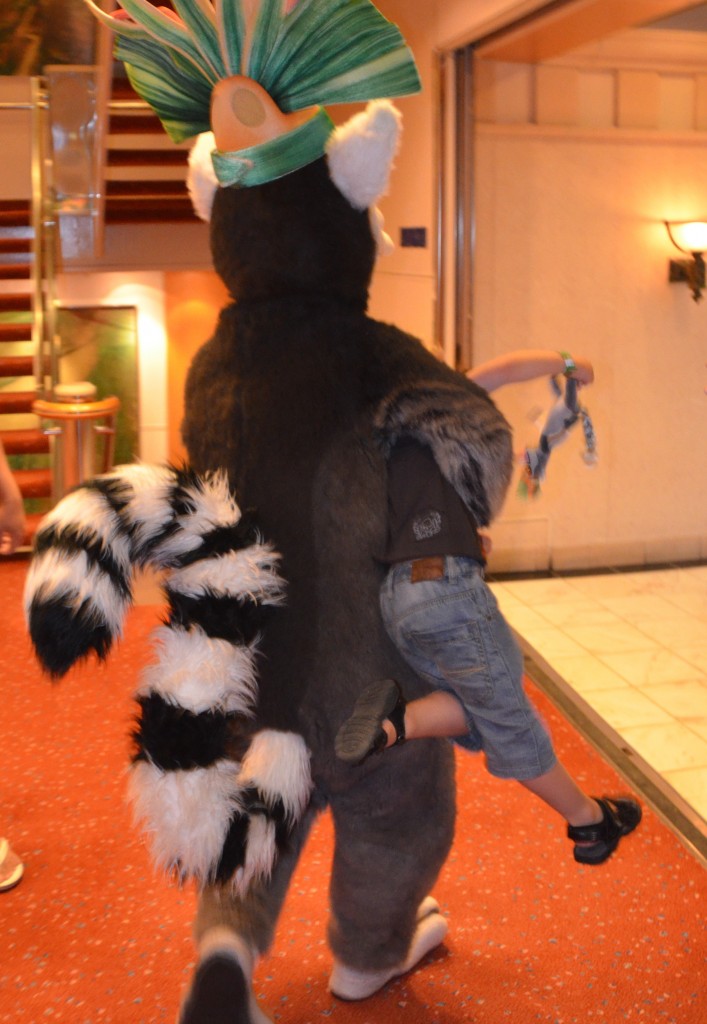 We also sell our souls to the gods of glitz and take in a performance of the ice show! Yep, this ship is so big it even has it’s own ice rink! The show is spectacular though, if I’m being honest, not the kind of thing that would usually be my first choice in entertainment. For a start it’s colourful (something that’s generally lost on a goth gal like me) and there are about two hundred million too many sequins and not enough dialogue to really float my theatrical boat. A drink helps. Two makes it quite painless.

Out of practise with the whole booze caper, a third will probably have me donning some sparkly lycra and joining the cast! Raffles on the other hand is a drag-queen in the making and adores every glitzy flamboyant moment of it. “Especially the girl with spikes on her head”! Right. 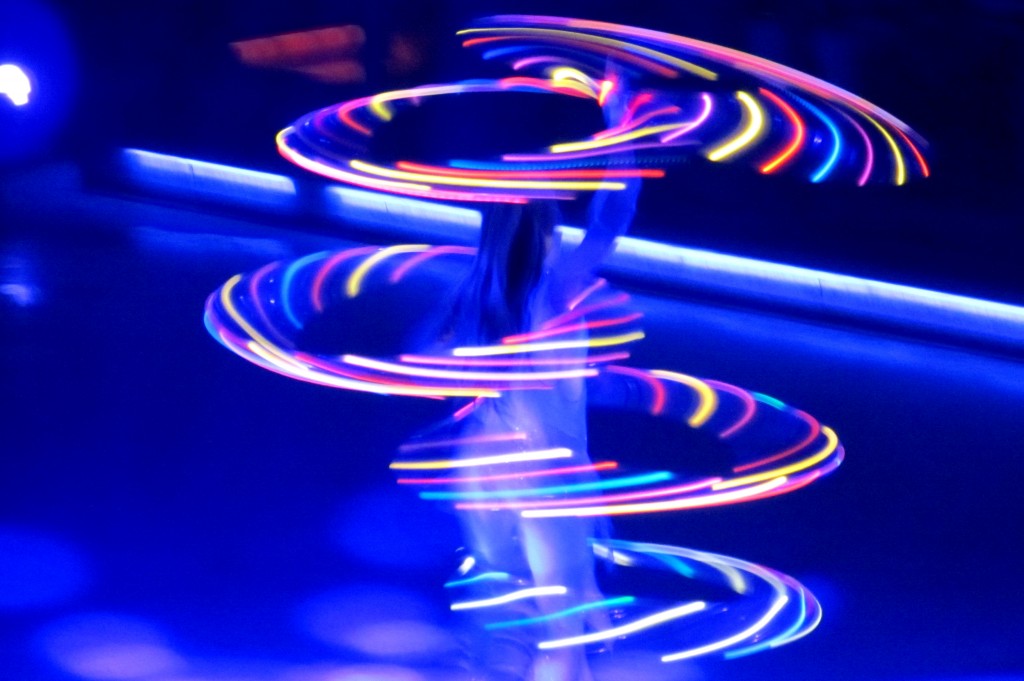 The ships ice rink isn’t only for the bedazzled. It’s been several decades since I last got my skates on but my eager son convinces me to take him for a post dinner date on ice. I manage to keep myself close to upright throughout the session while Raffles spends most of his it on his bum, giggling. 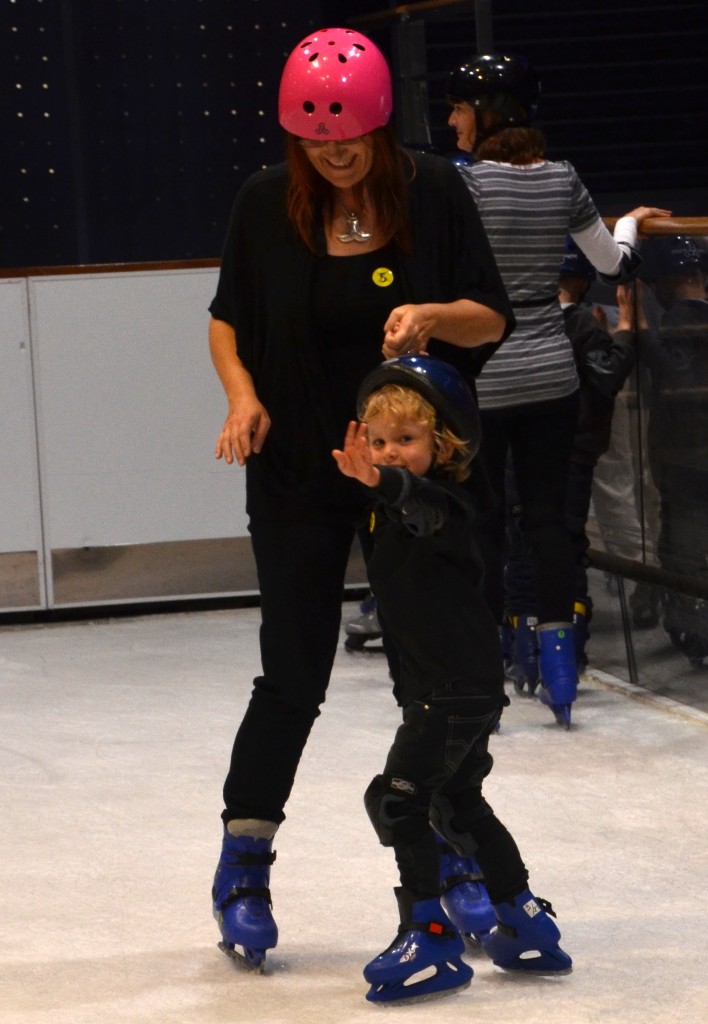 This holiday is all about our kids and time alone for mummy and daddy is a thing of fantasy given we’re sharing our room and entertaining a toddler 24/7. But, in an outrageous act of grown-up rebellion, we decide to take advantage of the ship’s babysitting service and head to the kid free environs of Portofino, Voyager’s fine diner.

Bubbles and conversation flow, without interruption, as we enjoy a sublime three course meal of sliced smoked duck with field mushroom confit (for me) and a carpaccio of beef tenderloin will plum tomato julienne and roasted pine kernels (for him) followed by skewers of Maine lobster, scallops and salmon  and a trio of chocolate fripperies. All blessedly free of face-wipes and whining.

No unpacking, no big changes to routines and bedtime schedules, no endless hours in airports. Life simply continues while in transit. Cruising. What’s not to love?