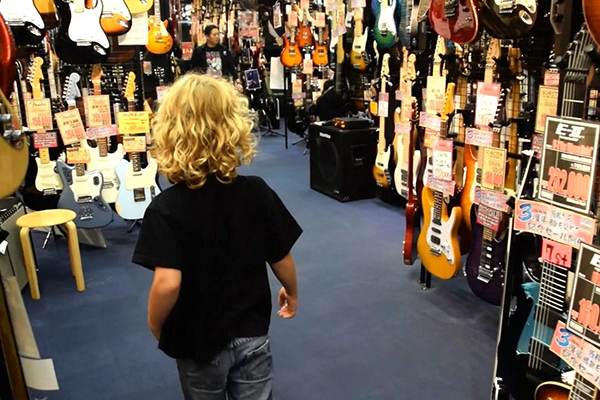 So what does a normal family do when they first arrive in Tokyo? Hit up some of the incredible shrines? Stroll the flashy neon strips of the Shinjuku, Shibuya or Ginza shopping districts? Drown in a sea of Hello Kitty paraphernalia? Or stop to snack on sushi?

You’ll have to tell me. My family isn’t all that normal.

You see, Raffles is determined to make the pilgrimage to Ochanomizu. Why? Because like Raffles, Tokyo loves rock and roll, and Ochanomizu is home to about 50 multi–storey music stores, around 30 of which are shrines to the guitar. 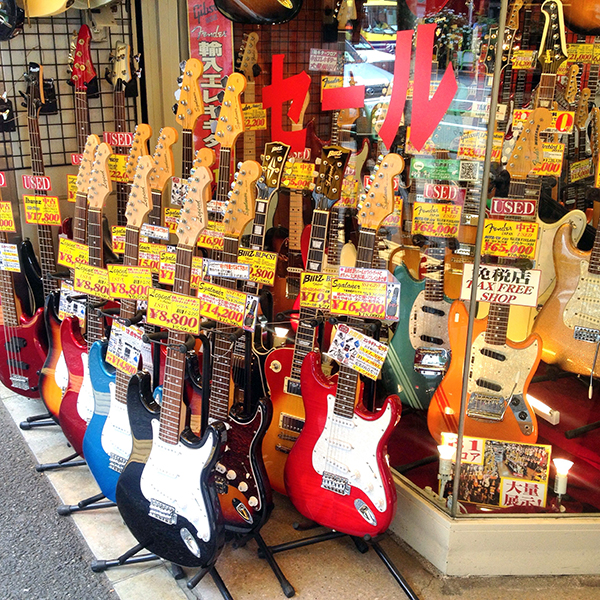 I’m a big believer in letting my children chase their dreams. And as it happens Raffles dreams include everything from hosting his own food and travel show to becoming a professional ninja or Richard Branson’s protégé. He also has plans to start his own airline, eat at every Michelin-starred restaurant on earth, and rock his guitar like a boss.

Raffles was five and a half when, after a year of pleading, he first picked up the guitar . To put that into some perspective, Keith Richards and Jimmy Hendrix were 15. At eight, he’s not quite up to their fairly high standards just yet (and by not quite, I mean not even close) but he’s got plenty of time to catch up.

When he found out about Tokyo’s Ochanomzu Guitar Street, we agreed to make it one of our first stops when we arrive in Japan. And it almost is. First we had to get lost in a couple of train stations (it’s a signature move)  and of course we’re tempted a little off course by the siren call of snacks. Until, almost by accident (certainly not due to my map reading skills or Mr Eats World sense of direction), we stumble into what can only be described as an ocean of Guitar stores.

These stores are not your typical puny-arse local guitar stores. No, these are mega-stores rising ten-storeys high and all bulging with instruments like they’re on guitar steroids.

Raffles is here to search for “The One”. He doesn’t really know exactly what that is “but I’ll know it when I play it, mum”. The only problem is that with somewhere in the vicinity of eleven million guitars to choose from, “playing” them all will take the best part of the rest of our lives. 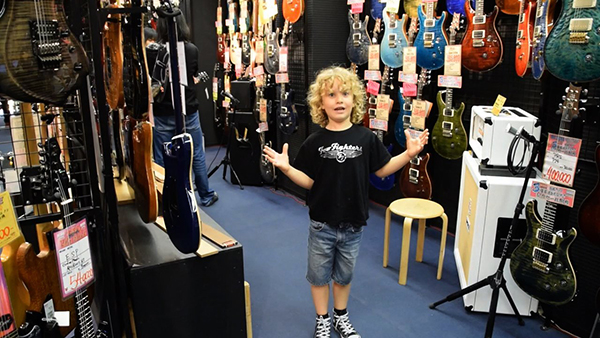 He narrows his choices by “the vibe” they give him from their hooks on the walls. There are floors of Fenders and Flying V’s, basements chock full of Martin, Rickenbacker, Gretsch and Ibanez loveliness and rooms packed with wild custom creations, classic Gibsons and Epiphones, their locally made counterpart.

He hesitates in front of a wall of Epiphones with narrowed eyes but, not wanting to commit too soon, decides to keep exploring. We’re three stores in when Raffles zeros in on a Flying V, but the price tag and impracticality see us veto it before he gets too excited. A flame-strewn metal monster also gets nixed, though more due to its unbridled ugliness than its price tag. 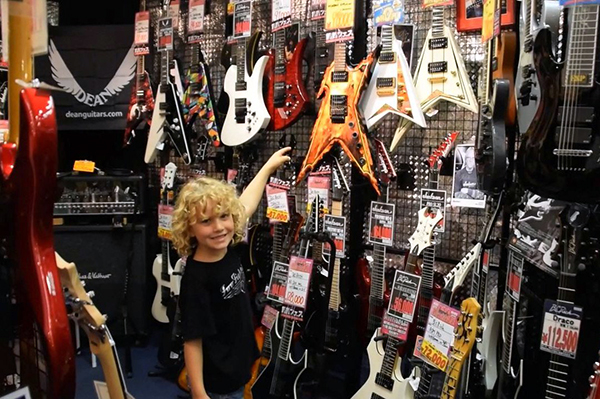 Music being the global language that it is, the stores are all happy to let punters have a bash on the mind-blowing assortment of vintage and new guitars. Even when the punters are seven-year old Aussie kids who have to communicate in semaphore and interpretive dance with the too-cool-for-school, hyper hair-gelled Japanese staff. He visits many stores, some twice, and tinkers on a sunburst Fender Strat, a Gretsch White Falcon and a very metal looking Ibanez. All are incredible but none prove to be “The One”.

We’re about to tell him it’s time to leave, empty handed, when he stops in front of the same wall of Ephiphones he had admired when we first arrived three hours earlier. He points silently to an ebony Epiphone ’56 Les Paul something, something “Gold Top” something or other. I should point out at this juncture that I am a guitar Luddite and have no idea what that all means. But it is very pretty. And the price tag is less than half what the same guitar would cost in Australia.

It is lifted from the wall by one of the funky squad store assistants/wannabe rockstars and plugged into an amp. 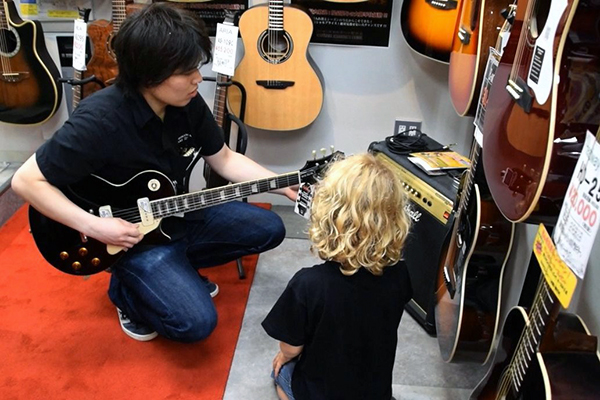 “It’s heavy” says a surprised Raffles who holds it almost reverentially. He starts plucking out a few bars of Hendrix, strums a bit of Pink Floyd and breaks in to a beaming smile.

And so it follows us home. 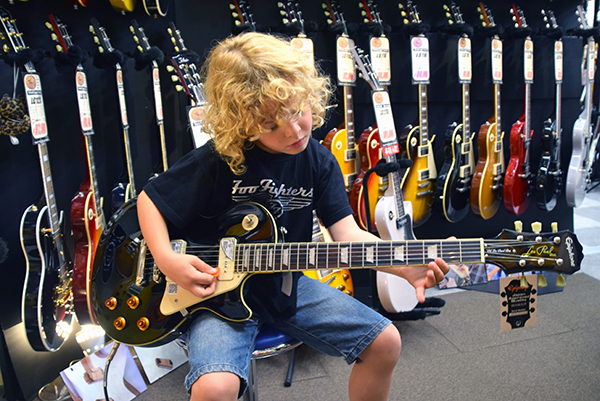 Tip: It’s easy to get lost if you are new to Tokyo so we made sure we had  mobile data connection via a pocket wifi, small portable wifi routers that is super affordable to rent in japan and which allowed Mr Eats World and I to both hook up while we were on the go, giving us much needed access to Google Maps!