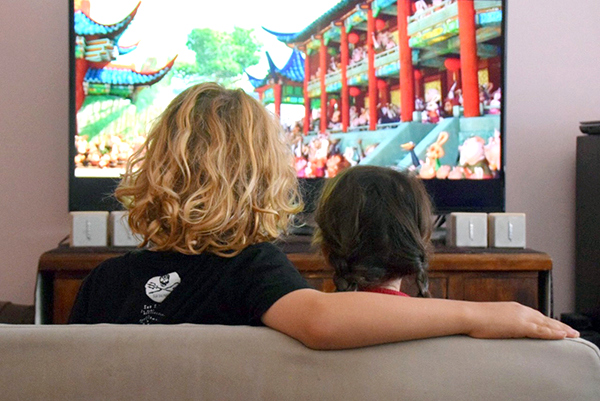 Raffles and Sugarpuff have chronic wanderlust in their DNA, so it’s a rare moment the tiny travellers aren’t dreaming of new adventures to far flung destinations. As much as I’d love to make all their travel dreams come true, our bank balance is not on the same page. So how do we scratch their itchy feet without a trip to the airport?

Turns out that armchair travel with kids doesn’t cost a thing and movies are not only an escape in themselves, but the right ones can teach the kids about new cultures, languages and cuisine and help inspire an incredible sense of adventure.

So, with a bit of a break between real world adventures, Raffles and Sugarpuff have turned to the television to transport themselves around the world.

1. They’ve learned the art of the holiday selfie with Johnny in Hotel Transylvania

2. Been on a slow boat, and fast carriage, to China with Po in Kung Fu Panda

3. Seen the bright lights of Japan with Lightning McQueen and Mater in Cars 2.

4. Toured London with Garfield in a  A Tail of Two Kitties

5. Been introduced to charming local Scottish traditions in Brave

8. They’ve learned that not all holidays are created equal with Olaf in Frozen

9. They’ve taken a watery route to adventure cruising the seven seas with Sinbad

10. Been offered an insight in to rail travel with Mr Bean

11. And been inspired to look into alternative modes of transport with Harry Potter

12. But no matter where else the road may lead, they’ll always have Paris, with Remy in Ratatouille

Disclosure:  As a member of the Netflix #StreamTeam we received a subscription to Netflix, and while I will be posting regular updates about the service, and what tasty treats we scoff while we’re watching it, all opinions expressed will be our own.

20 Comments on Armchair travel with kids