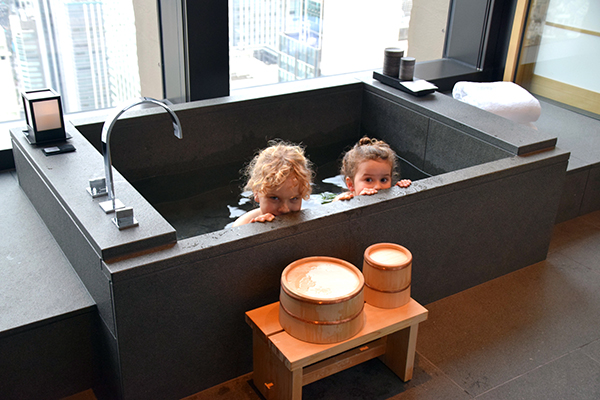 Raffles and Sugarpuff love a hotel stay, but not for the cool kids clubs, fun family activities and customised kids menus in their restaurants. In fact, it’s in spite of them. I just can’t seem to sell the idea on them… they’d much rather share the same experiences as us.

And that’s ok with me. I actually like hanging out with them. They’re a lot of fun. And while I really don’t want them to turn in to mini-adults, or for them to grow up too soon, we’re finding more and more hotels are treating our kids exactly like tiny, though much cuter, versions of ourselves. As wonderfully demonstrated by the Aman Tokyo.

Tokyo city’s newest and, in my opinion, most stylish luxury hotel offering, Aman Tokyo, isn’t for every family. If you’re looking for flashy resort style offerings, kids clubs and kids meals, you’re going to be disappointed. There are no kid specific facilities and mine are the only two I see in the entire six floor hotel on our visit. What Aman Tokyo does offer is the ultimate in urban luxe, fine cuisine and service that borders on the reverential, which is my idea of heaven. But what about the children? A stay at the Aman Tokyo with kids proves kid friendly doesn’t have to mean kiddish.

On our arrival in Tokyo the kids are exhausted from the long commute from Sydney, and after 10 hours in the air and an hour on a train, their ridiculous parents have managed to get them lost by taking the wrong exit from Tokyo station. In our defence there are about thirty million of them, and they all look eerily similar. And, just quietly, Mr Eats World has a tendency to get lost driving around the block. But our sleepy babies are barely able to stand as we turn our map this way and that trying to work out where the hell we are amongst the many nameless streets.

Luckily Tokyo is one of the most accommodating cities in the world and soon a valiant hero (cunningly disguised as a Japanese business man) spots our gormless attempts at finding our way. Not only does our rescuer find out where we need to be, but rings the hotel to let them know we are on our way. As if that’s not enough, he insists on walking us the two blocks to our hotel, leaving his sleepy Aussie orphans only once he’d handed us over to a staff member who has come from the hotel to meet him half way. Chivalry is certainly not dead in Tokyo.

The lost tourist relay fun peps the kids up a little, and as the lift opens onto the sanctuary like silence of the reception space on the 33rd floor of the 38-storey Otemachi Building, they start to get the giggles.

I’m busy shushing them because… posh hotel… but the Guest Relations team are smitten by my cackling cuties and are busy lining up for welcome cuddles.

This gives Mr Eats World and I get a chance to properly take in our surroundings. Holy shit! I think we just won the hotel lottery. 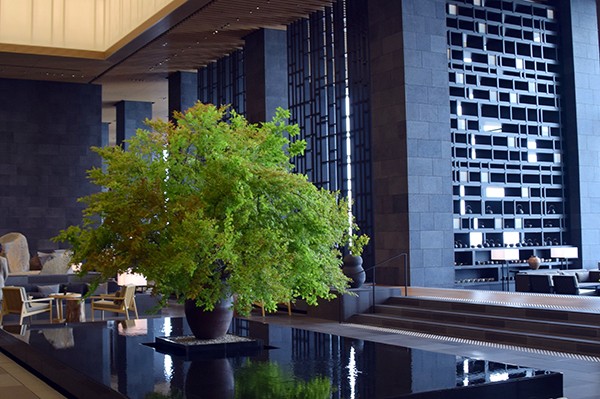 I have to scrape my jaw off the floor as I take in the cavernous lobby, a modern masterpiece of camphor wood and black stone cleverly suffused with elements of Japanese culture, like the enormous reflective pond and ikebana flower arrangement which are illuminated by a 30-metre high ceiling of glowing washi rice paper. 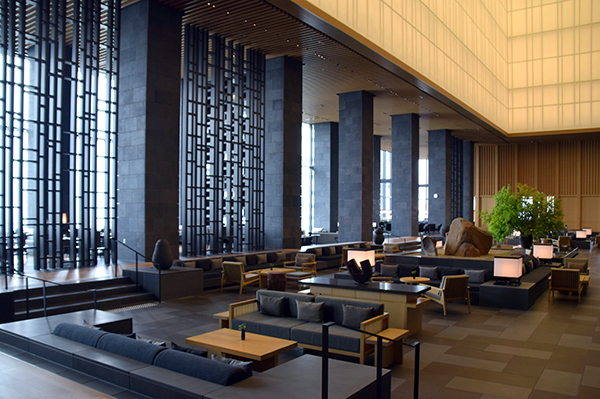 When we’re shown to our suite on the 37 th floor, the kids have conniptions. It’s massive. And in keeping with the hotel’s Japanese architectural traditions, filled with Shoji screens and floor-to-ceiling windows that create the illusion of a cloud-busting indoor veranda overlooking the lights of Tokyo. 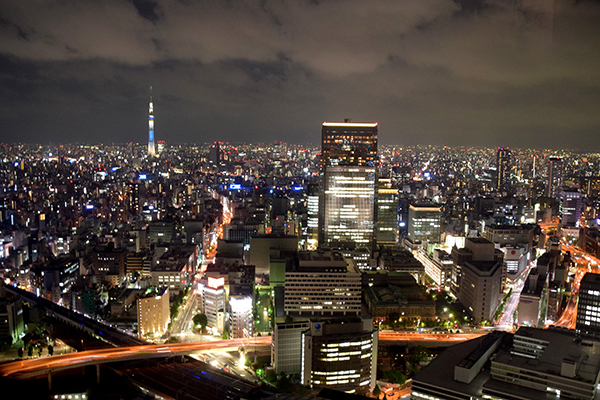 But these things do not matter to the children who are still by the front door oohing and ahhing over the sight of the family of slippers lined up for our use. 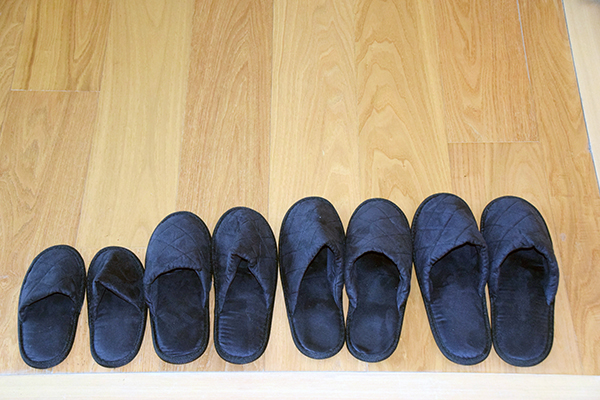 Shoes stripped off and slippers on, they then spot the table of waiting gifts and squealing ensues! 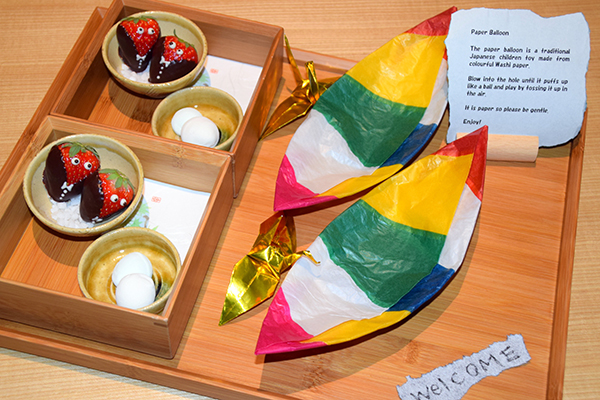 On one platter are brightly coloured Kamifusen (Japanese paper balloons) and a plate of glistening chocolate tuxedoed strawberries for the kids, and they gorge themselves on the juicy berries as we gobble down the adult offerings of dark chocolate oranges and Japanese sponge cake. 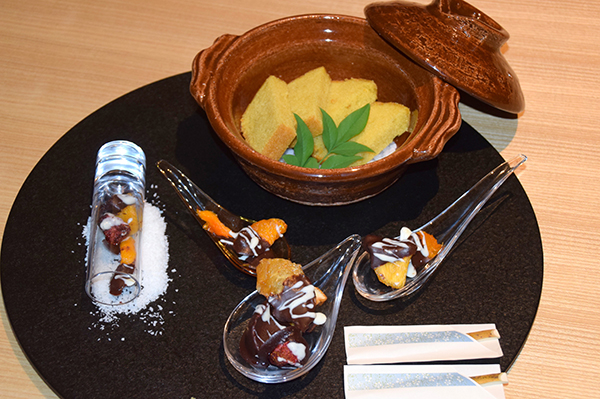 The kids are by now far too excited to sleep and instead spend the next hour playing with the toilet. But this is not just any toilet, it’s Star Command!

Japan does lavatories like nowhere else, but this one is next level. The lid opens automatically as one approaches, the flush is sensor operated and there are dozens of buttons to operate the heated seat, water jets, air dryer and mood music. It proves an irresistible temptation to the kids, who think it’s like operating a rocket ship. Indeed I wouldn’t be surprised if one of the buttons launches the toilet into outer space. I just hope it remembers to flush first or things could get ugly at zero gravity.

We finally convince them to climb into bed only for them to discover that everything is remote controlled. From the floor to ceiling black out blinds and the television, which appears from nowhere at the touch of a button. Thankfully, the whacky Japanese shows are too confusing to keep their interest and they eventually fall asleep. 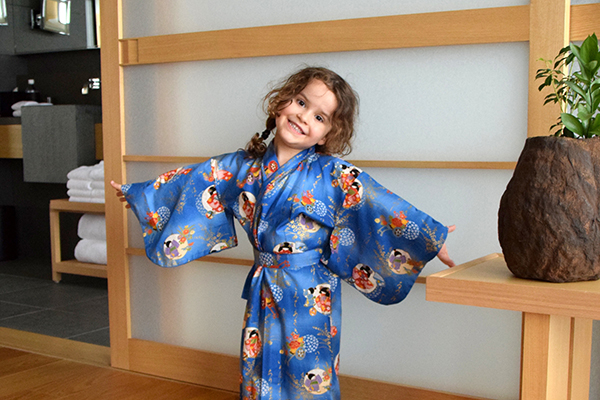 In the light of day, they’re just as excited by our stunning suite. 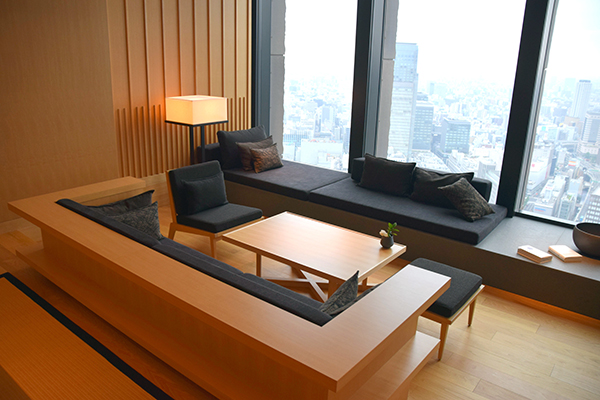 Especially the bathroom with its heated floor, mega shower and the furo soaking tub, where they happily loll amongst the sachets of fresh herbs while gazing over the city.

We’re greeted by name at breakfast in the hotel’s restaurant, which is a little disconcerting. How does everyone already know who we are? We indulge in a mind-blowing breakfast of rainbow juice shots, fresh fruit, and an assortment of Japanese and western dishes while soaking up the incredible views over the Imperial Palace. 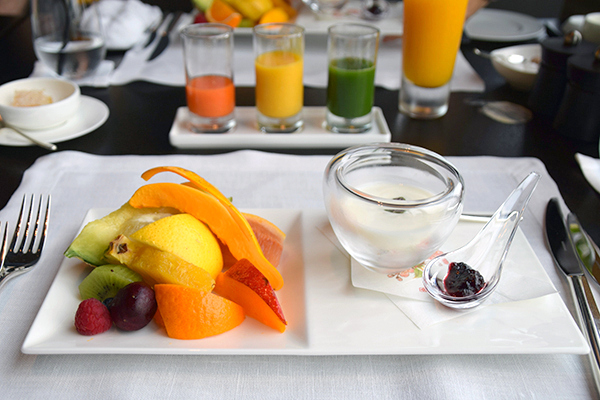 Another highlight is the hotel’s series of signature experiences. Though these are aimed at adults they’re more than happy to accommodate Raffles who joins me on an incredible chauffeured chef’s tour of Tsukiji Market, the world’s largest fish market, complemented by a meal of revelatory sushi in a tiny high-end sushiya. It is an experience he declares the culinary highlight of his young life.

But it’s not our only culinary highlight. There’s a signature Black Afternoon Tea of black bamboo meringues, black sesame scones and dark chocolate treats that has Sugarpuff’s name all over it. And which is accompanied by a soundtrack of live traditional music. 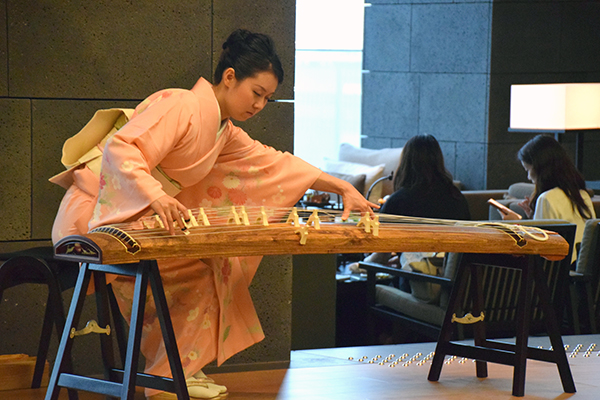 And dinner – a traditional Japanese-style Kaiseki dinner that is so prettily perfect that we are, for once, left speechless. 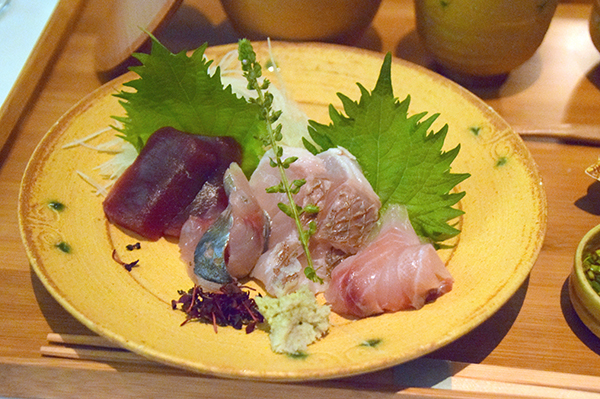 Well, all of us except Sugarpuff who is squealing over the origami Hello Kitty that she has just been gifted by our waitress. 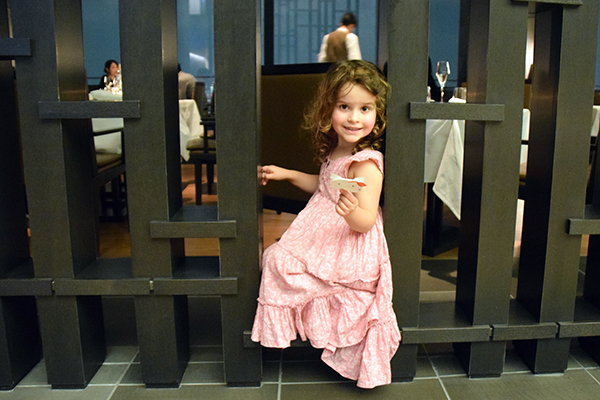 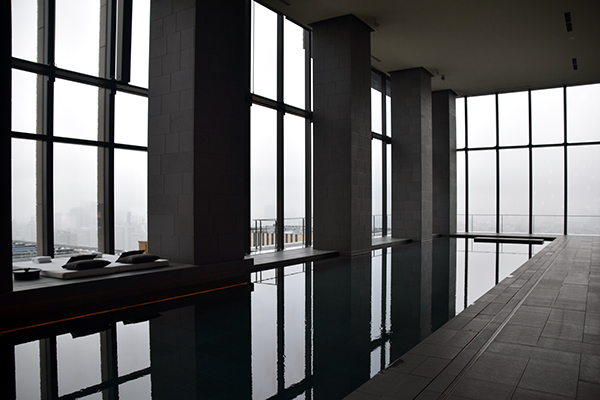 Which we invariably have all to ourselves. 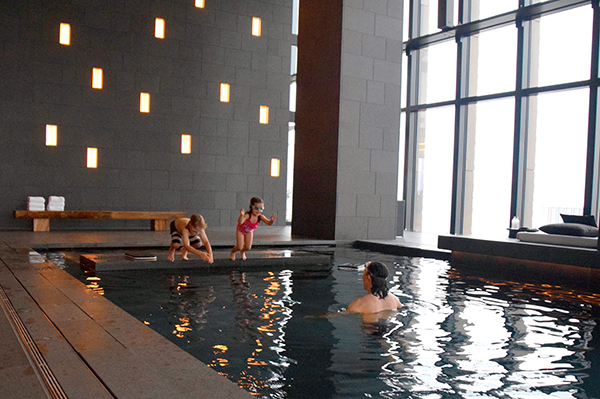 The kids are treated like Royalty, greeted by every staff member by name and with respect. And they love it. They’re not told to be quiet or not to touch and not once do they find themselves on the end of the withering glances we sometimes receive in higher end hotels. Rather their joyous spirit is encouraged and embraced by the hotel staff and patrons. And because they are treated with respect, they behave respectfully.

Despite the lack of kids clubs, activities, or chicken nugget stuffed menus, they declare it the best hotel ever. And you know, I think I might just agree with them.

17 Comments on The A-List: Aman Tokyo with kids