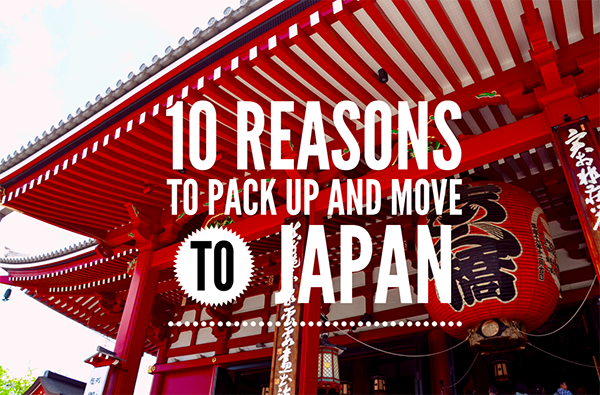 Raffles and I have at least a million and one posts to write following our amazing trip to Japan. We’ve so much to tell you about our hopeless devotion to this weird and wonderful place. We’re eager to share tales of the country’s friendliness, its beauty, its culture, its food, its ninjas (you’ll spot them everywhere if you look hard enough), its not quite as appealing earthquakes (which we rocked our way through two of), and about our unhealthy addiction to Pocky sticks and multi-flavoured Kit-Kats. But these will have to wait as I have at least a million and two deadlines to meet this week.

However, in the interest of procrastination, I’m cleverly avoiding addressing said deadlines by giving y’all a little taste of things to come by sharing ten reasons why we feel like packing our bags and making a move to Japan… 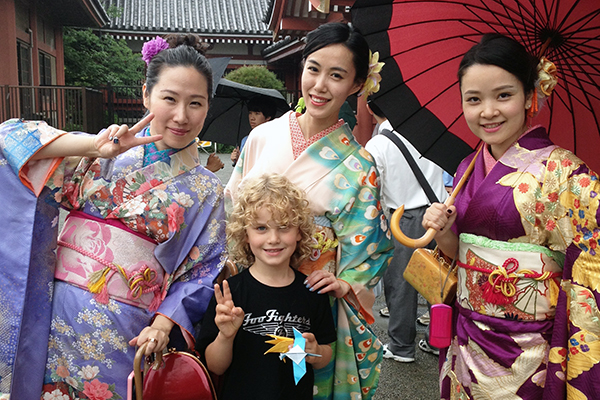 1. Food
This one is a no-brainer, right? From cheap eats on the street to Michelin starred magic, this country gets its food right every time. Well almost. Notable exceptions would have to be basashi which is essentially raw horse meat, shirako soup made from cod semen, canned bread, and fugu which, made as it is from the flesh of the poisonous puffer fish, could render you stone dead if incorrectly prepared. I’ll pass…

But there are so many other great dishes! Without committing to a definitive list some of our favourites were the fluffy bowls of donburi, plump pork filled gyoza, addictive bowls of steaming ramen, fresh tuna sashimi, incredible sushi prepared by chefs who’d trained for decades, bite-sized chunks of deep-fried ka’arage chicken, cirspy tempura, plump and unctuous Ise udon noodles, oily flavour-packed unagi (eel), the fondue style dippery that is shabu shabu, and of course all the yaki’s – Teri, Teppan, Okonomo and Tako. 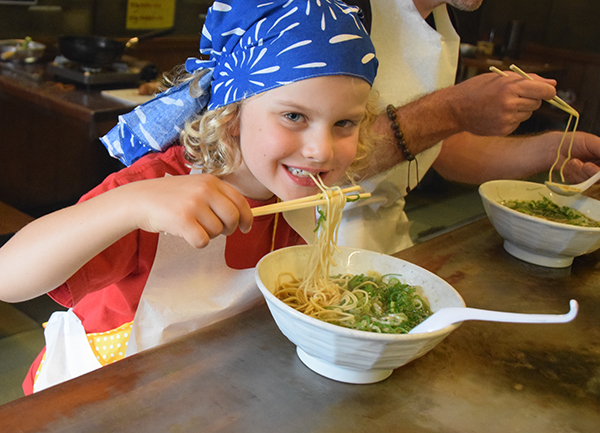 2. Toilets
All toilets are not created equal! While they are all designed to take the piss, so to speak, most modern Japanese toilets are sophisticated electronic devices with an array of features, many of which are a little alarming for a first time user whose grasp of Japanese is poor. And for first time user, read me.

While I loved the butt warming seats, auto flushing, and even the deodorise functions, others like the turbo-spray arse shower were a little more disturbing. For the particularly modest, some had a noisemaker that emits white noise that drowns out the sound of your own bodily functions so no-one know what your doing in there. As if they won’t catch on by the fact it’s a freakin’ TOILET!

There are other buttons to push but by the time I found an air dryer that blew wind up my hoo haa (a particularly disconcerting sensation) I gave up because God only knows what it might do next… possibly make toast or set off a chemical weapon. 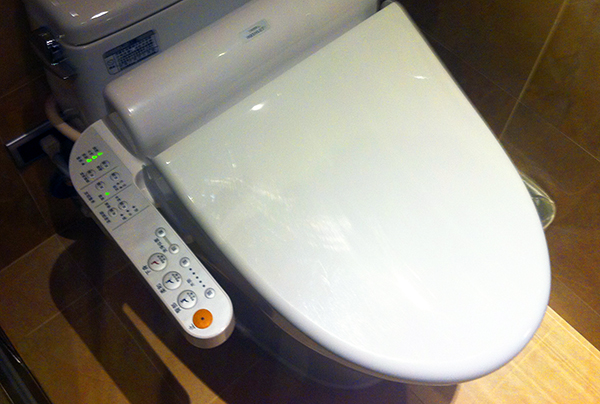 3. Themed restaurants
Let me put something out there as delicately as I am capable. Japan is batshit crazy. In a good way. Things are either extremely conservative, saccharine cute, or so bizarre that it is quite impossible to explain with any logic.

There is no better place to witness this epic eccentricity than at one of the many themed restaurants. From cat cafés where you pay for the privilege of having cat hair in your coffee, to sitting in a boat and catching your meal from the tank below, or even being handcuffed in a cell while you dine; they are bizarre, bordering on the inappropriate, rarely about eating, and loads and loads of fun.

The title for Tokyo’s most bonkers attraction has to go to the mind-bending Robot Restaurant. I’ve never tried LSD but I’m fairly certain that the director of this show has… while he created it. Think dancing girls, fire breathing pterodactyls and a panda bear riding a bull through a line up of giant robots. By the time a mermaid rides a giant shark that devours an armoured alien warrior, you’ll barely raise an eyebrow… but don’t attempt to make sense of what’s going on or your brain may explode. 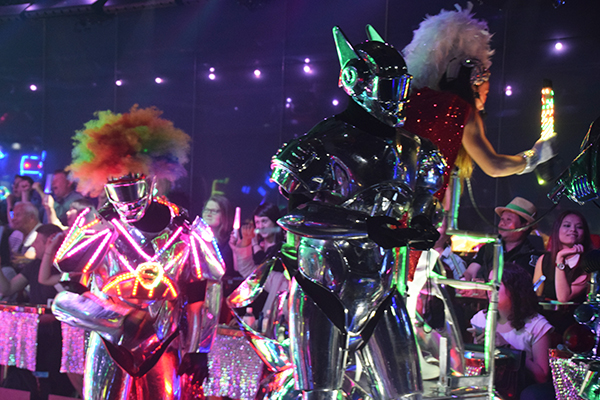 4. Convenience stores
In Japan, convenience stores, or combinis, are nothing if not convenient. In fact, there appears to be one located every 200 metres or so. But unlike our 7 Elevens, they are much more than a fag and mag stop. Though you will find both. You’ll also find about ten thousand flavours of Kit-Kat (do yourself a favour and try the raspberry), varying seaweed and green tea-infused snacks, fresh sushi plates and hot snacks including ka’arage (fried chicken) rocking the counter right next to yakisoba noodles in hotdog buns and corn dogs.

Cold cans of coffee sit alongside Coke and bags of dried seaweed share shelves with potato crisps. Plus you’ll find a fridge full of Japanese beer, shelves of sake and $10 bottles of French wine, making it a piss pot’s paradise. Again, that might just be me.

Electricity bill due? You can pay your bills while you stock up on concert and amusement park tickets and afterwards warm your butt on one of those high-tech toilets. I may move in to one.

5. Vending machines
From the peculiar to the mundane, you’ll find pretty much everything in vending machines. From cold coffee to hot tea, bread in a can (I didn’t go there) to bras (or there), umbrellas to Buddhist charms, hot chips to noodles, Pocari sweat (a beverage clearly based on a dare) to beer. You can even use them to order your dinner. Japan’s vending machines are your friends. Hold them. Love them. They’ll never let you down. 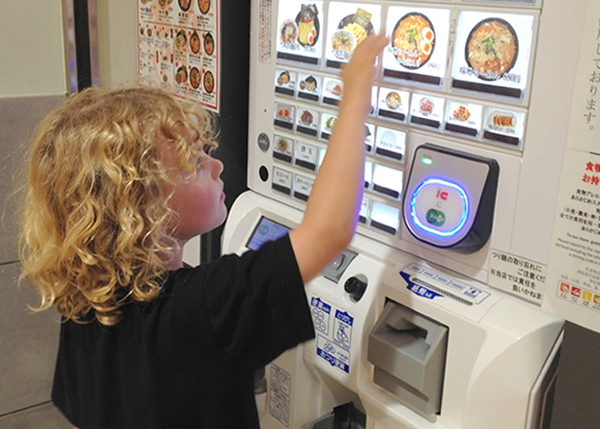 6. Booze
In many countries, including Australia, it is actually illegal to consume alcohol in public spaces. I’m happy to report that Japan is not one of them. In fact, perfectly good alcohol is readily available everywhere from the aforementioned vending machines to department and convenience stores as well as on the bullet trains. And it’s pretty cheap. And alcoholic. Need I say more?

7. Manners
Japan is one of the most accommodating nations I’ve ever visited. In fact, politeness seems to be a national pastime. As is gallantry. All one has to do is look confused holding a map and you won’t only have offers of help and detailed directions but your knight, or knightesss, in shining armour will all but piggy-back you to your destination, even if it’s three blocks out of their way. Service is incredible too. Whether you’re at a combini, an upmarket restaurant or just buying a train ticket the unnerving attention borders on the reverent. I like it. 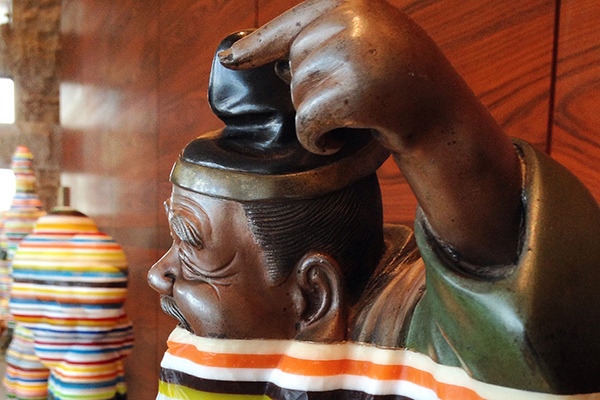 8. Punctuality
I’m chronically punctual. So much so that I usually arrive at appointments at least fifteen minutes early – just in case. This problem stems from a latent paranoia that I’m going to upset or let someone down. In turn I tend to freak when anyone is more than a few minutes late, assuming of course, they aren’t coming because they hate me. Did I mention paranoia?

But in Japan everyone and everything is fantastically punctual. So punctual that they somehow manage to time things to arrive at the very second they’re supposed to be there. Even the public transport is so punctual that they schedule arrivals by the hundredth of the second. A train that is even few seconds late is considered a travesty but it almost never happens. Look and learn Sydney Rail.

9. Public Transport
Speaking of trains, there’s no denying that Sydney’s public transport system is fairly ordinary. And by ordinary I mean crap. A fact made more obvious when travelling to virtually any other city on earth. But Japan’s public transport is freaking awesome and even its mega cities – where upwards of 3,500,000 people can pass through a single station in a day with ease – knock it out of the park. Buses and trains are impeccably clean, fast, comfortable, and punctual to the point of Tokyo lines running to centiseconds of their scheduled time. Not only that but the literally hundreds of interconnecting lines link with local funicular railways, cable cars, buses and even ferries. And don’t even get me started on the awesome Shinkansen (bullet train) that run at speeds of close to 300km an hour and serves beer. Beer! Who knew that peak hour could also be happy hour! 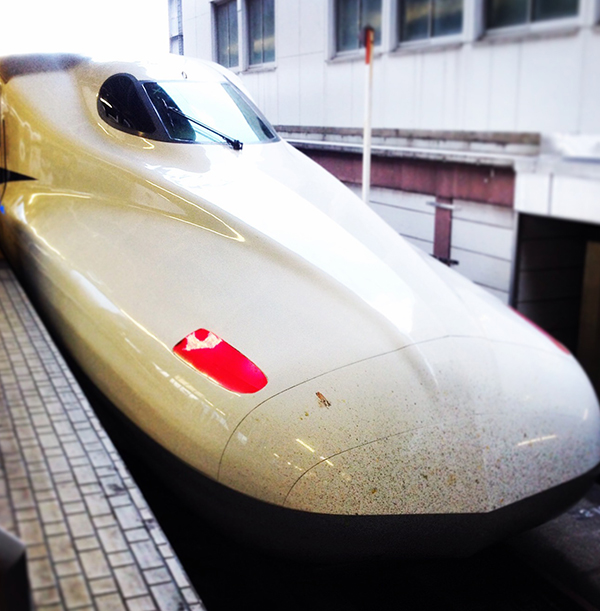 10. Recycling
If, for a moment, we can put aside the whole whale thing, the wastefulness when it comes to food, and the undeniable fact that they use far too much plastic and packaging, Japan gets some things incredibly right when it comes to the environment. Not only is it incredibly clean and one of the most energy-efficient industrial countries in the world, but all but small businesses are required by law to recycle all glass, plastic and paper. There is also an extraordinary system for household garbage disposal. Residents are required to separate their rubbish into burnable and non-burnable then further sort into sub-categories including raw waste, plastics, glass, aluminium, paper, cardboard and more. Local authority approved see-through bags mean that if you try to cheat the system by shoving a Coke can in with your latest issue of Popteen, your rubbish will be left at the collection point branded by a red sticker of shame so your bizarre penchant for ridiculous teen fashion and cold hatred of the planet will be exposed to your neighbours. Shame on you.