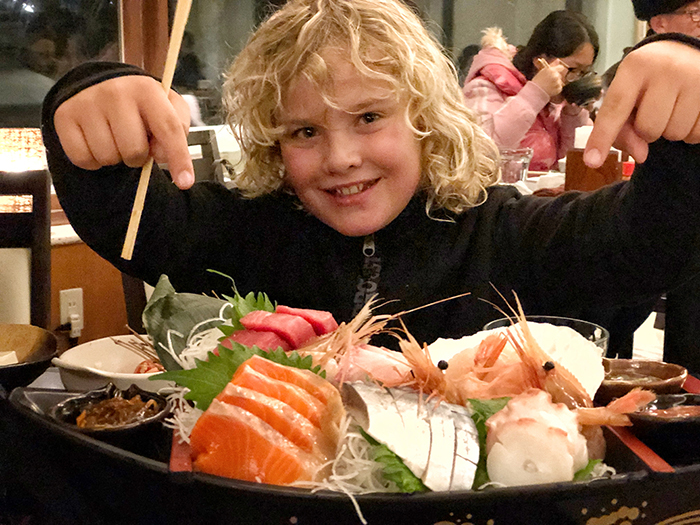 And that is not just because it tasted so, so good. It was because it was healthy too, so I got no arguments from my mum when I was shoving it in my gob by the bucketful … though she did still get a bit cross with me when I shovelled it without using appropriate etiquette. Thankfully, etiquette in Japan allows for slurping with gusto, so that got me off the hook in that area at least.

There are more than 20 eateries at Hoshino Resorts TOMAMU, offering everything from super fancy kaiseki (multi-course) meals to Japanese fast food and desserts. And you know I had to attempt to eat at them all, at least twice.

The best thing about the food on offer here is that it’s all so different, but just as delicious as the stuff I’ve eaten in other parts of Japan. There are two reasons why. One, is that you need warm and hearty dishes to defrost your frozen belly, and the second is that some of the best produce in the country comes from Hokkaido. Some Japanese people even call it the “Kingdom of Food”. Now, that’s the kind of kingdom I want to rule some day.

This part of Japan produces more than half of the country’s milk and dairy products as well as some of its best beef and pork. Then there’s all the drool worthy seafood… the freshest salmon, fat and juicy scallops, silky Hokkaido squid, and epically enormous king crabs, as well as snow crabs and freakishly hairy crabs.

With so many new dishes to taste, I thought I’d round up my must-eat Hokkaido-style dishes at Hoshino Resorts TOMAMU so when you visit, you’ll know exactly where to go to make your taste buds as happy as mine. 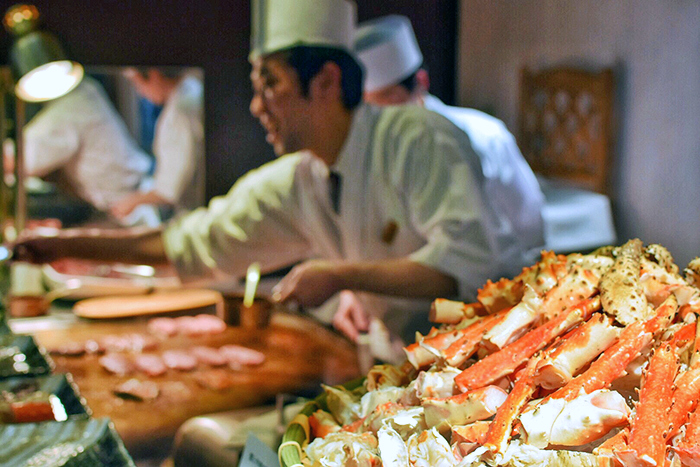 In Hokkaido they have all kinds of enormous crabs that were as big as me, and I wouldn’t want to meet a live one in a dark alley. Unless it was on a plate ready to eat. The crabs are at their best in winter and the meat is soft yet firm and some of the tastiest I’ve ever had. And because they’re so big, there’s none of that picking and scraping for meat, these things are chock full of it. Best of all, as restaurant hal is a buffet, I could eat my bodyweight in it. And did, of course. 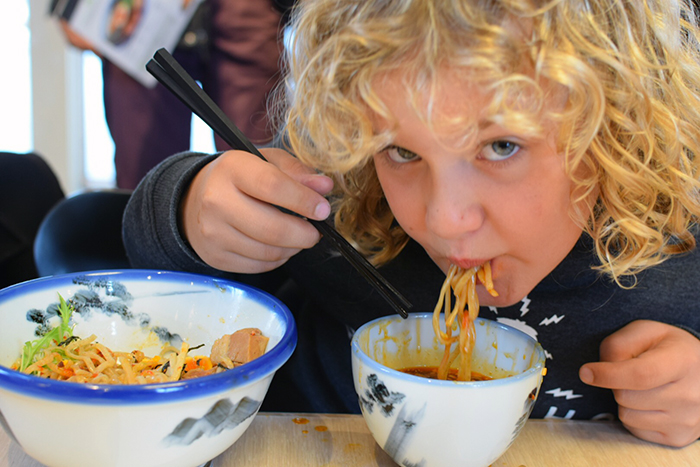 I have never met a ramen I didn’t like, but the Tsukemen at AFURI in hotalu street is so awesome I would marry it if I could. Tsukemen is one of the specialties of AFURI and is a dipping ramen. The noodles were fat and had a good bite to them. And the broth was spicy and so, so tasty. It was eating this that I learned the phrase, Oishii Desu (delicious). 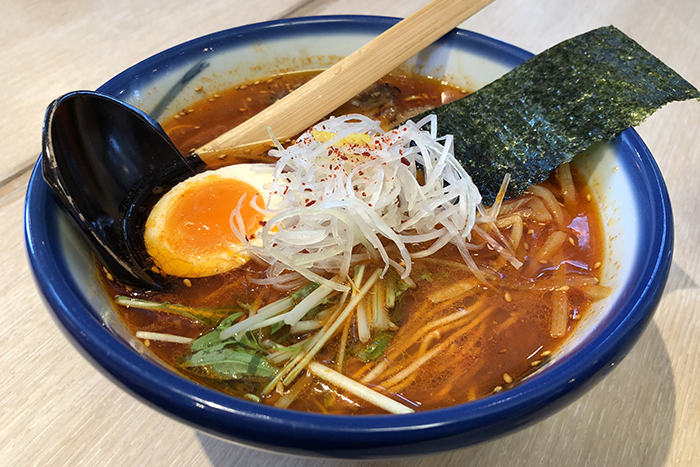 Because too much ramen is not even close to enough, we came back to this place for a second bowl. This time my yuzu obsessed mum turned me into a raving fan too with a big bowl of Yuzu Ratanmen, another of their specials. This one came with thin, delicate noodles in a spiced clear broth that has been boosted with a citrusy kick of yuzu and topped with a generous serving of charcoal-grilled pork, perfectly soft-boiled egg, and nori. This was mind blowing and somehow managed to be both warming and refreshing after a big morning on the slopes. You absolutely have to eat this. I insist. 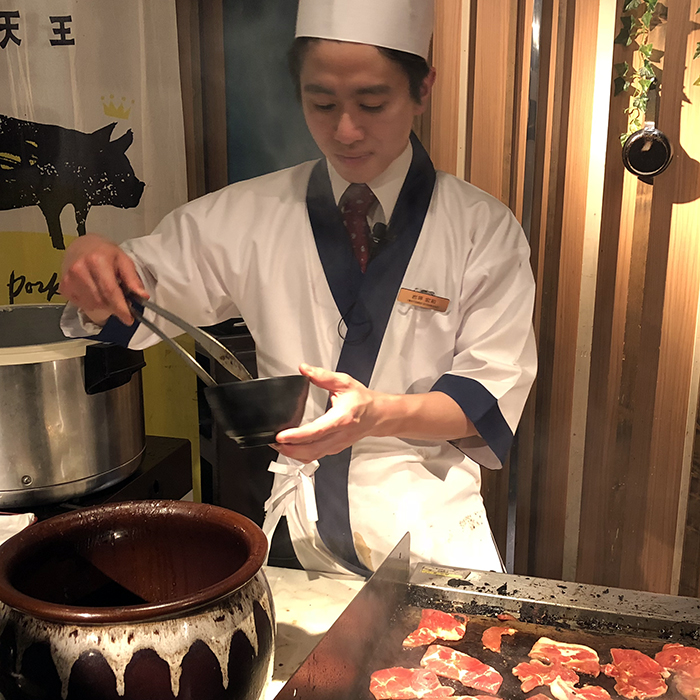 Butahage is basically a simple grilled pork rice bowl made in Hokkaido style. The pork is tender and juicy and covered with some kind of tasty secret sauce that makes you want to eat ten million bowls of it at once. Sadly, mum made me stop at two. At least that’s what she thinks.

Nininupuri is a buffet style restaurant and literally everything was good, but besides amazing food it is worth visiting just for the views of the epic pine forest that surrounds its mega glass walls. 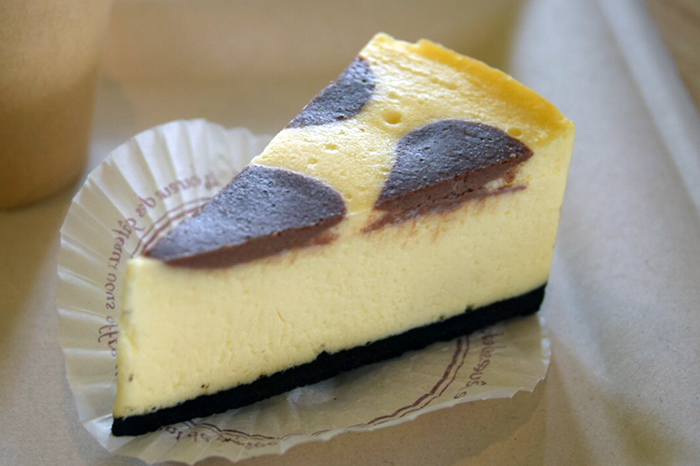 OK, so this might not sound all that Japanese but trust me, this epic chocolate-spotted cheesecake is a Hokkaido must eat. I first saw Adam Liaw (who is my food hero) eat it on Destination Flavour, so it’s kind of famous. And it is good. It’s creamy. It’s chocolatey. It’s cheesy. It’s everythingy. 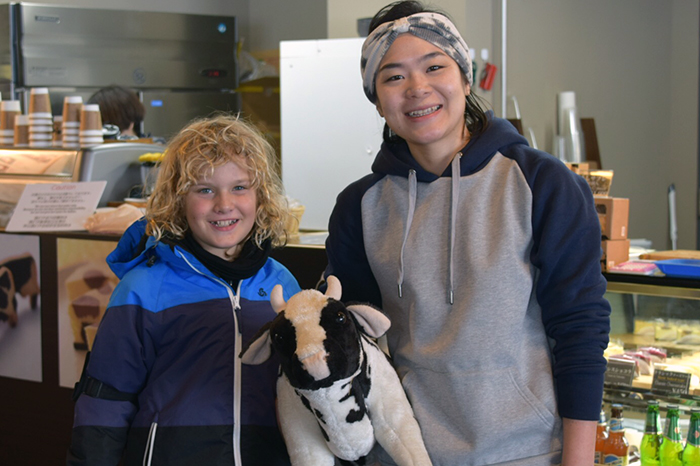 And best of all I got to meet Kazuha who is the super nice daughter of the people who invented it! 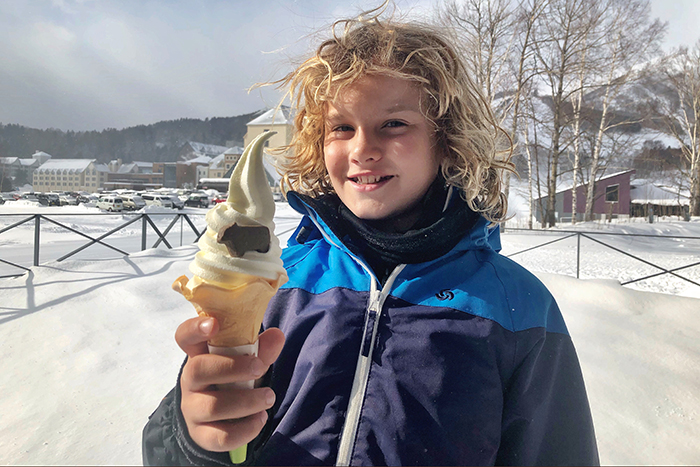 While we were at farm design we had to try some of the famous Hokkaido milk ice cream, because who wouldn’t want to eat a freezing cold ice cream on a -15 degree day. This stuff is really good. It tastes like a frozen glass of the creamiest milk ever and you must scoff at least one while you are in Hokkaido. 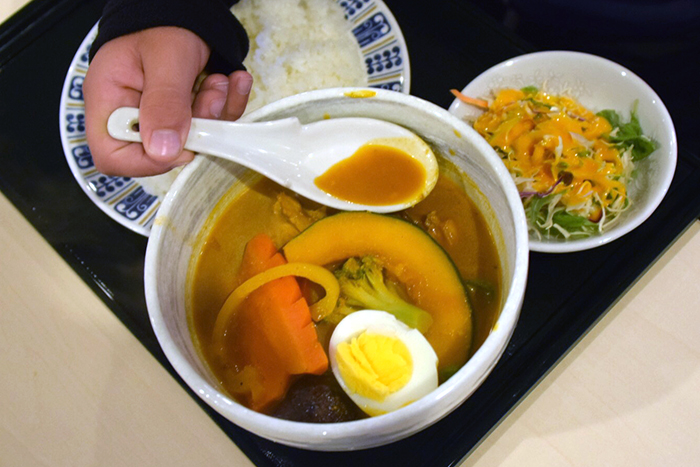 Bistarai Bistarai is a Nepalese restaurant located in the Resort Center.  Before you tell me off for going rogue, I skipped their Nepalese dishes and went traditional Japanese as they also served a killer Soup Curry, a spicy curry served in a runny, soupy style and packed with chunks of tender chicken and vegetables.  This is a traditional local Hokkaido dish and it is addictive. 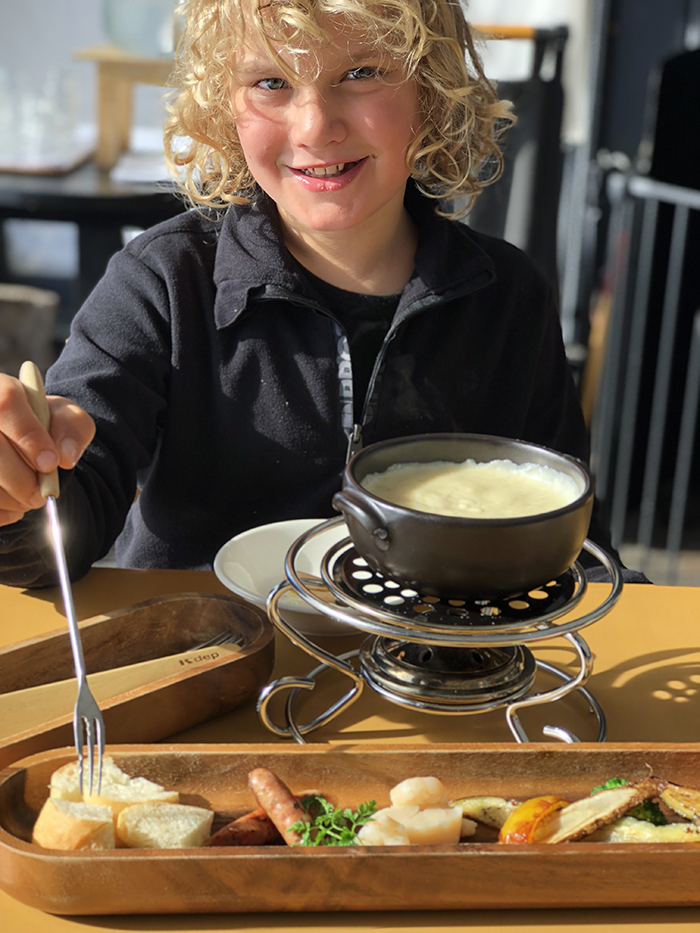 Fondue may not sound very Japanese but this was fondue Hokkaido style. Made from local Hokkaido cheese and served with a plate of Hokkaido scallops, little Japanese sausages, gobō (burdock root) and a plate of the most buttery, crazy good A5 grade Hokkaido wagyu beef. It was so amazingly delicious that it blew my taste buds off. This was like no fondue I’ve ever had before and if the bowl had been any bigger, I would have jumped in and licked it clean. 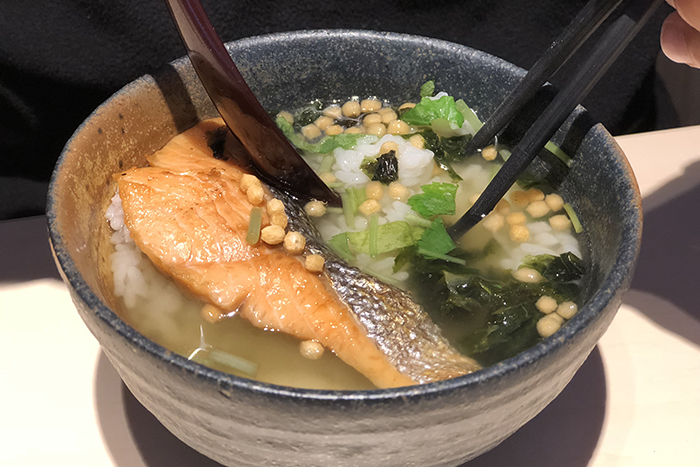 Mikaku is the place for a proper Japanese breakfast. They have a genius chef who knocked out yummy Japanese omelets with serious pro skills, plus lots of interesting dishes that I wouldn’t expect to see at breakfast. My favourite was a Hokkaido favourite called ochazuke, green tea rice with aged salmon. It was rice in a green tea and dashi broth topped with a super flavor-packed piece of salmon, some kind of pickled green vegetable, nori, and some rice bubbly things called arare that were yum. It was a great way to start another day of skiing and scoffing in Tomamu. 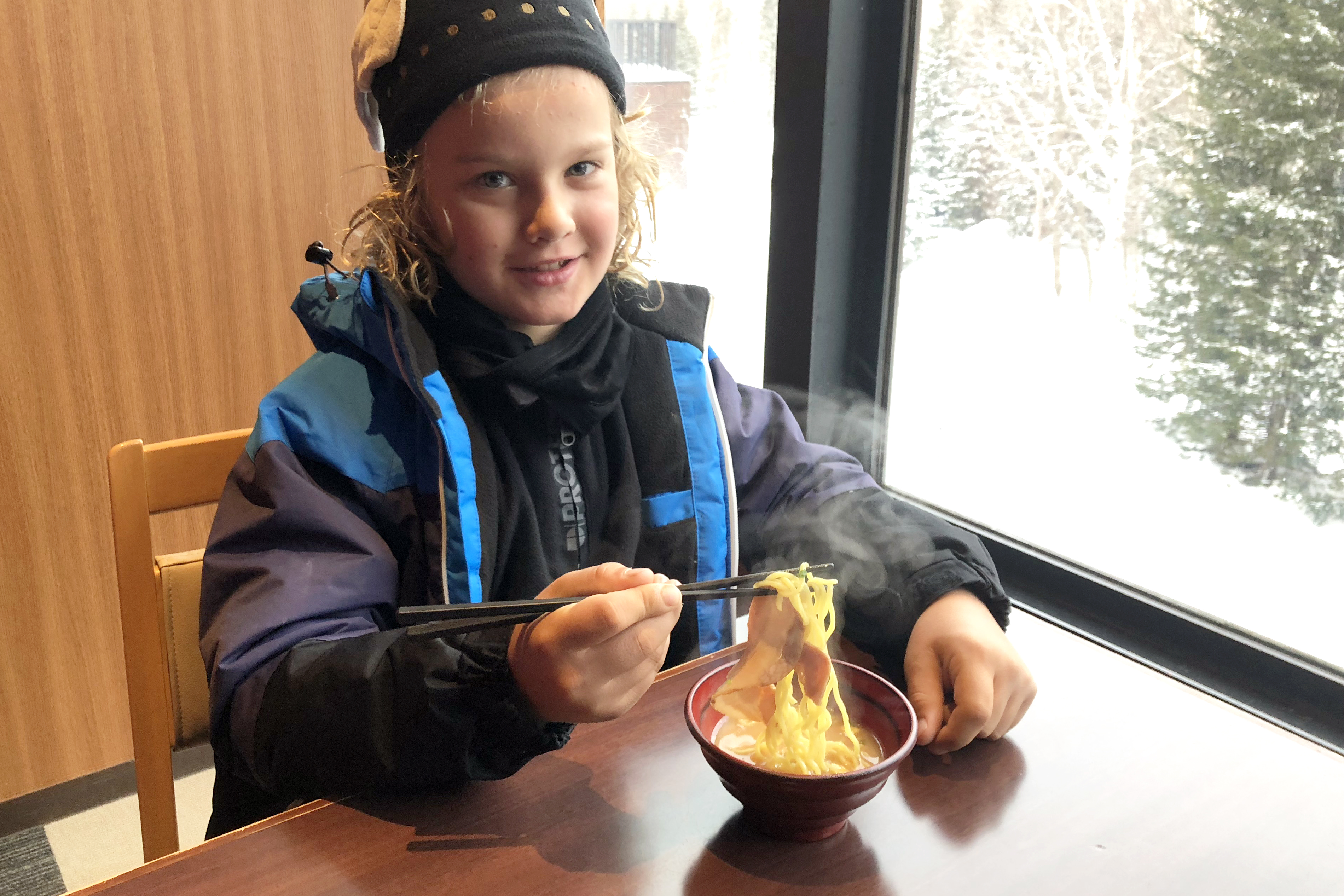 Ok, I know I sound obsessed with ramen but that’s only because I am. This one is a Hokkaido regional specialty and its not every day you get to eat ramen for breakfast so this one has to be on my list. This ramen comes topped with sweet corn, pork belly and served with a blob of butter. It is utterly delicious and I may or may not have eaten three bowls. But hey, I skipped the cornflakes course, so it’s not like I was being greedy or anything. 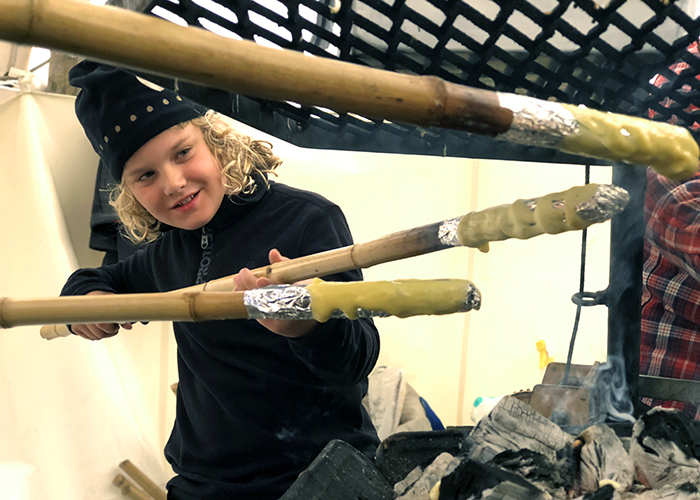 This dish I got to make myself. In a tee-pee on the snow. Baumkuchen is a ten-zillion layered cake you make on a stick that you rotate over a fire. You have to cook each individual layer of batter before adding another, and it takes ages and ages. But I got to play with a stick and fire, which my mum would normally veto, so I thought it was epic fun. 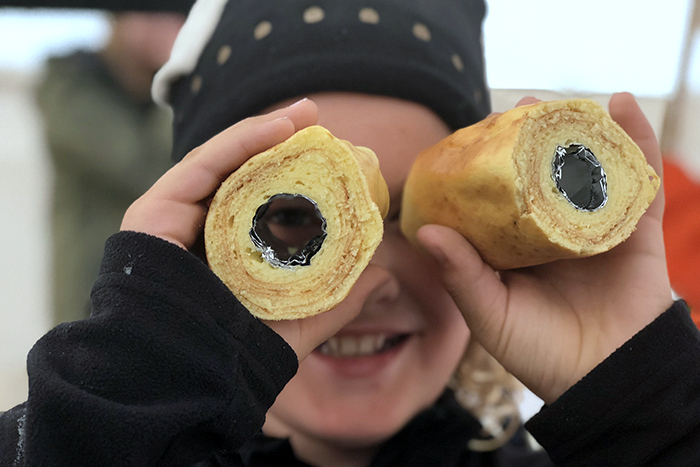 And the end result was awesome, even I do say so myself. 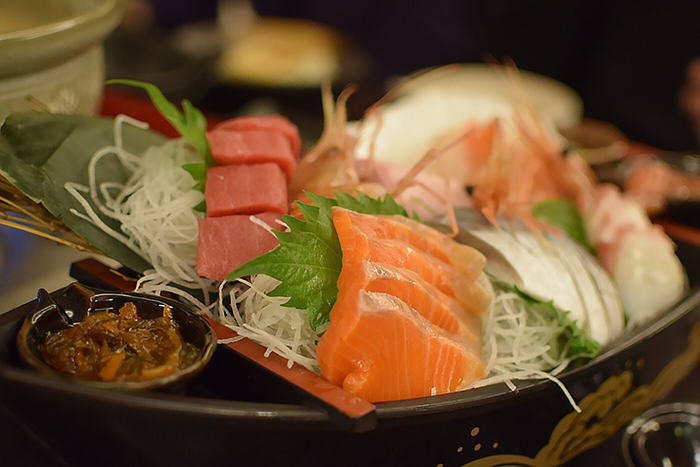 If I had to pick one place only to eat it again at Hoshino Resorts TOMAMU, I’d go for Kanemaru Goto Shoten because their sashimi plate was epic. It included silky salmon, delectable scallops, big chunks of luscious melt-in-the-mouth tuna, white fish (that I can’t recall the name of), prawns, octopus and mackerel.

It was some of the best sashimi I’ve ever eaten and I wolfed it down like a shark who’d been on a starvation diet. Though I tend to do that with every meal.

The platter also came with three curious little bowls of stuff and you know I just had to give each of them a try. The first dish was raw octopus in wasabi which was really quite nice. There was also some flavour-packed stringy stuff that tasted really good (I wish I knew what it was called). But the third bowl proved to be my nemesis. It was called salted squid guts and it is an acquired taste.  No offence to the chef though, because I’m sure that as far as squid guts goes it was great (it is a very popular dish here) but this one beat me. 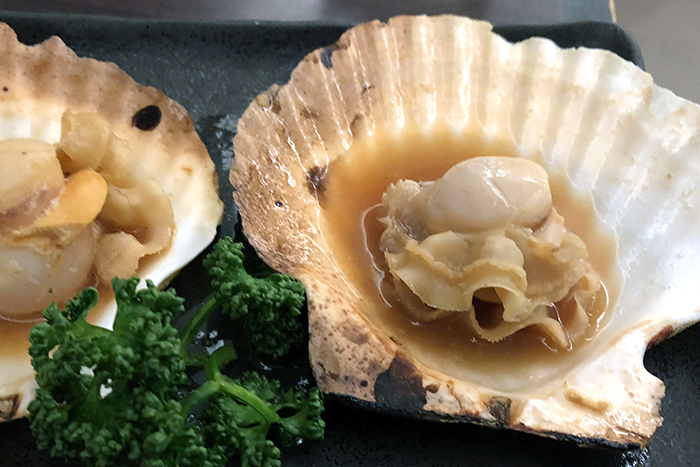 Kanemaru Goto Shoten scored several places on my ‘Tomamu Foodinator 2018’ hit list because it rocked. Big style. This was the place I got to try fresh Hokkaido scallops, grilled in their shells. These things were like mega super scallops wearing skirts, at least that’s what it looked like because they had frills around them. They tasted a little different to scallops back home too, but I suggest trying them if you’re a seafood fan like me. 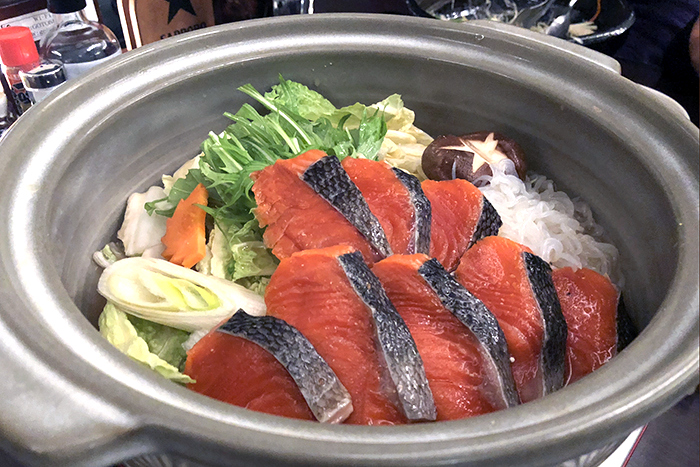 I nearly fainted when they brought out the Ishikari Nabe (Salmon Hot Pot ) because the hot pot was so big it filled up the table. This is a local dish of salmon and vegetables in a miso-flavoured broth, cooked at the table. The soup was salmony and utterly lush, and I loved everything about this dish, especially its size. It’s a perfect dish for the cold weather and I recommend everyone should give it a try. If you don’t like it, ask for a doggy bag and bring it back for me. I’ll be happy to finish it for you. I’m super thoughtful like that. 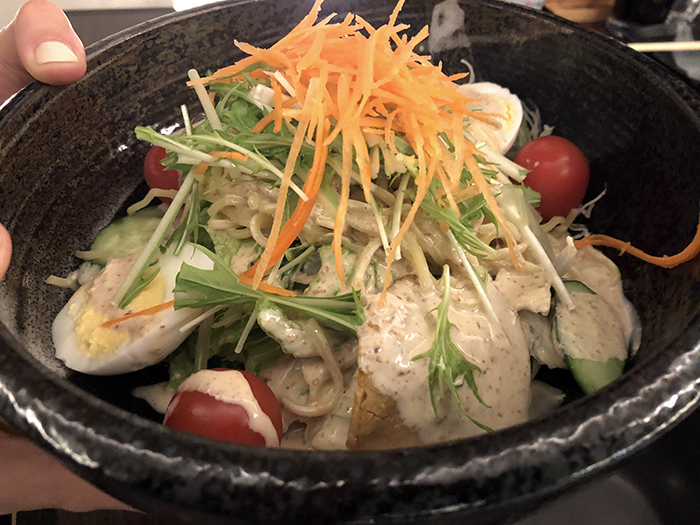 Kanemaru Goto Shoten scores one last dish on my list because their ramen salad was nothing short of perfection. I don’t know if it’s a local dish but please, please do yourself a favour and order it. It’s a bowl of cold ramen noodles, mizuna leaves, cucumber, carrot, hard-boiled egg and a slice of pork belly, dressed in sesame and Kewpie sauce. It may not sound like much but it made my taste buds dance.