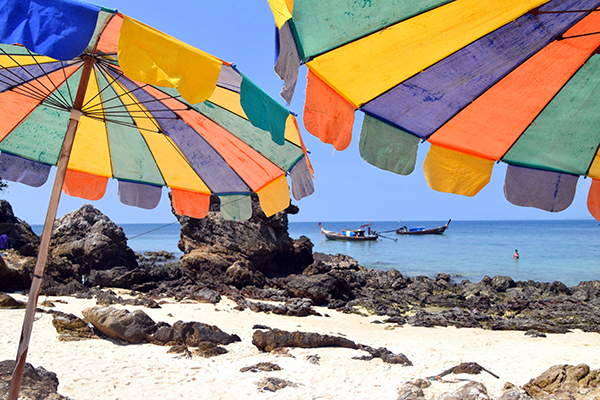 The brochures tell us that Koh Khai Nok is a teensy tiny island tucked away in Phang Nga Bay, surrounded by turquoise water and teeming with a ridiculous quantity of fish. And, hints the glossy flyer, being just fifteen minutes by speedboat from Phuket, Koh Khai Nok with kids is a no-brainer.

After a few very busy and long days in Phuket, the island sounds like a perfectly relaxing antidote for my weary, snorkel-happy children. Unfortunately, the brochure fails to mention that there’s an hour and a quarter drive to reach said speedboat and that any relaxing can be done only if we survive it.

During our stay in Phuket, I’ve proudly watched Raffles and Sugarpuff step way out of their respective comfort zones. Raffles has taken on the Boomerango and Superbowl thrill rides at Jungle Safari Water Park – which is more than can be said for his cowardly mother – despite a long-standing phobia that is the result of a watery mishap as a toddler. And the usually timid Sugarpuff too has blossomed into something of a tropical socialite, making new friends wherever she goes.

But no matter how brave my babies have been, nothing could have prepared them, or me, for the psychotic (and seemingly deaf) driver who has us all bent over plastic bags ready to hurl as he careens around the streets of Phuket! He stops and starts, swerves wildly, runs motorcycles off roads and hoons down the wrong side of double lines into oncoming traffic – despite the protests of his terrified passengers.

It’s like being in a movie car chase and I look over my shoulder to check if we’re being followed by James Bond or Jason Bourne or some other sociopathic loon with the same initials who drives really, really fast! In fact, so convinced am I that we’re all going to die, I start singing Koh Khai Nokking on Heaven’s Door quietly to myself while trying to hold my children’s chunder bags in position.

It is at this point I realise why mention of the island back in Phuket had drawn blank stares. No one has ever survived the return trip to talk about it.

Despite our drivers best efforts we arrive in one piece at a wharf where we fall to our knees and kiss the ground. There’s just enough time to coat the kids in sunscreen and suit up with life vests for our speedboat ride. But with both of the kids already squeamish from the death-defying drive, I still can’t relax as I am expecting chunks to fly on the journey to the island.

Instead the fresh air clears their nausea and, as the boat approaches Koh Khai Nok, their tiny faces light up at the jaw-dropping sight of the tiny islet covered in sparkling snow white sand and plonked in a pretty pristine blue puddle.

Things are looking up. 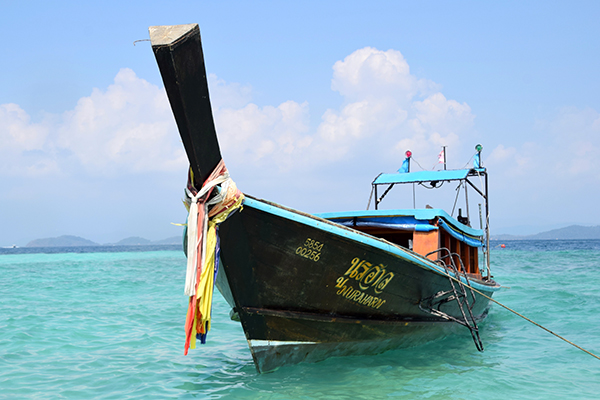 At least they are until we draw closer and see that, even at this early hour, the tiny island has already been inundated with several hundred tourists packing an arsenal of selfie-sticks. And there is not another kid in sight. 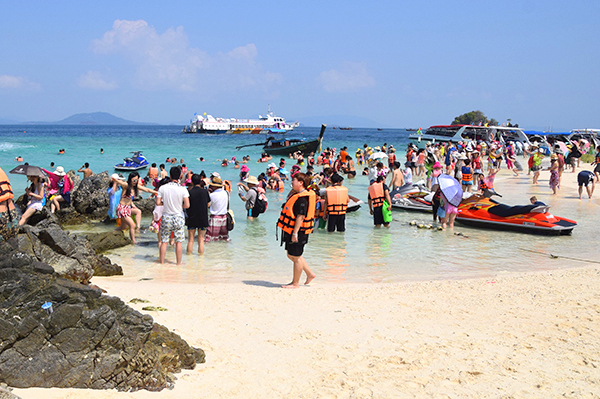 We’ve already forked out an awful lot of money for our little adventure, so we’re surprised when we’re told we have to pay for the use of one of the umbrella covered beach chairs. But given it’s around 41 degrees and there is literally no other shade on the Island, I cough up the cash and start lathering on another litre or two of 5000+. 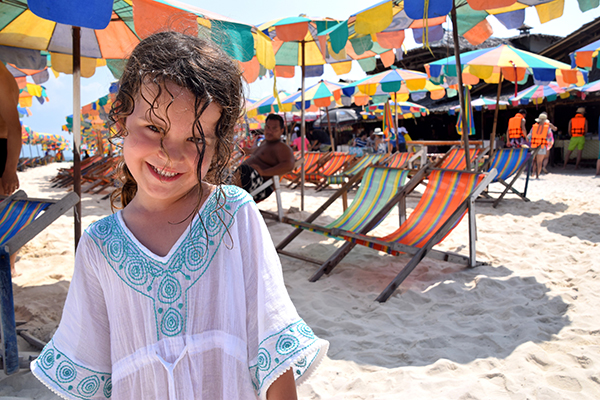 With enough sunscreen on the kids to block the whole in the ozone layer I finally stop for a moment to properly survey the island. 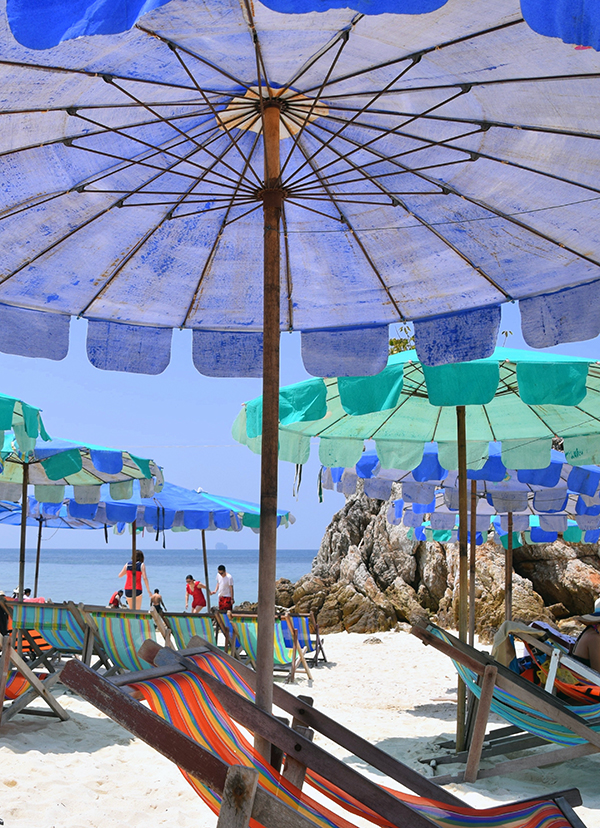 In the centre are quaint stalls and restaurants selling everything from sarongs to ice cream. There’s a rickety timber bar perched prettily on a rock and several traditional long boats, strewn with flowers, are floating by the edge of the beach. Despite the swarm of selfie-obsessed humanity, it is an undeniably pretty scene. 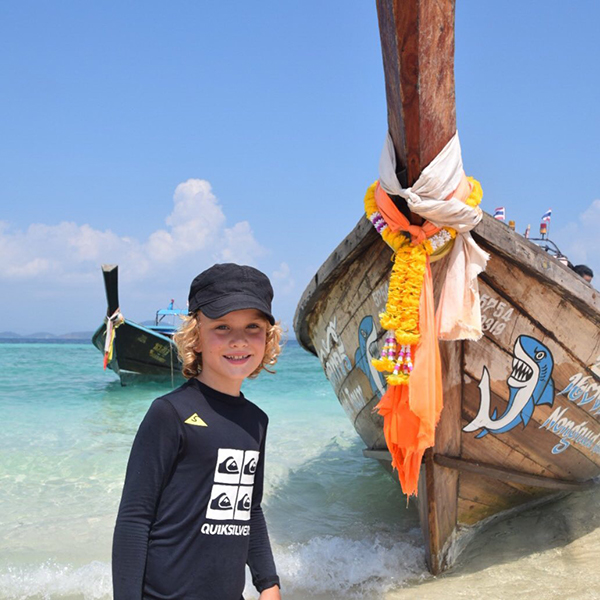 Our tour guide interrupts my reverie to show us the way to the island’s best snorkelling spot. We attempt to navigate our way around the 41,234 people already crammed in to the pretty but tiny area… and then things get a little complicated. 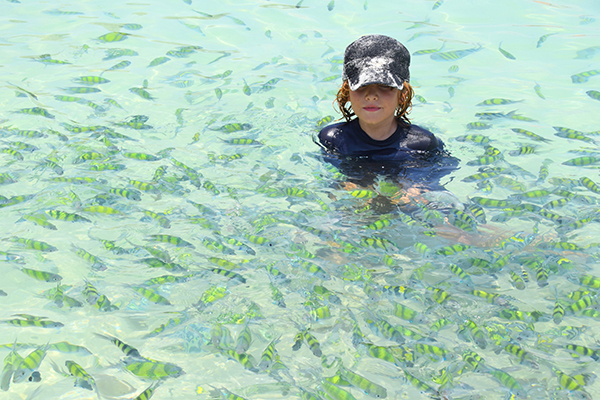 You see, Raffles is desperate to snorkel amongst the billions of fish we can spy in the shallow water, but Sugarpuff is passionate about staying on the beach to collect treasures. I am equally keen that neither one of them drown due to an inattentive parent. None of us are prepared to budge and much bickering ensues. With Mr Eats World sadly back in Australia at work, I’m flying solo on this trip. Working out how I can safely watch them both do their thing makes my brain explode a little bit, and my already substantial awe of single parents soars. How do they manage this shit every day?

There’s no choice but to take it in turns, Raffles snorkels while I standby in the shallows with Sugarpuff on one hip as a shoal of pretty tropical fish, who are punching way above their weight, attempts to chew my legs off. 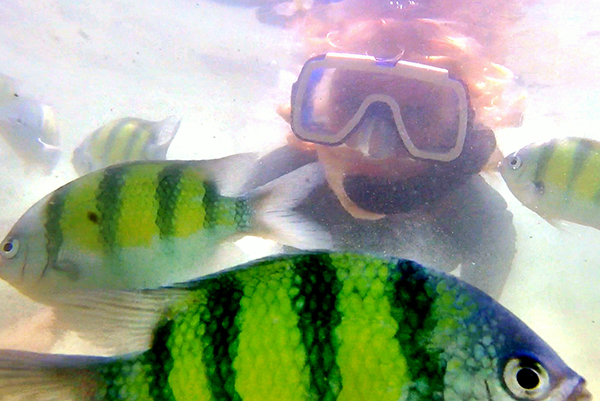 Then it is Sugarpuff’s turn. Raffles is forcibly removed form the fish-filled water so I can assist her in scouring the shoreline for shells and bits of broken coral without leaving him to drown. For the next few hours, between liberal slathering’s of sunscreen, the kids alternate their individual island quests. Raffles is utterly enchanted by his underwater encounters and Sugarpuff too – having plundered the island’s considerable treasure (which will be left behind, albeit in newly formed piles) – is in her happy place. 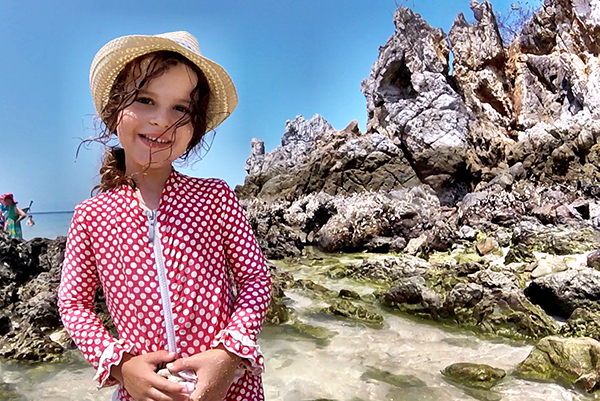 In our final thirty minutes on the island, the crowds mysteriously disperse, and Khai Nok finally becomes the picture-perfect paradise of the brochures. 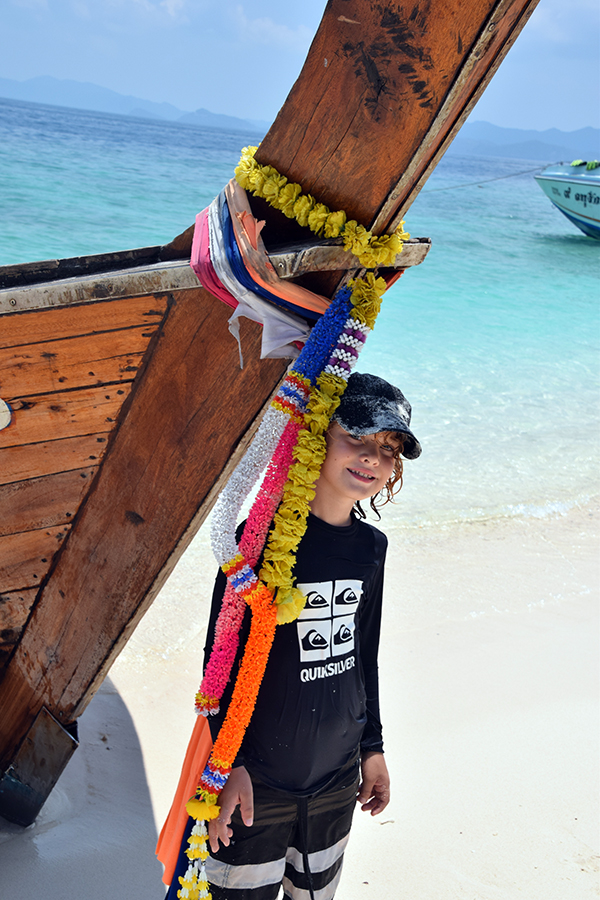 But by the time we’re due for our return speedboat ride, I sulkily realise that I’ve been so busy keeping the kids happy I haven’t even managed a dip into that irresistibly pale blue water. So I do what any sensible parent would… pop them both into the speedboat with our guide and dunk myself head first into the water to marinate in it for a few magic moments. 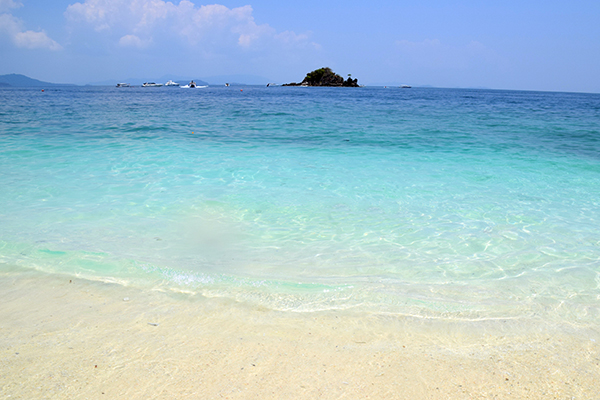 And what bliss that thirty seconds is.

After our return speed boat trip, we find lunch waiting for us under flame-hued flowers. While the kids chow down on curry and tom yum, I have a quiet chat to the tour organisers about the chance of us finding an alternative route back to town. 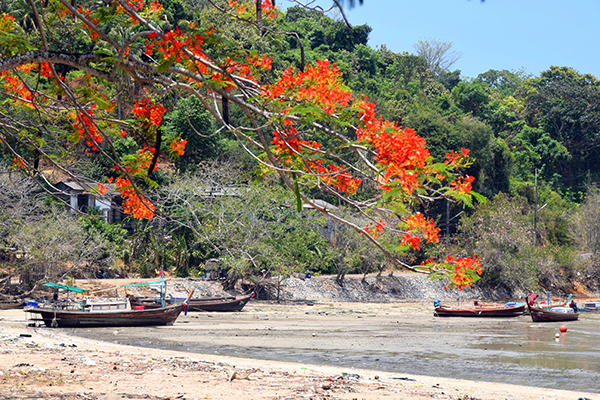 I’m soon joined by a throng of fellow passengers equally insistent that they’re not prepared to get in to any vehicle driven by their psychotic stunt driver. Happily, they acquiesce and with a sane person installed in the driver’s seat we all head back to town in safety, happy to have seen the pretty island but happier still to be back in the safety of our resort in one piece.

So would I recommend an excursion to Koh Khai Nok with kids? Sure. As long as you’re prepared for the long drive to get there, have a plan to accommodate the differing needs of your kids if you’re travelling solo, carry several litres of sunscreen and a sick bag, don’t have an aversion to wading through a sea of selfie-sticks, and can possibly avoid sociopathic drivers, it can make for a pretty and pleasure packed few hours.

16 Comments on Phuket with kids: Koh Khai Nok, or not?