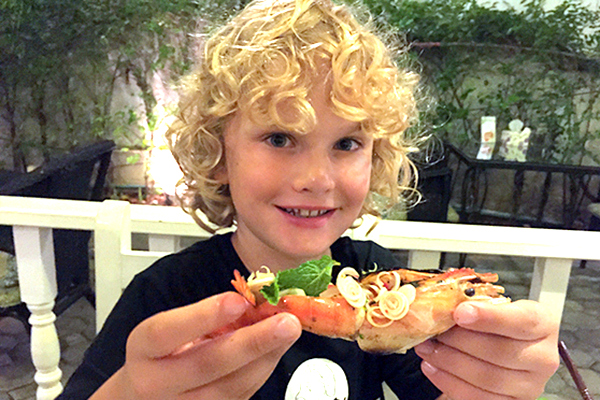 Phuket was like heaven for my stomach! There were so many curries, so many noodles and so many weird things to eat. Thai food is packed full of flavour and spice and I was like a vacuum cleaner sucking up everything in sight. But there was one meal that was especially amazing and that was at Suay Restaurant Phuket, which I think is the island’s best restaurant.

I knew this place would be extra special because my new friend Mark Wiens from Migrationology, who eats almost as much as I do, told me I would love it. And he was so, so right.

Suay was a little bit different to other Phuket restaurants. It was kind of like a house and opened up on to a pretty garden. The whole place was lit with cool green lights (which was very ambient but made the food a little bit tricky to photograph). It felt special. And so did the service. 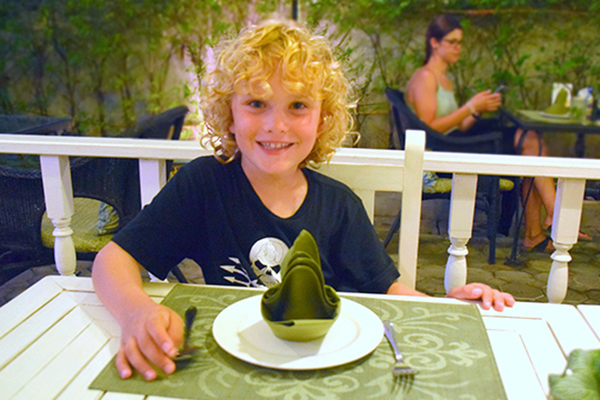 But the amazing thing was that though it felt like we were dining at a really posh restaurant, the prices were so, so cheap! Mum always makes me practice my math when we travel by getting me to try to convert the local money into Australian Dollars so I know. We ordered an EPIC six course gourmet tasting menu for two people for the same price as a curry, a salad and a pizza back at our hotel.

The tasting menu started with Spicy Yellow Fin Tuna (with Isan Spices) which was like tartare only spicy. The tuna was really nice. There was some heat from the spices and some crunch too, which mum thinks might have been ground roasted rice, which added texture and flavour. 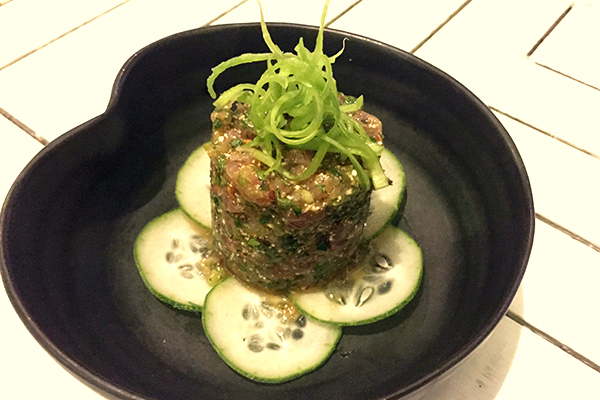 Crispy fried chicken spring rolls (served with roasted chilli dip) were like crazy long witches fingers and were the best spring rolls I ever had. I had to distract mum so I could get the last one because there were an odd number. 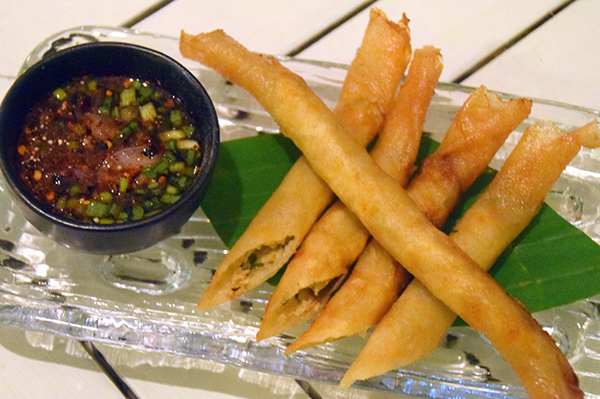 The papaya salad was crunchy and refreshing and the crab was AMAZING!!! Usually with soft shell crab I find there’s a lot of guts, air and shell and not that much meat. But these were ALL meat.  This was one of the best dishes I ate in the whole of Phuket. 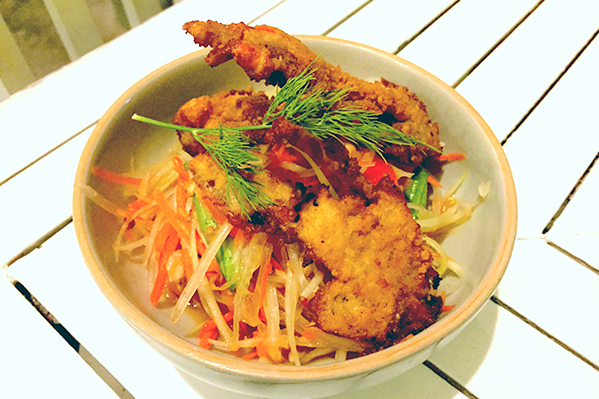 Then came these GIANT grilled River Prawns. They were so big they were more like small lobsters and they were piled with lemongrass. The smell alone was enough to make me want to marry them. 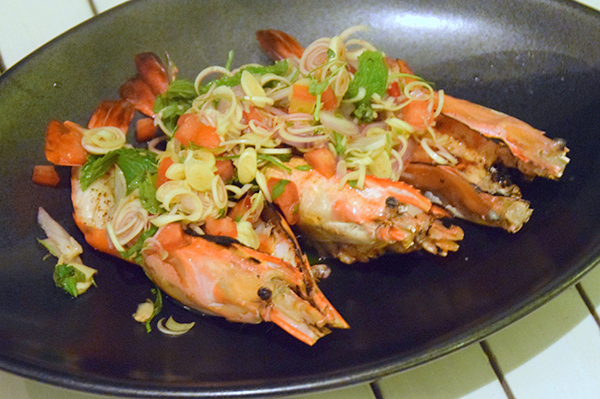 There were some shanghai noodles with pesto and squid that was like Italian, Chinese and Thai food had an accident and all mixed together to create the tastiest dish ever. The squid was so tender and there was a green chilli salsa that came with it that was so hot I think smoke came out of my ears.

The last dish on the tasting menu was Roasted Duck in Red Curry (with lychee and pineapple). 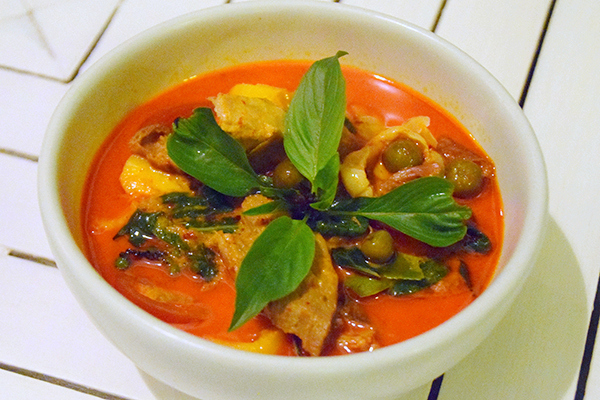 This is one of my favourite dishes and I eat it a lot back at home. But this one was really special. The duck was a bit dry compared the duck back at home but this was the same with duck everywhere in Phuket (It’s just less fatty so probably better for us). But the sauce was the BEST! It was packed with flavour and heat and there was almost a perfume to it. I think it was the fresh coconut milk or something but I couldn’t stop sniffing it. I think mum should wear it as perfume. Expect people would probably want to stop and lick her in the street, which might be a bit weird.

The portion sizes were good. Enough to make us feel content but not overly full. Though me being me I had to keep shovelling food in until I did. So we ordered a few extra things including some Crispy fried chicken wings for my sister who doesn’t like hot food so much. They were super juicy and she gobbled them down without argument, which was like a miracle. 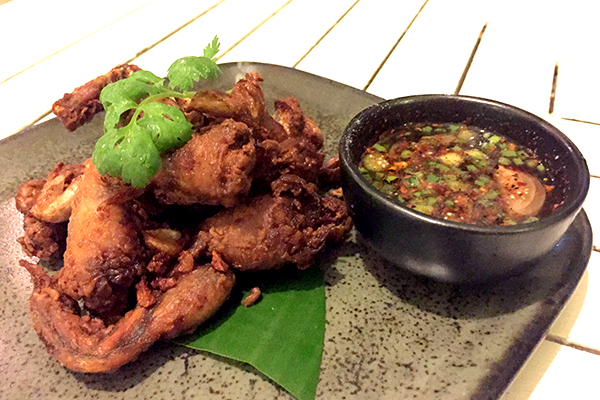 I also couldn’t resist ordering the fried frogs legs (with garlic and black pepper) because I’ve never eaten frog before. These were juicy, garlicky and crispy on the outside but I was surprised that they tasted like chicken. They also came with a really yummy hot, sweet, sour and citrusy dipping sauce.

We finished with a Baked Alaska (with mint and ginger) which wasn’t so Thai but was so, so tasty. 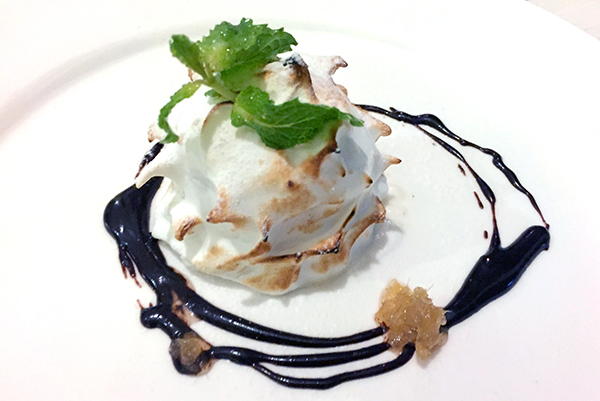 The best part of dinner was I got to meet Chef Noi (Chef Tammasak Chootong). 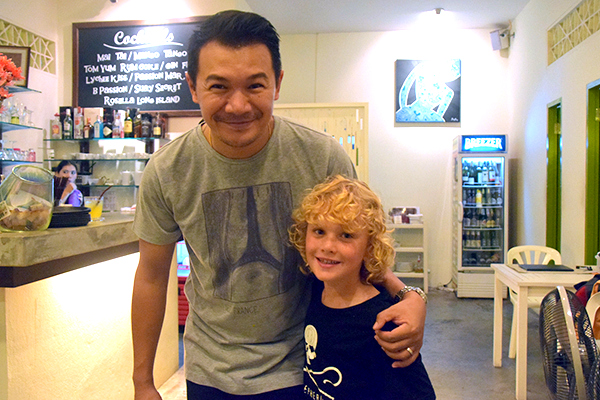 He was really friendly and nice to me and took me into his kitchen. He was chopping stuff and had ninja knife skills. 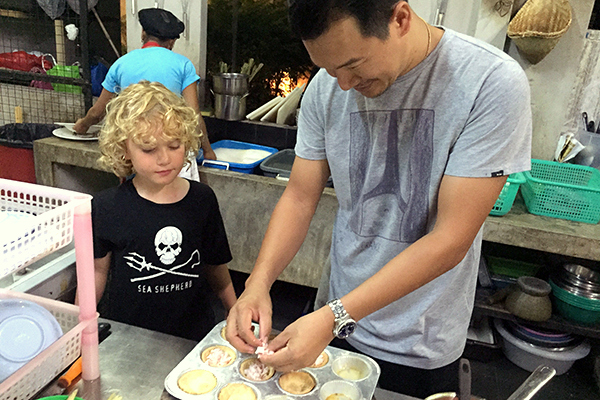 He introduced me to his wife who really nice too. She was having dinner and let me nick her food, which was marinated pork neck with blue sticky rice (the colour comes from the butterfly pea used to flavour it). Yummo!

Chef Noi told me he keeps Suay Restaurant Phuket’s prices reasonable because he thinks everyone should be able to eat quality cuisine, including locals. I think he rocks.