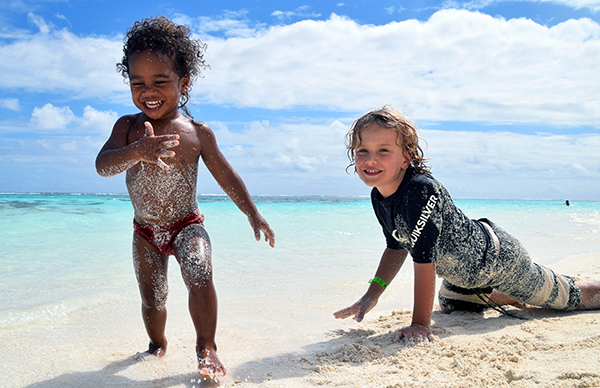 Disguising myself with my darkest glasses and a wide brimmed hat, I slip unnoticed into the shadows as my kids bury the body. Ummm… maybe I should rephrase that. It’s barely 10am, and with the sun’s heat already pounding onto the white powdery sand of Maré’s Yejele Beach, I’m determined to nab a shady spot so the kids have somewhere to rest out of the heat. That is, when they’re not throwing themselves face first in the turquoise ocean or burying their poor dad under bucket loads of sand.

Nestled inside the world’s largest lagoon, the island of Maré is a raised coral atoll and the southern most of New Caledonia’s three Loyalty Islands. And though it is just half an hour’s flight from Noumea, it is one of the Pacific’s best-kept secrets. 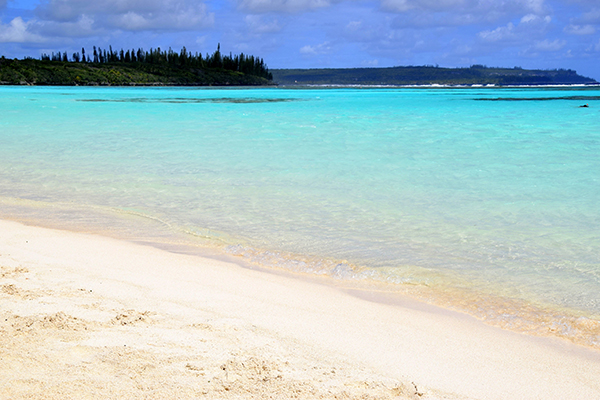 With its stunning coastline, pristine beaches, sharp limestone cliffs and an interior honeycombed with grottoes and pretty freshwater swimming holes, it is small wonder that Maré’s beauty has inspired legends. 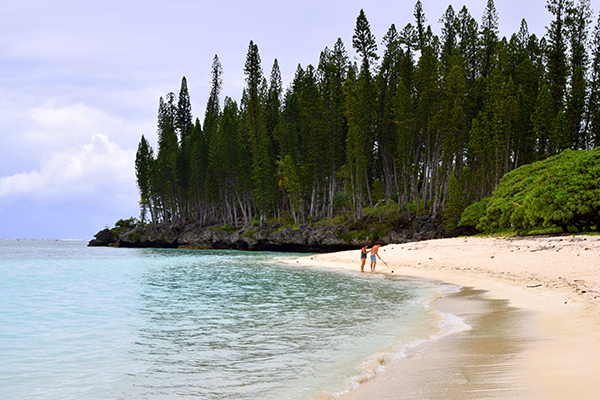 Today, it is inspiring me to take a break. A real break. Not a trawl the shops for souvenirs and find the best restaurant for lunch kind of break … because there aren’t really any. More the drop everything, pull up a towel, crack open a coconut and dig your toes in to the sand kind of break. Which is exactly what this family needs.

We’ve sailed in to Maré on Carnival Spirit, and its 2000 plus passengers have swollen the island’s welcoming Kanak population by almost 50%. 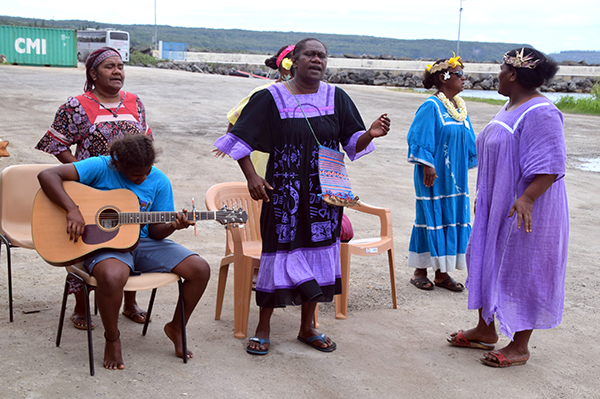 But while the cruise ship crowds bring a welcome income stream to the Melanesian island, it certainly hasn’t affected Maré’s authenticity. With little tourist infrastructure, a single hotel, few organised tourist activities and only a pop up marketplace that forms along the beach to coincide with cruise ship schedules, it’s the lack of all the usual things that makes Maré really something.

We’re first to disembark the tender at Tadine Bay, the island’s main centre, and are on the bus to the beach before the cruise ship crowds descend. Our luck in getting here early means we have our pick of the best spots on the beach, but given that on this glorious strip of sand they’re all the best spots, we settle under a tree at one of the beach.

Beside us is a young Maréan boy hacking open fresh drinking coconuts with a machete. 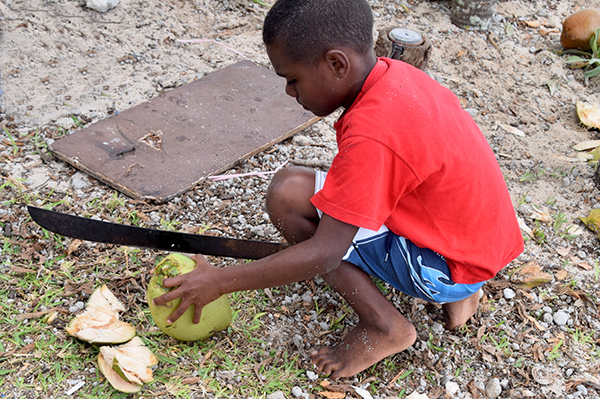 Behind us slabs of fresh papaya, pineapples, island style fish curry and huge banana fritters are being prepped in a makeshift stall. So as well as shade, refreshments and lunch are sorted! 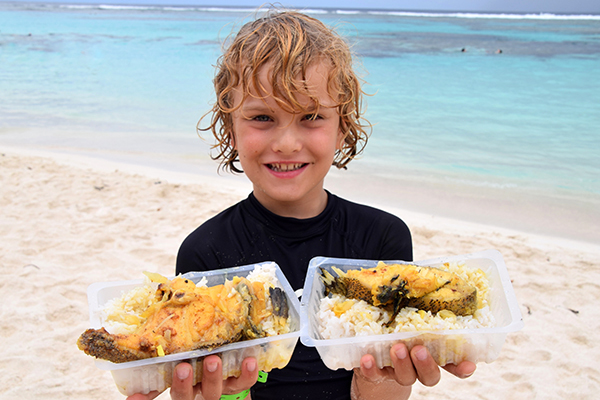 My husband, having risen from his sandy grave, has joined me to nosh on the remains of our coconuts, which my machete-wielding friend has kindly hacked in half so we can scoop out the delicious flesh. 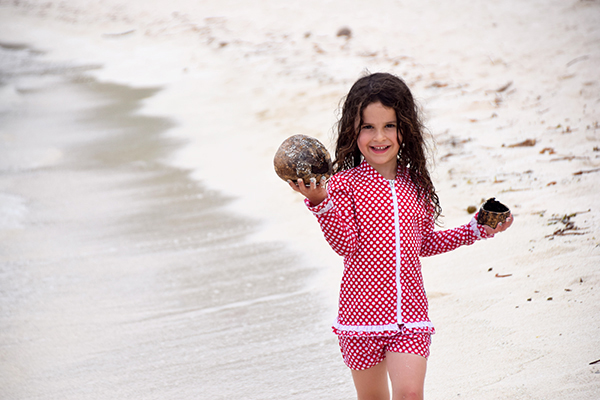 My sunscreen-slathered kids switch between gathering shells, bits of coral and discarded coconut shells to decorate their monumental sand castles, snorkelling amongst a myriad of fish and splashing about wildly in the warm turquoise water. I move only for the occasional dip in the tropical waters and a cheap but fabulous massage on a palm-leaf mat along the beach.

Perhaps the most wonderful thing about visiting Maré with kids is the connections they make. Raffles and Sugarpuff quickly befriend a couple of local kids of similar age. The Kanak children speak both French and the indigenous language, Nengoné, my kids have only English and a little Mandarin to fall back on. But they quickly discover that a combination of wild gesticulations and interpretative dance is as effective as speech. 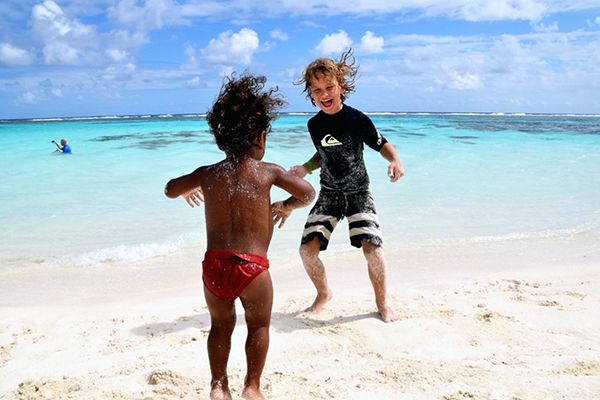 Thank goodness for that, or they’d have had to fall back on Mr Eats World’s smattering of schoolboy French, which doesn’t really stretch past ordering “un bier” and shouting inappropriate swear words, which I’m guessing wouldn’t have gone down too well with their new friends’ parents. 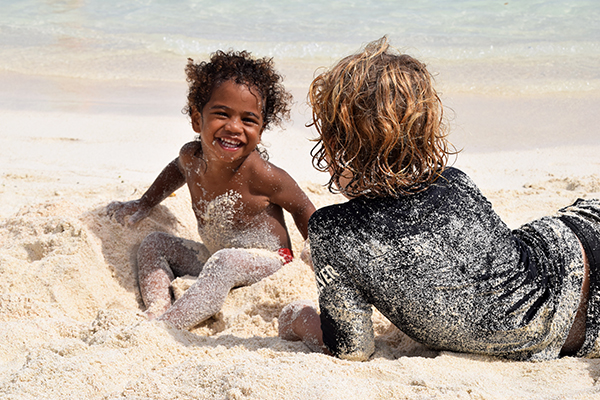 Even without the benefit of a mutual language, Raffles is like some kind of junior Pied Piper and has soon gathered a following of local tots who follow his every move and laugh wildly at his buffoonery. 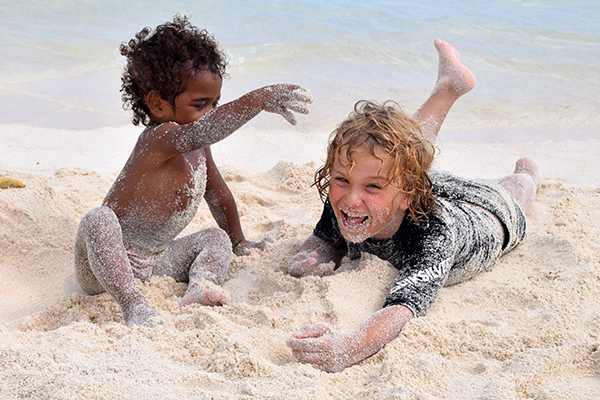 But there is one, gorgeous two-year old Alain, who takes such a shine to my gregarious boy that they practically start a wiggling, giggling dance party on the beach… when Alain isn’t pulling at his new pet human’s blonde curls or riding him like a pony into the ocean. 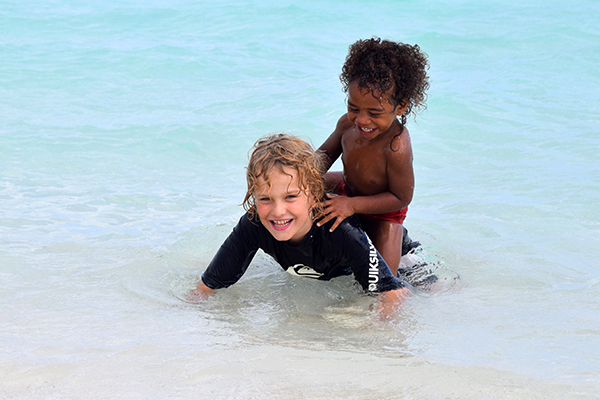 Despite Maré’s wild beauty, the warm clear water, the delicious food and gorgeous weather, it is playing with the local children that Raffles declares the best part of this visit and he is happy to entertain his little friends for the remainder of the day, waving goodbye to them and this glorious patch of paradise only when its time for us to make our way back to our fab floating home, Carnival Spirit.

24 Comments on New Caledonia with kids: There’s something about Maré