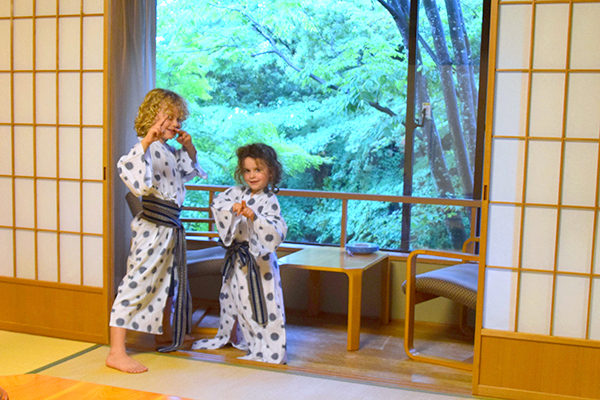 The former imperial capital of Japan, Kyoto is a tranquil alternative to the frenetic pace and energy of Tokyo. While the sprawling metropolis does boast all the mod cons and signature flashiness that one expects from a Japanese city, Kyoto is also heaven for history nuts. Especially small samurai obsessed ones.

Home to almost a quarter of Japan’s national treasures, my own apprentice warrior is following in the footsteps of samurai past as we explore some of Kyoto’s 300 Shinto shrine and eleventy thousand Buddhist temples. We soak up the tranquillity of Zen gardens, sip on matcha in small teahouses in Gion and watch as painted geisha scurry off on secret liaisons… with all the stealth of secret agents. Though garishly decorated ones… which is admittedly a little counterproductive to the whole covert thing.

However seeing is not enough for Raffles-San who trains in traditional samurai arts, sword handling and samurai etiquette. Of course, he also eats like a samurai (though when you consider the sheer quantities he knocks back, perhaps more like a sumo). But Raffles, clearly an devotee of the Strasberg school, is going full method and wants to take things to the next level and sleep like a samurai. So to fully immerse ourselves in traditional Japanese culture we’re staying in a riverside ryokan – a type of traditional Japanese inn that originated in the Edo period – alongside an ancient temple in Arashiyama. 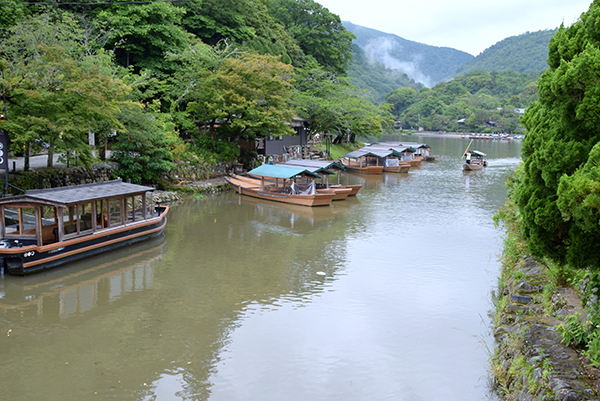 It must be said that staying at a ryokan is extremely different from staying at a regular hotel and can be a little confusing for a first timer. And they are not really what one would call kid-friendly (some do not accept children at all). If yours are the kind of kids who head straight for the in-room TV to catch up on cartoons they’ll be disappointed because in these lo-tech rooms there isn’t one. Nor is there a bed… or much other furniture, when I come to think of it.

There is tea. Oh, and sliding walls. Made of paper. But not just any ordinary paper! Really, really expensive shōji paper that tears as easily as a sheet of Reflex, which you’ll be paying to replace should your kids choose to rip it.

So would I recommend staying in a ryokan with kids? Hell yeah!

Though the path to a successful ryokan stay is strewn with all manner of complex etiquette, our kids adored the uniqueness of the experience and, in what may be a historic moment of uncharacteristic compliance, were happy to follow the rules. So much so that it may be worth considering a permanent move.

Here are our top tips for rocking your ryokan…

1. Putting your foot in it 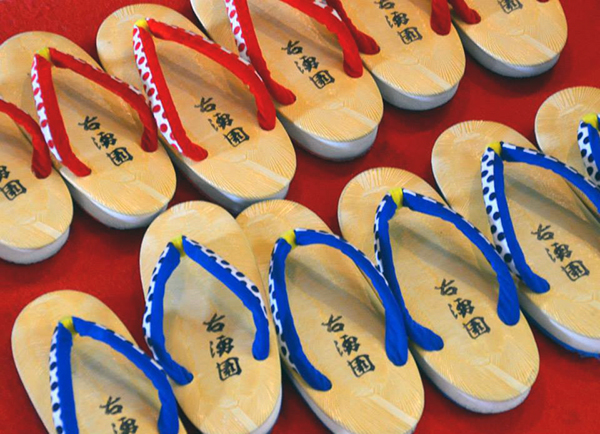 A lot of Japan’s rules of etiquette are related to feet. And nowhere is this more obvious than in the OCD confines of a ryokan. Upon arrival, you will be asked to remove your shoes and trade them for supplied slippers. The chances are these will not be attractive. But never fear, just about everyone else is wearing them and they look equally bad on everyone. If you’re worried about it you can do as we do and BYO cuter ones like the ones we found above in a local store.

Your outside shoes should remain off at all times inside the ryokan. When you get to your tatami-matted sleeping quarters, you must also remove your slippers before stepping on the straw flooring, which should be trod upon only in your socks or bare feet. If this all sounds a bit complicated, just wait until you need to visit the toilet. Special toilet only slippers are provided at your bathroom door. Just don’t forget to remove them afterwards, a rookie mistake. And yes, I made it! 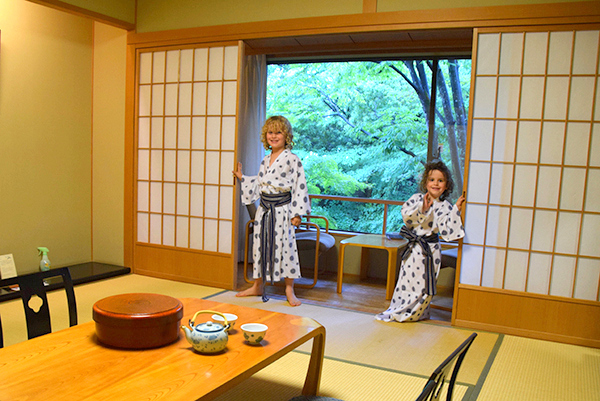 It is traditional when staying at a ryokan not only to lose your shoes but also your entire kit. You’ll find yukata – kimono-like-robes – in your room. Wear them, even in the public spaces and gardens. They’re cool and comfy but there is etiquette to follow when wearing one.

Firstly, don’t go commando. Men should remember that this is not the time to show of your manly chest or flash your gold medallions and women need to put their cleavage into hibernation. While you are bound to bump into a couple of robe-clad old dudes smoking cigars, you are in a ryokan not the Playboy Mansion.

The most important thing to remember is that the left side of your yukuta should always be on top or you may frighten other guests into thinking it’s the zombie apocalypse as tradition says only corpses are to be dressed with their robes right-over-left. Dead set!

Japan is like a giant kettle, water quite literally percolating out of its ground in more than 3000 locations. These hot springs are known as onsen and traditional baths filled with their healing hot spring waters are a big part of the ryokan experience. But these public baths too can be fraught with etiquette danger!

It’s not the place to show us your tatts. If you have tattoos you’ll need to check the onsen’s policy as tattoos are banned from many shared baths due to their association with the yakuza, Japan’s notorious mafia.

Then there are the procedures. You must wash yourself thoroughly on one of the little wooden stools supplied in the onsen shower before entering the generally gender exclusive communal hot springs. In the actual nude. Did I mention that bathing suits are forbidden in the onsen? This of course means that everyone else is also in the actual nude, which can be a bit disconcerting to a first-timer. And by “bit” I mean, “OMG everyone is freaking naked and there are genitals all over the place, where the hell am I supposed to look?”

Within 15 seconds you realise no one cares. No one is looking at you. Another 15 seconds later you too will cease to care as it will dawn in you that the water is so freaking hot that you’re skin is blistering and you have become an ingredient in some kind of macabre human soup.

It takes a further few minutes to acclimatise to the heat and then the relaxing begins. And it really is relaxing. It’s also empowering to be in a room full of naked folk where no one is judging you and no one cares if your bum is bigger, boobs are saggier or your skin wrinklier. Which is fortunate, as I would proudly win on all three counts.

Kids are welcome (though obviously they need to be toilet trained) when accompanied by a parent but the water is extremely hot and kids used to playing in regular pools may get a little bored with the concept of silence and stillness. Note:  Incessant whining is not conducive to relaxation.

Oh, and though you really shouldn’t need to be told, leave your camera behind. It’s not the time for happy snaps. 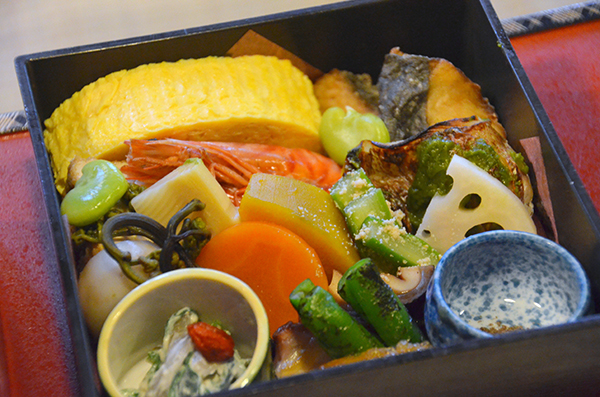 The fee for a night at a ryokan is generally (though not always) inclusive of both dinner and breakfast. But, unless you like Japanese food be prepared to starve. ryokans only serve seasonal, local foods. With chopsticks. And given that most of the ryokan staff don’t speak English, the traditional evening kaiseiki, a multi-course dinner that can include up to 15 dishes, can become a game of guess the ingredient. Breakfast is not dissimilar. Don’t expect bacon and eggs or pastries. Think rice, miso, pickles, fish, and vegetables. And, if your ryokan happens to be in Arashiyama, tofu… lots and lots of tofu. 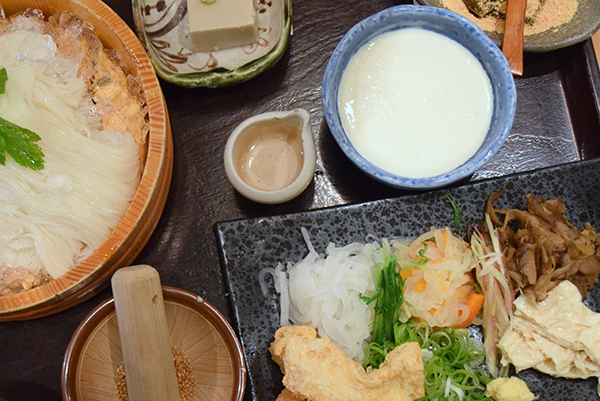 The presentation of each dish is incredible, with chefs treating their food as works of art, but they are not for the fussy or faint of heart. Luckily, we’re neither and we love it!

The lack of furniture can cause alarm to first timers but do not fear, at some point (usually around dinner time) the futon fairies will enter your room and make your mattresses magically appear. That’s right, mattress. No beds. You will be sleeping on the floor. But that’s ok because the futon mattresses, though on the lean side, are freakishly comfortable. And for my giggly offspring, the experience is an indoor camping fantasy come true. In fact, my wee samurai were disappointed when they had to revert to “boring old beds” in our next hotel, much preferring to dream of epic battles from a tatami-matted floor. 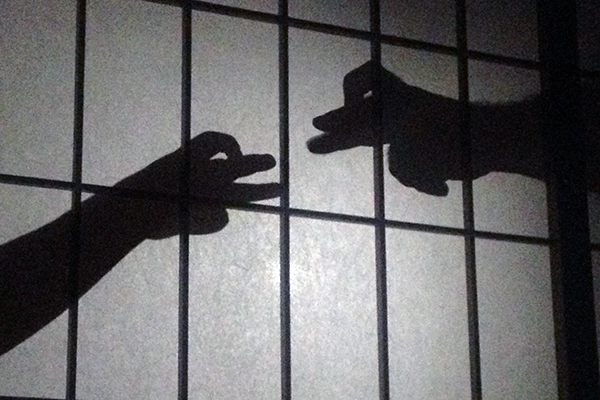 So what does one do in a ryokan room to keep small children entertained? Ryokan Shadow Puppet Theatre, of course. While it’s hardly Shakespeare, many hours of giggles and family-friendly silliness ensue from combining a torch, sliding shōji paper doors, and a little creative license. At our ryokan we are even able to fetch refreshments for our (self-made) show as a vending machine dispensing perfectly alcoholic cold beer and sake is conveniently located right outside our room! Now that is entertainment. 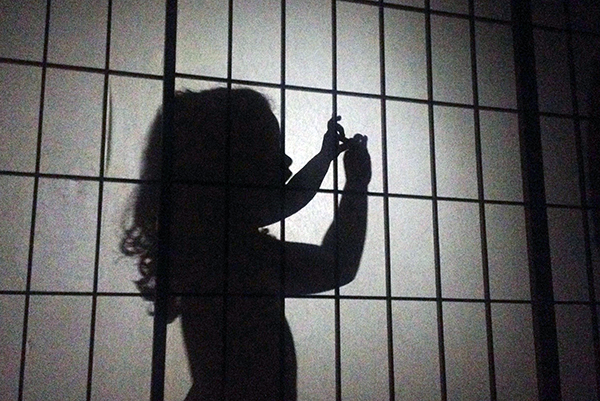 24 Comments on 6 tips to rock a Ryokan with kids