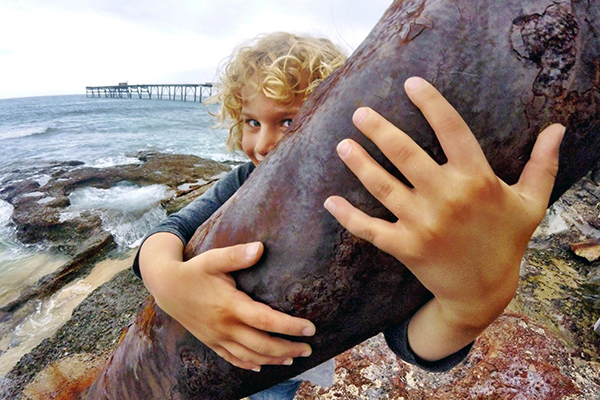 Anyone who follows BoyEatsWorld on Instagram may have noticed that we’re more than a little obsessed with our new GoPro … so much so that I’m expecting my SLR to stage an intervention.

This new found addiction to happy snappery GoPro style is not due to some latent fondness for hurtling ourselves off buildings clad in nothing but superhero costumes, swan diving out of airplanes (to be honest I’m not even that keen on them when I’m sipping champers in business class) or catching five-metre waves whilst doing handstands and weaving macramé hats with our toes.

Nope, though we may be fearless with food, when it comes to the action and adrenalin stuff we’re pretty much your common or garden-variety chicken-shits. But it turns out that GoPros aren’t only for thrill seekers. They’re also cool for cowards.

Whether we’re drowning in a sea of selfie-sticks at some busy tourist trap, cycling along a scenic pathway with the kids or just splashing about in a resort pool, our GoPro is capturing epic images and videos like we’ve never been able to before. And we love it.

Here are 12 reasons why we suggest packing a GoPro for kick-ass family holiday footage.

Compact enough that you can chuck one in your back pocket or handbag, they’re also just the right size for tiny hands. Hand one over to a baby or toddler to capture some of the most ridiculously cute selfie action you’ll ever see. And you won’t need to worry about chopped off heads. The extremely wide angle compensates for your tots camera skills, or lack thereof. As demonstrated by our über cute 18-month old neighbour and photobombing son here. 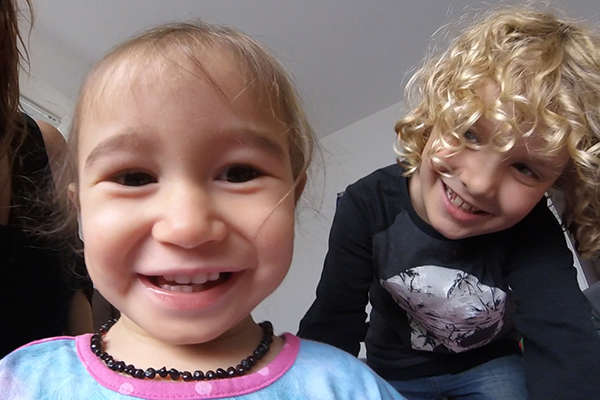 If a GoPro can survive being tossed out of an airplane, tearing down icy black runs or even a day of deep-sea diving with sharks, it should be just about strong enough to survive kids. Waterproof and shockproof, these babies are built to withstand any amount of drool, dribble, spills and bashing the kids can dish out. In fact, Raffles managed to drop his Hero+ in a bowl of steaming curry on a recent trip to Singapore and, except for the fact that I had to stop him devouring it, the camera came out of its spicy misadventure as good as new, though admittedly a tad fragrant.

3. You can take them literally anywhere

The amazing range of accessories means you can clamp your GoPro onto the handlebars of your scooter or bike, mount it on your skateboard or surfboard or stick it to your car with a suction cup for creative action videos and stills. Strap the GoPro on the kids with a wrist strap, head strap, or a Junior Chesty harness for really cool footage taken from their unique perspective. If your kids are into sport, you can even attach it to their racket, bat or strap it around their ankle during their next football match for extreme close up action shots. Rocking Raffles has even taken to shooting himself doing his best Hendrix impersonation.

4. Kids love making movies with them

Raffles and Sugarpuff both love experimenting with all the different modes on our Hero+ and Hero4, which in turn takes the onus off me to capture all our family holiday snaps. These days I even manage to make it into the occasional picture, which is handy as up until recently there was no evidence I actually existed. It’s easy enough to edit the footage and add a soundtrack on your computer with the free GoPro Studio software that even Raffles can manage (with a little help). Given the lack of bloodshed and f-bombs, Tarantino is hardly quivering in his director’s chair, but Raffles is having loads of fun creating movies instead of watching them.

5. They make for an awesome icebreaker

Unlike his generally camera-shy mother, Raffles loves a selfie. And he loves asking people to join him in them. Even monks. On a recent overseas trip, Raffles made a point of asking everyone on our trip, from resort staff to our flight attendants, to join him in his selfie action. Most people seemed pretty stoked to be asked which meant he had loads of new BFFs by the end of our holiday. Incidentally, after all this cinematic ego massaging, we were on the receiving end of some top-notch service. Keep up the celluloid schmoozing son! 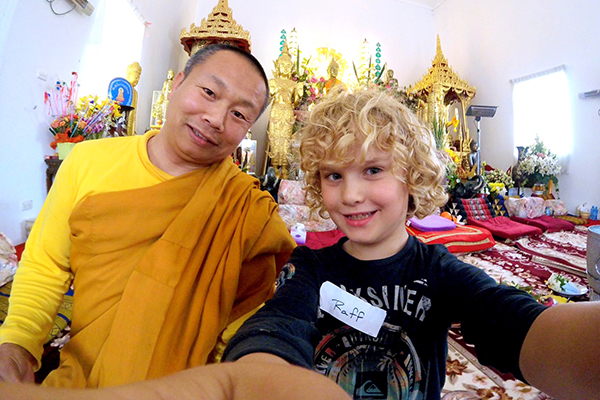 6. They can actually keep up with your kids

They’re great for taking stills of fast moving scenes and let’s be honest, when attempting to photograph my kids that’s pretty much the entire freaking time. The GoPro’s Burst Mode can capture up to 30 images in a few seconds … and generally one of those will capture a perfect moment.

7. The image quality is outta sight

Whether you’re shooting stills or video, the image quality is pretty damned good. If you’re particularly particular, the Hero4 has adjustable settings so you can shoot at a higher bit-rate on video modes as well as adjust white balance, colour tuning, ISO limits and exposure thingies (OK, so I may need to brush on my technical jargon). But if you’re a beginner just hit the on button and you’ll be pretty happy with the results. 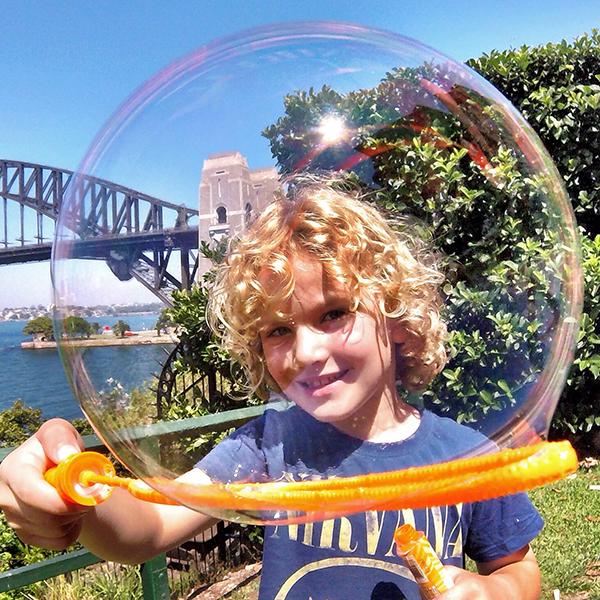 The 170-degree wide-angle lens allows you to capture some amazing scenes that a normal camera can’t. It’s especially great for snapping selfies without losing the backdrop – which is great for travelling. Raffles and I love working with the distortion that comes with ultra wide-angles to create epically twisted perspectives of our own little GoPro hero. 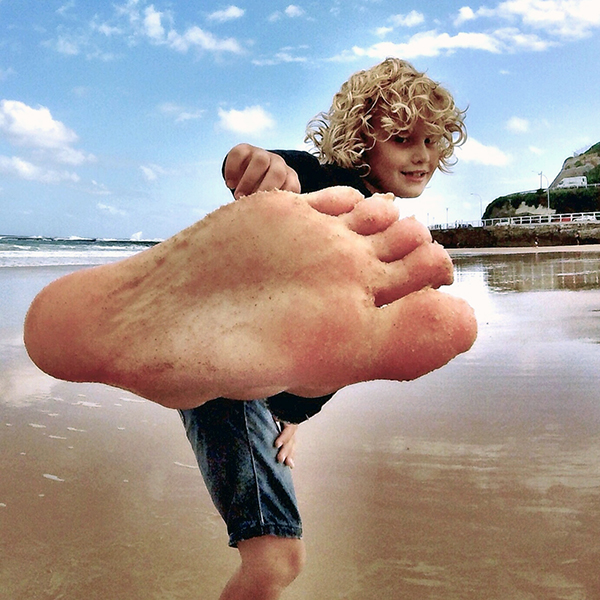 Literally, just lick the screen and you’ll prevent water droplets forming on the waterproof camera. That way you’ll capture incredible underwater footage of your water babies doing their thing in the pool, at the beach, snorkelling, or even on a dive. Pair with a floaty handle and you wont even need to go fishing for it at the bottom of the sea when the kids drop it. 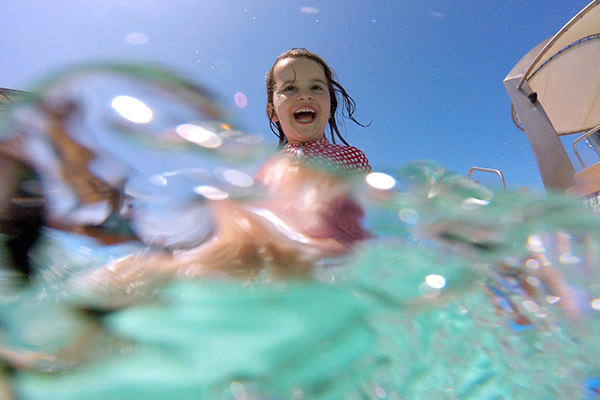 If it didn’t happen on social media, it didn’t happen at all, right? Thank goodness there’s a free GoPro app, compatible with most smart phones and tablets, so you can edit your images and upload them on the spot to your preferred social media platforms. Don’t forget to tag #GoPro and #GoProANZ to share your happy snaps with the world.

You can use the app to watch a live preview of what your camera is filming and remotely turn it on and off, even while the kids are going nuts with it in the pool!

The basic HERO+ LED camera, which is ideal for families, is waterproof and shockproof, features easy to use 1080p60 and 720p60 video, 8MP photos, built-in Wi-Fi and Bluetooth, and the convenience of a touch display. And comes in at about AUD$400 … bargain enough that you can afford to spend up on all the amazing accessories!

Disclosure: While I may sound like a GoPro Evangelist this is NOT a sponsored post – just the ramblings of a newly addicted fan.