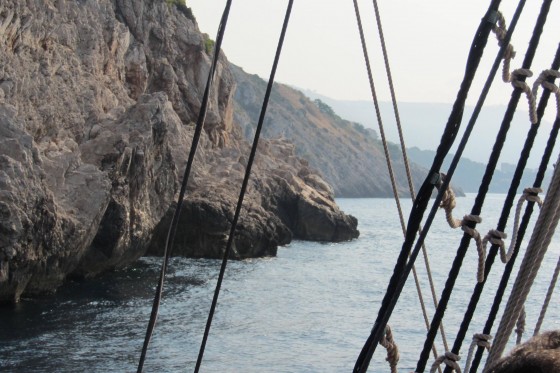 “Land Ahoy” shouts Raffles, between a volley of “Arrhhs’ and “Yo ho ho’s”. As you do when sailing in to Dubrovnik’s Old Town on a timber galleon. The tiny traveller is convinced it is a real life pirate ship and, in a strange twist, it would appear the skipper concurs – proffering my small swashbuckler a feathered pirate hat, vintage gun, fake parrot and the wheel, before promptly disappearing into the ether. 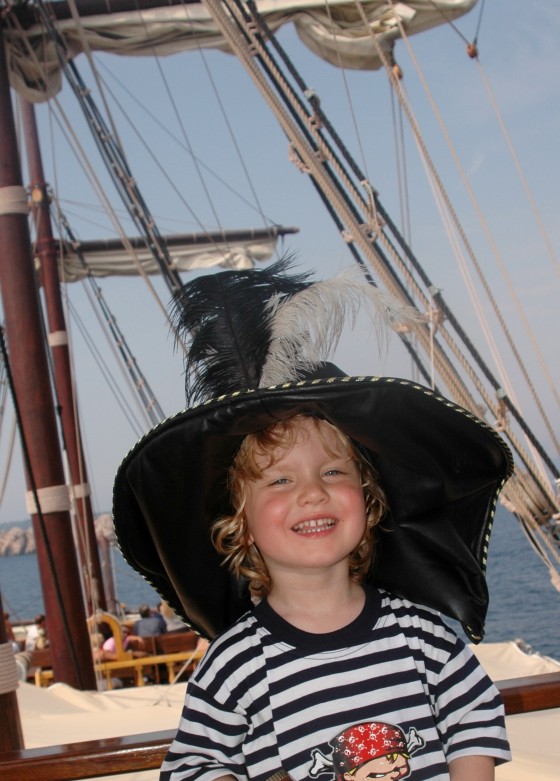 Our fellow passengers (all hundred or so of them) are blissfully unaware that they are now sailing under the captaincy of an armed and delusional pre-school pirate who can’t even see over the wheel. 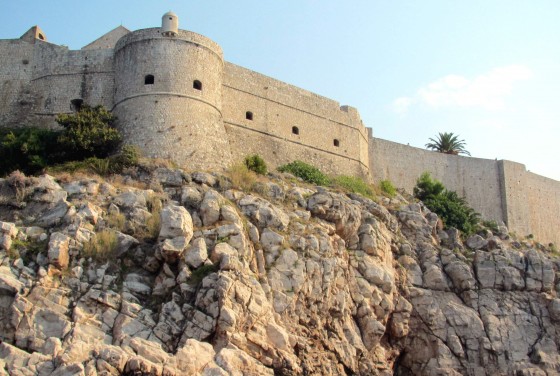 Envying them their blissful ignorance, Mr Eats World and I quietly soil ourselves and wonder where the hell the erstwhile skipper has buggered off to. Edited highlights of my life start flashing before my eyes and I pray to any God who’ll listen that the absent mariner thought to set the boat on some kind of aquatic auto pilot before he vanished.

It is our first time in Croatia and though there’s so much we want to see and explore across this beautiful country, from Zagreb to Plitvice Lakes and everywhere in between, its looking increasingly likely we wont see any of it because we’re going to die at the hands of a pre-school pirate.  A good five minutes pass before the skipper nonchalantly returns to his post with a casual “bok” (hello). Deranged though he clearly is, we’re incredibly happy to see him and mightily relieved that somehow Raffles managed to avoid crashing into any of the sharp pointy bits of the rocky Dalmatian coastline. 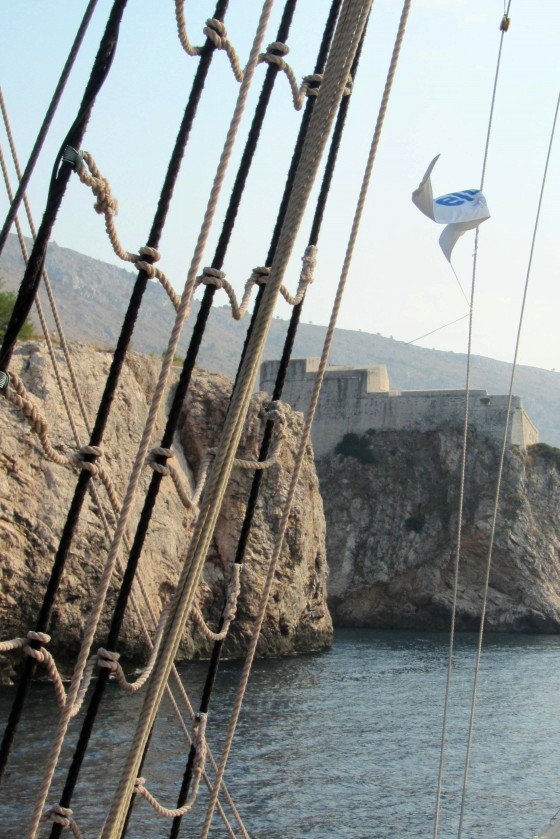 Kapetan Crazy once again takes command of his ship and our pulses settle to a more steady pace… only to start racing again just minutes later as we reach the fortified medieval walls of the Old Town and sail into its movie-set harbour. 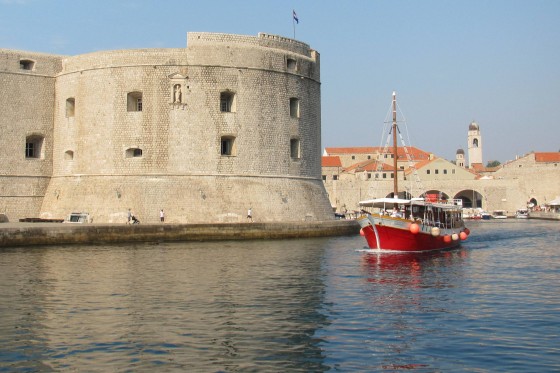 As testament to his devotion to his new found career, Raffles has stowed away behind a timber staircase, announcing that he’s “a real pirate now” and intends on staying with his ship forever. You reckon, sunshine?

There’s so much to see and do in Dubrovnik with kids but we’re on limited time with just a few hours to explore its delights, as there’s a hulking cruise ship waiting to sail us to Ravenna in Italy. So we decide to keep it simple, focusing on the main street and filling our bellies.

Forcibly removing our kicking and screaming baby buccaneer from the galleon of his dreams, we enter Dubrovnik Old Town as nature intended… that is if nature intended that we should be wrestling a recalcitrant pre-schooler and his wriggling sibling. It’s early enough in the morning  that the city hasn’t been overtaken by the hordes of tourists that are sure to descend at any moment.

We step into The Stradun, Dubrovnik’s pedestrian main street that stretches almost 300 metres from gate to ancient gate, and are staggered by its fairy tail prettiness – only a few strolling locals, a busker and a family or two of pigeons dotting its gleaming expanse.

The limestone-paved street has been polished to a glassy sheen by years of use and is so shiny and smooth that we have to stop ourselves flinging of our shoes and sock-sliding past the spectacular Renaissance confection that is the Sponza Palace, the uniform rows of pretty green window shutters, fountains, statues, Baroque churches and bell towers all the way to a Franciscan Monastery and Pile Gate, the city’s main entrance, at the other end. 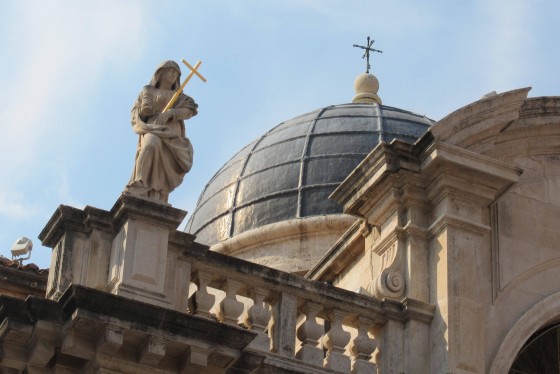 Off the main promenade we weave our way through a maze of narrow cobble-stone lane-ways that cut through the old town, the occasional scar of shrapnel damage the only reminder still visible from the conflicts of the early 90’s which saw the city under months of violent siege. 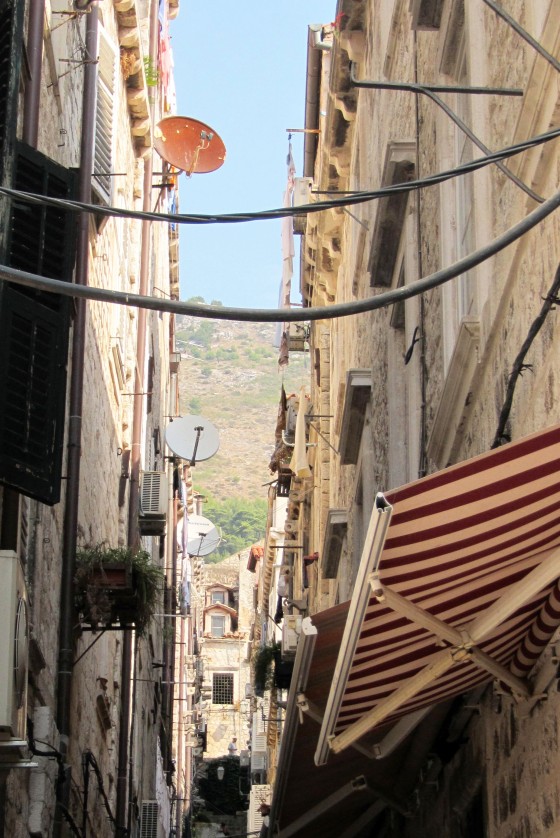 We stumble upon Gundulićeva Poljana, a pretty baroque square overlooked by an enormous statue of a 17th century poet of the same name, though better known as Ivan to his mates. It is market day and the square is a heaving mass of red and white umbrellas sheltering table after table of brightly coloured fresh fruit and vegetables, local cheese, olives, honey and spices. 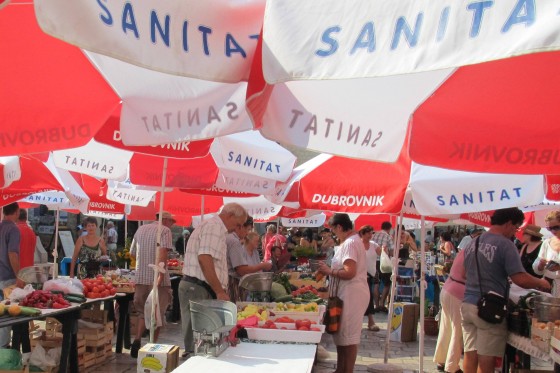 A legion of local cats encircle the market waiting for the exact right moment to pounce on the gluttonous goodies. While the kitties seem more interested in procuring produce of the pesce variety we can’t resist the crimson temptation of a bucket of fat and fabulous raspberries.

Raffles and I feast on our luscious load as we wander around town, the juice staining Raffles chin as he greedily gobbles his share… and most of mine.

But the raspberries are just an appetizer and lunch is beckoning.

Dubrovnik is a city of seafood which suits us (and the local felines) just fine. Dining is heavily influenced by Italian cuisine, as evidenced by the proliferation of pasta, pizza and risotto crowding every menu. Tuna, shellfish, calamari, squid and octopus are staples and popular local dish crni rižot (cuttlefish risotto) is not only one of the more obvious nods that Dubrovnik makes to Venice but one of its tastiest.

The dish, dyed an inky black by breaking cuttlefish ink sacs onto the rice at the end of the cooking process, initially horrifies my wee pirate boy but any fear of its startling appearance is soon belted away by its flavour packed punch. Though I draw the line at his attempts to use a plastic cutlass as cutlery. 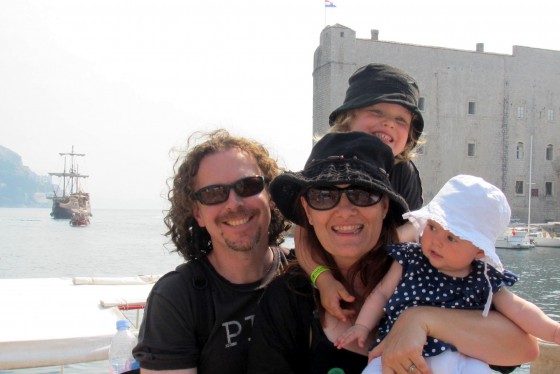 In fact, as we await for Raffles ‘pirate ship’ to fetch us for the return voyage we agree we’ve all been pretty knocked out by the beautiful seaside town.

25 Comments on Croatia with kids: Pirates of Dubrovnik