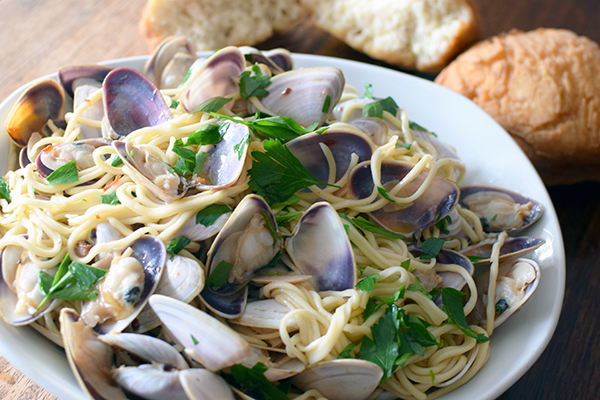 Italy’s enchanting Ravenna is a treasure chest of art, history and culture and though it may not be as famous as Rome, Florence or Venice, it’s a little slice of heaven for art lovers, literature lovers and history nuts. And, as it turns out, gluttonous seafood loving pre-schoolers.

The extraordinary little city was once the capital of the Western Roman Empire, the Ostrogothic Kingdom and the Byzantine Empire.

And to this day remains liberally littered with the remnants of its glory days and eight incredible UNESCO World Heritage listed monuments.

We visited a few years ago and happily strolled through its light flooded squares, spotting graceful domos and pretty palazzos. 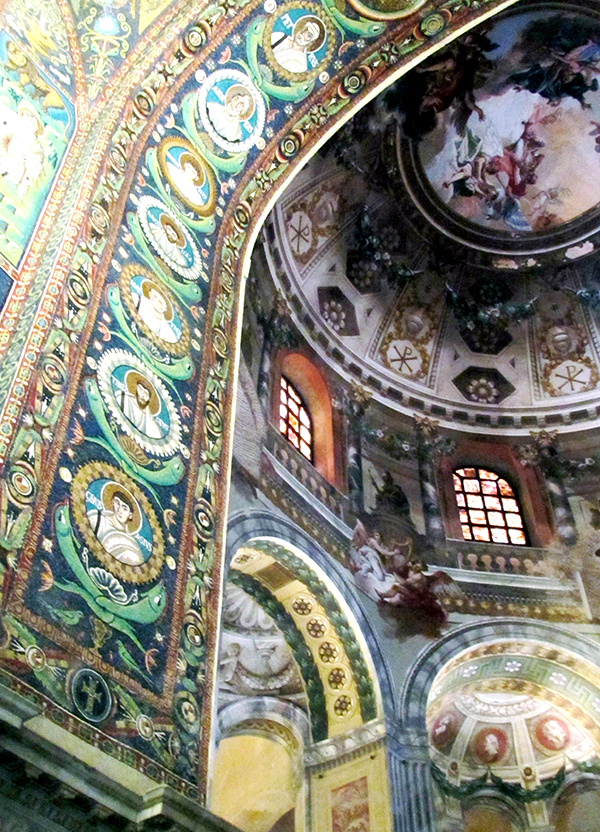 We explored foreboding basilicas and baptisteries with interiors bedazzled in a riot of tiny sapphire blue, turquoise, green, red, white and gold tiles. 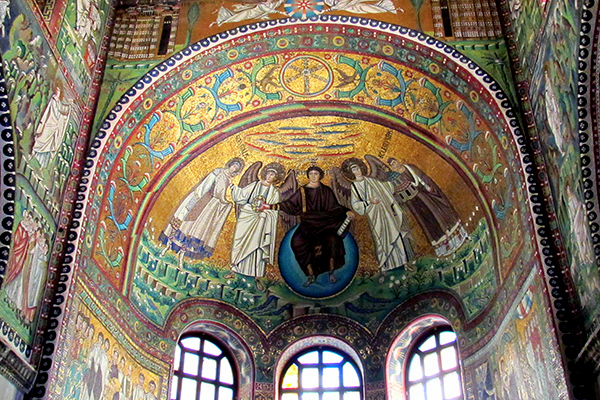 Mosaics so enchanting that Cole Porter was inspired to write Night and Day after seeing the starry mosaic sky of Galla Placidia. 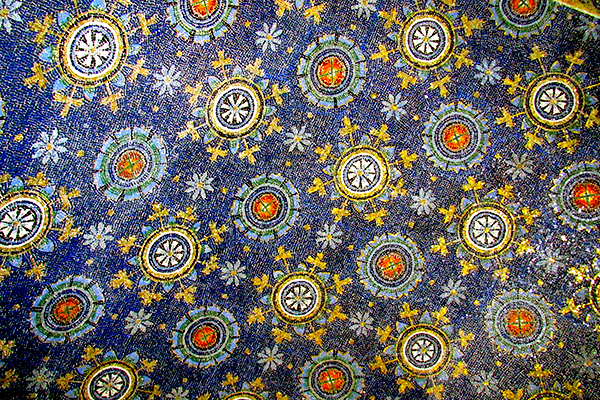 Like Mr Porter, Raffles too was left dumb struck by the beauty of the sparkling mosaics. Though as a pre-schooler was more inclined to bust out Twinkle Twinkle Little Star.

But it was later on our exploration that my son was left even more stupefied at the sight of his melodramatic mother having conniptions as he prostrated himself at the small marble tomb of the divine poet, Dante Alighieri. 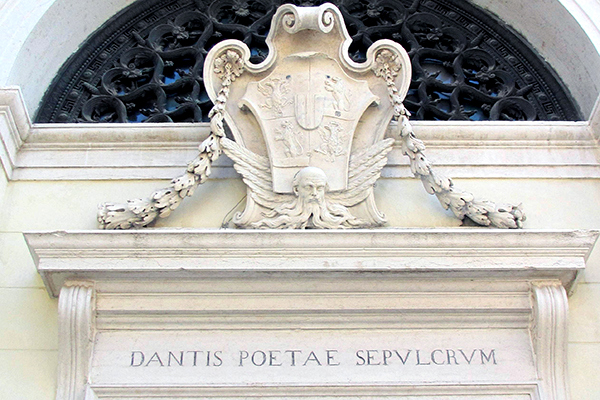 Indeed, he may actually have been so embarrassed that he thought he was actually on a journey to the nine circles of hell.

But given this was Raffles, even at the ripe old age of four, he was only interested in descending to the Third Circle of Hell, Gluttony, the place reserved for those who overindulge in food. And Ravenna, located on the sea, provides him with plenty of wonderful cuisine for him to get a foot in the door.

We chow down on local specialities including cappelletti (filled pasta) and piadina (flat bread) and a delectable seafood soup, but Raffles goes rogue with a plate of spaghetti alle vongole (spaghetti with clams), the shells of the baby clams dotting the pasta just like tiny mosaic tiles.

You see, while spaghetti alle vongole is very popular throughout Italy, and there is plenty of fresh seafood in in Ravenna, it is not really a traditionally local dish. But it is here in a pretty rustic courtyard near the Arian Baptistry – that Raffles got a taste for the classic dish. While the restaurant where we dined has faded in my memory, quite possibly due to the effects of the bottle of Sangiovese I guzzled, my seafood loving son often recalls his first, though not last, introduction to spaghetti alle vongole and has been begging for me to make it at home ever since.

So with the arrival of a brand new pasta maker for my beloved KitchenAid Mini just begging to spit out some fresh strands of pasta, and a kilo of fresh pippies from the local fish markets on hand, I could think of no better time to indulge his desires, though I’m adding a little salty, porky twist with a handful of flat pancetta.

In true Italian style, we made the pasta making a family affair. Sugarpuff was in charge of making the dough using the Mini’s bowl mixer, which we left to rest for half an hour. 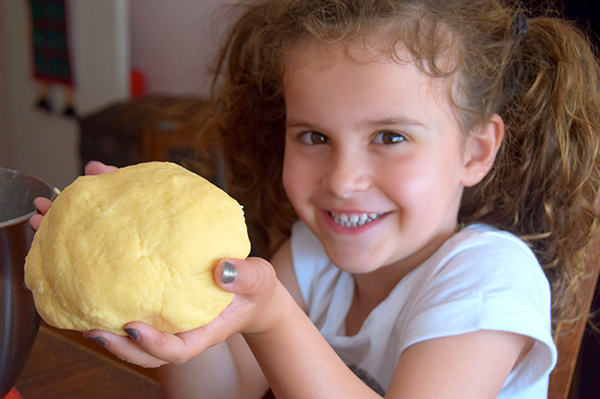 Raffles then started rolling the ribbons of silky pasta dough. 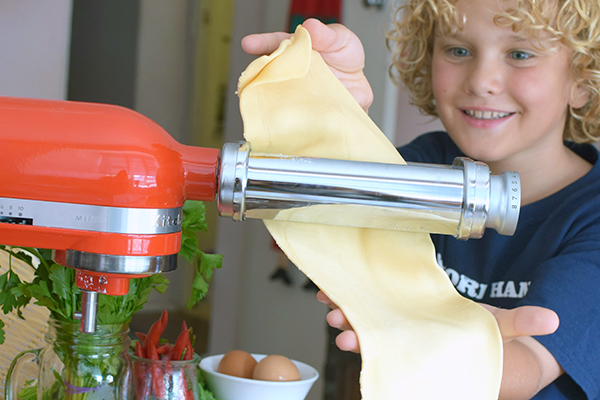 Then ran them  carefully through the cutters. 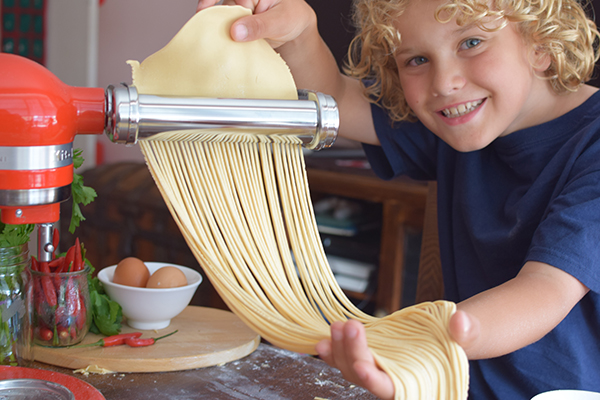 The end result is silky smooth strands of spaghetti. 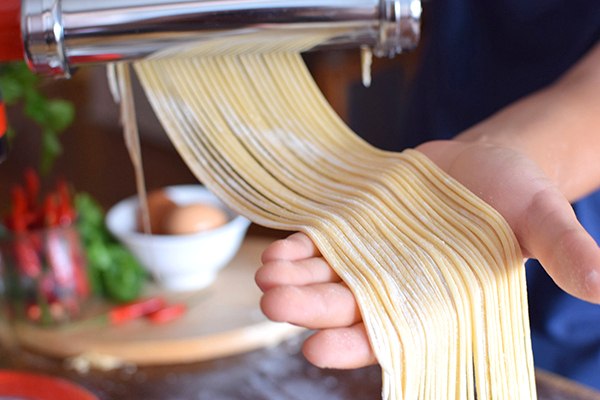 Which proved a perfect vehicle for the lightly liquid sauce of the vongole, a dish that is as pretty as any Ravennan mosaic… and left me with two children who claim they’ll never eat store bought pasta again. 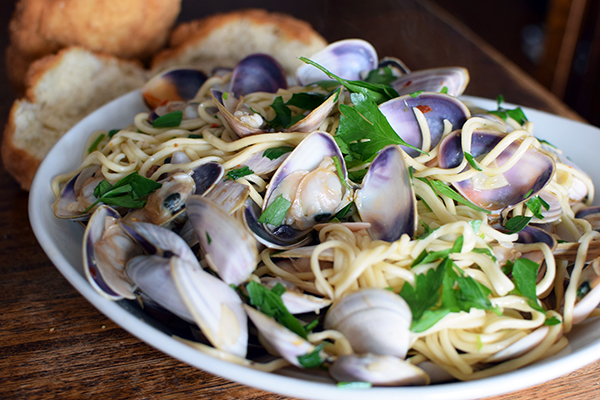 Method
To make pasta break eggs in too a measuring cup to measure 7/8 cup (add a little water if necessary).
Add flour and salt in the mixer with flat beater attachment.
Slowly add eggs and mix for 30 seconds at low speed.
Replace attachment with dough hook and kneed for a further two minutes at low speed.
Leave to rest for 30 minutes.
Run dough in small pieces through the pasta roller until smooth and silky, then cut using your preferred attachment.
Put a pan of water on to boil with a good pinch of salt.
For the vongole place a large pan with a lid on a high heat with olive oil.
Add the pancetta to lightly brown then set aside.
Add garlic and chilli to oil.
Once the garlic starts to colour, quickly add in the pippies and wine. Give everything a good shake and cover with lid.
After two minutes, add fresh pasta to water (prepare pasta earlier if you are using dry pasta).
After another two minutes the clams should all be open.
Take the pan off the heat and remove unopened clams.
Add pancetta.
Drain your pasta and add to the clams with an extra drizzle of extra virgin olive oil.
Cook for a minute or two, flipping occasionally, to allow the juice from the clams to be absorbed by the pasta.
Add a splash of olive oil, parsley leaves, salt and cracked pepper and serve.

Disclosure: The Eats World received a KitchenAid Mini to trial but all opinions and recipes are our own.