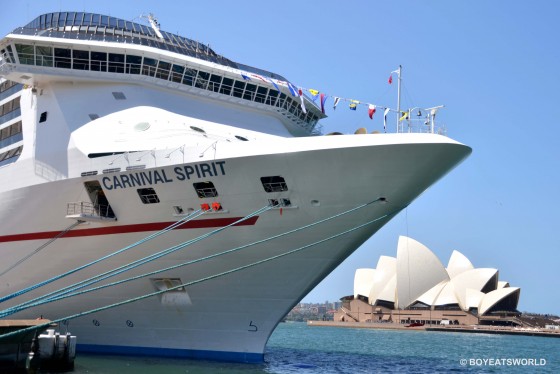 Raffles, Sugarpuff and I are sitting by the Harbour waving our old friend and resident megaship, Carnival Spirit, out of Sydney. It’s been a wee while since our clan of clowns ran away to join her cruising circus but watching folk frolicking merrily on deck as she sails gracefully away has us reminiscing about our own shipboard shenanigans. 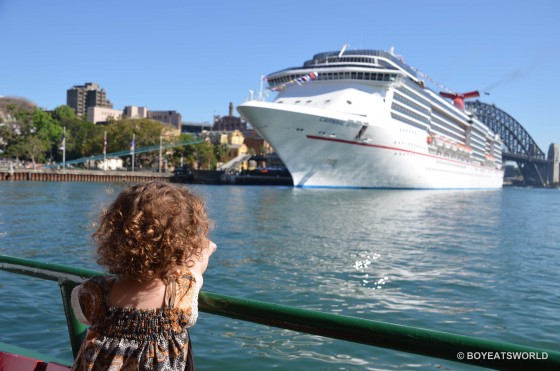 A cruise on Carnival Spirit had been sold to us as a holiday where every guest of every age can set their own pace. Now, given that on a scale of one to ten Raffles and Sugarpuff go to 11 on a quiet day, there’s no prizes for guessing at what speed we spent most of our time.

We also knew that our short cruise would only offer us to sample a few of Spirit’s many temptations so, once we’d unpacked in our stateroom which incidentally came complete with enormous balcony and bath tub (fist pump), we made a hit list to make sure we missed nothing. 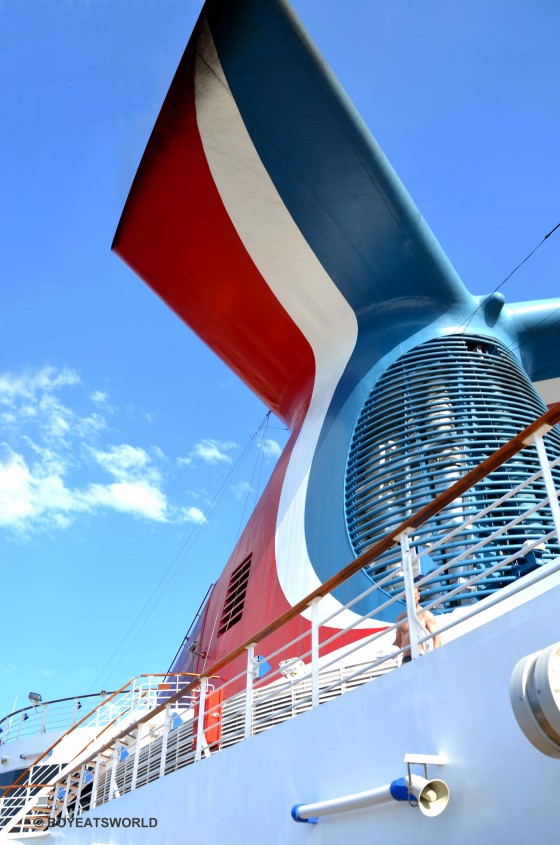 To get the obvious priority out-of-the-way we started our Carnival Spirit experience at La Playa Grill, the ship’s casual style buffet and just one of 20 restaurants and bars on board. We indulge in a slice or seven of the excellent made-to-order pizza and some barista-style coffee, for us of course, not the kids. Could you imagine adding caffeine to those two nutters, they’d become airborne.

After our leisurely lunch we stumble across a soft-serve machine and ticked another chocolate and vanilla flavoured must-do off my boy’s cruising bucket list. As an ice-cream fuelled Raffles kung-fu danced his way at high speed around the ship we happened to stumble across Fat Jimmy’s C-Side BBQ, an open air American style char-grill. This proved a slight problem as we’d already eaten a small mountain of food. But it was irresistible so I grabbed a little of their pulled pork for a taste. It was good. So good in fact that my wee boy, whose spare stomach had already kicked in, insisted on a whole pulled-pork roll of his own and we watched on in gobsmacked awe as he devoured it … I swear that given the chance that kid could eat a hole in the space-time continuum.

The sparkling pool beckoned but a little digestion was required so we resisted its watery temptation and instead hit the 18-hole mini golf where I had my my arse handed to me by a 4-year old. Twice. 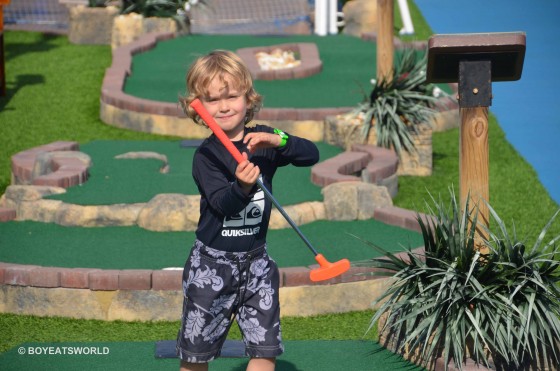 Humiliated by our mini-golf thrashing, we set off for Carnival Waterworks and the SplashZone area where we let both kids loose among the tangle of mini-slides and waterplay equipment while we plotted our parental revenge! 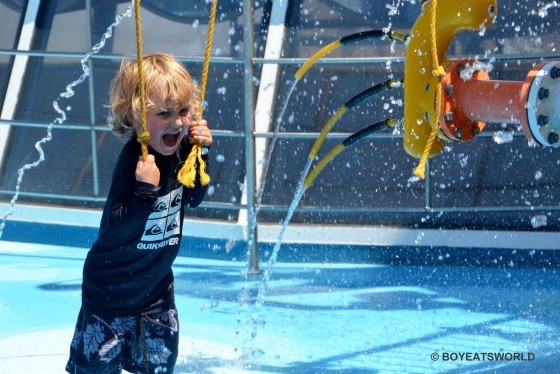 Something that proved easy when an unsuspecting Raffles copped a drenching from a giant tipping bucket full of water. 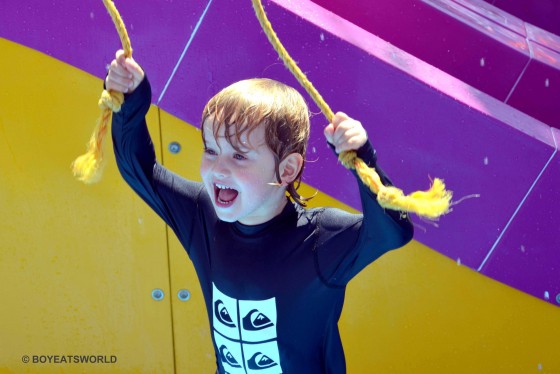 The kids played happily for hours in the Splash Zone, slipping this way, sliding that way and generally enjoying the watery wonderland until it was mummy’s turn for a bit of wet and wild fun. 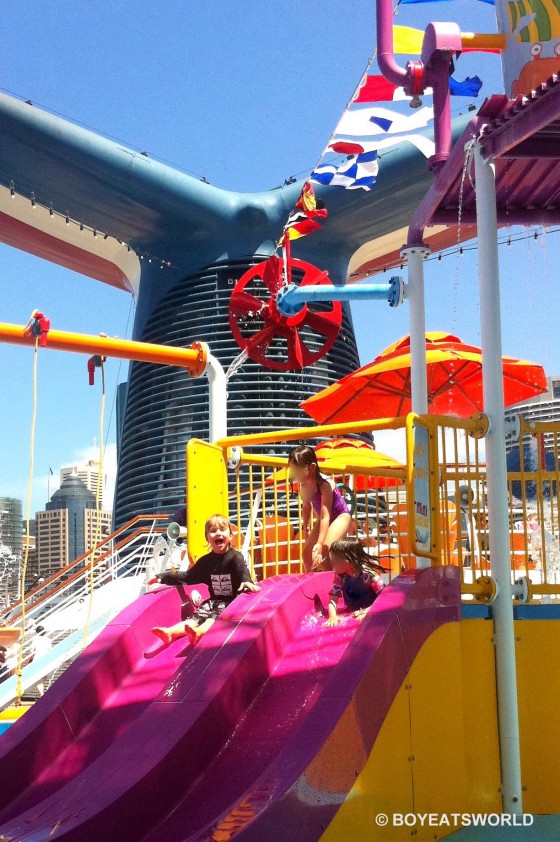 You see, Carnival Spirit also boasts two twisty turny (and that was just my stomach after riding them) water slides including Green Thunder, the steepest and fastest water slide at sea.

While the kids are too small to take on Carnival Spirit’s star attraction (height restrictions apply on both slides), it’s up to me to take on the three seconds of heart pumping pant-soiling wow! The free falling, 65 km/h slide snakes out and over the side of the ship, yes over!

Having already shouted something that sounded eerily similar to ship when I first dropped into the bright green tube, by the time I’d hit the overwater bend my vocab had further deteriorated and the words pouring from my potty mouth rhymed more with luck, which incidentally is something I thought I’d run out of as my life flashed before my eyes in the slippery green tube of hell. 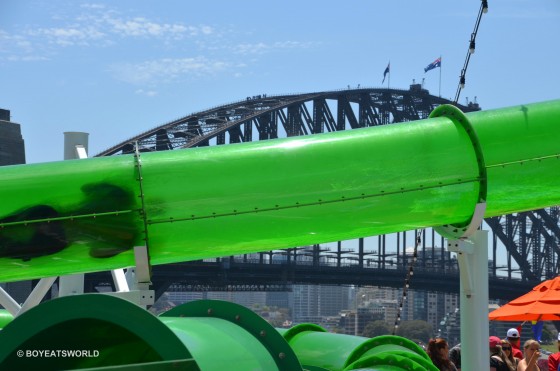 By the time I’d reached the bottom the slide wasn’t the only thing rocking a vivid shade of green. But  it only took me about three seconds to decide to head back for another twisty turn. Which would also give me time to work our how to explain the new words my children had just learned from their foul mouthed parent.

All this and we hadn’t even set sail yet! When we did finally bid adieu to Sydney to the hooting of horns and the hollering of happy passengers we decided a change of pace was in order. 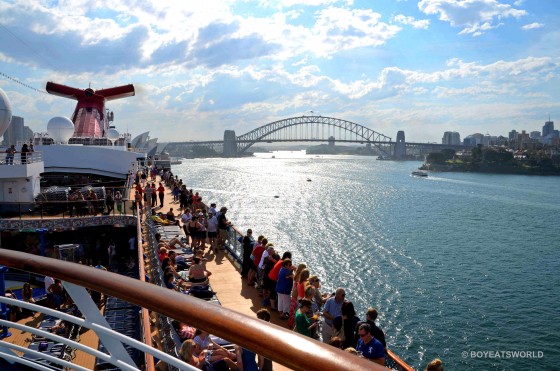 After all that action, and given that I was still a little wobbly from all that slip sliding stuff, it was time to seek out a little of that zen they’d been talking about  and Camp Carnival (the ship’s kids club for two to fives) came to our rescue, spiriting away our children for some pre-school friendly fun.

We seize  the rare moment of childlessness and head for the Serenity deck. 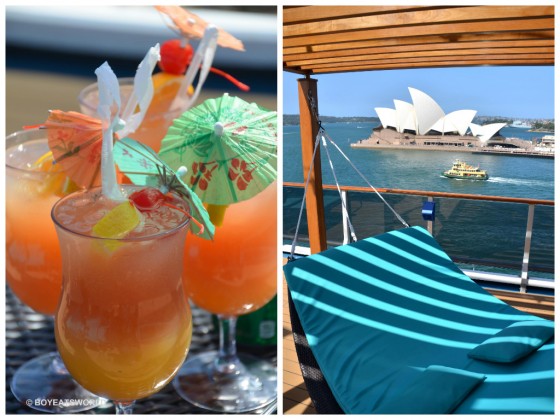 The open-air, child-free space gives parents (and non-parents) the opportunity to soak up the sun and cocktails from a day bed and enjoy 270-degree views of wherever they happen to be.

17 Comments on Cruising with kids on Carnival Spirit