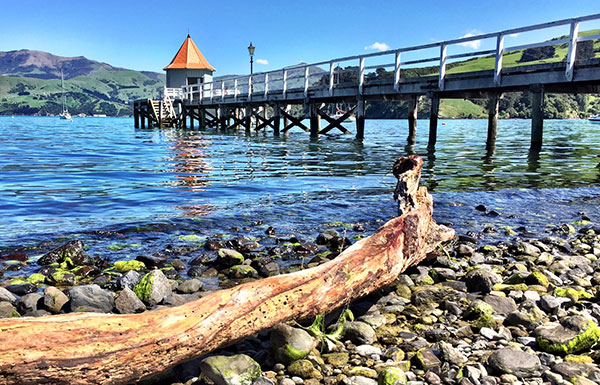 There is a mysterious vortex just south of Christchurch on the Banks Peninsular. Either that or our driver has taken a wrong route…  by about 18,000 kilometres, because somehow, we appear to have pulled up in France.

Not that I’m complaining. I’m a Francophile from way back and am quite happy to find myself strolling down the Rue Lavaud, munching on a croissant I nabbed from L’Escargot Rouge in ridiculously pretty Akaroa, a picture-book town that is so overtly French, it’s hard to reconcile that it is only 75 kilometres from Christchurch, a city that is more “British than Britain”.

So how did a little town, built alongside a deep, sheltered harbour in the eroded crater of an extinct volcano in the South of the Island of New Zealand, get so French?

Whales. You see, in the early 19th century, Akaroa was a provisioning port for the many whaling ships that operated off the island until, in 1838, French whale boat Captain Jean François Langlois decided that Akaroa seemed like a tres jolie place to set up a French colony and in a rather dubious deal persuaded the local Māori people to sell him the entire peninsula for a couple of bucks. 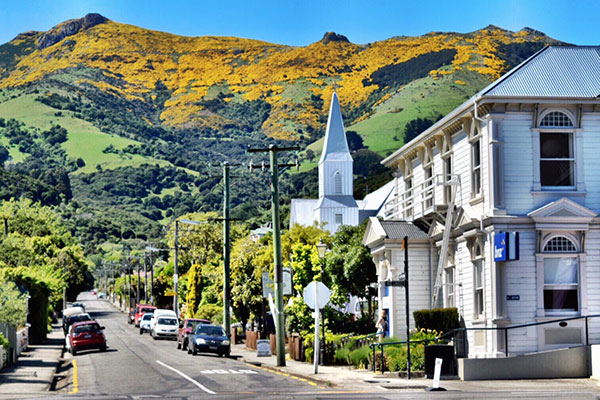 He returned to France to make it happen and sailed back with 53 colonists in 1840, only to find the English had claimed the entire South Island of New Zealand as a British colony under the Treaty of Waitangi three months earlier, and the Union Jack had been raised at Akaroa’s Green’s Point six days earlier. Merde!

But in an unsual plot twist, rather than waving them au revoir, the British granted the French colonists the right to stay and they formed a French enclave on the Banks Peninsula.

Today there are plenty of things to do in Akaroa with a French flavour as it’s picturesque foreshore is lined with timeless cafés, restaurants, galleries and boutiques, many run by the descendants of the first settlers.

The French flag waves proudly and the streets all bear French names like Rue Jolie and the aforementioned Rue Lavaud, where I leap head first into a little butchery, where amongst the local salmon and manuka honey smoked hams are an array of European charcuterie, French-style terrines, pâtés, and confits and shelves of crusty baguettes.

I immediately order up a loaf of the crusty bread, a jar of pork rillettes and a little pate because je suis un glouton. 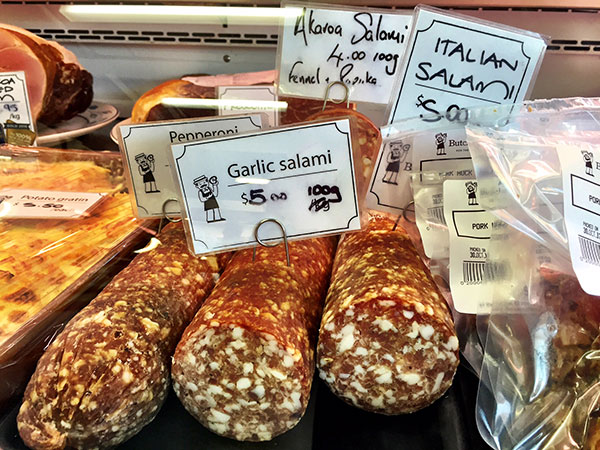 I pack up my little paper bagful of French delights and head straight to the waterfront, passing a cute kids playground and wisteria clad gardens to a pretty jetty.

I sit amongst a gaggle of cranky seagulls to scoff my Gallic goodies and soak up the views of the blue harbour, framed by the lush green and gold of the Peninsula’s bluffs. 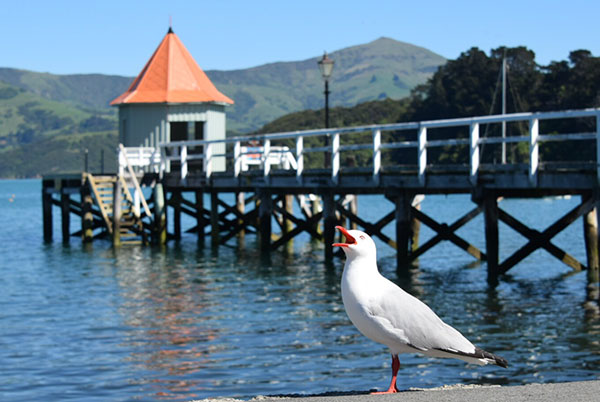 It is so blindingly beautiful, even the driftwood is pretty. 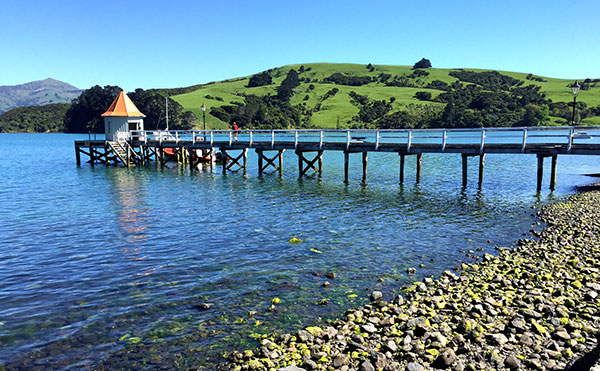 In fact, the entire town is like something out of a fairytale, utterly charming yet without a hint of contrived tourist guile. This place is the real deal.  And there’s much more to it than baguettes. 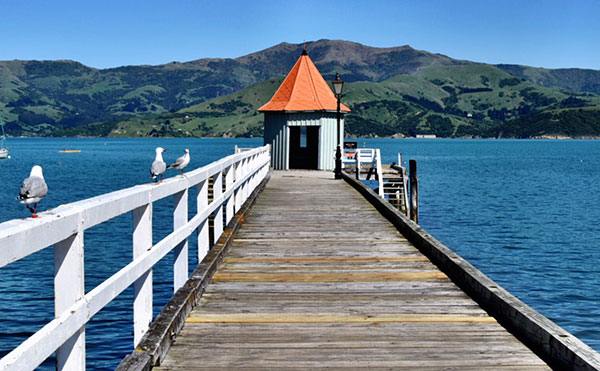 There’s a fantastic museum a that delves deeper into the area’s colourful past. And visitors can see a little of it for themselves simply by exploring the town’s streets of pretty historic buildings, some of the oldest in New Zealand. 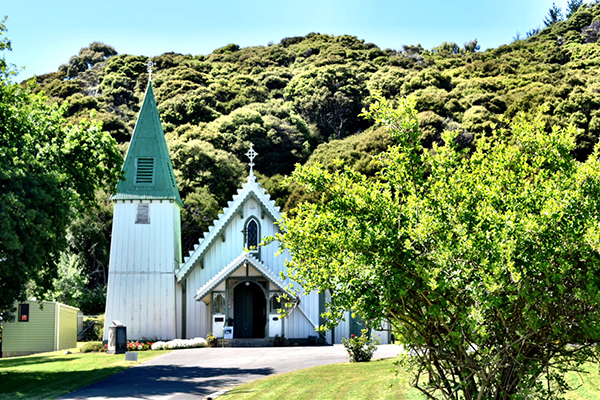 From the Old Lighthouse and whitewashed wooden churches to the Giants House, a historic home packed with original artworks, psychedelic terraced gardens with whimsical sculptures and mosaics, each is as storybook perfect as the last.

Akaroa’s beautiful bays and harbour are a marine mammal sanctuary and home to Hector’s dolphins, the world’s rarest and smallest marine dolphin.  You can head on a dolphin watching cruise, SUP, sail or sea kayak alongside your new friendly flippered friends and it’s the only place in the world where you can swim with the playful dolphins in the wild.

Penguin lovers are equally well catered for as Akaroa’s Flea Bay, along with Dunedin’s Otago Peninsula further south, is home to one of the country’s largest penguin colony, and the largest blue penguin colony on mainland New Zealand.

Adventurous types can hike around the crater rim of the extinct volcano or through Nikau Palm Gully, a pocket of forest where along with exploring the diversity of flora and fauna you can visit the top of a stunning waterfall that drops down onto an inaccessible beach.

And, if all that seems like too much hard work, you can join me kicking back with a bottle glass of local wine or the finest French bubbles in one of the many quaint cafes.  Santé!

Disclosure: Mama Eats World visited Akaroa courtesy of Emirates on the A380 Service from Sydney To Christchurch  however all croissant and baguette noshing, and opinions remain her own.

14 Comments on Things to do in Akaroa, New Zealand: Vive la difference