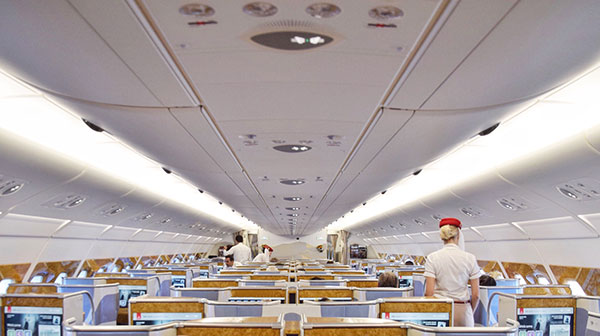 To this idiotically flight phobic frequent flyer, spending a minute on an aircraft is not dissimilar to spending several centuries in the seventh circle of hell. In fact, you’ll usually find me pole vaulting over my fellow passengers on landing in my desperation to escape.

So imagine my surprise when for the first time in literally hundreds and hundreds of flights, I actually wanted my flight on Emirates A380 Business class from Sydney to Christchurch to be longer than its speedy three hours and five minutes.

Ok, so the fact that I was flying business class may have had something to do with that, and the pre-flight Moët & Chandon most definitely did. 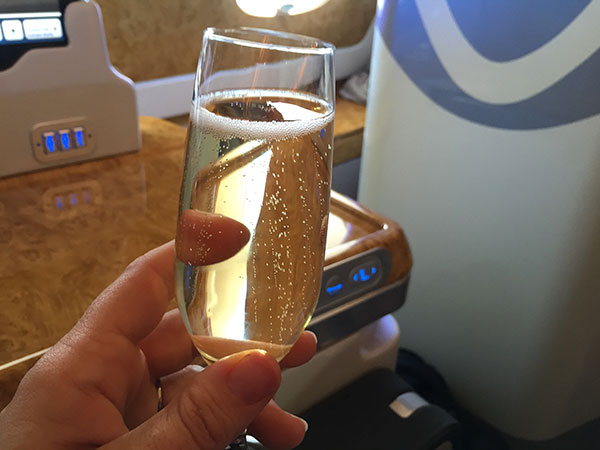 But seriously, the entire experience from the impossibly smooth and quiet take-off to landing was so sublime it may have ruined me for flying.

I mean, this wasn’t my first time in Business Class, but it was certainly the best, every element of the service just that extra bit special.

In a word sublime. The elegant wood paneled seats are suite-like and the cabin is laid out in a 1-2-1 configuration, my single window seat offering me a little extra privacy. The centre row is better for couples, parents travelling with kids, or anyone lucky enough to score a seat next to a Chris Hemsworth lookalike (or for that matter an actual Hemsworth), but come with an electronic privacy screen if you’re not. 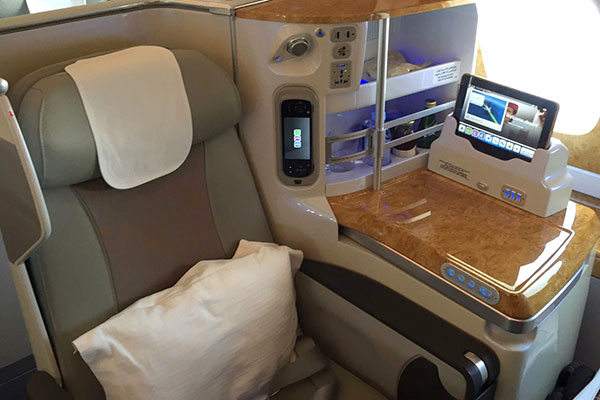 There is loads of storage, an intuitive fully-reclining seat and Emirates ‘ICE’ inflight entertainment system with a whopping 17-inch touchscreen, hand controls, a detachable tablet and comfy noise cancelling headphones.  As for what to watch, there are thousands of movies, television shows and audio programmes to choose from, plus 20MB of free Wi-Fi to use within the first two hours of log in.

While I took the chance to shut down from the outside world and kept myself happily entertained playing with my seat buttons, swilling champers and watching movies not featuring animated talking animals, there was an option to purchase further data at a fairly reasonable rate.

Meals are served on white linen with crisp napkins and gleaming cutlery and come with a tasty appetiser, a choice of three main courses (at dinner) and four desserts. I choose a beautifully cooked salmon and a luscious lemon tart, and am more than happy with my selection. 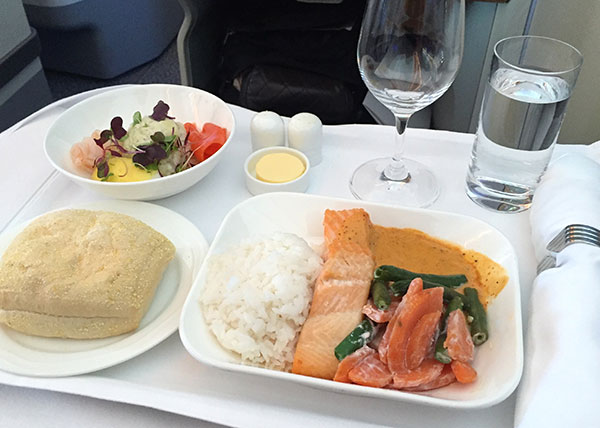 There’s a separate wine list offering a curated selection of red and white wines along with tasting notes and suggested pairings, which I ignore because I’m digging the Moët too much. A perfect pair of hand-made chocolates complete the meal experience.

After the dinner service, I head off to explore, though get only as far as the glam cocktail bar and lounge, exclusive to Business and First Class passengers where there are platters of salmon bagels, elegant wee sandwiches, nuts, fresh fruit and pretty cakes. 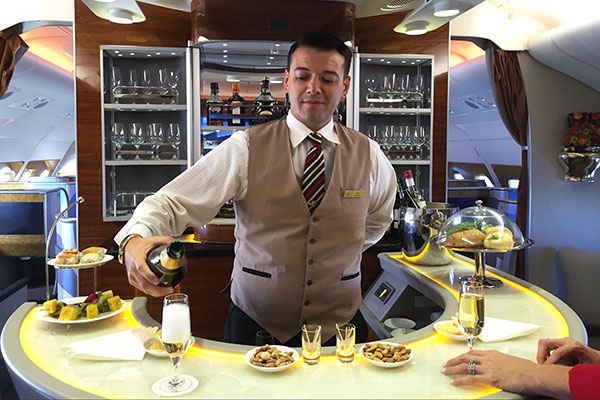 Not to mention a particularly talented attendant whipping up mojitos and a wicked martini that leaves me stirred but not shaken.

As has the entire flight.  Seriously Emirates, how can I possibly fly again without the promise of meals served on the crispest white linens and reclining seat that’s comfier than my own bed, free-flowing champagne and a cocktail waiter at 40,000 whipping up perfect martinis like nobody’s business?

Emirates A380-800 business class with kids

The mere mention of flying with kids, makes some people break out in hives but talk about kids flying in the hallowed halls of business class, and they tend to spontaneously burst into harrowing tales of how a baby cried for hours and a toddler ran down the aisle a million times, ruining the flight (Note: none times out of ten, hours means five minutes and a million times means once. But the anti-kid flying brigade do love to indulge in a little exaggeration).

But I’m fortunate enough to have flown business class enough times to have my own tales. None of which include noisy or disruptive kids. Like being stuck next to a gropy, drunken loud mouth who didn’t understand the meaning of personal space, a dude who stuck his festering sockless feet up in my window space, regardless of the whopping amount of personal space he had to put them, and Screamy McScreamford, a drama queen who insisted on shouting at the hostess throughout the entire flight because she preferred Veuve to Moet and didn’t feel like chicken, beef or a vegetarian dish. Seriously, why couldn’t they just whip her up a simple pasta?

Give me a crying kid any day.

In my, admittedly biased opinion, if you can afford it, flying business class is a far better option for families because it can take all the strain out of a long-haul flight for adults and kids alike. Especially if it is on the Emirates A380. While I flew solo this time, I did check out all the facilities for kids and chatted at length to the flight staff about what’s on offer. And there is loads.

Not only is there loads more room for fidgety little bodies to fling themselves about, there’s a big comfy seat that turns into a flatbed where they can sleep easily, enough space that they couldn’t kick the seat in front even if they tried, and more snacks and drinks that you can poke a hungry kid at. Then there is the fantastic wide-screen entertainment system with a wide variety of children’s programming including all the best stuff from the Disney, Cartoon Network, CBeebies and Nickelodeon channels, games, and  headphones specially designed for little heads. 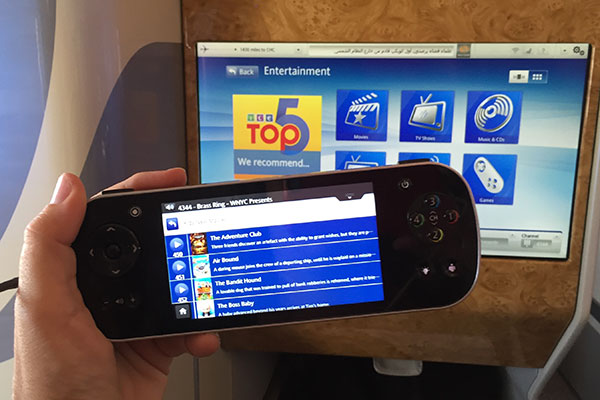 The kids will be engrossed for so many hours that you can just sit back, sip on your Moet and tune into something that doesn’t involve talking animals or superheroes. Oh, and on the off chance they do get a little noisy, like you all the adults around you will be rocking a set of lovely noise cancelling headphones, so they won’t hear a thing.

But the benefits for kids on Emirates doesn’t end at its awesome kids’ entertainment programming. The airline quite literally spoils their youngest passengers rotten. In its home port of Dubai, there is a dedicated family check-in area, but priority boarding is offered for families across airports worldwide.  Then there are the exclusive Fly With Me toys and fun packs with different items available both in flight and in Emirates lounges.

On board, pre-school kids will love the range of cute animal characters. On our Emirates A380 business class flight from Sydney to Christchurch, we were offered a Fly with Me Cuddle Buddy, a cute cuddly character stuffed with a toddler-sized blanket, which made for an awesome travel companion for the flight and beyond. 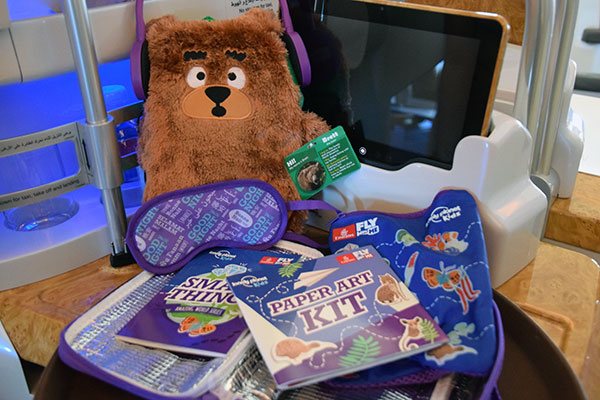 There’s an activity magazine and colouring set for Emirates’ passengers aged between three and eight. And for bigger kids, the airline has teamed up with the experts at Lonely Planet Kids to offer packs for older children with specially designed retro-style backpacks and lunch bags, each featuring exclusive fold-out world maps, travel journals, fact cards, educational books and more to encourage a sense of adventure and learning.

And really, that’s what travel is all about.

15 Comments on Emirates A380 Business class from Sydney to Christchurch