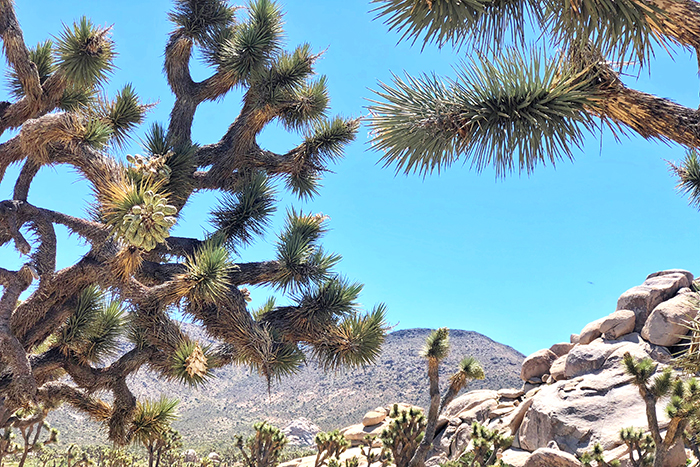 The sleepy town of Joshua Tree is just a short distance east of Palm Springs, but the difference between the two is startling.  Modernist architecture is supplanted with huge weather-smoothed boulders and in place of the beautiful people Palm Springs is renowned for, you’ll find … well, a bunch of resident pricks. Of the cacti kind.

Of course, you’ll also find Joshua Tree’s Joshua Trees. You know, the ones so oddly shaped and gnarly that they look like they were illustrated into the desert by Dr Seuss. 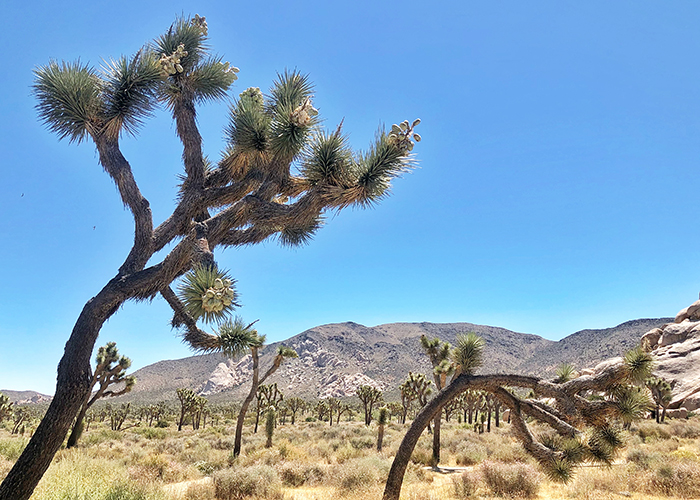 Oh, and when I say desert, I don’t mean to conjure visions of Lawrence of Arabia and camel studded masses of sand. It’s not like that. Instead this lyrical landscape is a place of rolling hills scattered with colourful flowers, palm tree oases, kooky cacti, piles of scattered boulders secreting hidden caves, a stack of those implausibly fabulous trees, and epic vistas of mesas, mountains and valleys. 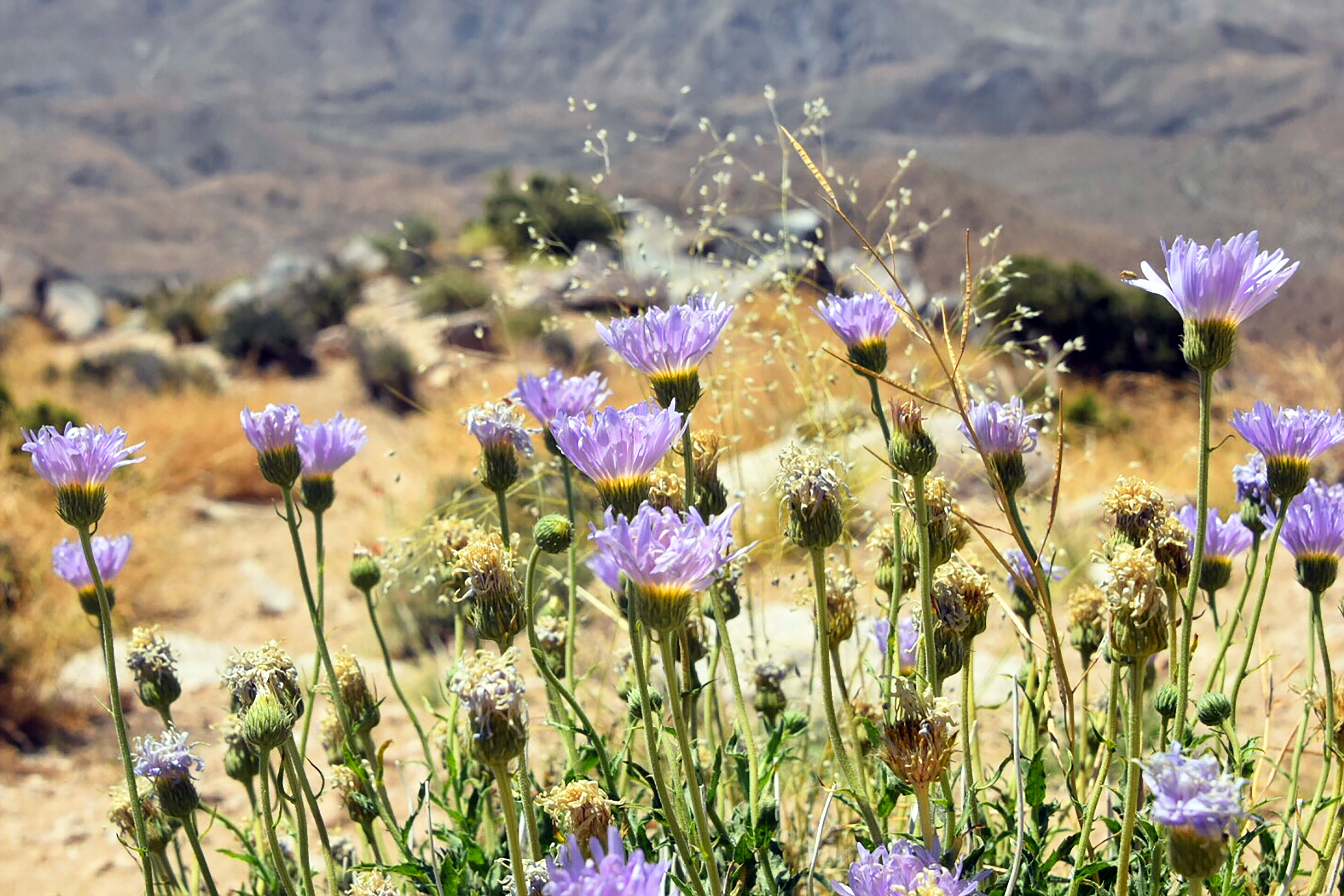 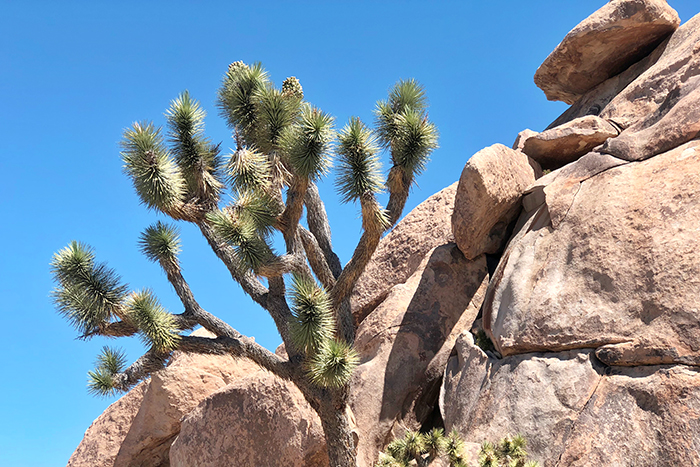 These resilient trees can take up to 60 years to mature, live for as long as 500 years and are a unique part of the ecosystem of the Mojave Desert, the only place they’re found, where they provide a home to a number of native birds, mammals, insects, and lizards.

That is if they’re not chopped down by feckless morons, which was a sad reality earlier in 2019 during the Federal Government shutdown. 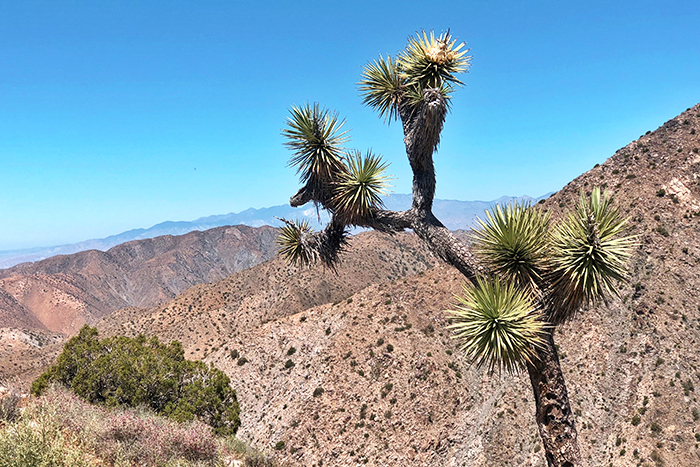 Joshua Tree and U2

Joshua Tree National Park is a place so weirdly wondrous that it has inspires art, music and many a myths. Its gnarly namesake trees were made famous as the (back) cover girl of the U2 Album of the same name, though the super star Joshua Tree known and loved by fans wasn’t actually from Joshua Tree, instead it was snapped some 300 kilometres away at Zabriskie Point in Death Valley National Park in Inyo County. But that’s just semantics, right?

And while the album remains a musical icon, these days the tree is more of a stump with a couple of busted up guitars and a plaque asking, “Have you found what you’re looking for?” Die-hard U2 fans might be better off making the pilgrimage to the Harmony Motel, located minutes away from the headquarters of Joshua Tree National Park, where the band stayed while working on the album.

Regardless, I can’t help busting out into a few loud strains of ‘In God’s Country’ as I swagger amongst the trees.

My travel companions may also need new eardrums as Bono I am not. I can’t even rock a mullet let alone a tune. In fact, the closest I get to rock’n’roll is slipping off one of the boulders. 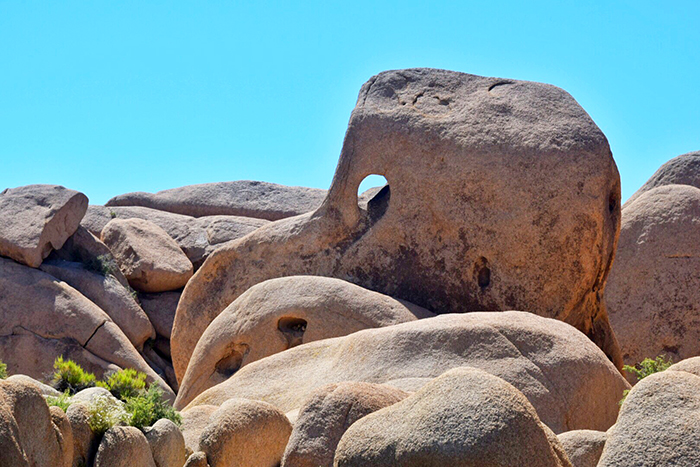 So I nix the soundtrack to quietly tip toe through the cacti, meander through oases of palms, stumble over boulders like a less graceful Desert Bighorn Sheep, check out the ominously named Skull Rock, and pause to gaze in awe over the Coachella Valley from Keys View lookout. 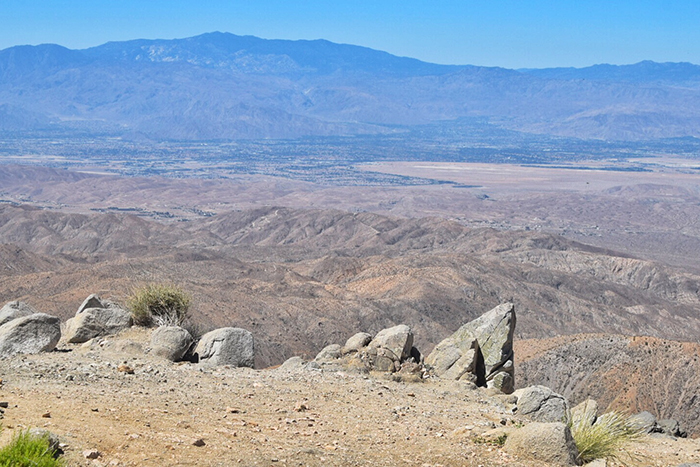 While every single Joshua Tree has its own quite magnetic personality – some standing tall, others kinked and twisted at angles like they’d been frozen in place mid musical chairs, it’s the township of Joshua Tree that has the biggest personality of all. 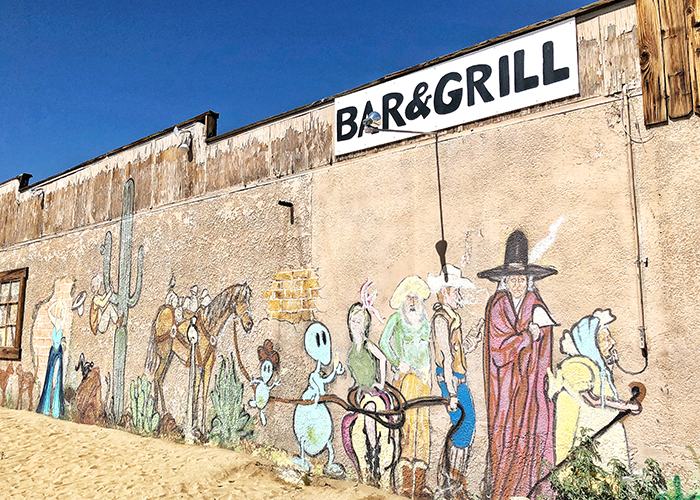 Arty, eclectic and well, just kinda weird, its loaded with quirky characters (can someone explain to me why a half-naked man was surfing on the roof of a passing car?). 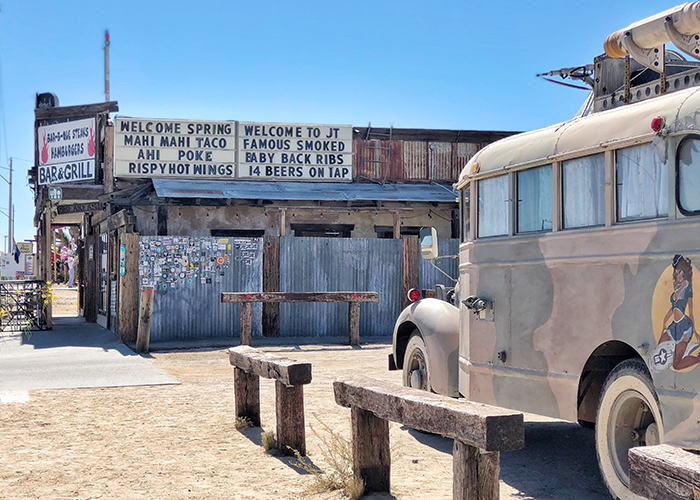 You’ll also find  galleries, funky cafes, desert charm in spades and rough and ready early openers that wouldn’t look out of place in a Tarantino flick. 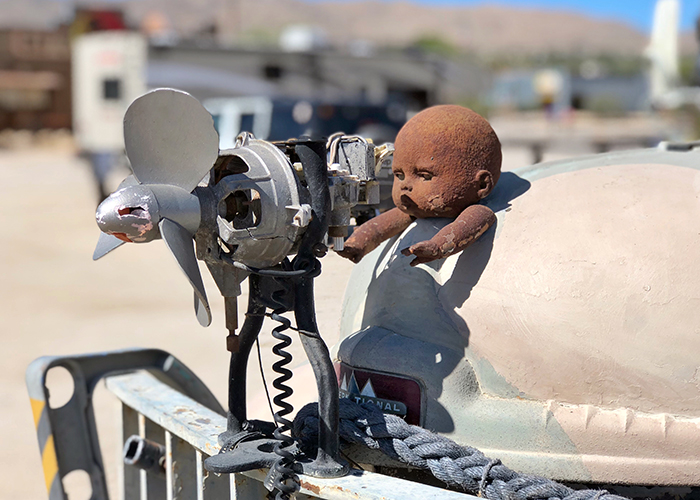 Speaking of flicks, just west of Joshua Tree, there is a tiny place called Pioneer Town that’s big on character. Created in the 1940s as an Old West movie set by actors Roy Rogers and Gene Autry, western fans may recognise it from the cinematic likes of Annie Oakley or The Cisco Kid. 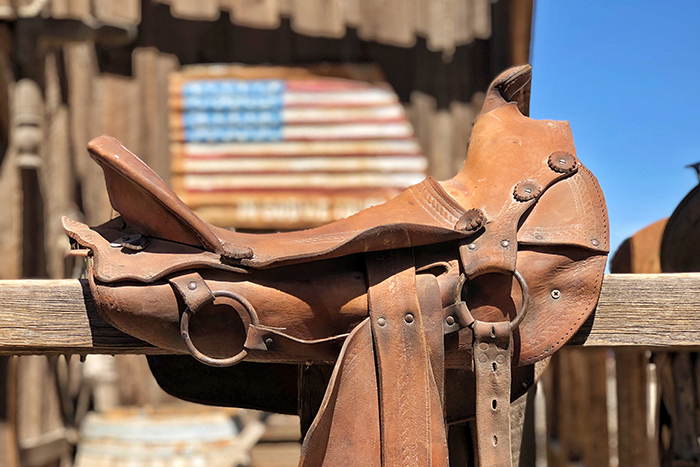 These days, other than the odd campy gunfight that breaks out in front of its faux-frontier buildings, the town is less wild west and more a quirky community of artists, eccentrics and retirees. 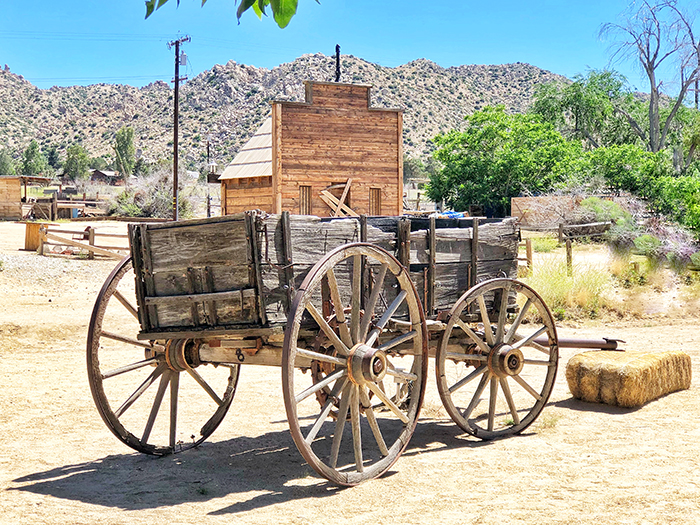 And those faux Old West cottages that were built with movies in mind are now small boutiques and stores that are being operated and lived in by real people. 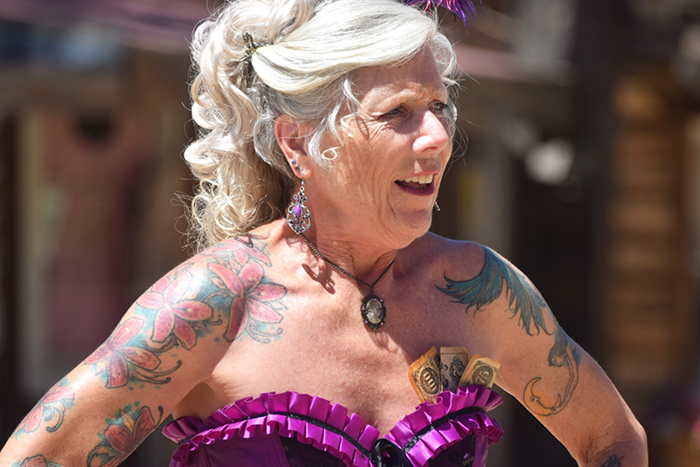 Pioneer Town is also home to the one of the world’s most remote and legendary music venues, the rocking Pappy and Harriet’s Pioneer Town Tavern. 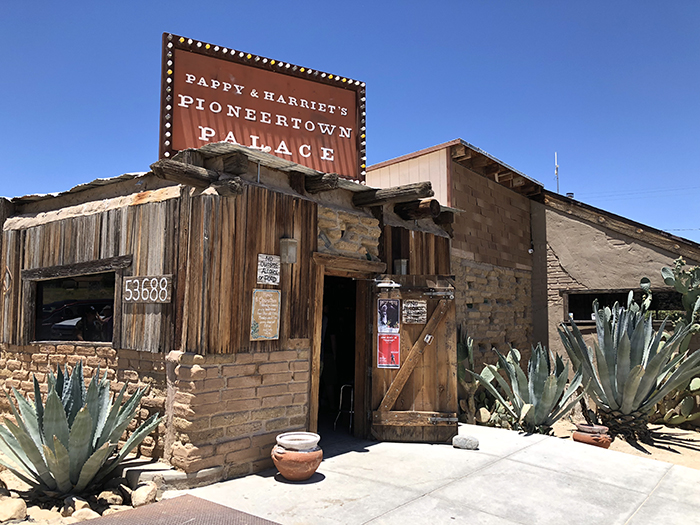 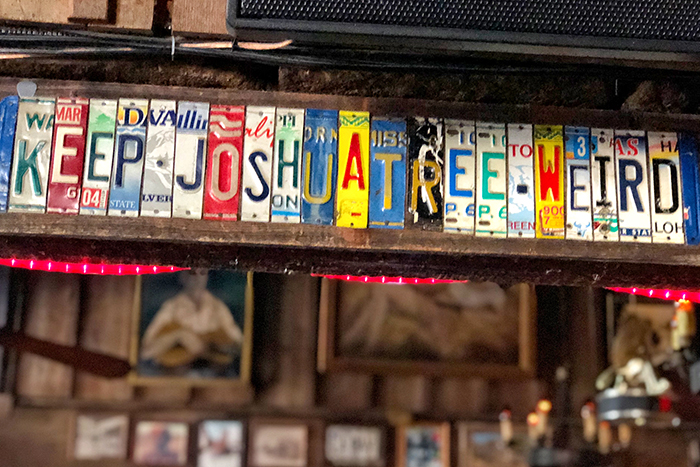 A sky full of stars

If you want to see real stars, grab yourself a blanky and head to Twentynine Palms and ​Sky’s the Limit Observatory And Nature Center in Joshua Tree National Park after dark where you will see a sky full of them. An officially designated International Dark Sky location, the otherworldly Joshua Tree National Park proves the perfect place to spy … other worlds … and more stars than you can poke a cactus at. 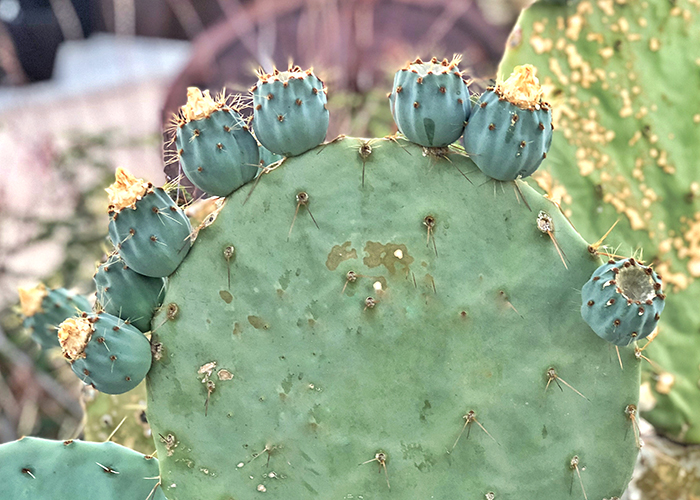 Getting there: Joshua Tree is a one hour drive from Palm Springs. Drop by the visitor centre for a quick lesson in local flora and geology and to map out the the best sighting route for your family and time. For the ultimate Joshua Tree experience we recommend pitching a tent to sleep under that legendary desert sky.