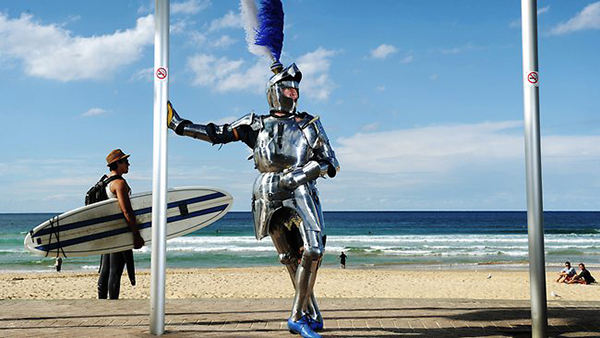 You probably don’t realise the lengths Raffles is prepared to go to in order to find interesting people to interview for this blog! In this case, as the world’s best jousters prepare to converge on St Ives for Australia’s largest ever international jousting festival, he desperately wanted to chat with Sir Andrew McKinnon, the man behind the extraordinary St Ives Medieval Faire.

In fact, so keen was he to get the inside story on all things jousting that he battled the armoured knight with a plastic sword until he spilled the medieval beans… read on! 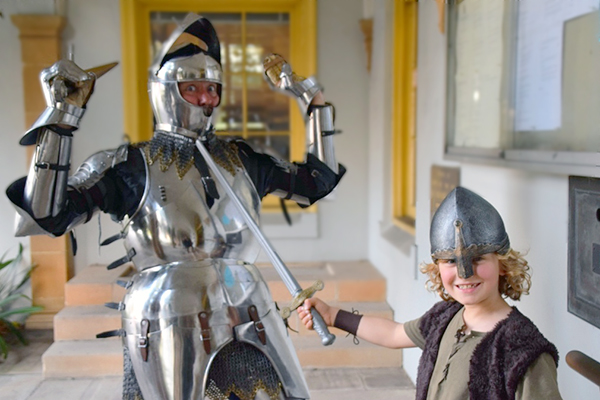 I love knights and Vikings so I loved everything about last year’s inaugural St Ives Medieval Faire. And it wasn’t just for grown ups, there were loads and loads of things for kids too. I tried archery and watched people catapulting giant watermelons with the trebuchet and got to hold a massive wedge-tailed eagle that wore a hat. 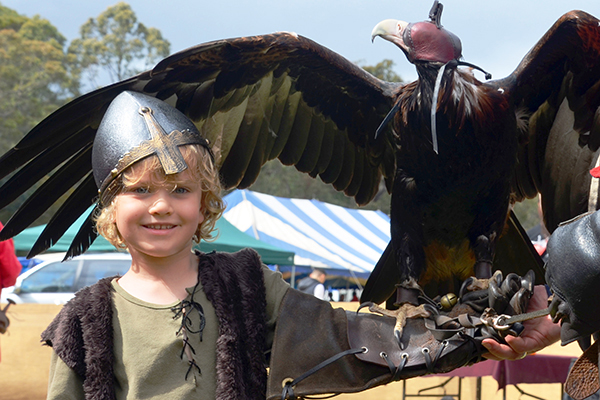 I even met a jester who taught me how to ride a unicycle and juggle. 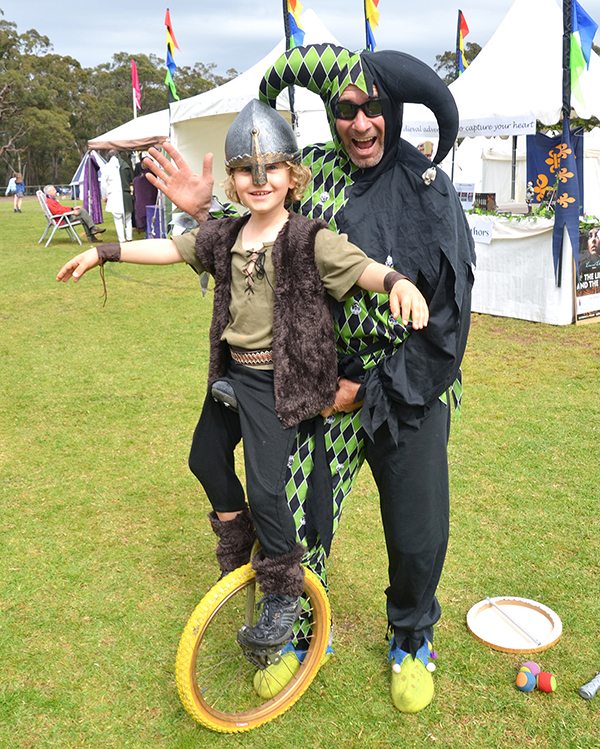 What will there be for kids at this year’s St Ives Medieval Faire (on 19th & 20th September) that could possibly top all that?
Just like last year we’ll be making medieval history fun, so there will be plenty on for the kids (and big kids) too! If you’ve dreamed of becoming a warrior, you should head along to the Knight’s Academy, where you can learn the basics of gallantry, chivalry, honesty and honour through fun activities like swordsmanship and mock combat. There are puppet shows, comedy shows, archery, an awesome birds of prey demonstration and so much more! For younger kids there will be a medieval story tent where you can hear stories of medieval times and create your own medieval arts and crafts, plus pony rides and dress-ups.
Ok, sounds even more awesome! 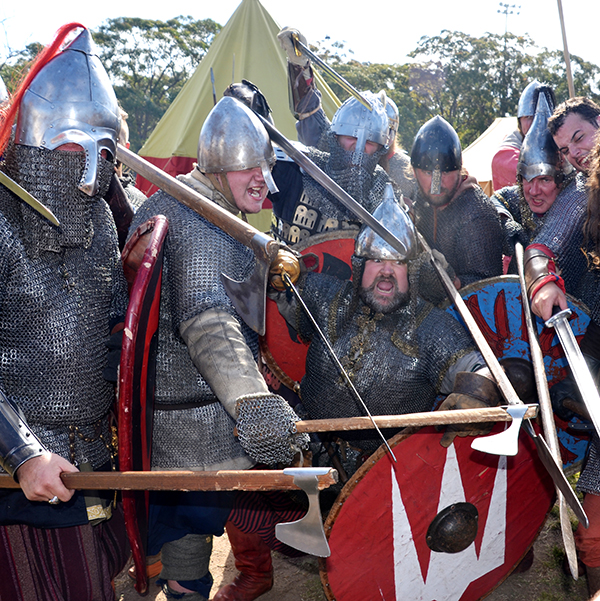 I also loved watching all the Viking biffo last year. Will there be battles again this year?
Yes, there will four battles staged each day and they will be massive!
EPIC!

I like to eat. A lot. I know this year you’re going to hold a humongous feast night and it made me wonder, what did medieval people actually eat?
This year we are having a special feast with yummy medieval goodies. The medieval period actually covers a few hundred years and encompasses most of Western Europe as we like to portray it. Peasants ate a basic but healthy diet with lots of vegetables and a little meat. Nobility tended to eat more meat and elaborate dishes. Some of the more unusual dishes included swan and even dolphin!
Ewww. I’d eat pretty much anything but I think I’d have to pass on eating a dolphin, they’re way too nice to chomp on. 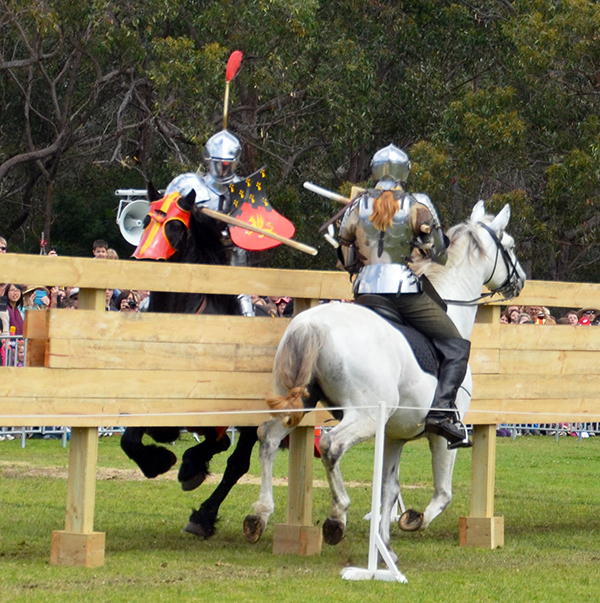 You’re a knight and you’re competing in the Tournament of St Ives, a jousting competition, which is completely awesome! I watched it last year at the fair and thought jousting was totally epic but you guys SMASH each other with your lances. Is it scary?
It’s not scary as we’re very highly trained to be able to do this. It requires us to be very brave, and we need to look after our horse friends, who make it possible.

Does it take a long time to learn to joust?
It does take a long time.  First, you need to learn how to ride really well so that you will be able to ride in the metal armour (which is really heavy!).  It also takes a lot of skill to be able to ride a horse while holding the lance.  In all it takes a few years of hard training before you can joust!
So I better get started now then…

You’ve travelled the world to compete in jousting tournaments, where’s the coolest place you’ve competed?
St Ives! Though France was a close second as they had real castles.
I love France too, the castles there are totally awesome.

Which place in the world do you think has the best food for medieval knights to eat after a joust!
You always get the best food at home.
That depends on who is doing the cooking! Like when my mum cooks it’s awesome but dad always seems to get stuck on sausages.

I find it really hard to even fold my t-shirts to put in a suitcase. How on earth do you pack armour to travel?
The armour weighs up to 40kg so it is a really expensive part of jousting.  In fact, it’s actually more expensive to bring the armour than it is for the airfare! The armour fits in my suitcase – and leaves no room for anything else!

And what about your weapons? And your horse? How do you pack them?
Due to safety and quarantine requirements I leave my trusty steed and weapons at home. These are provided by our generous overseas hosts.
Phew. I wondered how you’d fold a horse! 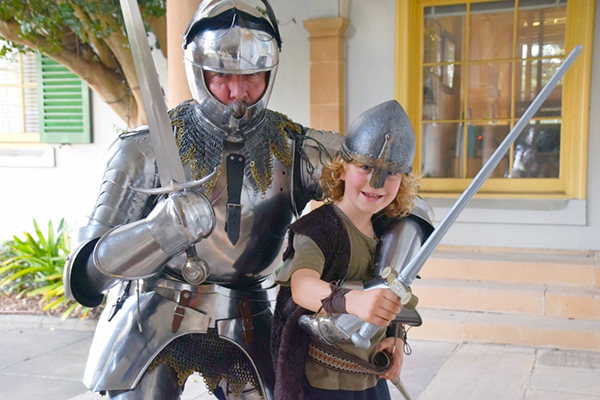 If you’d like to WIN one of two family passes to this year’s St Ives Medieval Faire (each valued at $89) simply tell us your idea of the ultimate feast night!

Disclosure: This is not a sponsored post. We enjoyed last years St Ives Medieval Faire so much that we wanted give y’all the chance to step back in time!