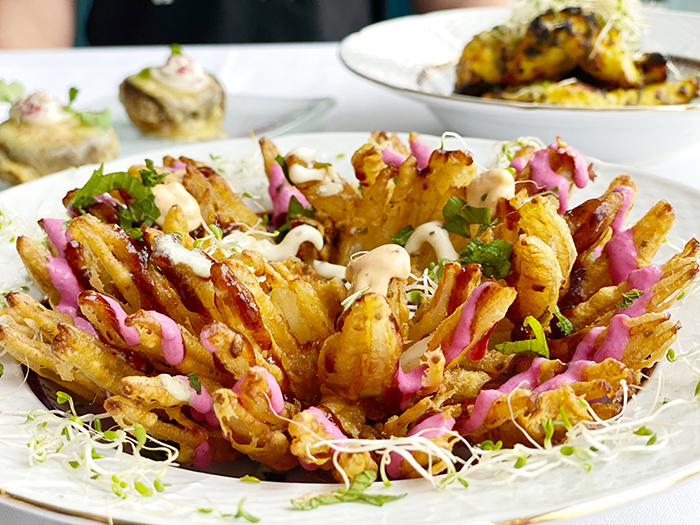 With a little assistance from mum, I worked my way through a staggering five entrees, three main courses, a blanket-size naan bread and two deserts. And while I had to waddle home for a good lay down afterwards, I don’t regret a single bite. 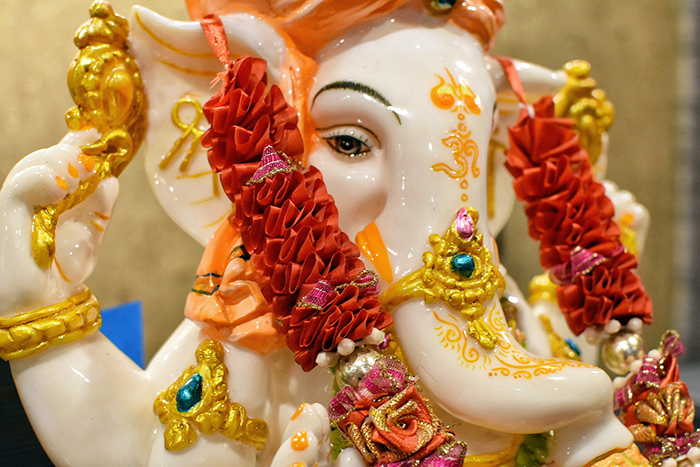 But before I start on the menu, because that’s going to take me a while, I want to talk about the service. Being a kid almost automatically means that I will be completely ignored in restaurants. And look, I get it, the adults are in charge and paying and deserve respect. But that doesn’t mean their kids don’t exist.

But not at Manjits. They treated me as a welcome guest, just like they did my mum. They didn’t assume that just because I am a kid I would just want steamed rice and dessert. Or that I would be scared of spice and they just really, really looked after me. 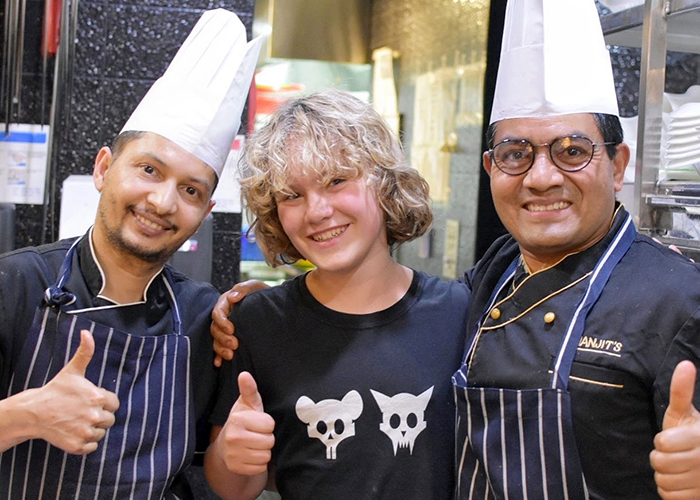 And that made my mum happy too. Because when it comes to eating, she says we’re equals (although not in appetite, I could out eat her any day of the week).

Anyway, on to the food. With an enormous menu that borrows from the finest Indian street food to sophisticated food of royalty, we started our Manjits Wharf journey with gol gol goppa, a crispy sphere filled with chickpea and potato and topped with a shot glass full of fiery tamarind and chaat marsala water. Into my gob it went then BAM comes layer after layer of flavour and heat and spice. The burn is so brilliant I asked for seconds. 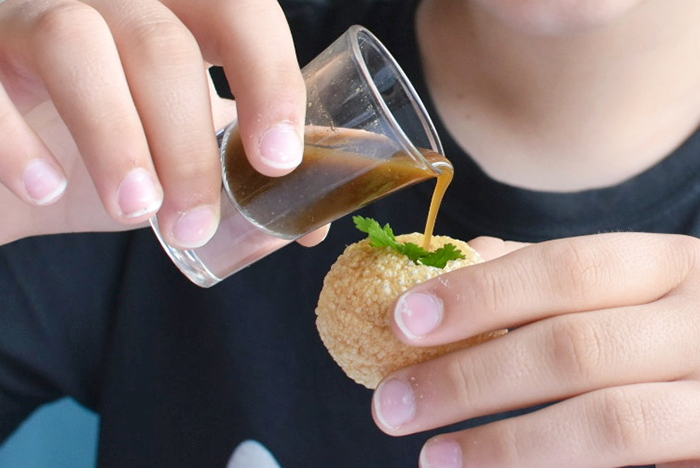 This was a rookie mistake as I didn’t know just how much more food was going to be coming my way and I should have paced myself.

Kabhi khushi kabhi khumb was up next. It’s a dish of little organic mushrooms filled with paneer and cottage cheese, spiced corn and water chestnuts and was just yum.

Then came pyaaj ka phool. The world’s prettiest onion bhaji, its fried, chickpea flour-coated layers unfurled like a lotus flower and tasted amazing. It was so good that I would have been happy if it was the only thing served. I’m glad it wasn’t though. Kashmiri chicken was next. It’s a dish that is mildly spiced and served on a zesty lemon and sweet pea puree, but the smoky char from the tandoor gave it a nice, earthy edge. 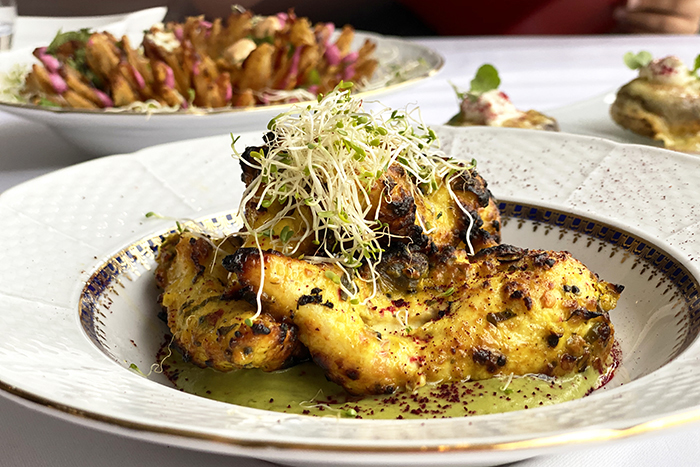 From the earth to the ocean with aTandoori fish malai, a flaky and fabulous white fish dish spiced paired with the four signature sauces of India, to represent north, south, east and west India. 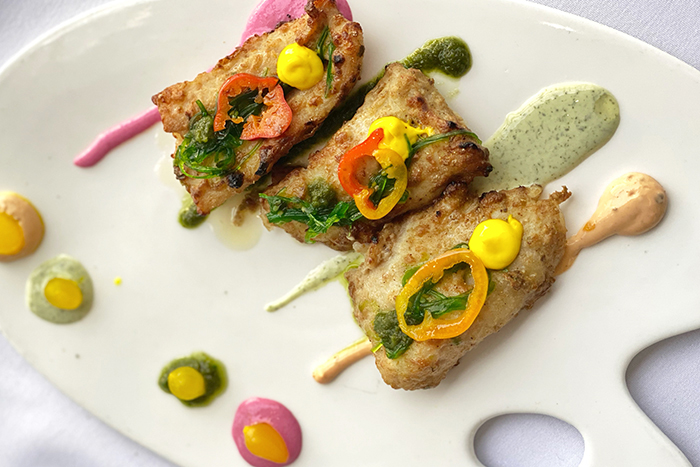 It did the job because my tastebuds flew in every direction.

I was already pretty stuffed when the most enormous naan bread I’ve ever seen materialised. It was so big I considered taking a nap between courses and using it as a blanket. 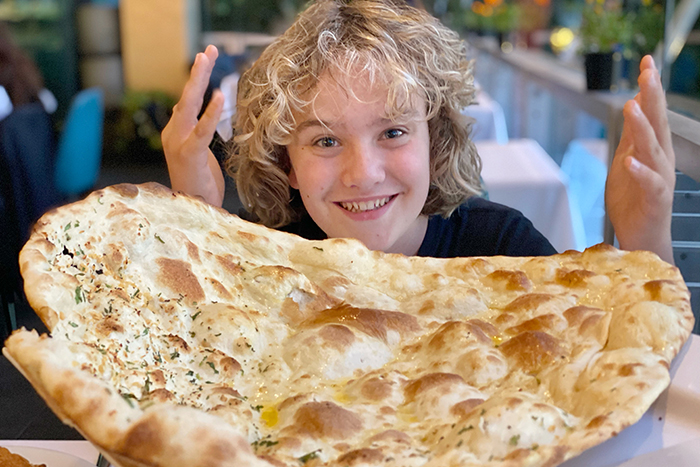 Instead they took me to the kitchen so I could try my hand at making a naan of my own over the tandoor. I did ok too, but I don’t think the chefs should be too worried about their day jobs just yet. 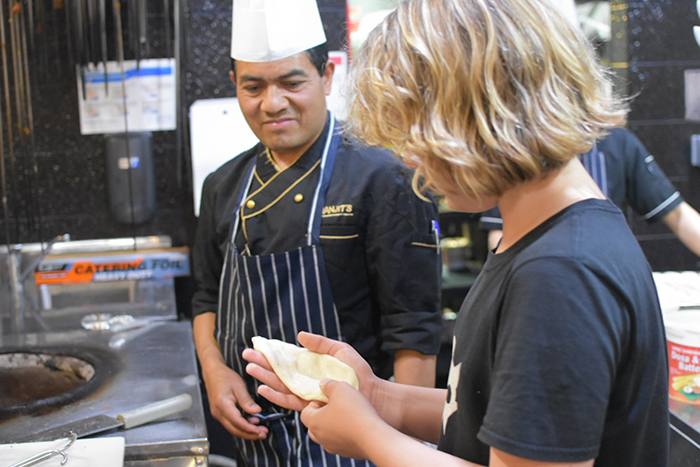 Back at our table our waiter asked if we were ready for the mains and my eyes bugged out. There was more food?

The restaurant is famous for its Butter Chicken (the dish was invented by an ancestor of the owners) so it wasn’t a big surprise when a bowl of it arrives. It was next level delicious. Creamy, spicy and succulent with layers of flavour, it was so, so much better than the too sweet, neon-orange stuff I’m used to.

Taingan Takatak was a big surprise.  This was a smoke-roasted baby eggplant mashed with onion, tomato and chilli on a traditional hotplate. 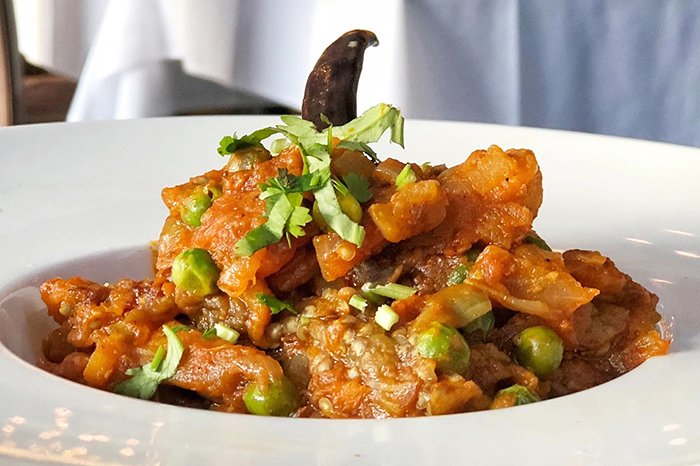 It was revealed in a puff of magical smoke at our table and, eggplant fans we are, demolished at speed. It was incredible and left flavour that lingered for ages. I have to say Manjits Wharf is very kind to vegetarians because there are a LOT of vegetarian dishes on the menu and they are some of the tastiest.

But it is the Dum Ki Biryani, which totally blew my mind. I mean when it arrived, almost like a pie with a pastry top, my first thought was, “I am literally going to explode”, but once they cut away the top to reveal the fragrant basmati rice, pressure cooked in spices with chunks of super juicy chicken, I dove in. 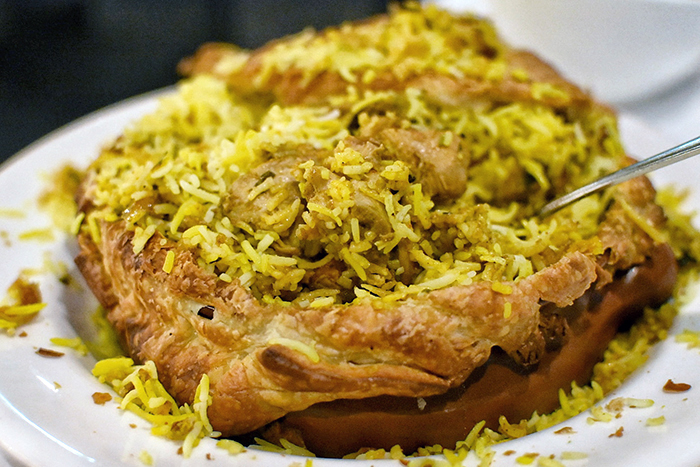 I call genius on this because it is light and fluffy and textural. It is the best biryani in Sydney. No contest.

I was close to exploding when a couple of desserts appeared, but I wasn’t prepared to let the team down. 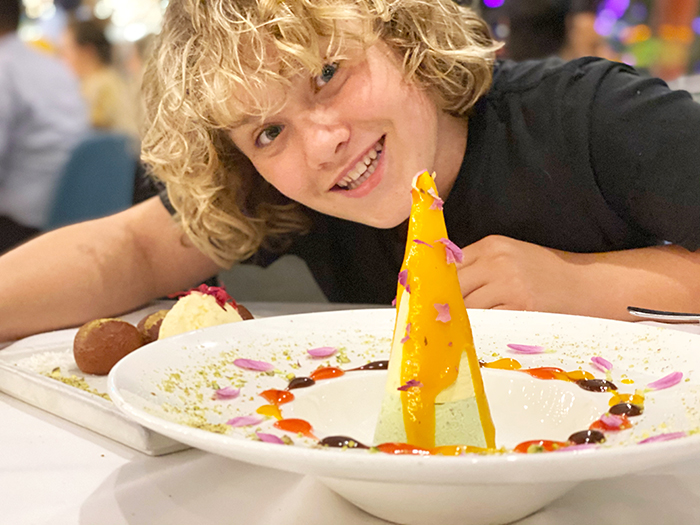 I tasted a tiny scoop of the mango Pistachio Kulfi and it was so good that I ended up gobbling the entire thing while mum noshed on a couple of amazing kaala jamun: warm Indian doughnuts soaked in syrup and cardamom. 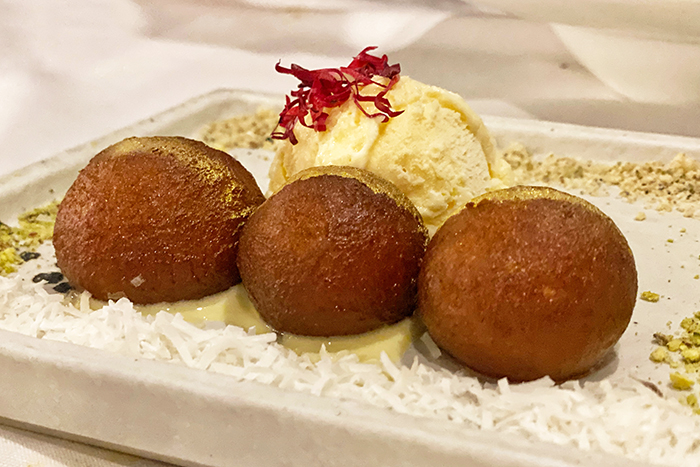 OK, so I may have stolen one of those as well, right before sinking into a food coma.

Was there really that much food? Yes. Did I eat way too much? Yes!

But this was a meal in a million. The food was epic. The service was epic. I just wish I had another stomach so I could eat it all over again.

Disclosure: Raff was a guest of Manjits Wharf and Spooning Australia but all face stuffing, feats of culinary consumption and opinions are his own.