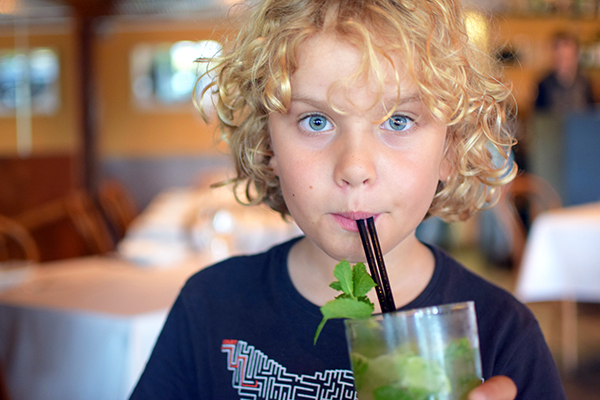 When people think of Katoomba they tend to think of the Three Sisters, awesome views, bushwalking and well, mountains that are blue. At least that’s what I thought until my most recent visit. Turns out that along with the epic views, there is also epic produce and amazing dining.

And the most amazing food of all is at Palette Dining Katoomba, a restaurant that blew me away with its super nice service and totes tasty food. When we arrived we were lucky enough to meet the owner, Petrina Kerr, who has worked all over the world as a chef and wanted to bring a la carte dining to Katoomba.

She was really nice and really kind and took the time to explain to me how she involves the community in her restaurant by using the best seasonal local produce from the area to create the freshest and most sustainable food she can. Petrina showed us her rooftop garden where she has started to grow her own veggies. 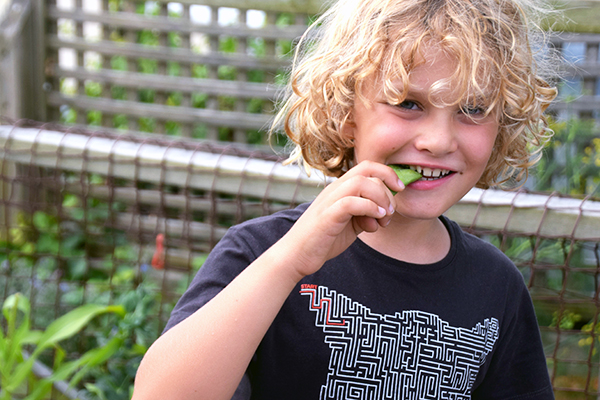 She even has a beehive where so she can provide the honey for her restaurant. 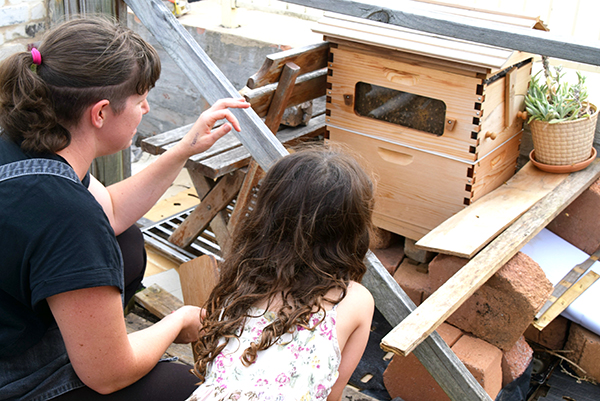 The restaurant itself is really cool. It’s in an old art deco building but the place is funky and modern. There is art all over the walls, with changing exhibitions from local artists. And kids are made feel so totally welcome.

Upstairs is a cool and colourful studio bar where the super nice sommelier, Matt, made me my first ever Mojito. 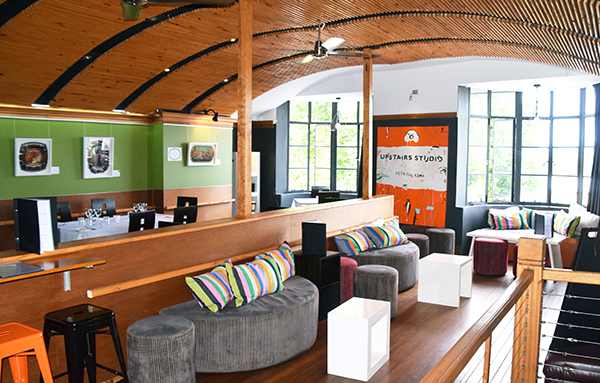 It was a thing of epic awesomeness. Because I am eight, he used apple juice in place of alcohol, but dad said it tasted better than the one’s he’d had in Cuba.

Now, let me tell you about the food. Because it was so good, I’d recommend a visit to Katoomba just to eat here.

We started with bread baked fresh in the wood fired oven and an awesome selection of entrees. Dad’s Pork Belly was sticky and delicious, with creamy bright green avocado puree and fried Jalapeños that popped when you bit into them. Mama chose melt in the mouth beef Carpaccio, which was so, so thin and covered in little edible flowers. It was so pretty it looked like a painting. 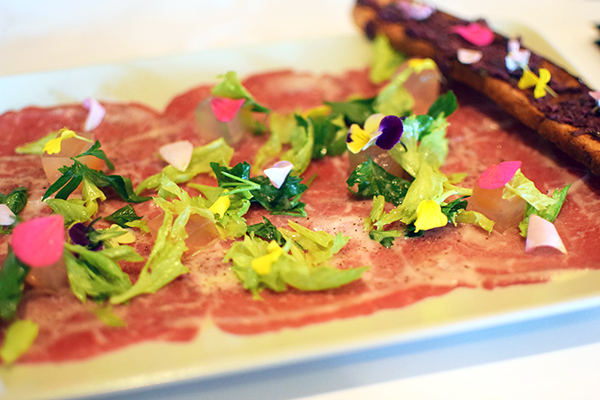 My sister, who is usually a fussy eater, devoured a plate of twice cooked chicken wings with spicy lemongrass caramel. 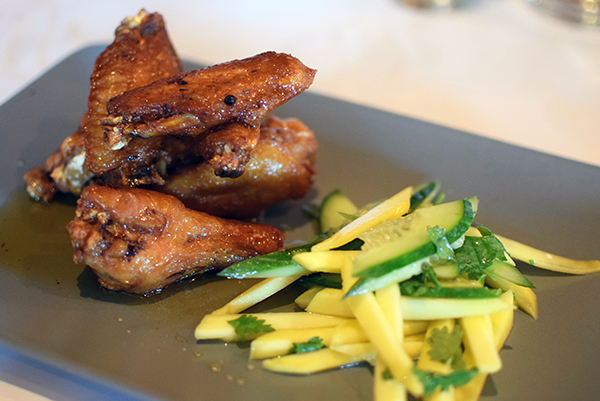 And Me? I had the grilled dukkha prawns with a salad of onions and red cabbage, which was sitting on top of the best hummus I’ve ever eaten. The salad alone would have been enough to blow my mind but the addition of the smoky prawns made it crazy good. 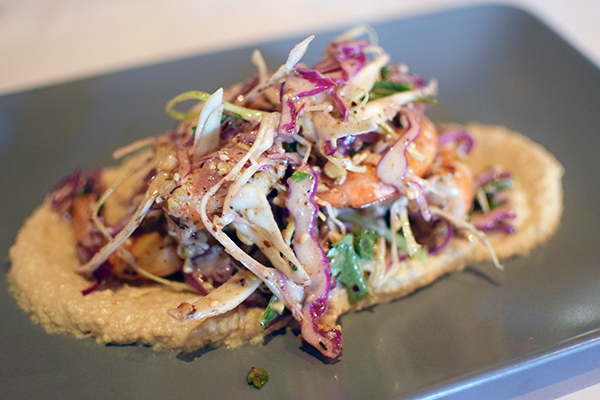 For mains, Dad had a perfect sirloin steak, which was topped with fluffy fried onion rings. My sister settled on a side of mac and cheese, which was good enough to inspire her to sing a song to it while she ate. She’s weird like that. And mum’s chicken was glazed in miso, with a glass noodle salad that rocked a bunch of tasty Asian flavours. 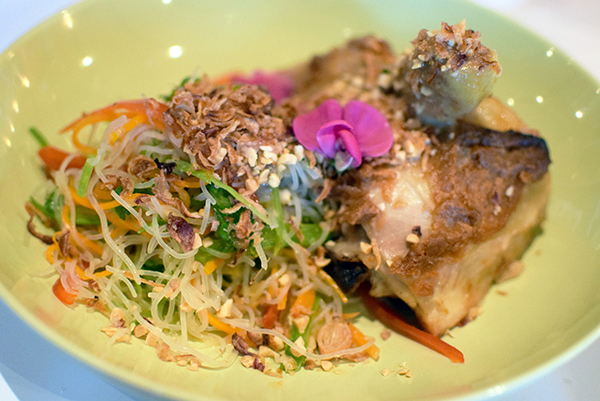 But I won Eats World Menu Roulette with my walnut crusted salmon, which was served on a bed of crispy veg with salsa verde, and was a plate of unbeatable awesomeness. 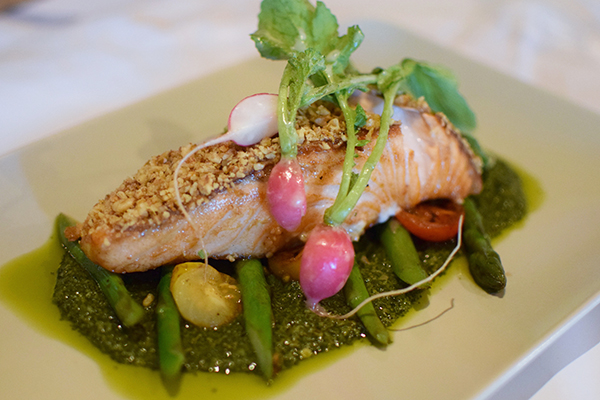 The chefs here are so good, they even managed to make a side of iceberg lettuce taste like heaven.

And the deliciousness just kept coming. For dessert we gobbled up gooey soft Italian meringue (with poached rhubarb, jelly and ginger crumbs), a warm chocolate pudding (with honeycomb) and an earthy tasting matcha panacotta with a selection of super juicy berries and peppers, which was my favourite. 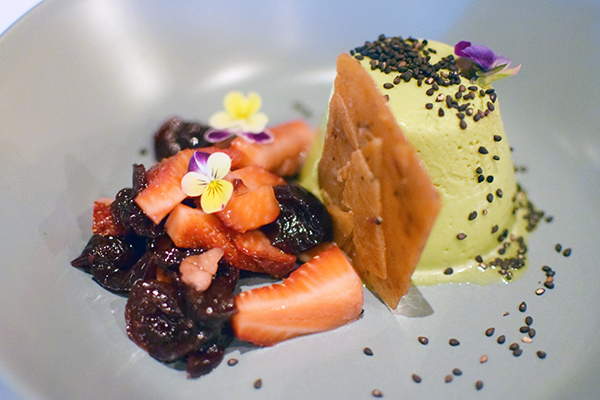 Literally my only complaint about the entire meal is that mum and dad have improved their dinner defence and managed to eat most of their own meals, and I only got to try a taste of each instead of stealing the lot like I usually do.

Disclosure: Raffles was a guest of Palette Dining, however all opinions remain his own.