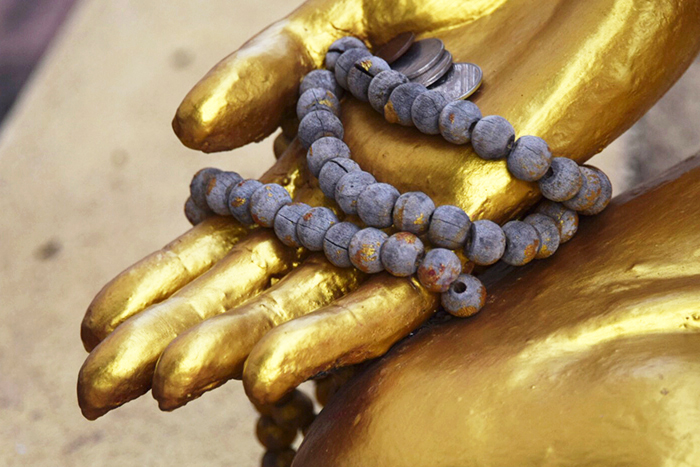 Travel doesn’t always have to be about the journey or the destination. Sometimes it’s more about the moments. Some of them are inconsequential in the grand scheme of things but others leave their mark on you forever. A pilgrimage to Nan, a province on the Laos border of North-Eastern Thailand, delivers just such a moment.

Infrequently visited by foreign tourists, the undeservingly overlooked Nan is a pretty town fringed by tranquil valleys and forested hills. An unhurried and unsullied treasure of a place crammed with elaborate and eclectic temple complexes boasting frozen forests of gold-tipped spires, splendid reclining Buddhas, many a ferocious naga (mythological serpents) and ribbons of saffron robed monks.

It is precisely these riches that have inspired my visit to the remote rural town, as my somewhat depleted spiritual well is in desperate need of filling.

My magical mystical tour has already seen me visit many of Nan’s most splendid temples. Wat Ming Muang, enshrining the city pillar, is embellished in stucco relief like an elaborate white wedding cake, and the golden confection that is Wat Sri Panton, adorned as it is with shimmering seven-headed naga, is a stand out. 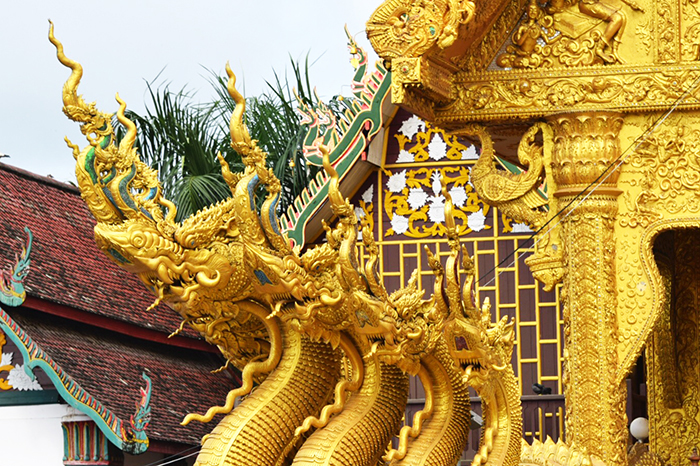 Then there’s Wat Phumin, a temple whose outward simplicity belies the treasures hidden inside. Famed for its interior walls, strewn with stunning 19th century murals illustrating the Nimi Jatakas (the ten previous lives of the Buddha), I get lost in the scenes of local life and left wide-eyed at a suitably discouraging representation of hell … complete with ritual torture, snakes consuming humans and a set of massively engorged testicles. 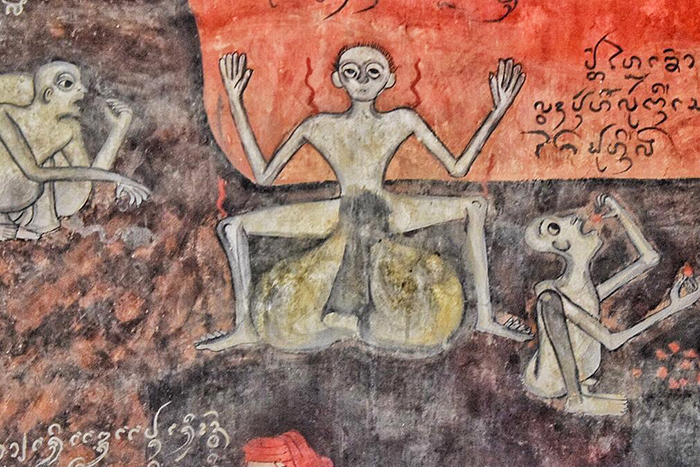 But amongst these unnerving images there is also love, the Wat’s most famous image being the more romantic, and thankfully genital-free, “Whisper of Love.” 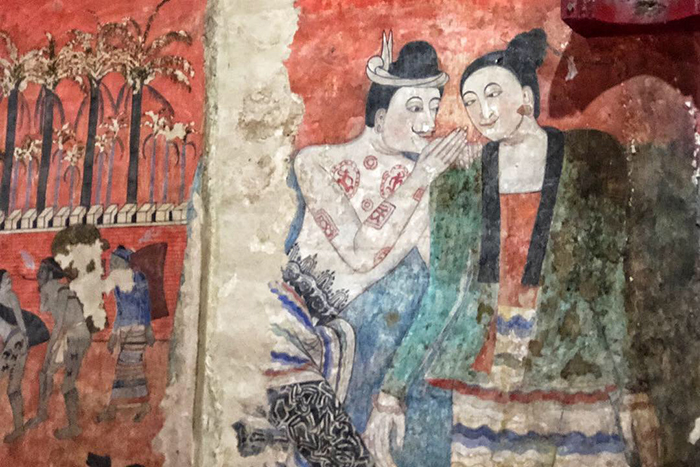 But while I am suitably moved by each, none of these is the temple I am looking for.

A glimpse of saffron robes and the ameliorating  hum of chanting monks meets me as I arrive at Nan’s Wat Phra That Chae Haeng, a massive complex that sits in a walled enclosure on top of a hill overlooking Nan and the surrounding valley.  As serendipitous as the soundtrack is, it isn’t until I stroll along a walkway flanked by two massive naga, that I feel the spiritual charge that has thus far been eluding me.

Dating back to 1355, Wat Phra That Chae Haeng is the most sacred wat in the Province and certainly beautiful, but no more than any of the other elaborate temples I’ve explored. But I feel a spark. A sense of connection. And then I see the sign that unbeknownst to me I’ve been searching for. Rabbits. 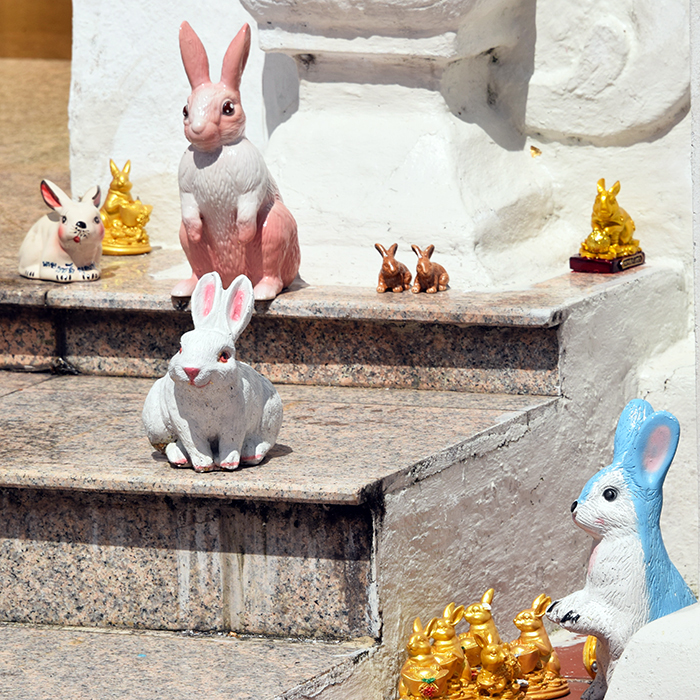 Yes, rabbits. Hundreds of cute and quirky bunny figures are secreted around the temple grounds. It turns out this complex is dedicated to the lunar year of the rabbit, which is not only my daughter’s lunar sign, but my mother’s. It just feels right.

I smile at the temple’s gloriously languid reclining Buddha, admire another eight mythological naga entwined over the exquisite Lanna-style assembly hall, and am left in awe of its 55-metre spiral-shaped chedi, said to house seven relics of the Buddha. 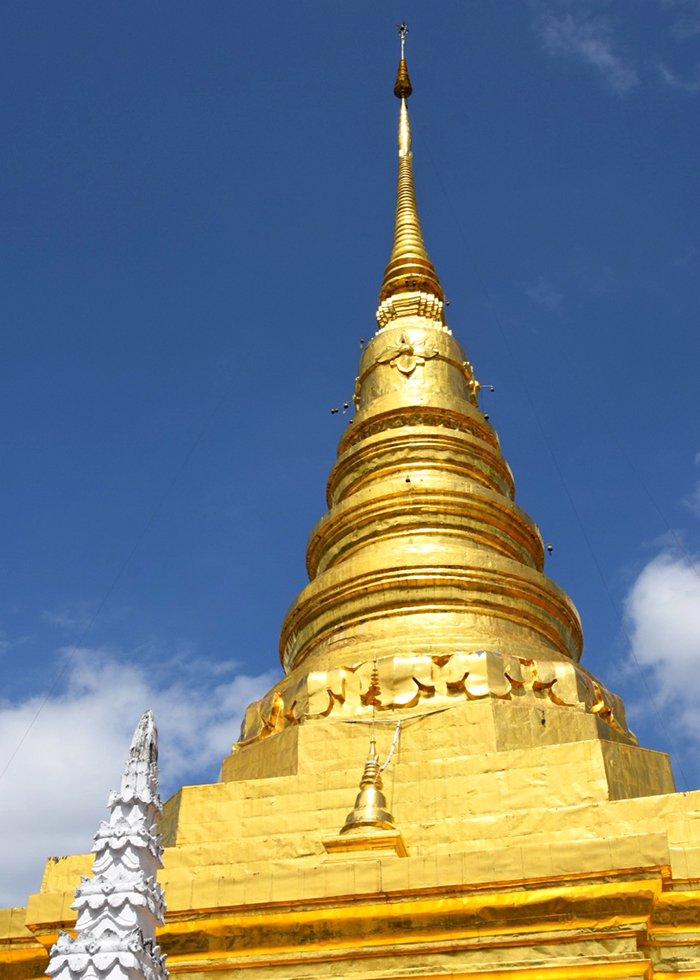 But it is when I am told of the seven miraculous events that occurred after the arrival of these relics, that I am struck deep in the soul. This is the one. For it is a miracle that I am seeking.

I scrawl and attach wishes to strings under the Boddhi tree and purchase a bunch of artfully folded lotus flowers, incense and a candle from a kind-eyed lady with a smile stained red from chewing betel quids. 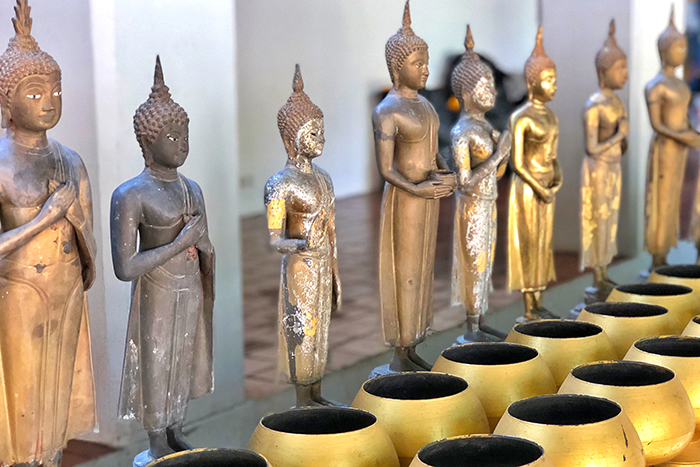 Barefoot, I solemnly enter the temple with my symbolic offerings, my progress observed only by the omnipotent all-seeing eyes of the Buddha images that fill its inner sanctum.

I place my candle carefully in front of the chedi and the flowers in water as I’ve been instructed. Then I light the three incense sticks from the candle and hold them between the palms of the hand, the smoke stinging my eyes. A convenient excuse for the tears that suddenly sprout from them. 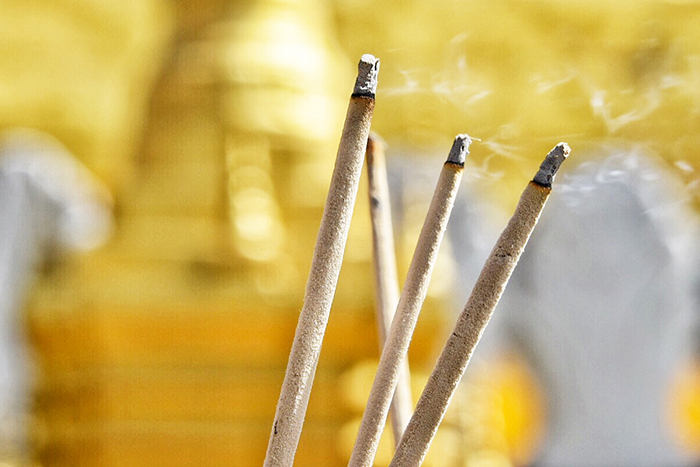 I wind my way three times clockwise around the perimeter of the chedi in sun so blazingly hot it leaves my feet blistered. And all the time I pray for my mother. For her pain to lessen. For the cancer that has ravaged her to her very bones to slow. For her to find peace. 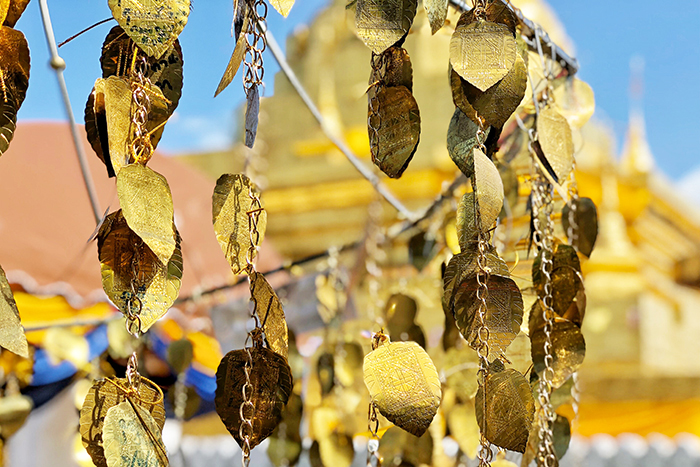 I leave emotionally spent. But I am forever spiritually bound to this temple and certain that I have been heard.

I’m just a little surprised when I discover by whom.

“You found it, didn’t you?” my mother asks when I return home a few days later, knowing I had been seeking spiritual comfort. I tell her of the rabbits, expecting her to laugh at my whimsy. But instead with a small knowing smile she names the day and the hour of my Wat Phra That Chae Haeng visit, telling me she knew when I’d found what I’d been seeking because she’d heard my wishes and, for a few fleeting moments, felt no pain and a great sense of peace.

They say two out of three is a good result.  And while the result was indeed miraculous, it didn’t deliver the outcome I sought. Sadly, as I was winding my way around the high, slender chedi, the cancer continued to do the same to my mother’s body. No amount of wishing or praying could slow its ferocity.

Just a short shocking week after my visit to Wat Phra That Chae Haeng, my brave, beloved mother left us, taking a sizeable chunk of my heart with her.  But I hold much comfort in that fact that even in a moment where thousands of kilometres had separated us, somehow, via a Buddhist temple filled with rabbits, my mother and I found connection, peace and love, together.

That moment. That small miracle. That is what I choose to cherish. That and a small golden rabbit who now accompanies me everywhere I go.

4 Comments on Musings and miracles in Thailand’s Nan Province