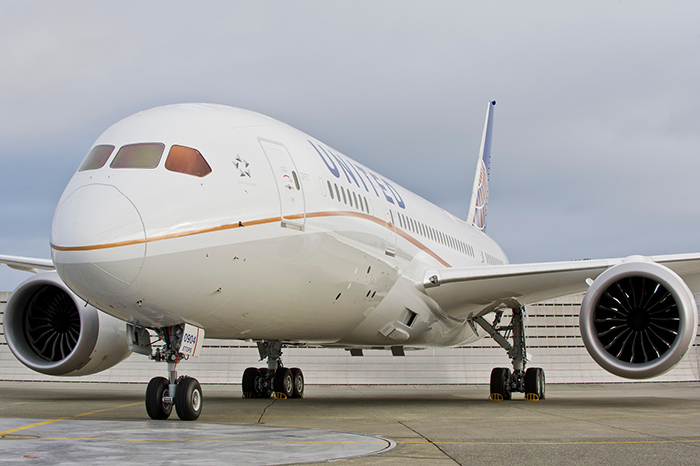 Its more than a touch problematic that anything even remotely resembling an aircraft has me reaching for the smelling salts as I spend an absurdly high proportion of my life in the sky. Because, given my unfortunate lack of feathers, I have no choice but to resort to hitching a ride on a big metal bird.

Is my fear logical? No. Of course it’s bloody not. Do I know all the stats about how safe it is? Of course, I bloody do. I’m phobic, not daft. But having eleventy billion or so flights under my belt, I now have my fears completely under control. At least, if you consider sweaty browed pre-flight anxiety, resorting to mainlining Rescue Remedy and rocking back and forth during take-off, landing and the bit in the middle, crazy-eyed with panic whenever the plane hits even the smallest amount of turbulence, “under control”.

My favourite flights are the really, really long ones (and by favourite, I mean dislike immensely). You know, flights like the 12,060-kilometre jaunt from Sydney to Los Angeles, which I’m about to board.

The good news is that I’m somewhat less stressed than I normally would be as I’m flying  United Economy Plus from Sydney to Los Angeles on the Boeing 787-9 Dreamliner, a plane I’m fond of due to its ambient lighting and space. The even better news is I’ve won the airline lottery because there’s an empty seat alongside me, and I’m given a heads up from a savvy flight attendant that an ameliorating G&T will be in my hands the minute the plane reaches altitude. I decide to take this all as a sign from the gods that I’m in for a good flight, though my forehead still beads up with sweat as we take off.

The seat and amenities 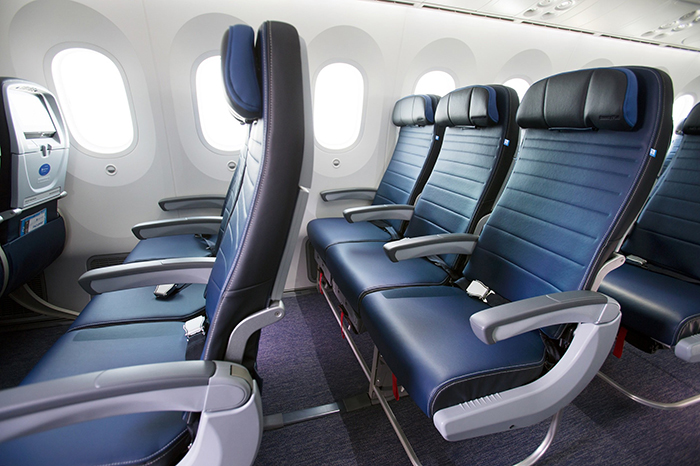 As per previous flights with United, my United Economy Plus flight from Sydney to Los Angeles turns out to be extremely pleasant, with zero yelping and not so much as a single rocking motion required from me. Indeed, from the minute my promised G&T appears, I pretty much forget I’m even in an airplane. And not just because I’m half cut after one (one thing I do like about flying is that it makes booze doubly effective).

Whilst some of the credit can go to the makers of Bombay Sapphire, more goes to my comfy Economy Plus seating, which provides an extremely affordable option between the squishy confines of a standard economy seat and the big buck business class seats at the pointy end of the plane. 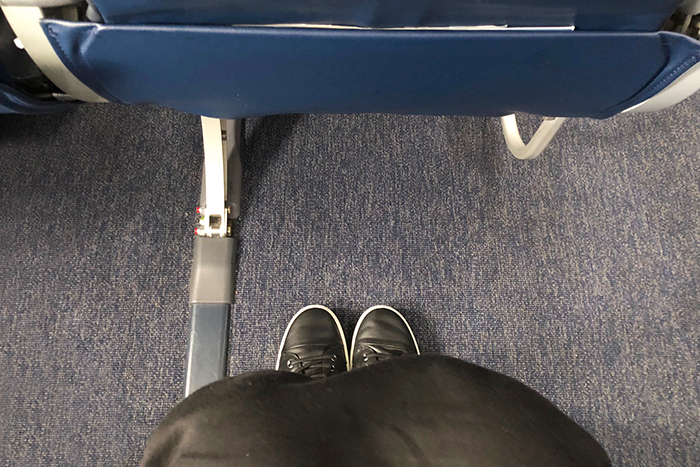 The 3-3-3 configuration of the aircraft’s seating feels pleasantly uncrowded and all are equipped with adjustable headrests with a pillow, blanket and headphones. While the seat width is the same as a standard economy seat at 17.3 inches, there are a solid few inches of extra legroom as well as a decent pinch of additional pitch, which makes an enormous difference to long-haul comfort. 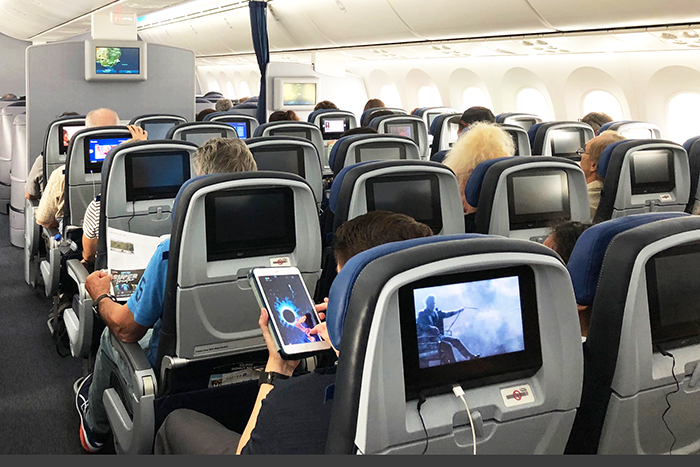 But there’s still the matter of 13 hours and 40 minutes to kill, and while I consider taking a nap, the likelihood of my anxiety-riddled self actually sleeping on a flight is about as likely as me not ordering another G&T.

So, I check out United Private Screening, the back-of-seat entertainment system which offers a stack of latest release and classic movies and TV, including plenty of family options, plus a selection of audio books. In my kid-free state, I’m soon happily ensconced in a selection of highbrow movies with snappy dialogue and actual storylines that involve neither animation nor superheroes.

There’s also onboard Wi-Fi (available at a fee per use), a USB charging port, and an international power outlet in between the seats.

A special mention has to go to the frankly awesome United app, which allows me to check my flight, view and change seat assignments, check in, and watch for upgrade status (the anticipation is like waiting for the last ball to drop in Lotto) all on my mobile. I can also access the app in flight to watch TV shows and movies on my phone, should I desire, and I can track the status of my checked bags and arrival gate details. 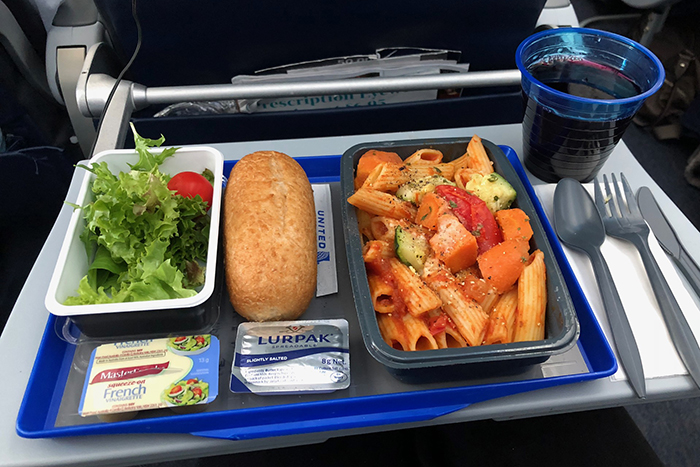 Another bonus for United Premium Plus passengers is that the cabin is located at the front of the plane, meaning they’re first up for the airline’s inflight service. While my Bombay Sapphire comes at a cost, there is a good selection of complimentary beers and wines, as well as tea, coffee and water, which are far more sensible for those wishing to stay hydrated during the long flight. Of course, once the G&T has worked its soothing magic, I order a nice glass of syrah. Sensible never was my thing.

Inflight meals are generous. Not long after take-off I enjoy a tasty main of tangy tomato pasta with vegetables, a salad and a wholemeal roll, with a red wine chaser. There’s also a creamy salted caramel swirl ice cream for desert.  A mid-flight snack of a tasty turkey roll and a couple of Tim Tams is consumed with equal appreciation.

As United Airlines appear to have perfected time travel (or the fact that we’ve crossed the international date line and there’s a 17-hour time difference, but let’s not quibble), the flight manages to land in LA several hours before it left Sydney, following a hearty breakfast of fresh fruit and a very edible sausage and egg number. 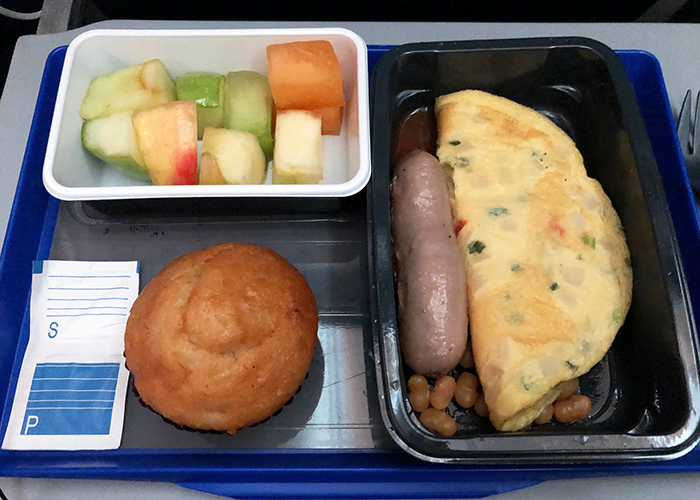 I feel fresh as I disembark my United Economy Plus Sydney to Los Angeles flight and dive into LAX, ready to face the heinous immigration queues I’ve been promised by everyone ever. But I’m happy to report, the process proves as ridiculously smooth as my flight.

Disclosure: I flew as a guest of United Airlines, but all sweat beaded brows, gin-swilling and opinions are my own