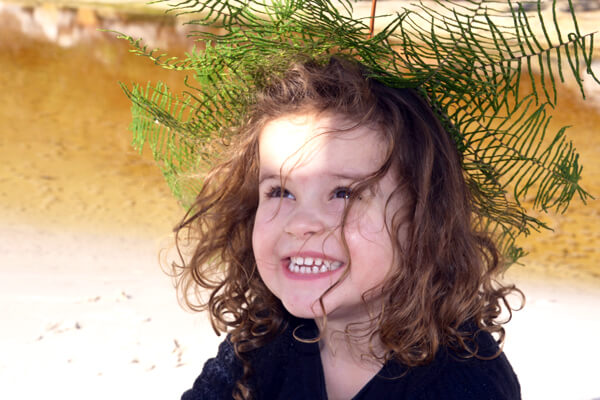 I bought my first beaten up jalopy before I’d learned to drive – such is my love of hitting the road. By the time I had my P plates I knew my way around its V6 engine so well that I could practically repair it myself. Mind you cars were pretty simple when I was a teenager. You know, back when dinosaurs still roamed the earth.

In spite of my impressive mechanical skills my parents were mortified when, at age 17, I packed my car, my meager savings and a couple of pals and hit the road to discover Australia. They predicted I’d be out of money and back home in a week. They were only out by four months. And I came home with change!

Fast forward a few decades and my adventurous offspring have inherited their mother’s passion for the road so there’s plenty of cheering when I suggest we pack Terry-Lulu – the Ford Territory Titanium that we’re driving for the Voices of 2014 Paint the Town Ford Challenge – for a Jervis Bay family getaway. 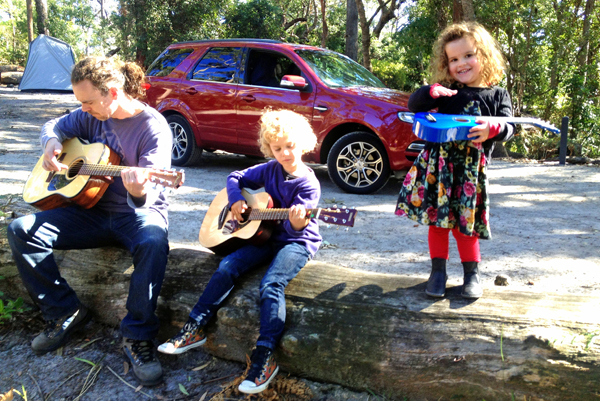 Given the Territory Titanium’s boot is the size of a football pitch, the kids take us a little too literally when we tell them they can pack whatever they want. But, even with our luggage, esky, bikes, toys, kites, scooters, stuffed sharks (don’t ask), an arsenal of plastic weapons and enough musical instruments for us to tour with the Rolling Stones, there’s still loads of room left… so the kids suggest we buy a dog! 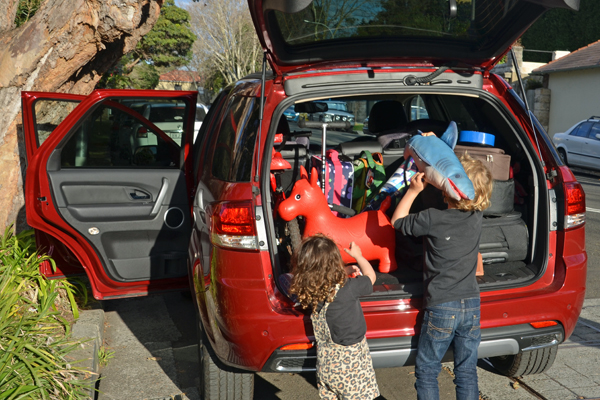 Terry-Lulu is only on loan and I’m not aware of any timeshare pet emporiums so, sans canine, we program the Ford’s easy to use navigation system, pop the iPod in the dock, stop any potential arguments about the temperature between my icicle loving husband and my warmth loving self by setting the dual-zone automatic air-con and hit the road for our weekend getaway.

To get a feel for a town we try to make the local markets our first stop and, as luck would have it, a monthly produce market is in full swing when we reach Huskisson. The tables of bursting ripe fruit and local delights, pretty pet parrots at a trinkets caravan, eccentric musos, oodles of great food and friendly people are a pretty good indication we’re going to like it here. 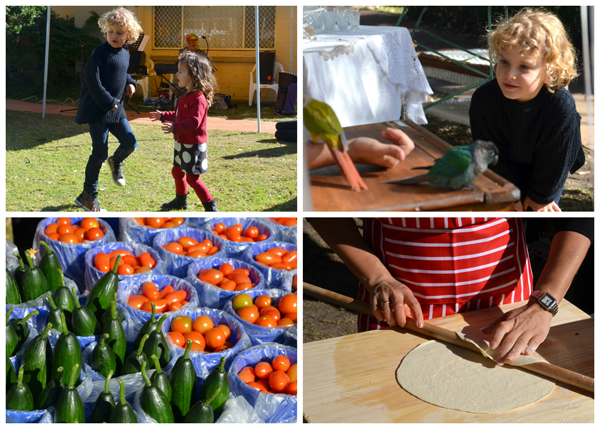 At pretty Greenwell Point we scoff luscious local oysters that are expertly shucked in front of us. 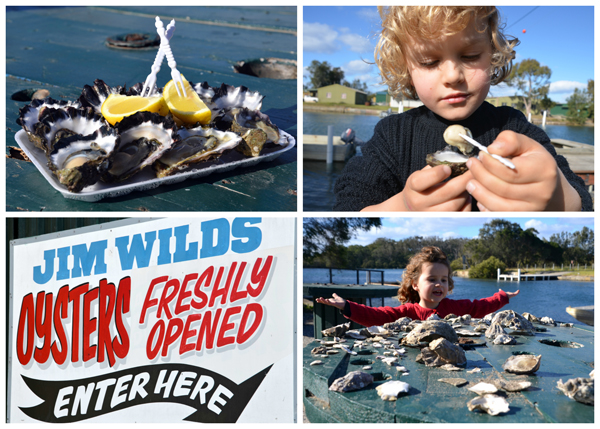 Sugarpuff balks at actually eating the moreish molluscs and instead, while we chat to the owners of Jim Wild’s Oyster Farm about the life cycle of their produce, sets up her own oyster shop. When we ask our little entrepreneur if we can buy one of her oysters she explains that they’re not going to be ready for another 2 years… but we can leave a deposit and come back to collect them then. 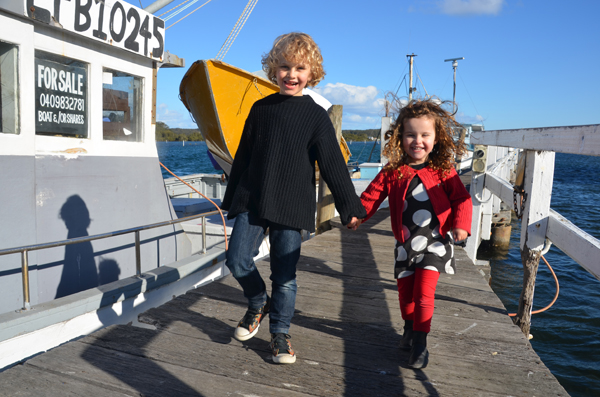 Whale Watching proves more fail than whale. It’s a little choppy on the water and besides one brief glimpse of a magnificent white tail, the only thing we see on the bumpy boat ride is people trialing the sick bags. We’re kindly offered the  option of a repeat cruise another day but given that Raffles drops and kisses the ground when we get back to Husky, I’d say that’s unlikely. 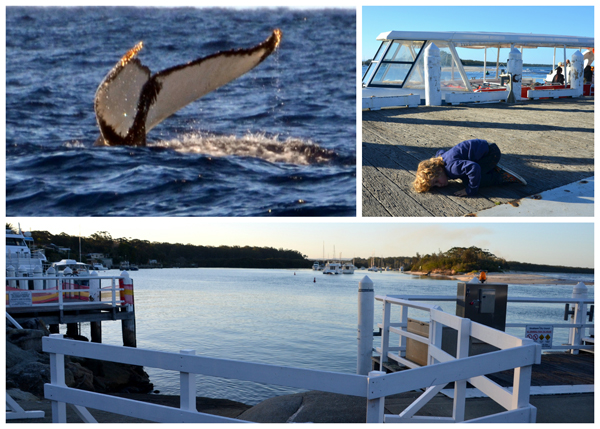 At stunning Hyams Beach we lose the rest of the afternoon collecting shells and building palatial castles in sand that the Guinness Book of Records says is the whitest in the world. 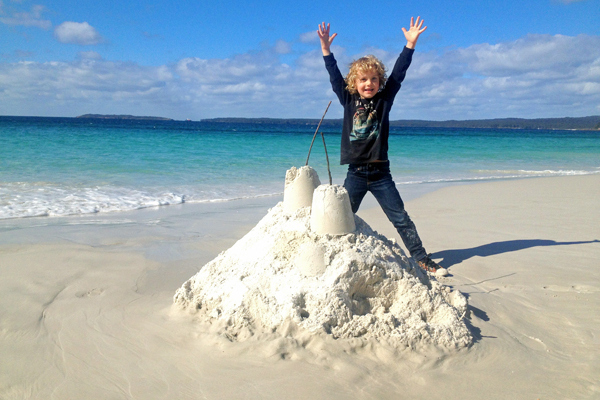 Sunday morning I awake early. With cuppa in hand I take a leisurely stroll along Huskisson beach to watch the sunrise and find myself waxing philosophic with a pod of dolphins who’ve dropped by for a friendly frolic just metres from shore. 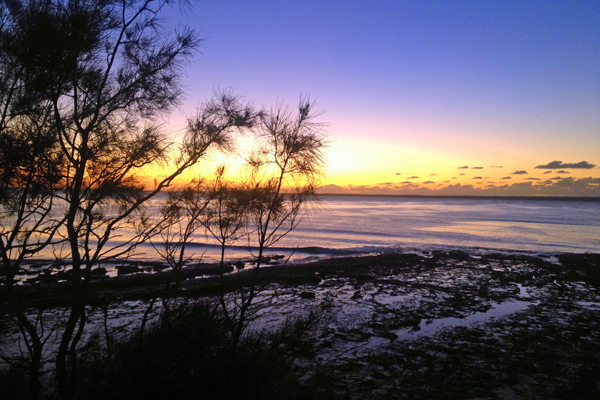 Sadly the rest of the family are still snoozing soundly and miss the magic moment. 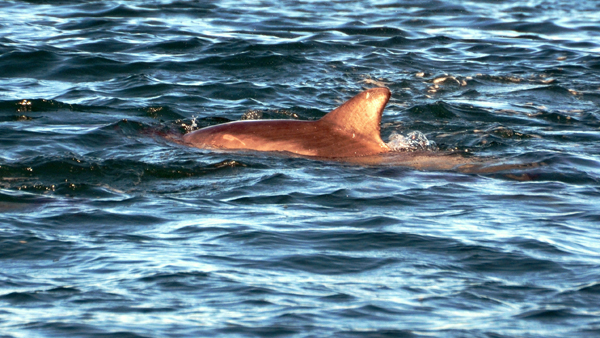 It’s time to get the kids for the weekend’s main event. As always this mama wants to expose her children to the culture of the places we roam. In Jervis Bay that culture goes back several millennia so we’ve organised a hot date at the spectacular Booderee National Park with members of the Wreck Bay Aboriginal Community, the area’s indigenous custodians. 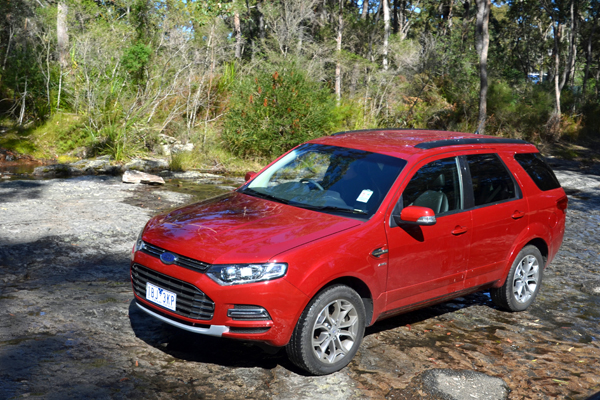 Booderee, is a word from the regional Dhurga language meaning ‘bay of plenty‘ and is a place of great significance for the local Indigenous people. The lovely Jenny Freeman and her son Clive of Galamban: Extraordinary Aboriginal Experience are here to tell us why and to share several lifetimes of knowledge passed on by an unbroken link of ancestors who lived here. 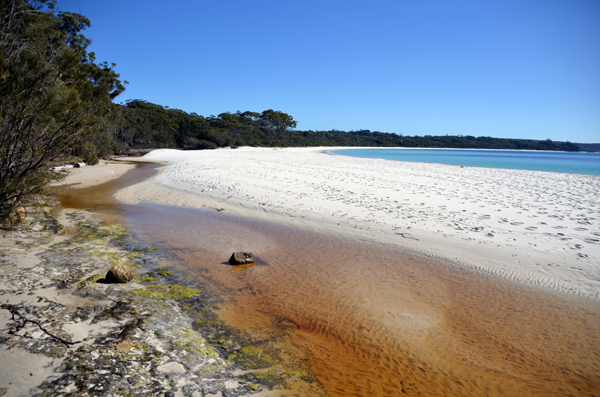 Jenny and Clive show us how to use plants to protect from mosquitoes and sunburn, make antiseptics and antibiotics and treat stings. 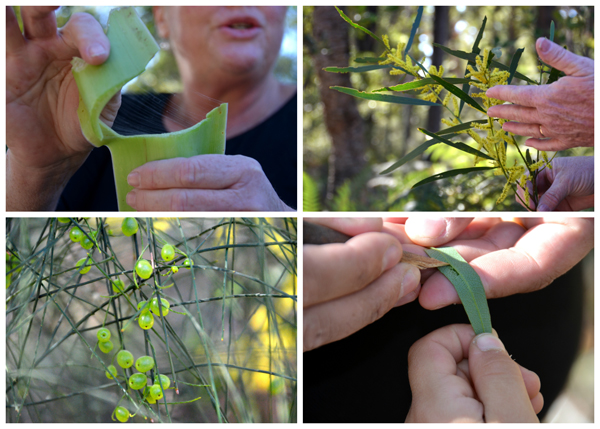 They make ropes from plant fibres, show us vines that can be woven into crab pots and explain how fish and plants react to the same weather changes and how they observe that. An awestruck Raffles rightly declares the Indigenous technologies genius. Sugarpuff? She’s mostly just enamoured with her pretty fern frond hat and callistemon hair brush. 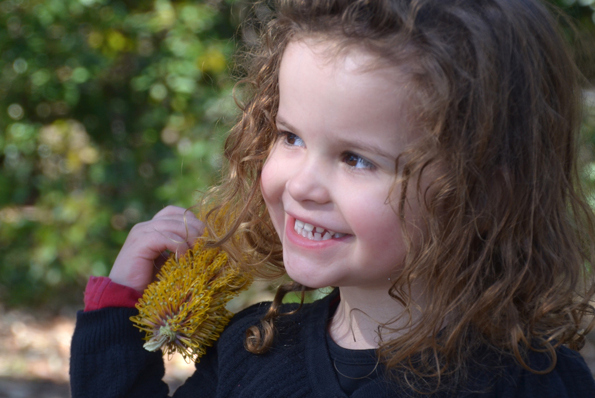 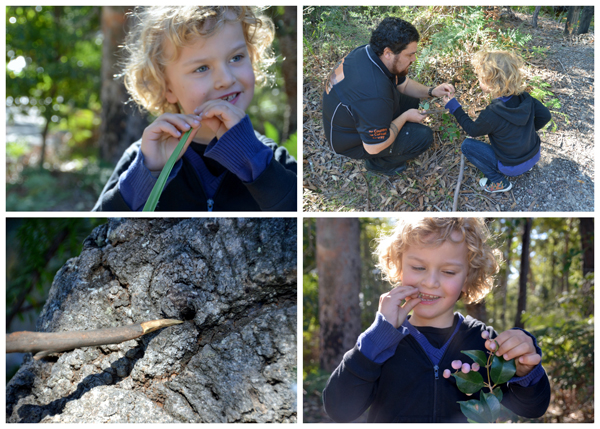 While pretty parrots flutter by Raffles is shown how to use a long thin leaf to make a whistle that will attract snakes (if he should feel like one for breakfast) and told how certain leaves placed in streams can attract and temporarily stun fish by taking oxygen from the water – making them easy to trap and catch. 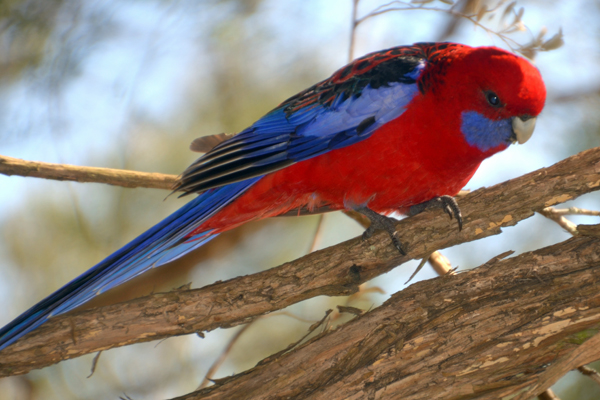 Before Raffles eats Jervis Bay out of National Park and we bid our farewells, my ever inquisitive son has one last curly question. “How did the first indigenous person get here?” Jenny shares an enchanting tale of how the land and the people were created by ancestral spirit brothers who took the form of wind and sea while my spellbound boy laps up every word. Beautiful. 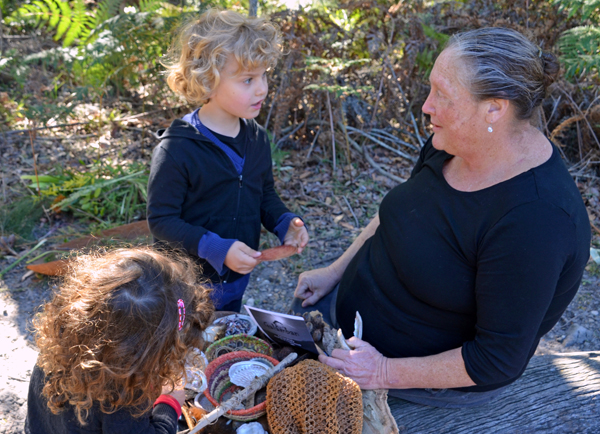 On the drive home we make a quick pit stop at Nan Tien Temple, the largest Buddhist temple in the Southern Hemisphere, for tea and a moment or two of tranquility and contemplation before hitting the road in the fabulous Ford once more. 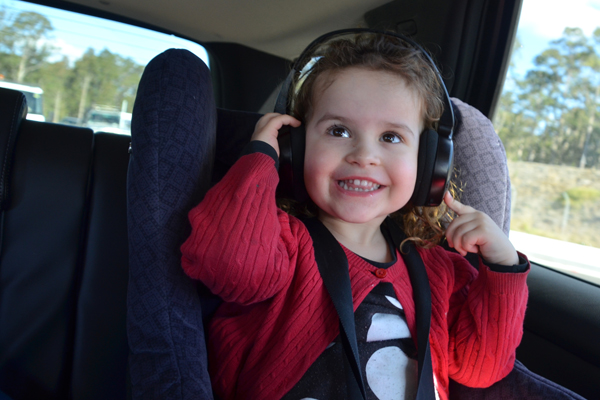 Just like the temple, the drive home in the Territory Titanium is whisper quiet as the kids are fixated on the car’s built-in DVD player watching Frozen. Again! But with the two clever wireless headphone sets that come with this magic mobile resting on their little heads I can’t hear a word. Well played Terry-Lulu, well played!

Thanks to Ford Australia and Kidspot, we’re delighted to be enjoying our adventures in a newFord Territory Titanium as part of the Voices of 2014 Paint the Town Ford Challenge. This is the last of the three posts we’ll be sharing on our adventures with the lovely Terry-Lulu (as the kids have dubbed the SUV). For more Painting the Town Ford you can read all about day tripping and urban adventures Territory Titanium style.