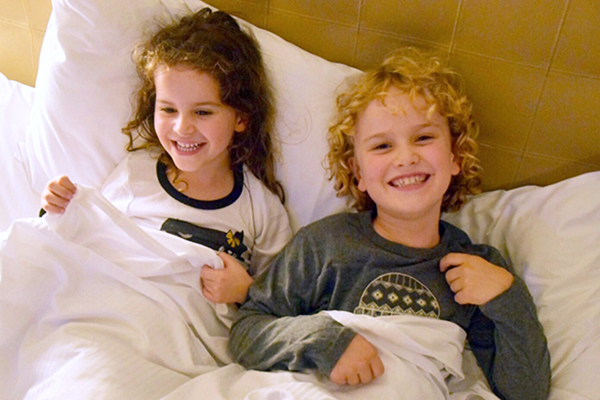 The winter blues make the best of us over-sleep and over-eat.  But rather than fighting it we’ve decided to embrace the over-indulgence with a weekend away, at home.

As the school holidays approach, the kids are getting a little tired and crabby. And so am I because a couple of whiney-arsed kids will do that to a person. Every. Single. Time. But I’ve decided to take action. We’re going to take a break from reality and run away for the weekend. By boat. Well, ferry if I’m being honest. But that sounds so much less glamorous.

By my calculations the 9.11 from Milsons Point should have us at our destination by about 9.30am. Allowing the five minutes it will take us to walk to the wharf from our house, the time on the harbour, and the two minute walk from the wharf to our hotel, I estimate our entire transit time will come in at under 30 minutes. Indeed, if we could be bothered driving, we’d be there in 7.

We’re not running far because we’ve learned that sometimes the best holidays are the ones where you play tourist in your own backyard. Taking a break without the standard four and a half hours of “are we freaking there yets” or the obligatory bickering over whose turn it is on the bloody iPad is always a good idea. Seriously, when you’re travelling longer distances with kids, getting there and back can sometimes be so draining that you need a holiday after the holiday.

Enter the Staycation. It’s all the fun of a hotel stay, and new adventures, without any of the hassle. Which is just what the doctor ordered for this family.

So Darling Harbour it is for us on this wet and wintery weekend. With so many kid-friendly attractions tucked into one spot (and most conveniently under cover) and the family friendly Novotel on Darling Harbour amping up the fun factor (and minimising the impact on our bank balance with accommodation and breakfast free for 2 children under 16), it’s the perfect spot for an escapeless escape. 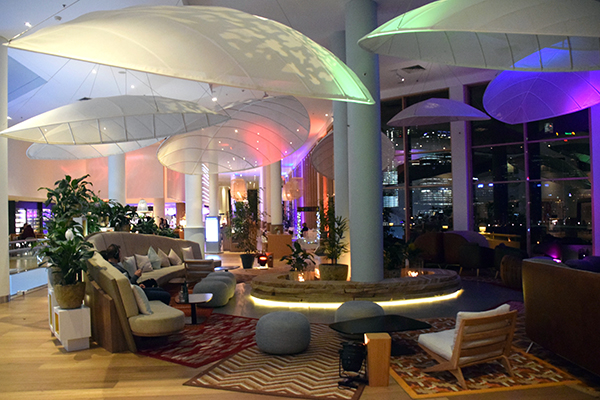 We know we’ve made the right decision as soon as Raffles and Sugarpuff spot the kid’s corner and free to use Wii consoles in the foyer at check in. It’s their holiday too, so we let them play a little while and enjoy a leisurely coffee in the hotel’s funky lounge. 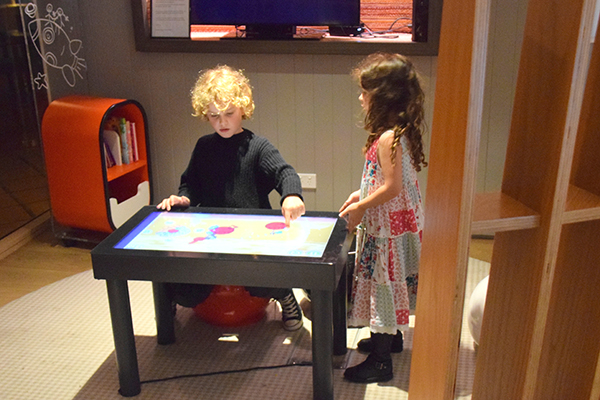 Caffeinated, we head up to our extremely spacious room where even more happy surprises await – two backpacks full of Angry Bird excitement for our little VIP’s and some fruit and a complimentary bottle of something alcoholic for their mama. Winning. 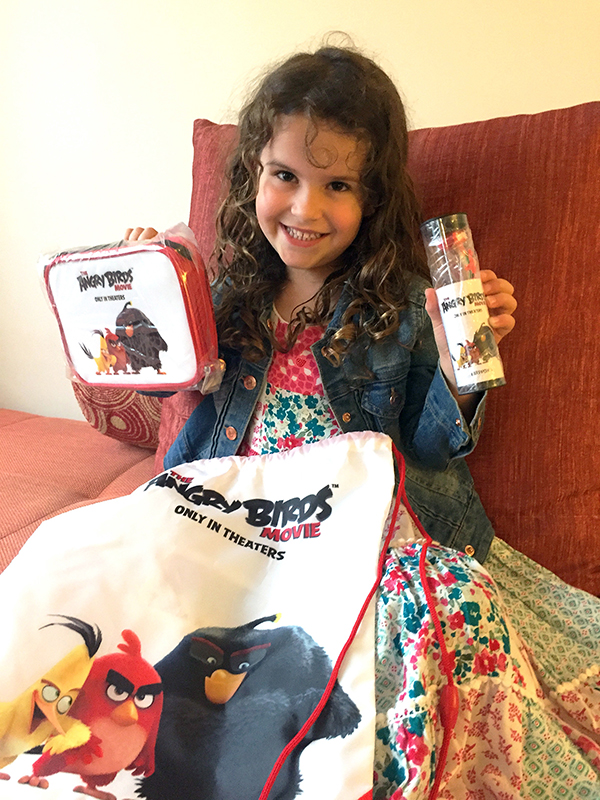 While the booze is a bonus, the Angry Birds goodies are a part of Novotel’s winter school holidays promotion, with instant prizes to be won at 24 participating Novotel hotels across Australia including $500 Accor gift cards, hotel food and beverage vouchers and cool Angry Birds movie merchandise.

The room itself is seriously comfortable with two double beds, loads of space and a gorgeous big day bed. 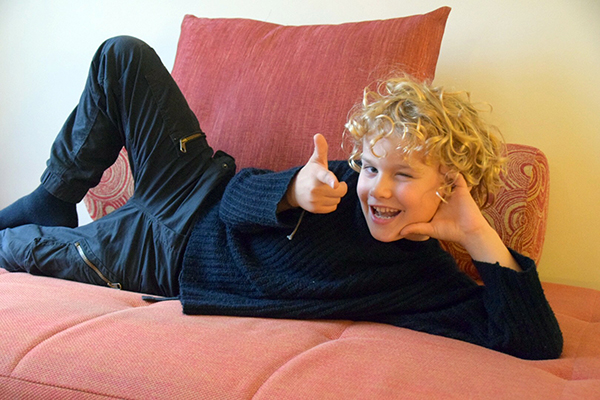 One of the more unusual features, at least for us, is the television… as an excited Raffles discovers he’s starring on it! Indeed he’s so excited to see himself on the hotels Insider TV (in a feature about Accor’s fab hotels in Singapore) he may never want to leave. 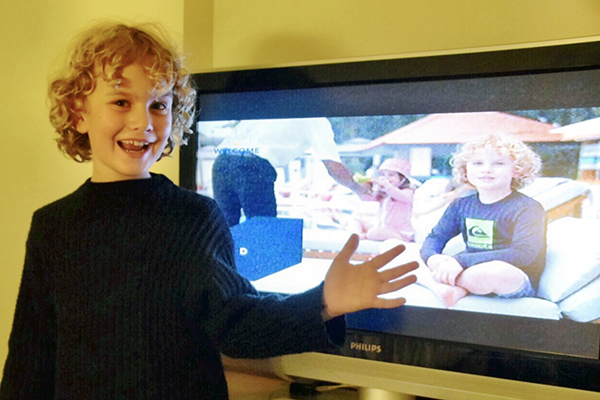 Of course, it starts to bucket down as soon as we decide to head off in search of lunch but we decide to brave the weather and head in to Chinatown, a ten-minute and ten thousand puddle walk from our digs. 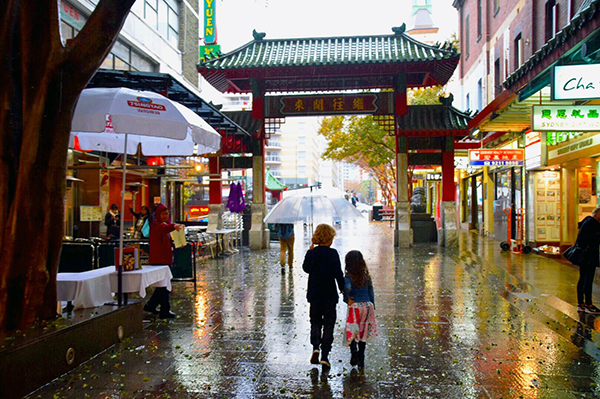 This may have been a mistake as Sugarpuff insists in jumping in each and every one of them and is a sodden mess by the time we arrive. But the life-changing tokotsu shoyu ramen at Ramen Ikkyu is so damned good it makes the drenching all worthwhile.

Back at Darling Harbour, Novotel has access to an undercover airbridge that leads straight into Harbourside, so we decide to spend the afternoon making the most of their kid–friendly offerings. We hop from Kingpin Bowling to M9 Laser Skirmish and 9D cinema, where Raffles and his dad fly through the jungle and ski down icy slopes with ninja assassins as rain, wind, snow, lightning, bubbles and fog envelop them. 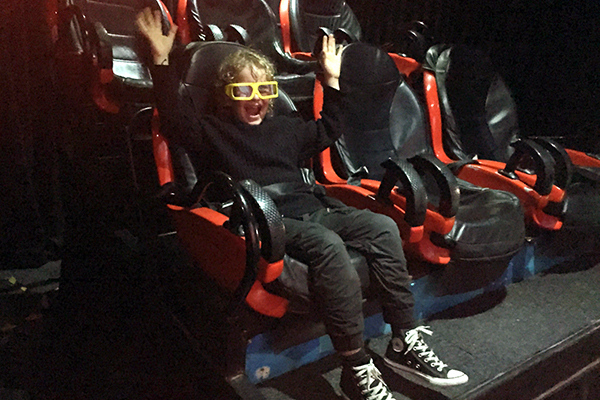 It is, alleges Raffles, epic! But Sugarpuff and I decide to head downstairs to San Churro instead. Because the chocolate and all that fried pastry fabulousness is also epic.

But because we’re bound to honour all of winter’s over-eating and over-sleeping ideals, we’re not done with feeding ourselves yet. We freshen up in our enormous room and watch as the sun (what little there is of it) goes down and Darling Harbour’s Ferris Wheel and the city skyline light up the night. Then it’s time to head down to The Ternary, the Novotel on Darling Harbour’s sensational dining venue, and yet more amazing views. 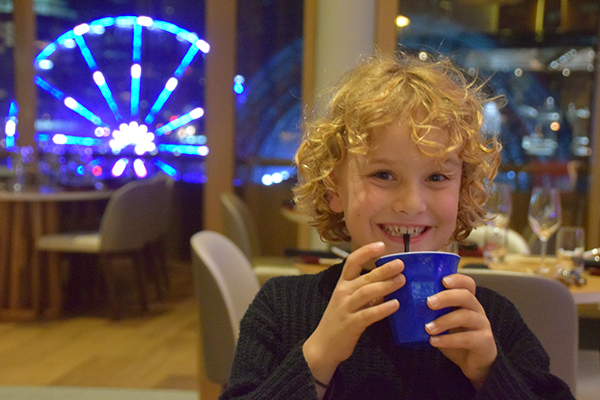 The spacious restaurant is a pleasant buzz of romancing couples, business people and happy families, including this one. The open Asian and Grill kitchen setup means Raffles can annoy the chefs at will.  And he does, frequently as he carefully notes their techniques, especially around the tandoor oven and the grill. 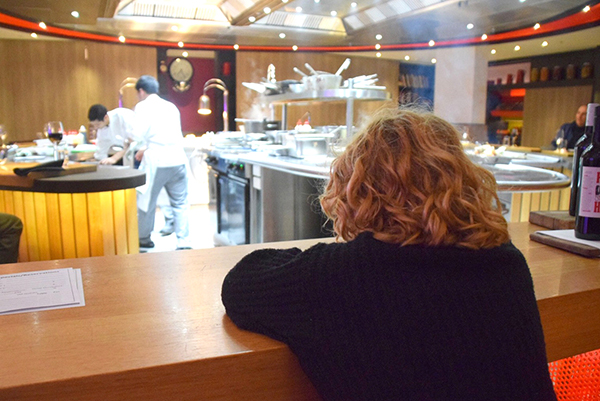 Meanwhile, Sugarpuff is sprawled all over the place with the colouring that’s set up on the table for her to enjoy with her fish and chips. 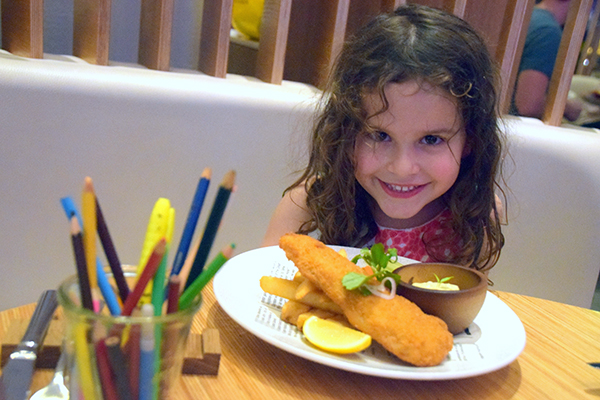 The waitress also brings a wooden tic tac toe set and the kids take on Mr Eats World between courses. And the food? It’s incredible. So much so I’ll leave it to Raffles to tell all in a separate post.

After we finish munching our way through share plates of Asian delicacies and piles of grilled seafood, Raffles new chef buddies send out enormous jars full of sticky sweet Eton mess as a special treat for my pampered offspring, and a rather delicious cocktail for their equally spoiled mama. 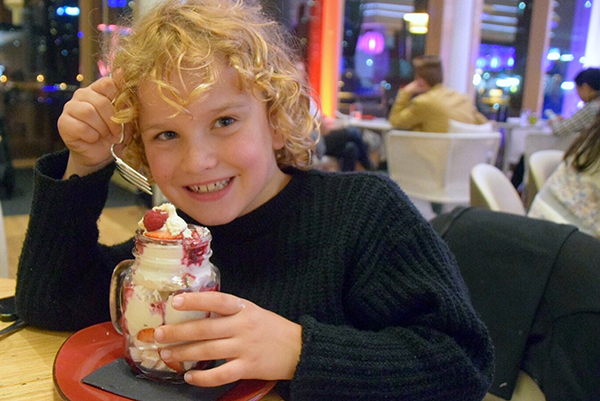 Sated, we waddle back to our room, don our PJ’s and jump in bed to watch a family movie, a bit of tradition when we’re staying at a hotel. As is a ritual rumble with daddy. 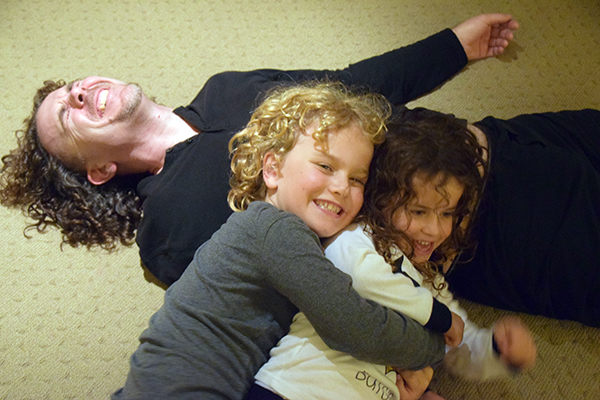 We’ve still a big sleep in, a buffet breakfast to wallow in and another day of Darling Harbour fun to enjoy. But, as we snuggle up together, the winter blues a distant memory, we’re already chalking this Novotel staycation up as a huge success.

5 reasons to staycation at Novotel on Darling Harbour this winter 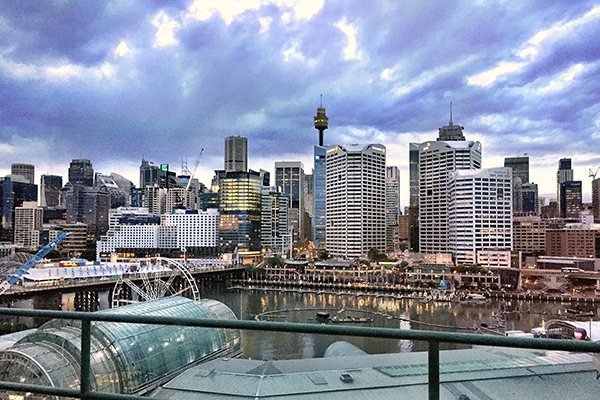 1. It’ll be a bargain Break – At Novotel hotels worldwide, kids under 16 stay and eat free and families can enjoy late checkout of 5pm on Sundays.

2. The Birds – Angry Birds that is! Stay at any participating Novotel hotel from 24th June to 16th July 2016 for a chance to win one of over 500 awesome Angry Birds Movie prizes.

2. The kids will be treated like VIP’s – Spacious and welcoming, Novotel’s family rooms are designed to accommodate 2 adults and 2 children in the greatest comfort. Plus there’s a cool kids’ hub in the lobby and a nutritious and delicious kids’ menu (as well as more refined eats for mum and dad).

4. It’ll be snow cool – During the winter school holidays Darling Harbour’s Cool Yule will be packed with family fun activities. There’s an open-air ice rink, a snow pit for building the obligatory snowman, fireworks, and a magical frozen forest made up of more than 100 glistening white trees and falling snow.

5. You’ll never run out of stuff to do – Darling Harbour is a hub of family fun with loads attractions, most of them undercover, for the kids including the Star of the Show Ferris Wheel, SEA LIFE Sydney Aquarium, WILDLIFE Sydney Zoo, Madame Tussauds, Australian National Maritime Museum, Imax, Kingpin Bowling, 9D Cinema and of course, the Darling Quarter Playground with its water play, climbing ropes, slides, swings, sandpits and flying foxes.

Disclosure: BoyEatsWorld were guests of Novotel on Darling Harbour