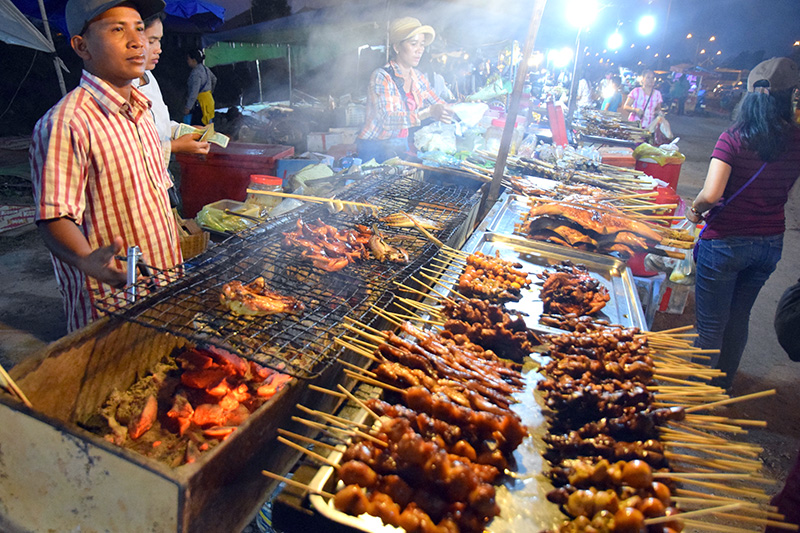 The temples of Angkor might be its most popular drawcard, but for this very hungry family Cambodia’s epicurean enchantments come a close second.

Cambodian cuisine has, in recent decades, lived in the shadow of its two culinary heavyweight neighbours, Thailand and Vietnam, but the culinary foundation of both cuisines was Angkor, when Southern Vietnam and a large part of Thailand were part of the Khmer Empire. If you’re looking for a simile of Thai or Vietnamese on your Cambodian plate, you’re probably going to be disappointed.

Of course, you’ll find the regional love of carefully balanced sweet, sour, salty and bitter flavours but centuries of external influence, from Chinese and Indian traders, as well as the gastronomic input of French colonists, saw Cambodia’s cuisine develop into something even more unique.

Sadly, Cambodia’s culinary traditions were very nearly lost to civil war, as cookbooks were destroyed by the Khmer Rouge as they were considered too bourgeois by its overlords. Happily, the country’s national cuisine is making a comeback following years of diligence by chefs to re-record and revive the quintessential recipes of Cambodia’s pre-Khmer Rouge heritage. 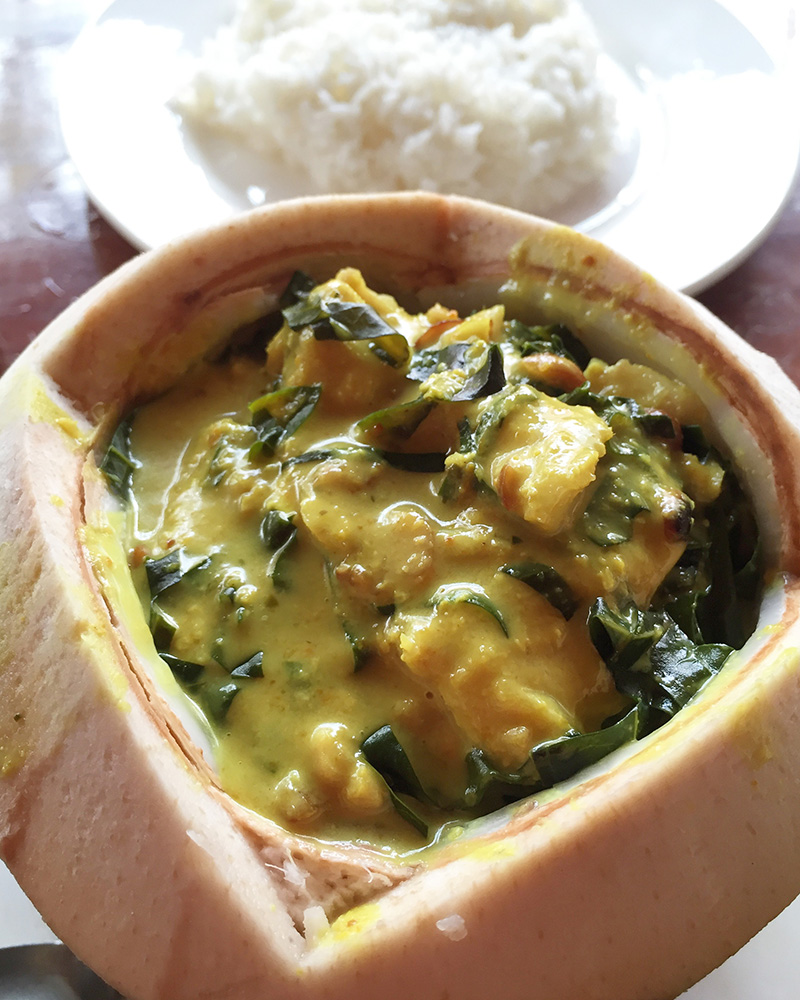 Protein heavy and frequently flavoured with pungent prahok, a crushed, salted and fermented fish paste that’s seen as an essential ingredient in Cambodian kitchens, most Cambodian cuisine is served with a side of rice or noodles. Due to its location, freshwater fish also plays a big part in the Cambodian cuisine.

In Cambodia’s southern cities of Sihanoukville, Kampot and Kep, fresh seafood is a bigger focus with fish, squid, lobster, prawn, crab and shellfish pulled fresh from the ocean and sold from seafood shacks along the beach. Stuffed Kampot squid is one of our favourites, the charred stuffed squid stuffed full of pork mince, noodles and aromatics devoured happily by my toothsome twosome. You can find our make at home recipe for stuffed barbecue squid here. 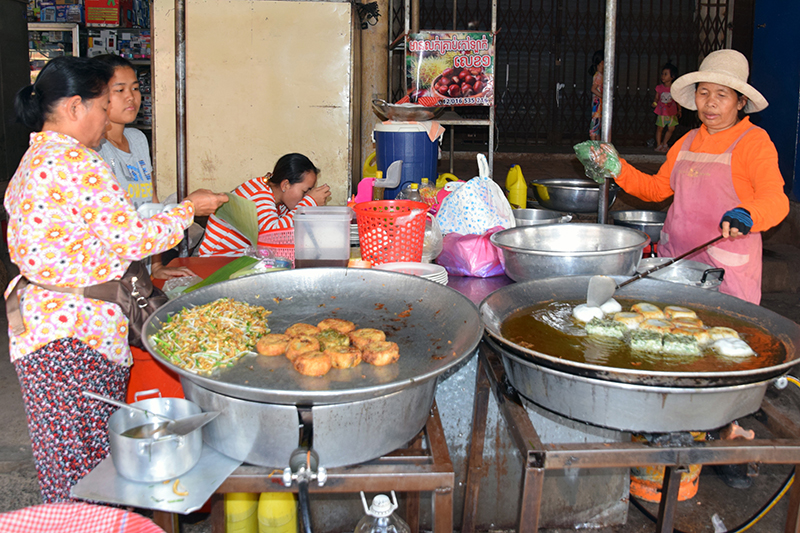 Many of the restaurants and cafes in Cambodia’s more popular tourist regions serve up dishes that have been modified for Western palates, so we reckon Cambodia’s markets – Phsar Leu Market is a favourite –  should be your first port of call if you are after a true taste of Khmer cuisine. Market meals that Raff and I love include Nom Banh Chok, a breakfast dish of thin rice noodles served with fish gravy and freshly foraged green vegetables, and lort cha, a dish of short rice-flour noodles fried with garlic, bean sprouts and chives, that bears a striking resemblance to a plate of worms.

Nom kachai, fried glutinous rice cakes dotted with chives and served with a vinegar and sweet pepper sauce, is always a good idea, unless you’re counting calories. If you’re craving something sweet, chet chien, bananas deep fried in spring roll wrappers, or a couple of crispy on the outside, chewy on the inside noum kong, the Khmer take on the doughnut, should do the trick.

And if you, like us, are more inclined to walk on the wild side, you can also partake in jerky-style frog, barbecued snake on a stick and deep-fried crickets, sold like bags of popcorn.

Throw another frog on the barbie 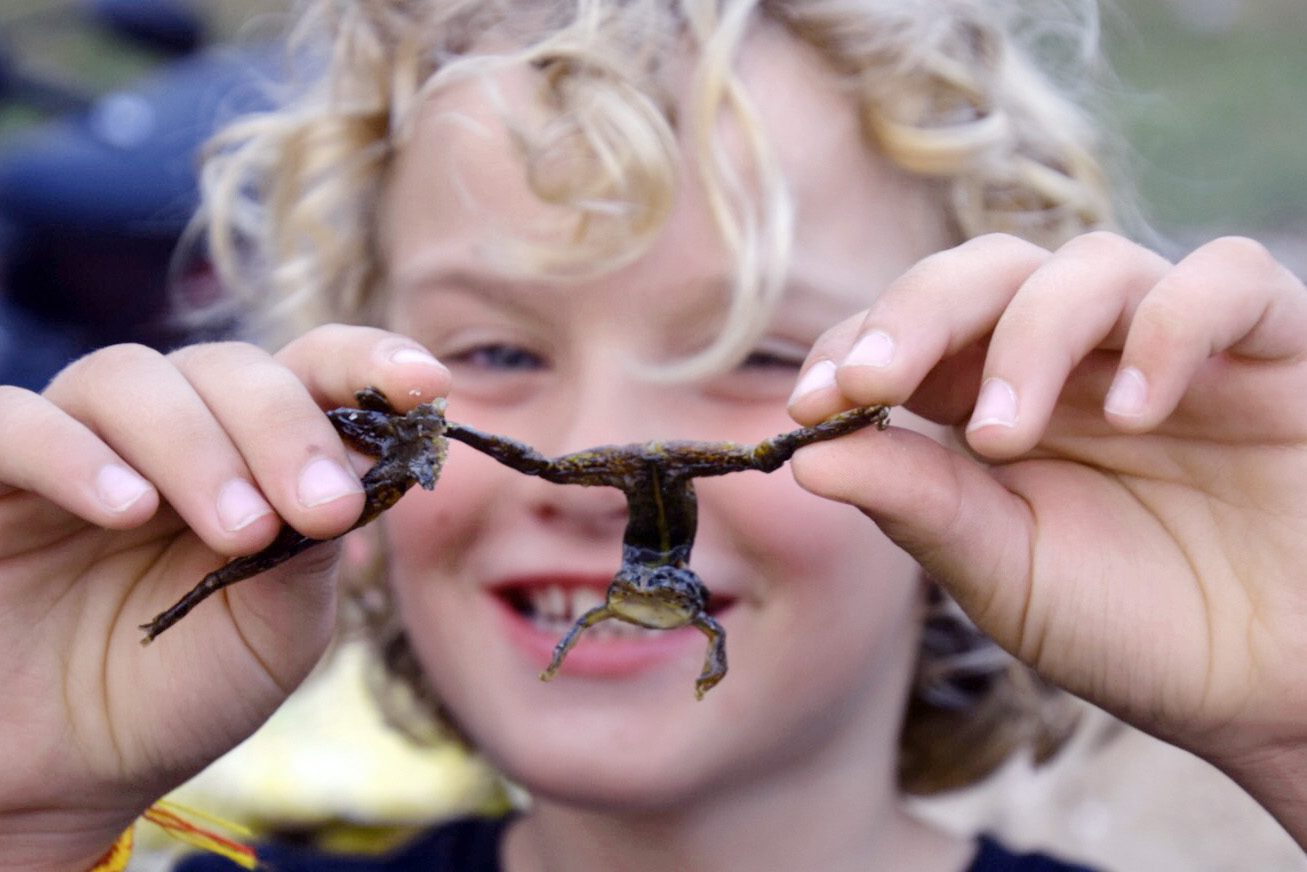 Like us Aussies, Cambodians love a barbie, and while it’s not unheard of to find shrimp (at least humongous prawns) they do tend to do things a little differently to us. Forget the steaks and lamb chops, instead expect to find a bunch of (sometimes indistinguishable) stuff on sticks, cooking over charcoal fires. We join dozens of local families gathered on roadside mats to dine on a variety of Cambodian barbecue delights at Siem Reap’s 60 Road.

Sizzle central, the street is lined with vendors serving up skewered whole fish and chicken, little balls of sweet red Cambodian pork sausage and a smorgasbord of random offal and organs javelined on bamboo sticks, stuffed skewered frogs and coiled snake shish kebabs, and the odd penis from of what I imagine is a cow with a fairly high-pitched moo.

This is a local street market and there is very little English spoken so if you’re nervous, we suggest to have a guide or host to help you distinguish the fish from the frog and the pork sausage from the pork sword. The atmosphere is amazing and a rickety fun fair at the end of the strip makes for a fun end to the evening. 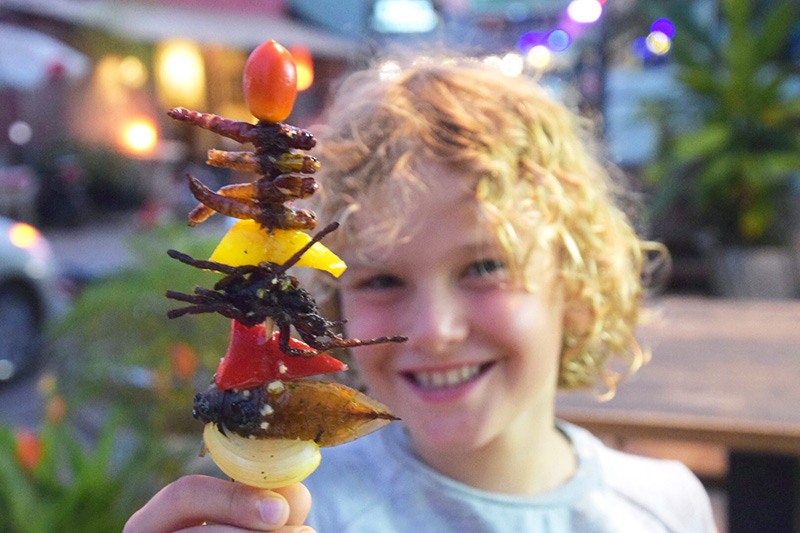 Already suffering from a lack of sustenance at the end of the Vietnam War, a catastrophic famine followed the Khmer Rouge takeover in 1975. Imposing collective farms, the Khmer Rouge burnt cookbooks and forced its already malnourished people into slave labour. But the rice yields were insufficient to feed the population and consuming insects, a great source of nutrition, became the difference between life and death. Despite Cambodia forging a brighter new future, the popularity of creepy crawly cuisine hasn’t faltered, a taste the U.N. Food and Agriculture Organization believes we all should acquire, as bugs are not only healthy for us, but for the environment, as they produce significantly lower emissions than other proteins.

While you’ll find tarantula treats all across the country, the town of Skuon is spider central. The market town about 90 minutes from Phnom Penh on National Highway 6, is crawling with them. At least it would be if they weren’t being boiled, dusted in batter and fried in oil. The legs of the sautéed spiders are quite crunchy and not unlike a slightly hairy crisp, but the abdomen is soft and filled with a white meat. And no, that flesh does not taste even remotely like chicken, it tastes like tarantula, and I gave seconds a hard pass. 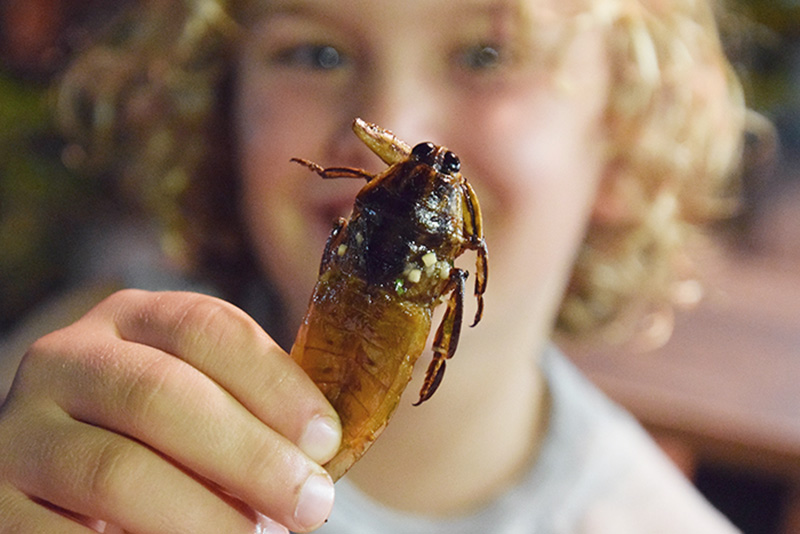 But we did enjoy a bug buffet at the wonderful Bugs Café , an insect tapas restaurant in Siem Reap that turns bugs into gourmet grub (in fact there are grubs on the menu if you’re partial to silk worm stir fry). From scorpions and spiders to ants and crickets, the entire meal, aside from a skewer of waterbugs (that look for all the world like giant cockroaches), was surprisingly delicious.

Food served with a side of heart 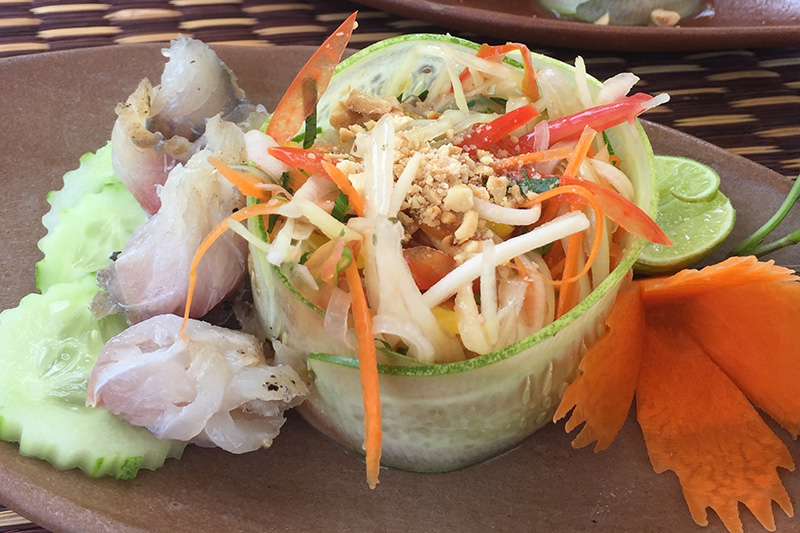 We think it is important to teach the kids to give a little back to local communities when we travel and certainly found plenty of opportunities when travelling in Cambodia, especially when it comes to food!  We enjoyed excellent western and Cambodian cuisine at some great NGO cafes and restaurants that employ and train vulnerable street children in an effort to help break the cycle of poverty.

Marum, in Siem Reap, is our top pick, not only for its fabulous food and pretty al fresco setting on one of the city’s loveliest streets, but because of its work with street children and other marginalised young people. Phnom Penh’s Friends the Restaurant, located near the National Museum, is also excellent, training Khmer street children and marginalised youth in the restaurant trade, while Epic Arts Café in Kampot, provides work opportunities for deaf and disabled people.