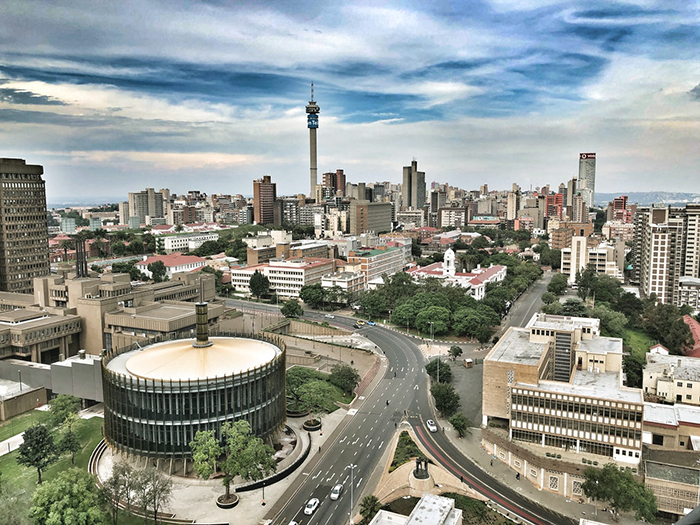 We manage to make it as far as customs before we’re on the receiving end our first chirpy “Howzit?”. Our honest answer? Excited. It’s our first visit to Johannesburg, or Jo’burg as it is affectionately known by locals, and we can’t wait to see what it has in store.

Johannesburg may not be the first destination that springs to mind for families visiting South Africa. In fact, most don’t even step foot outside of O.R. Tambo Airport, instead bouncing through the sprawling city on their way to other cities or on their way to Kruger for a safari. But not taking the time to explore this ever-evolving city is a mistake, because despite its tumultuous past, the locals are lovely, the weather great, the hotels ultra-chic, the stores trendy and there are so many things to do in Johannesburg with kids, we barely scratched the surface.

It would be remiss of me not to acknowledge that the city, though starting to find its own brash and bold voice, still has a reputation for crime, as does much of South Africa, but it is absolutely possible to have a safe and trouble-free stay – and loads of fun – by being aware and sensible. Which of course, we were not. (Spoiler alert: Despite our foolhardiness, we escaped completely unscathed and surprisingly smitten with the city).

Needless to say, no sooner had we checked in to AtholPlace Hotel & Villa in the chic, cosmopolitan suburb of Atholl, the kids and I were leaping into a gold hatchback with a friend we’d met the previous week in Cape Town, hooning our way to a random part of Soweto in search of a Kota to fill the copious hole that is Raff’s gob, before allowing him to climb up a 33-storey tower! Yep. Sensible stuff indeed! 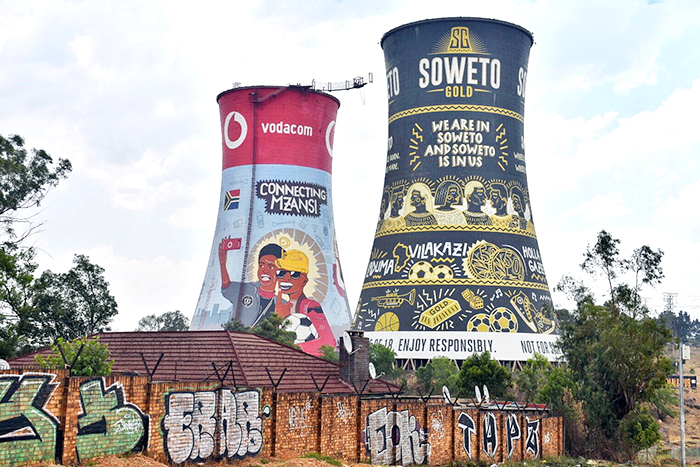 We wanted to see the real Jo’Burg, not just the fancy parts packed with five-star hotels and swanky cafes. And that means a visit to lively Soweto, a place that is a living reminder of the city’s troubled history.

Which is how we find ourselves starting our Soweto adventure in a tiny, local Kota Store in some random back street that I could never find again, chowing down on one of the famous street sandwiches. A relative of Durban’s famous Bunny Chow,  a Kota is a quarter loaf of bread, hollowed out and filled with hot chips, paloney, Russian sausage, fried egg and pickles. 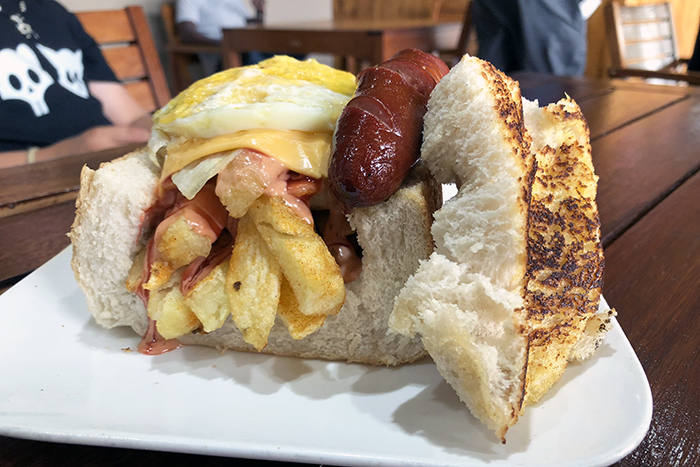 The Kota (quarter) is a popular street snack in Johannesburg

We also gobble a plate of fried chicken so numbingly spicy, my sweat was sweating. Upon emptying said plate, I receive a high five and a shouted “Lekker” (good) from the impressed cook, who was convinced the extreme heat of chilli crust would beat me.

Satiated, though numb-tongued, we head to the brightly painted Soweto Towers, a decommissioned power station, to watch bungee-jumpers leap off the 33-storey platform at the top of the twin towers. It’s one of the most unique things to do in Johannesburg with kids though sadly, my young adrenalin junkies don’t meet the age requirements to take a leap. And by sadly, I mean phew, because I was pooping myself that they’d make me join them. 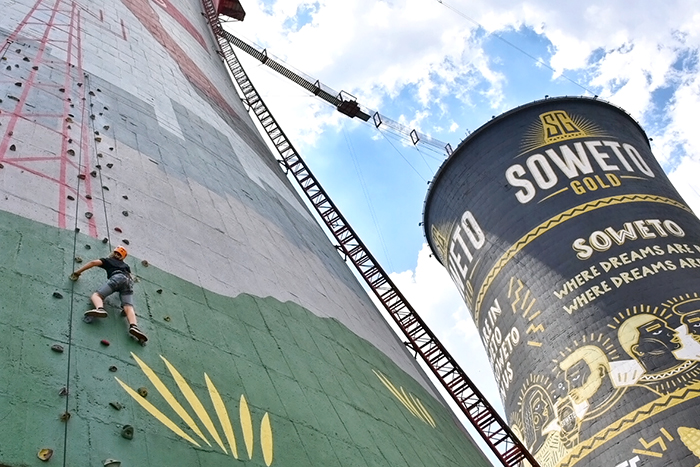 Instead, a determined Raff, channelling his best Spiderman, decides to climb straight up one of the towers. And he tackles it like a boss. It’s an experience that’s right at the top of Raff’s list of the best things to do in Johannesburg with kids. 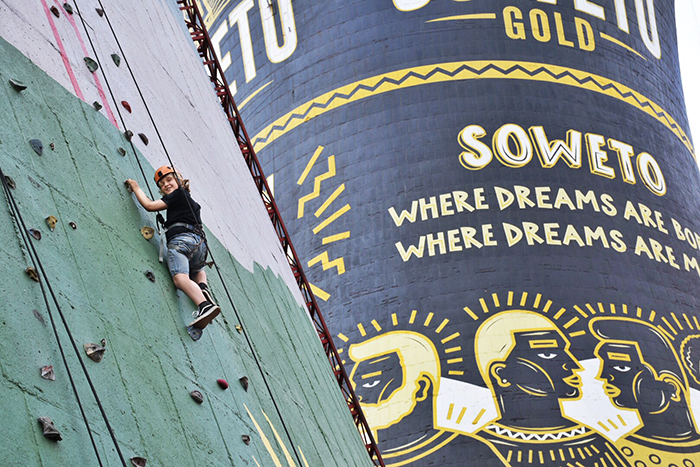 Easy peasy – for him at least.

Tummies full and adrenalin pumped, we head to Vilakazi Street to do the tourist thing. The long street of small homes looks not unlike the rest of Soweto, but has a very important claim to fame as the former home to of two Nobel Prize winners – former President Nelson Mandela and Archbishop Desmond Tutu.

We wander the street to check out the public art and pop up craft stalls, with lively drumming our soundtrack. Of course, we make the pilgrimage to the former home of President Nelson Mandela and his family. 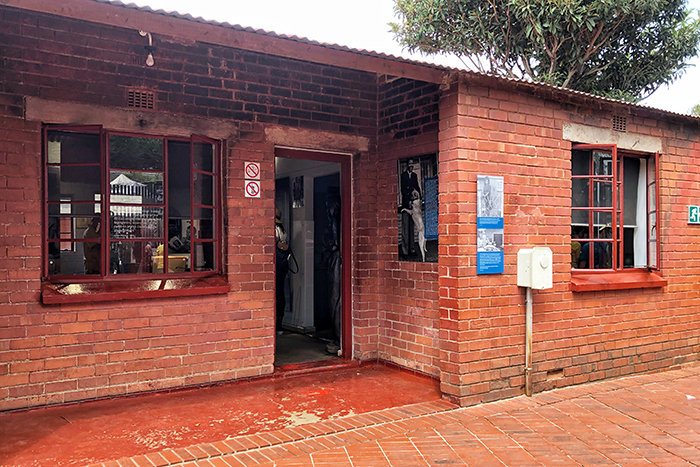 Now the Mandela House museum, the modest home is packed with memorabilia, artworks and photographs, along with a few sobering bullet holes dotting the walls. 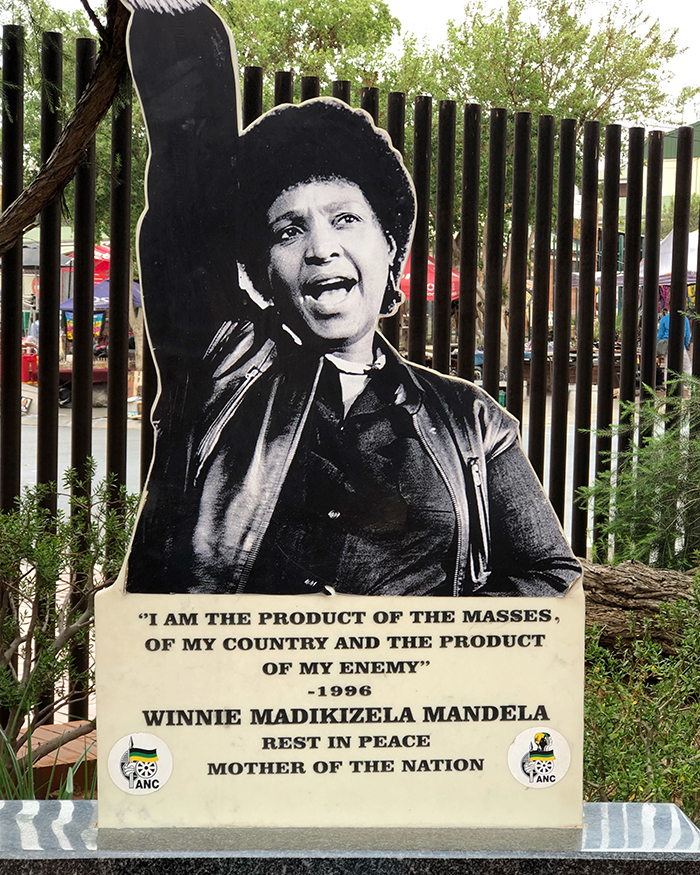 We experience more sombre moments at the Hector Pieterson Museum and Memorial, just a short walk from Mandela House. The museum is a tragic reminder of the Sowetan school children slain in a police massacre in 1976 and the ensuing Soweto Uprising. While some of the significance is lost on my privileged Aussie kids, they are still suitably fascinated by the stories shared by our guide.

Note: Whilst a visit to Soweto is a must, I would NOT recommend for visitors to Soweto to stray far from tourist strip of Vilakazi, or visit Soweto without a tour guide, as there is a high crime rate. However, we were lucky enough to be accompanied by our friend, a streetwise local and her cool 10-year old son, and they knew exactly what and where, was and wasn’t safe.

The Apartheid Museum with kids 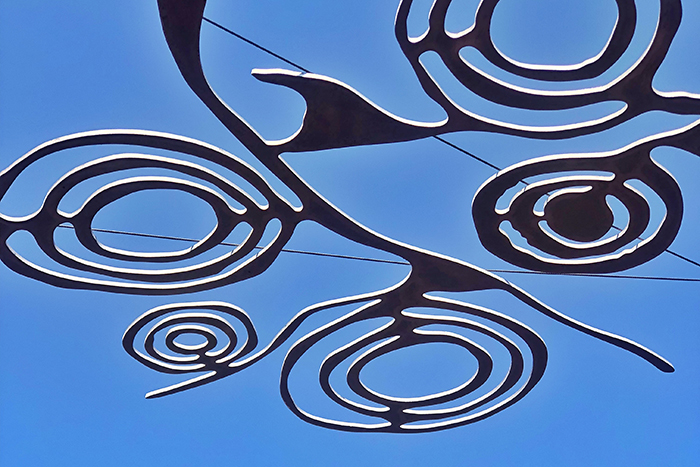 Aerial artwork at the Apartheid Museum

The significance of our visit to Soweto falls into place for the kids at Johannesburg’s Apartheid Museum. The multi-media museum powerfully shares the story of the rise and fall of apartheid. While it was never going to be fun, a visit is non-negotiable because, despite 25 years of democracy in South Africa, the kids have seen first-hand too many examples of the economic and racial divide that still exists throughout the country. To me, an understanding of the oppressive past and how the country is working towards the future was fundamental to their understanding.

The museum doesn’t waste any time in shocking them into what Apartheid – the state sanctioned system based solely on racial discrimination – might have felt like for those who lived through it. When we purchase our tickets Raff is classified as ‘white’ and Sugarpuff and I ‘non-white’ and are separated and sent through different entrances. 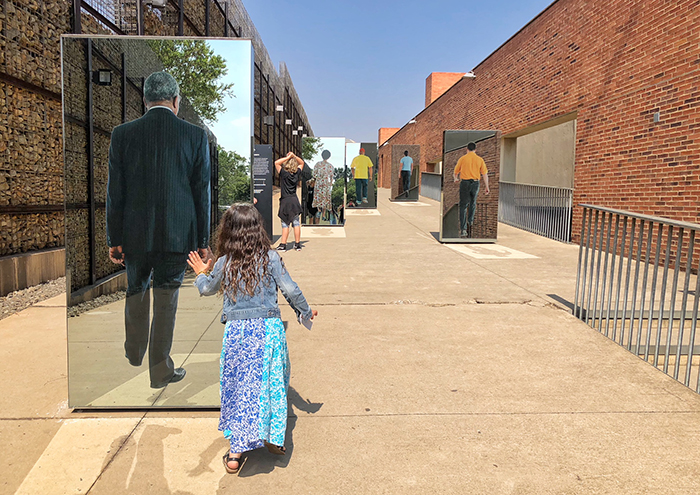 The sheer volume of exhibits at the museum, including film footage, photographs, text panels and artefacts, including a Casspir, a menacing mine-resistant ambush vehicle that the apartheid government used to patrol black townships, is overwhelming. But the museum has been so thoughtfully curated that both the kids, and I, are riveted. 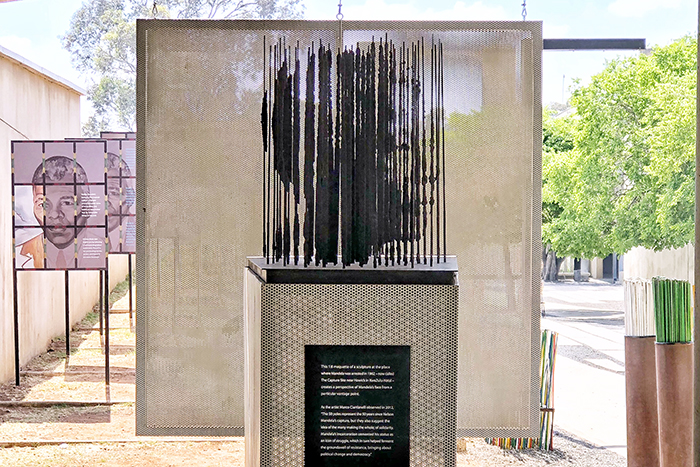 Mandela sculpture at The Apartheid Museum

The power of the entire experience does leave the kids a little emotionally exhausted, but also infused with wonder at the triumph of the human spirit over adversity. As a parent trying to raise good humans, I call that a successful outing.

The Cradle of Humankind with kids

Ready to head even further back in history, The Cradle of Humankind proves just the place. An easy drive from Johannesburg, The Cradle of Humankind is one of eight UNESCO World Heritage Sites in South Africa. Spread over 47,000 hectares and housing a complex of limestone caves and sinkholes, the site is believed to be the place humankind originated following the discovery of the first hominid Australopithecus.

The richest hominid fossil site in Africa, The Cradle of Humankind boasts 13 excavation sites recognised as heritage sites. There’s an exhibition centre at Maropeng focused on humankind’s evolvement over the past few million years with awesome interactive displays, exhibitions and a short indoor boat ride, all housed in what looks like a massive ancient burial mound. Another must see at the Cradle of Humankind is the Sterkfontein Caves, the dramatic site of the longest continuous paleoanthropological dig in the world.

It takes a while but the kids are finally historied out, our J’burg pals suggest a jaunt to the Gold Reef City Casino & Theme Park complex for a little light relief in the form of multi-level laser tag and a huge games arcade. One of the funnest things to in Johannesburg with kids, the theme park, boasts 18 epic rides, including extreme thrill rides the Anaconda, Tower of Terror and the Storm Chaser, a ride designed to replicate the experience of being trapped inside the eye of a tornado. Which I’m sure people who aren’t cowards would love. Being card carrying members of the latter group, we opt instead for soft-serve and bags of sugary goodness from Candylicous before heading back with our pals to spend the remains of the day lounging lazily around the sparkling pool at AtholPlace Hotel & Villa.

Johannesburg with kids – Need to know before you go

When to visit
Great weather makes Johannesburg a great year-round destination.
Language
While English is widely spoken, especially in the city, there are 11 official languages spoken in South Africa and the most commonly spoken languages are Zulu, Xhosa, and Afrikaans.
Currency
The Rand (R)
Power
Voltage is 230V and 50Hz. Power outlets are round three pin sockets.
Visa & Passport Requirements
A South African tourist visa is not required for citizens of Australia for a stay up to 90 days.  South Africa requires that all children entering or leaving the country carry an unabridged birth certificate and parental consent affidavits if they are travelling with only one parent. All visitors will require a passport valid for at least six (6) months.
Health
Johannesburg is free from malaria and safe for travellers of all age. However, Mosquito borne diseases including malaria are a risk for those transiting to Kruger National Park. When travelling with children prevention is best so apply child-safe insect repellent (with no more 20% DEET) at regular intervals and make sure they are dressed in long but light clothing at all times. While there are no essential vaccinations for travellers to South Africa at the time of publication, we advise visiting your family GP at least six weeks before travel for up to date advice on the latest recommendations and necessary immunisations.
Food Safety
Waterborne and food borne diseases are prevalent throughout South Africa. While tap water in major cities is generally safe to drink, it is best to avoid it in rural and regional areas. Avoid raw foods and food stalls with dubious hygiene standards. Only drink pasteurised or homogenised milk and avoid tummy bugs by following our safe eating mantra of “cook it, peel it or forget it.
Crime
Serious crime and violence is an issue throughout South Africa. Criminals are known to target travellers and their bags at O.R. Tambo airport and on public transport. Criminals posing as Tourist Police may ask to examine the contents of your bags, but this is a scam and no such force exists. Avoid high crime areas and keep cash and valuables such as flashy jewellery, cameras and phones out of sight. Ensure you visit townships, including Soweto, during daylight hours and always with an organised tour group. It is also advised that UBERs are a safer option than taxis in Johannesburg.