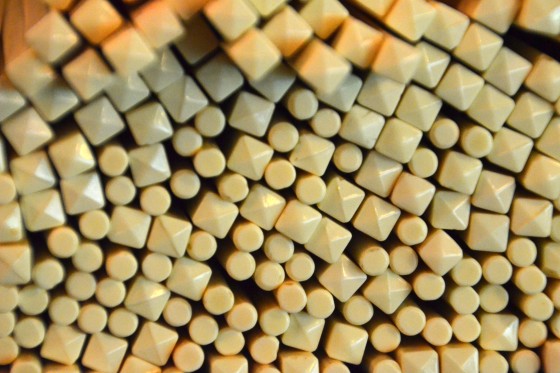 I’ve just returned from a week of gluttonous gallivanting around beautiful Taiwan. I know, I know, poor me. I’m hardly expecting sympathy cards or flowers. I also should point out at this juncture that this particular trip was a bigger deal to me than most and that though, I was looking forward to tasting Taiwan and its famed food, I honestly had doubts that I could handle the trip.

You see, it’s the very first I’ve travelled sans offspring since they were born. To be honest, it’s the first time that this besotted mama has spent more than 16 hours away from either of her hard-to-make progeny. Even that was just the once, a little over two years ago, and I was giving birth to Sugarpuff at the time, so I had a pretty good excuse.

For several weeks before departing on my epic Taiwan itinerary, my ever so slightly melodramatic mind was spinning with imagined scenarios that would rival the very worst daytime soap.  Would my kids miss me? Would they be OK? What if something happened to them while I was away? Would I die of mother guilt? What if something happened to me? Would Mr Eats World remarry an evil harridan or worse, a conservative pop music lover who would raise my precious babies without a love of French cheese, punk music and leopard print? Would I even be able to breathe without them in my immediate proximity? The short answer? Yes. Yes. It didn’t. I didn’t. It didn’t. He didn’t. I could.

To elucidate, I can happily report that they did indeed miss me and remained unscathed by the experience; my husband didn’t remarry in my week long absence; the kids still love French cheese; Mr Eats World taught them to sing a Rancid song while I was gone (which shows questionable parental judgement but I secretly think is kinda ok); and my daughter turned up at the airport clad in camo skinny jeans and a leopard print coat (again, a questionable choice but cute in a vision impaired hipster sort of way).

And, though I did feel a little like I was missing a limb the entire time I was away and thought about my little lovelies pretty much every minute of every day, I not only survived but actually had loads of fun! In fact, I think the break from bottom wiping and tantrums and a week of conversation, unfiltered of swear words, that didn’t centre around Ninja Turtles and Peppa Pig, may have just made me a better, and more relaxed, parent.

My week in beautiful Taiwan certainly made more of a mother of me. About 15 kgs more after a  week of memorable but mammoth meals has left me not only a card-carrying member of the Taiwanese Cuisine Fan Club but about six inches wider! Indeed, my fab fellow journalists and I were fed so much, so often, during our week of extreme gluttony that it crossed my mind that we may have stumbled into some macabre organ harvesting operation and our livers were being fattened up to be sold as human fois gras on the black market. Luckily, being typical journos we all drank so much during the gorging that our pickled livers were of little use to anyone and we returned home with all necessary organs in place, if slightly worse for wear.

Day one’s lunch time offering of chicken noodle soup and pig’s intestines in the squeaky clean streets of Taipei. I can hear the collective “ewwww” from here, but don’t diss it until you’ve tried it, it’s really quite tasty) and filled with all manner of good for you collagen! 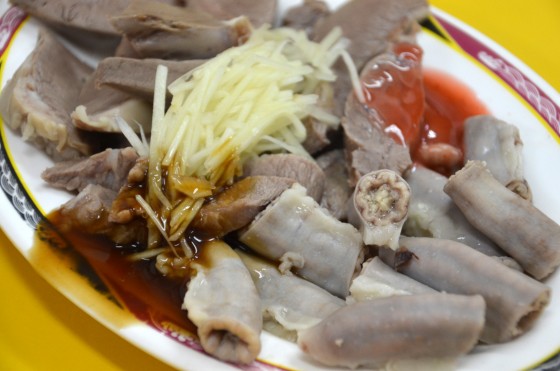 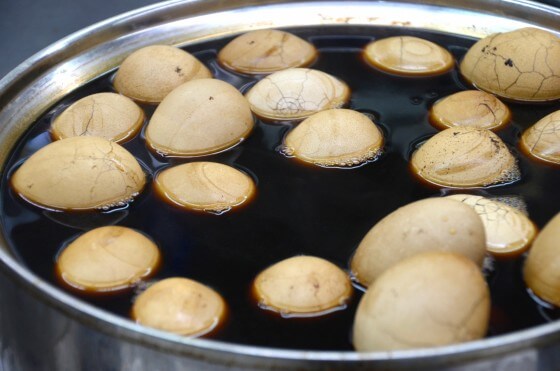 Tea Eggs (Cha ye dan), are so popular you’ll even find them they bobbing in a soy broth between the Hichew candies and mags at the thousands of 7 Elevens that dot the country. The convenience stores, like the eggs, are inescapable, but Tawain’s 7 Elevens are much more than what we’re used to. You’ll find hot treats including fish balls, pig’s blood cakes, dumplings and tofu, right alongside the hot dogs. Jelly drinks jostling for position alongside cans of Coca Cola and bags of dried seaweed and fish alongside the potato chips. Seriously, they even do laundry. That’s what I call convenient. 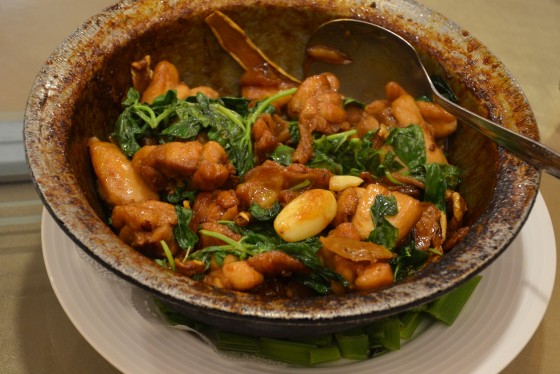 The Howard Plaza’s Formosa, in downtown Taipei, was the venue for our first dinner feast, and a fabulous introduction to the kind of authentic cuisine that the Taiwanese make at home it was. We started with plump juicy oysters sautéed in black soy bean, sweet potato congee, tender fried fillet of pork with soy sauce, fried preserved turnip omelettes and the most delicious crispy mushrooms I’ve ever tasted.

Sated, we were all ready to head home but the chef had other ideas and the food just kept coming, platter after heaving platter of it. Slippery and succulent sauteed loofah (yes, you read that right, loofah, in its fresh pre-cellulite buffing form). Stir fried wild vegetables, asparagus with lily root and three cup chicken came next. Then deep fried fish in the most amazing sweet and sour sauce which (besides not being fluorescent orange) was as blissfully far away from tasting like the stuff we get back home as you could imagine. It was a night of many highlights… not least of which was a fairly surreal ukulele performance of “The Pub With No Beer” to an audience that included a posse of extremely polite locals, a hotelier who’d done his training at the Benny Hill school of comedy, an Austrian envoy (a man afflicted with an odd nervous tick when anyone mentioned “Edelweiss”) and an inebriated emissary from Lyon. And which I’m sure was directed by Terry Gilliam. On a bender. 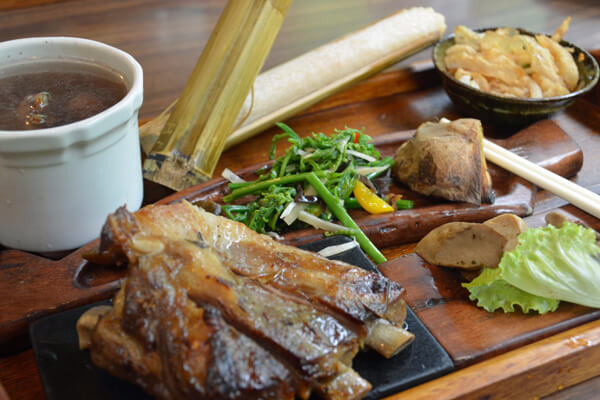 In Toroko Gorge we were introduced to the Indigenous cuisine of taiwan at the indigenous owned Leader Village Taroko Resort – the perfect spot to suck up a little of Taroko’s magnificent serenity while we gorge ourselves, if you’ll pardon the pun, on lunch. The platter of succulent wild boar ribs served with wild native ferns was a joy to eat.

Dive in to Din Tai Fung

Famous for its steamy, soup-filled dumplings (xiao long bao ), Michelin starred Din Tai Fung, originated in Taiwan and has spread across the globe. But nowhere is it better than in the place it originated. Be sure to drop in  for perfect dumplings along with other Taiwanese-inspired delights including soup, rice, noodle and stir-frys. 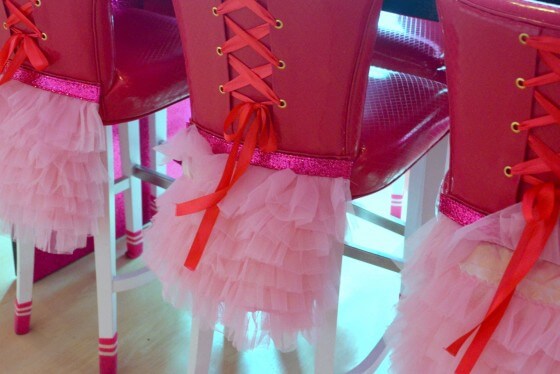 From the ultra cute  Barbie Cafe (now closed), Hello Kitty Sweets and magic-themed restaurant, Déjà vu, to the airplane-themed A380 Restaurant and the infamous Modern Toilet – a nationwide restaurant chain where food is served in miniature toilet bowls and the chocolate soft-serve is shaped like you know what, quirky themed restaurants and cafes are all the rage in Taipei.

33 Comments on Tasting Taiwan: A glutton’s guide to food in Taiwan