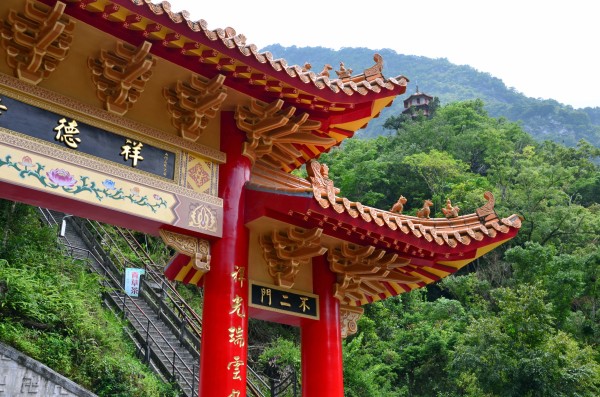 I’ve written before about my love for Taiwan, one of the few destinations that I’ve ever visited with few preconceptions or expectations.  I guess, if anything, I expected to find a lot of factories stamping “Made in Taiwan” on to plastic toys. Because I vaguely recall that the Barbie dolls I shaved and tattooed as a child  came from there and that Buzz Lightyear had it stamped on his wristband in Toy Story… That’s some serious research right there, people.

Seriously, who knew about the tiny island’s high mountains, marble canyons, hot springs, super cool cities… and all that amazing food? Well, besides 23 and a bit million Taiwanese people and anyone who has ever bothered to visit?

What I wasn’t expecting, besides all that fabulousness, was to develop such an intense infatuation for the clean, green little island and the genuinely lovely people I encountered on my travels around it. I’m talking about you, gorgeous tour guide who we all fell head over heels in love with. And you, lovely waitress who surprised me with extra dishes once you realised I wasn’t a chicken-shit. And you, gorgeous children in Hualien who I played with for hours even though you clearly thought I was a giant red-headed buffoon. 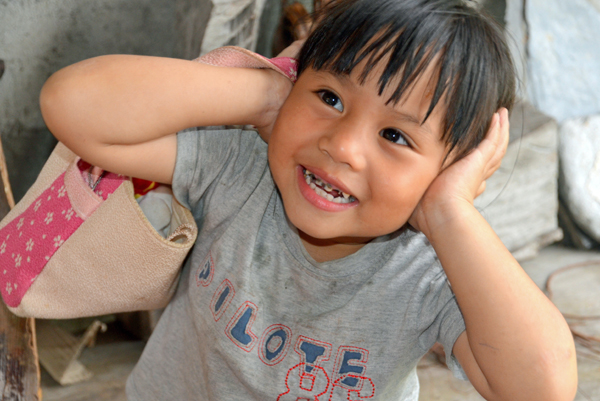 And you, nice young couple who took time out to escort me where I needed to go when I got lost… even though you couldn’t speak a word of English and I couldn’t speak Taiwanese. And you too, weird friendly hipster dudes in a strange but cool bar in the arse-end of nowhere. And of course you, young Brad Pitt look-alike backpacker guy in random bar that I didn’t actually speak to but who I immensely enjoyed perving at… though technically you weren’t Taiwanese.

I told y’all about the food, which is incredible, here. I extolled the virtues of Taipei’s arsenal of kitsch, retina-searing and quite frankly ridiculous novelty restaurants here. And I even made you tofu the Taiwanese way here.

What I haven’t done is tell you about Taiwan’s amazing natural beauty. 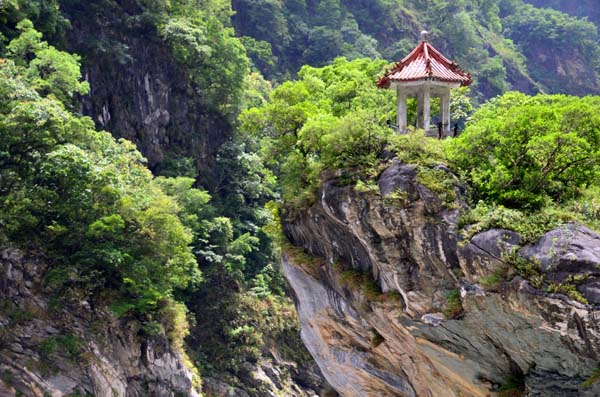 And that is a massive oversight on my part for which I owe Taiwan my most humble of apologies. You see, though the entire island is only about half the size of Tasmania, the countryside is awash with sparkling lakes, deep valleys and lofty mountains, indulgent hot spring towns (another time), and the extraordinary Taroko Gorge. 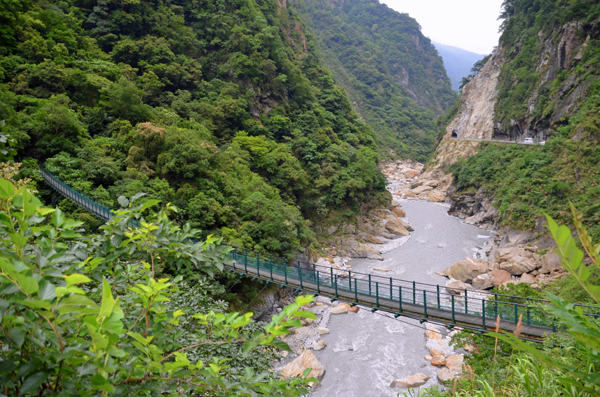 In the Hualien province, on Taiwan’s east coast, a narrow road twists its way through 19 kilometres of marble chasm, past shrines and temples, across precarious ledges and coloured bridges that cross the Liwu River, whose erosive blue waters have been busily carving the gorge from marble over millions of years. 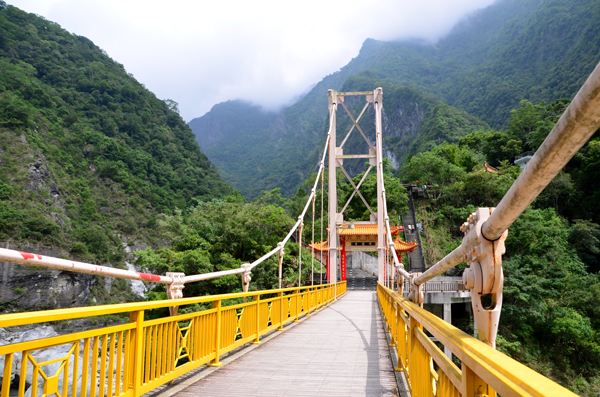 One of those shrines is the Changchun Eternal Spring Shrine, a beautiful memorial over a waterfall built to commemorate the 226 men who sadly lost their lives during the building of the highway. 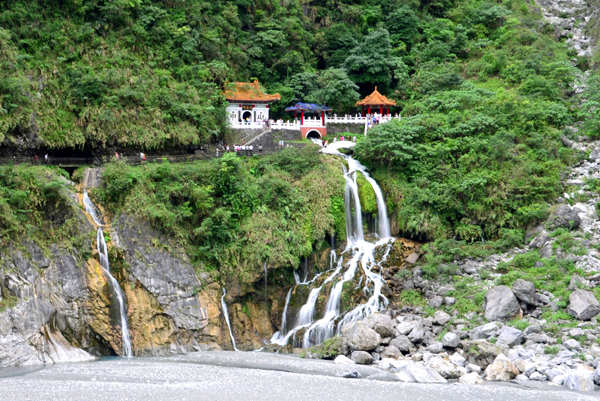 As we continue into the canyon each turn of the road, and there are many,  reveals yet another stunning surprise that has my jaw dropping further and further until it’s practically scraping the canyon floor. 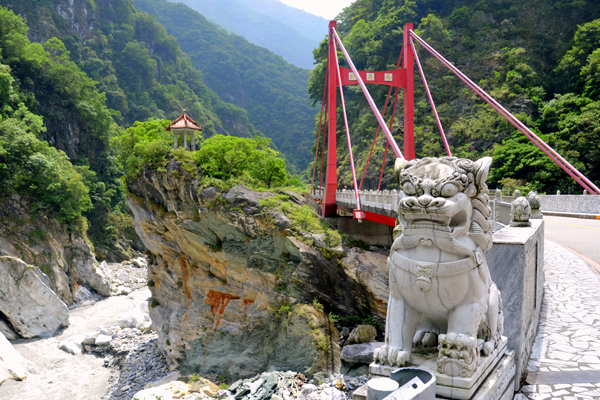 The name Taroko means magnificent in the language of the indigenous Truku tribe who reside in the area, and it is most definitely as advertised. 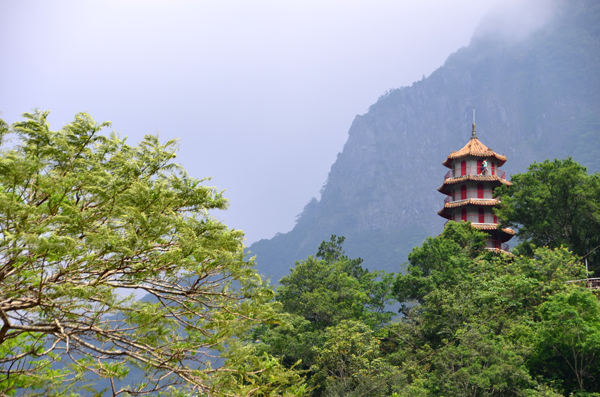 The National Park surrounding the gorge is also home to an astounding variety of wildlife including this fluffy and freakish bug who I grew quite fond of. 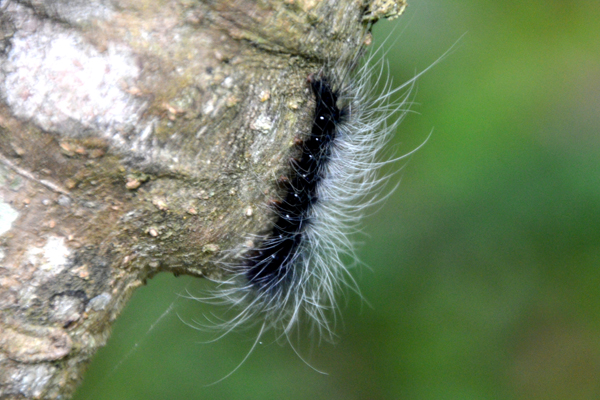 You may also find black bear, macaque, and some rather nasty looking wild boar. Luckily the only one of those we ran into was served as succulent ribs with wild native ferns at the indigenous Leader Village Taroko Resort – the perfect spot to suck up a little of Taroko’s magnificent serenity while we gorge ourselves, if you’ll pardon the pun, on lunch. 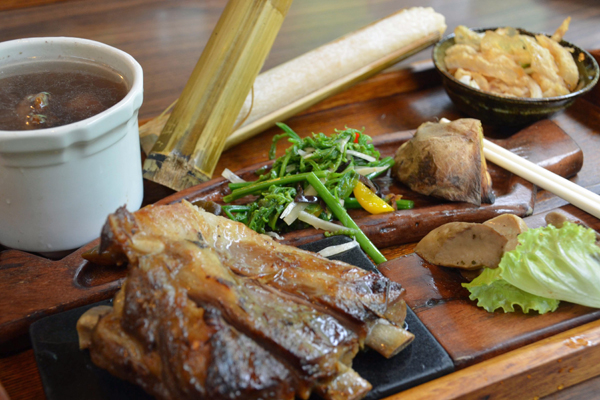 12 Comments on Gorging in Taroko, Taiwan