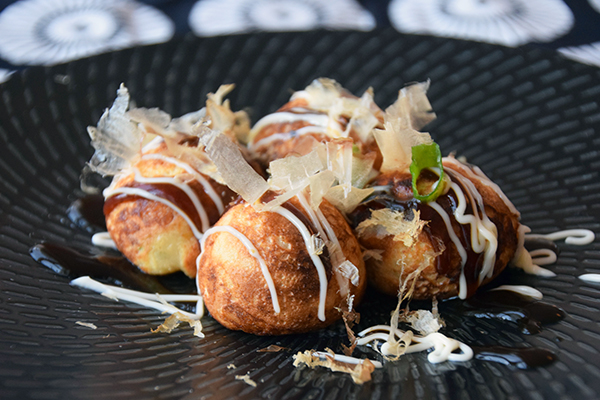 I’ve written previously about our unhealthy obsession with hot steamy balls. Octopus balls that is. Before you get excited, I’m not talking about the gonads of an octopus (which, incidentally, are located in their heads… should you ever happen to be looking), I’m talking takoyaki, those dangerously addictive spheres of flour, eggs and dashi, studded with octopus pieces, ginger and green onion. Just writing about those golden balls of goodness gets me all flushed and overcome. Though that could also be the effects of early onset menopause.

Crisp on the outside and exploding with creamy goodness on the inside, Takoyaki are another Osakan speciality, though readily available across the whole of Japan. You can find them in Japanese restaurants in Australia, while in Japan they’re more likely to be found in street stalls, where you can watch the pros powering through the production of rows and rows of the magical little puffs of fried perfection. Admittedly though, due to their irresistible allure and the speed at which they produce and serve them streetside, nine times out of ten you’ll also get second-degree burns while eating them. Because who can wait for the little buggers to cool down?

The kids, after visiting Osaka’s Wizarding World of Harry Potter, now insist on calling the little golden balls “Japanese Golden Snitches” and have been begging me to make some since we got back from Japan. So, obedient kitchen witch that I am, I got my hands on a Takoyaki pan and whipped up a magic potion that, by some strange coincidence, looked exactly like batter! And then proceeded to do exactly as I was bid by whipping up some actual Golden Snitches complete with crispy pancake wings for the kids to devour alongside a bigger batch served the more traditional way topped with sauces and dancing bonito flakes. 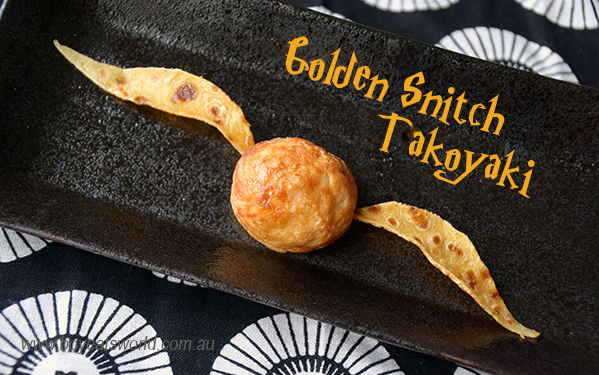 And while making Takoyaki proved a little easier than I expected, turning out a perfectly spherical ball had me ready to apply for a job with Heston Blumenthal, so great was my feeling of achievement!

Note: Takoyaki Pans are readily available online and in larger Japanese grocery stores at a very reasonable price. Rumour has it that the base of a cake pop maker can also be used as a substitute (though I can’t personally vouch for this). 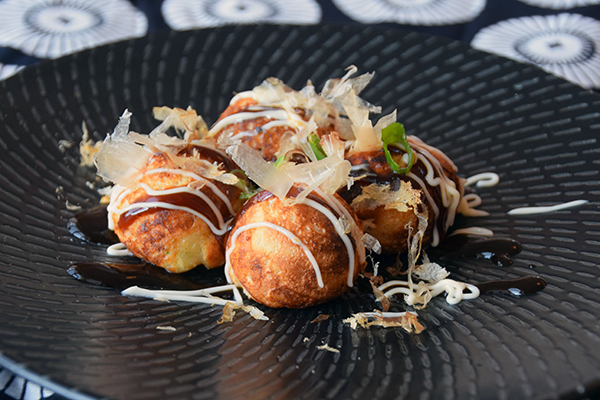 Method:
1. To make the batter, combine flour, cornflour, eggs, soy, salt and dashi stock to a thin, watery consistency, which is the secret to a good sphere!
2. Place a lightly oiled takoyaki pan on a medium heat.
3. Pour the batter to fill the holes to around the ¾ mark.
4. Drop a piece of boiled-octopus plus a sprinkle of ginger and spring onion into each hole then top up the hole with more of the batter mixture.
5. Once the bottom of the balls are cooked, gently start to turn each using a couple of skewers so that the liquid inside batter can flow out to create the other side of the ball.
6. Move the balls around fairly frequently for around eight minutes or until a crisp sphere forms.
7. Remove from pan and serve with lashings of Otafaku sauce, Kewpie Mayonnaise and a smattering of spring onions and dried bonito flakes.

Note: I tried both making the batter with the mix above and using purpose-made takoyaki flour from our local Japanese Grocery store and both tasted exactly like the ones we scoffed by the mouth-burning bucket load in Osaka… though just quietly takoyaki flour makes things much simpler if you can get your hands on it!