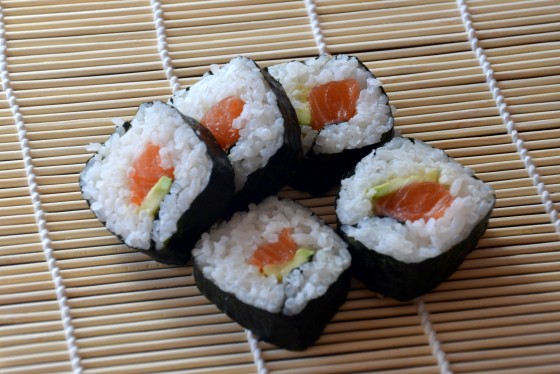 I often wonder if the crazy kids at Casa Conception (the IVF clinic responsible for the existence of both my beautiful babies) didn’t add a drop or two of some random international DNA in the embryonic cocktail shaker. You know, for shits and giggles.

That’s the only explanation I can come up for my four-year old being an oddly obsessive Francophile and for the indefatigable fixation both he and Sugarpuff share for Japanese food.

From sashimi to soba noodles, sushi to soft shell crab, tofu to tokoyaki… just  dish it up and, if it’s of Japanese origin, they’ll demolish it. They can’t get enough of the stuff. So much so that they’re both on a hugs and kisses basis with the folk at our local Japanese and Raffles spends so much time chatting up the lovely chef he’s virtually bilingual. 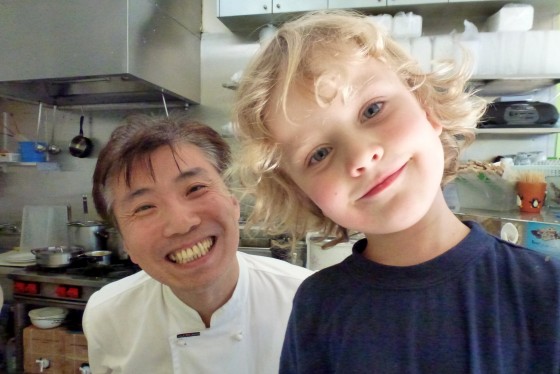 So when we were invited to the home of a friend to “make sushi” Raffles and I were particularly excited. But, no matter how much fun it was to make our own sushi, the thing that particularly tickled my fancy was watching my half British son learn to make the Japanese staple under the tutelage of a French woman in her Australian backyard. The very embodiment of what makes Sydney such a great place to call home. 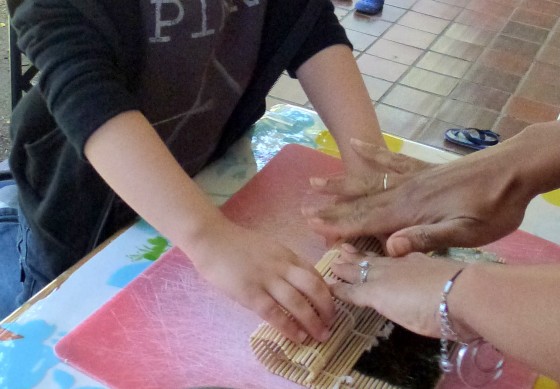 Sushi is a  fun and healthy food for kids to learn to make at home and you can pick up a rolling mat for next to nothing at the local supermarket. And it really isn’t hard. Rolling sushi is one of those things that gets a lot easier with practice.  Since our Japanoise masterclass, we’ve had a few more tries at home and, after a few slightly shambolic early attempts, my four-foot foodie is making rolls like a pro! A slightly haphazard pro, but close enough.

In fact, so cocky is Raffles about his new-found sushi making prowess, he’s taken to giving tips to the aforementioned Sushi chef. Thankfully he’s indulgent of my crazy son, and has promised to take his advice under consideration!