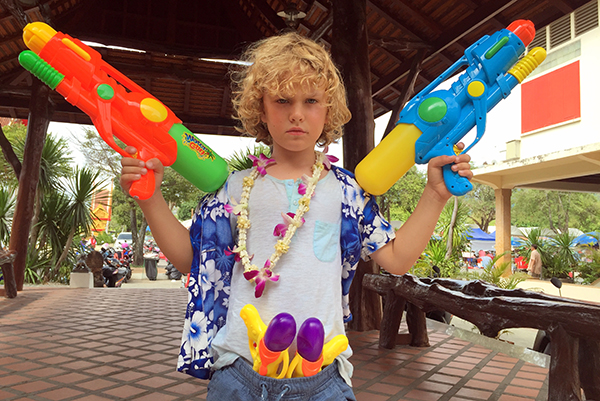 Imagine telling your kids they’re going to attend a 68 million person strong waterfight! Then imagine them stockpiling enough watery weaponry to arm a small country (Insert  the twangy guitars and whistles of ‘The Good, the Bad and the Ugly’ theme music here). Welcome to the wet and wild world of Songkran with kids.

We’re lucky enough to find ourselves in Phuket on April 13th, the start of Thailand’s New Year festival, Songkran (pronounced “Sonk-kraan”), the country’s most important and wettest public holiday. During Songkran, Thailand explodes in a riotous countrywide water battle. Needless to say Raffles and Sugarpuff are champing at the bit to get in on the watery action but before I unleash my excited wee water warriors and their arsenal of weapons, I want them to understand more about the cultural aspects of the auspicious festivities.

You see, what has morphed into a take-no-prisoners water fight comes from far more gentle and spiritual Buddhist beginnings. So we head to Wat Chalong, Phuket’s biggest and most revered temple, to find out more. 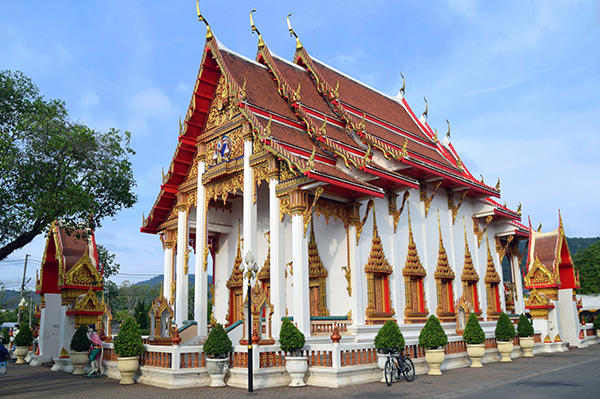 The temple, home to a special Chedi building that is said to hold the finger bone of Buddha, is a very popular stop on the tourist map, so we arrive at around 7am to beat the crowds. 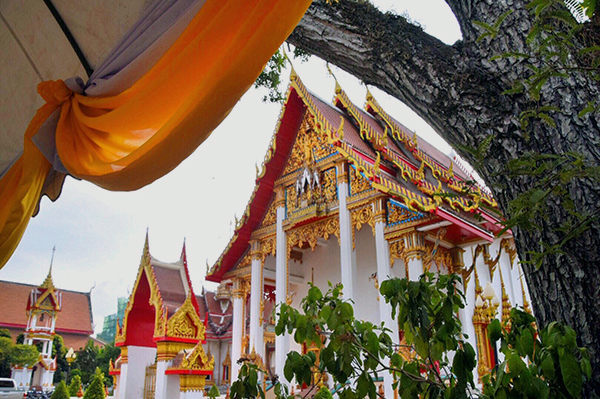 Even at this early hour the place is buzzing with people and the scent of sizzling Thai delicacies wafting from the many food stalls. So naturally we stop for a bite to eat before we get our culture on. 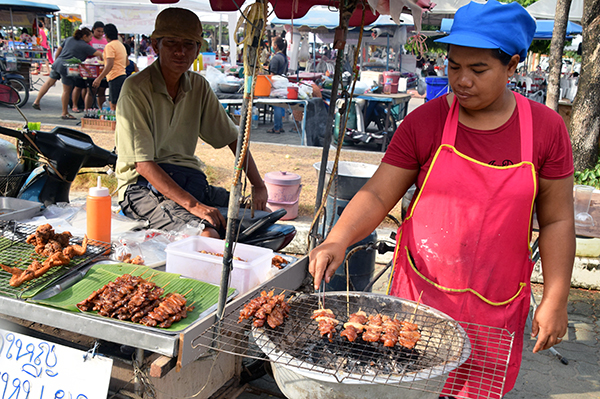 As we explore the ornate complex, we learn that the festival honours an old Thai tradition where young people would gently and respectfully pour water over the hands of their elders to wash away bad luck and bring prosperity for the New Year.

At Wat Chalong’s ornate main temple, Raffles joins the locals to light incense and make a wish while Sugarpuff insists on hanging out with her new pal “Eyebrows”, an unfortunate but friendly stray who appears to have been redecorated with a sharpie. 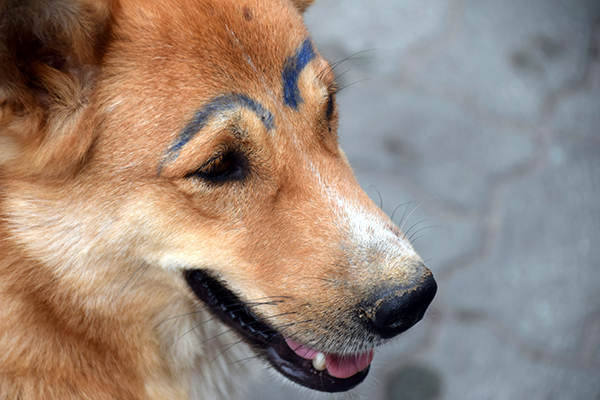 Raffles and his blonde mop prove especially popular with the locals and he happily spends time getting to know a few of them. 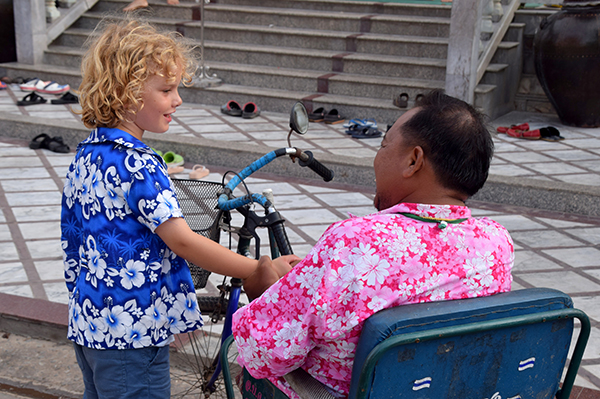 We jump at the sound of fireworks exploding in a special chimney. But it turns out these are to chase any loitering bad spirits away.

Raffles, who has been sipping on his mama’s philosophical cool aid and appears to have converted to Buddhism on the spot, joins the throng of locals who line up to poor petal strewn water over a selection of the temple’s most important Buddha icons.

Then the crowds start to swell as a group of senior monks and local elders form a procession to a long, flower-strewn table. Raffles continues his pilgrimage and pours the fragrant water into the outstretched hands of each of the monks and elders in exchange for blessings… the unexpected sight of a curly blonde boy resulting in smitten smiles and a few extra blessings. Indeed he has so much prosperity bestowed upon him, I’m tempted to rub him for luck. 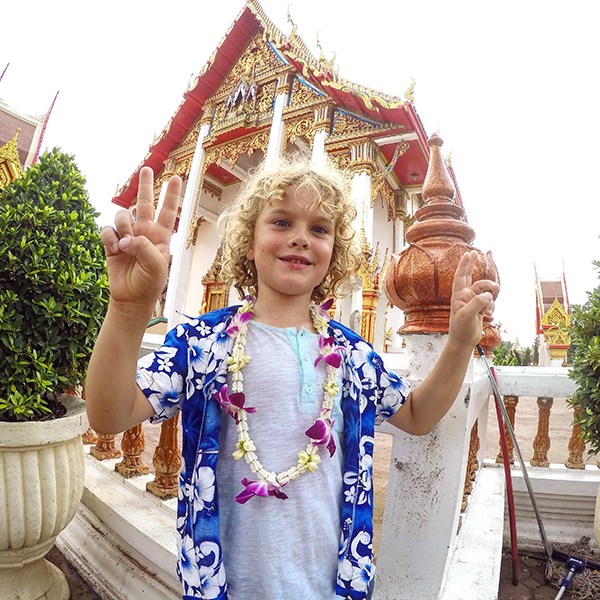 Meanwhile a beaming Sugarpuff is charming the pants of a crowd of local ladies who are queuing up for photos and cuddles with my curly-haired cutie and I’m dragged off to dance with a group of boisterous fellow festival-goers and musicians. 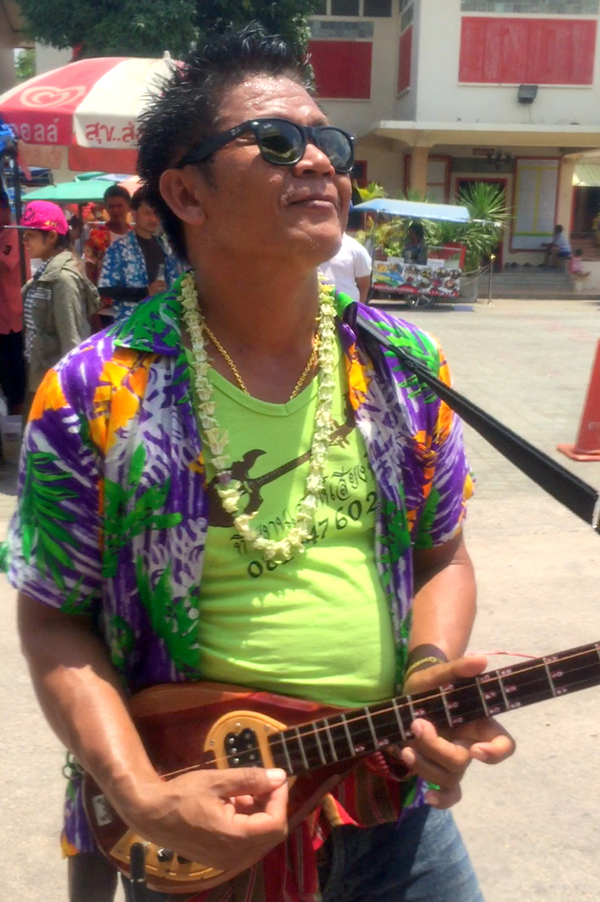 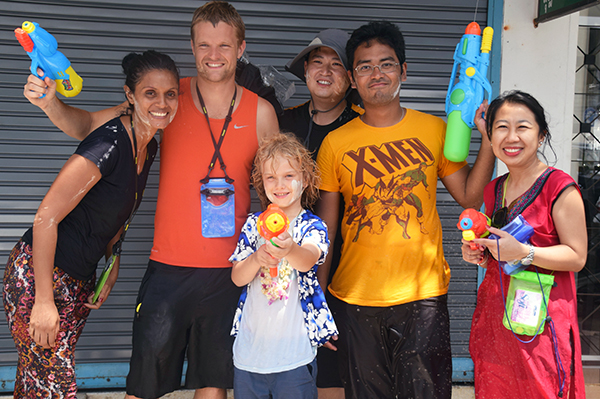 And then it’s on. The first shots are fired before we leave the temple and the giggling kids are soon looking like a pair of drowned rats, as does their unarmed mother. 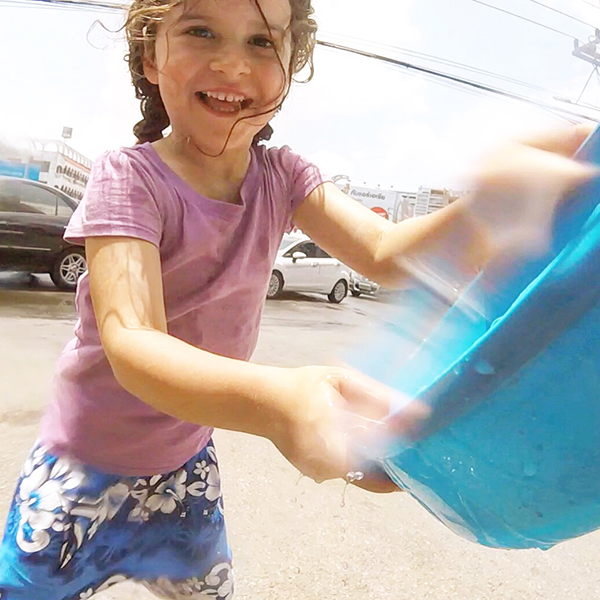 Everyone, except the orange-robed monks and elders, appears to be a target.

As much as we’re having in the temple grounds, we’ve decided to move on because we’re after a bit of frontline action. Vetoing the tourist packed beaches and not-so-kid-friendly antics of Patong, we head to Phuket Old Town to celebrate Songkran Thai style. 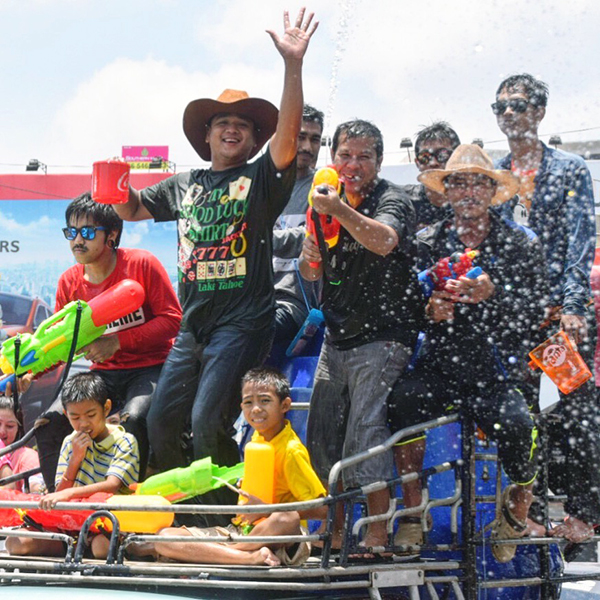 We pack away our cameras, and seal up anything that we don’t want to get damp in waterproof bags because it’s pretty clear we’re going to get wet! Very wet. 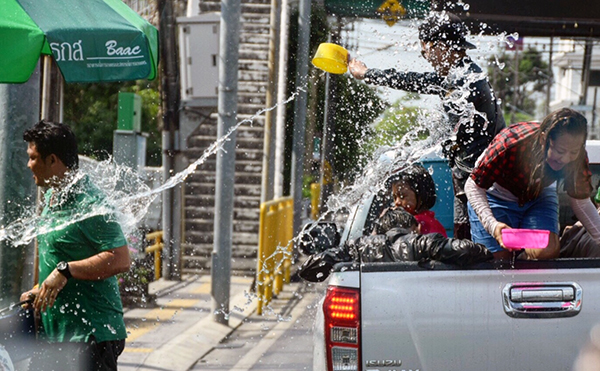 Indeed, it is on for young and old when we arrive. The streets have been transformed into a wet and wild battleground and streams of water liberally shoot through the air. 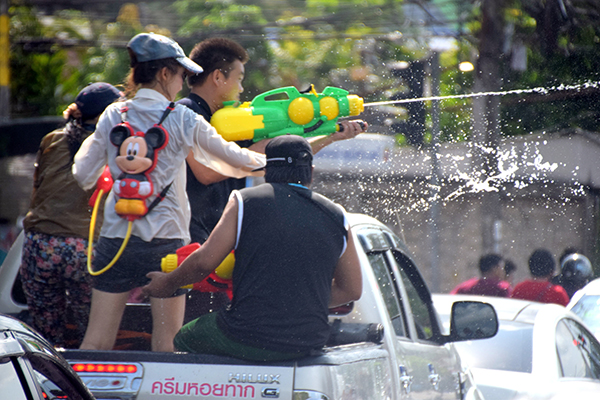 No one is safe! Buckets of water douse passing motorcycle riders and utes packed with locals and their enormous barrels of iced water indiscriminately drench passers by. Including us. 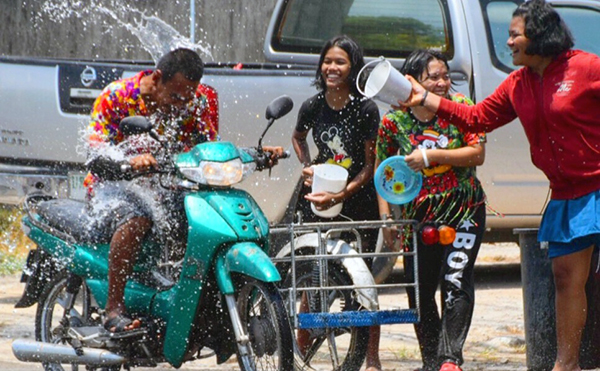 The ice water proves a bit much for Sugarpuff who uses me as a human shield but my sodden son is dancing along the street whooping and hollering with glee as he fires at anything that moves. It is at this point it occurs to me that my days of carefully ensuring that our water consumption has been only from bottles has been a complete waste of time. Raffles is consuming litres of the extremely substandard stuff as he studiously ignores my instructions to keep his trap firmly shut during the Songkran shenanigans. 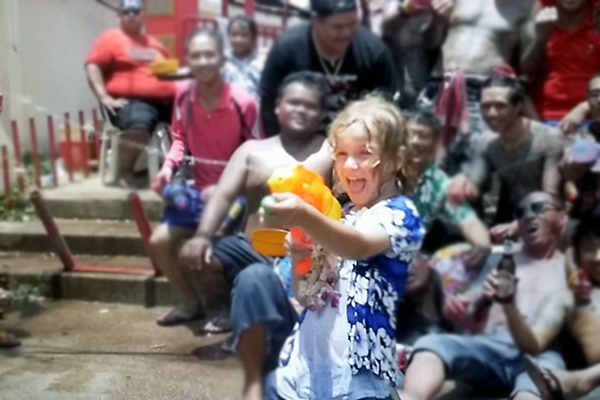 I guess we’ll just have to count on the effectiveness of all those blessings to keep him from getting sick. A little additional spiritual insurance comes too from the local Thai people who stop to apply a pasty powder to our faces and necks as a sign of protection and to ward off evil.

I can only hope it is also effective on bacteria!

Songkran is just one of Thailand’s countless festivals and events, and one of many intriguingly colourful and cultural  festivals around the world. From celebrating Chinese New Year in China and the Cherry Blossom Festival in Japan (which we keep missing by mere weeks) to joining the epically messy food fight that is La Tomatina in Spain (that’s top of Raffles festival wish list) we’re planning on introducing our culture seeking crew to them all?

Does your family have a favourite cultural festival?