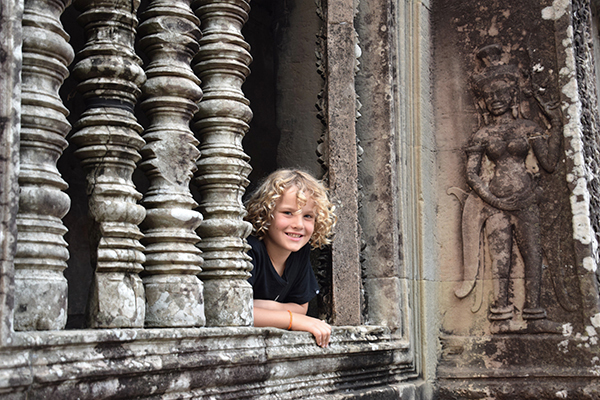 The temples of Angkor were the main reason I wanted to visit Cambodia, especially after Mum let me watch Tomb Raider. But even Lara Croft, though she’s utterly awesome, didn’t prepare me for just how epic the temples of Siem Reap really are.

There are hundreds of ancient ruins all over Cambodia, but the most famous of them are located in Angkor Archeological Park in Siem Reap. There are so many that they are still uncovering some and that makes me want to be an archaeologist. Well kind of, it sounds like a cool job but it might take up too much good eating time.

When I finally got to see them in real life on our holiday in Siem Reap, I had to pick my jaw up off the ground at just about every single one on our real life Temple Run. And I loved them all but for very different reasons. Here are my tips for visiting the best Siem Reap temples with kids. 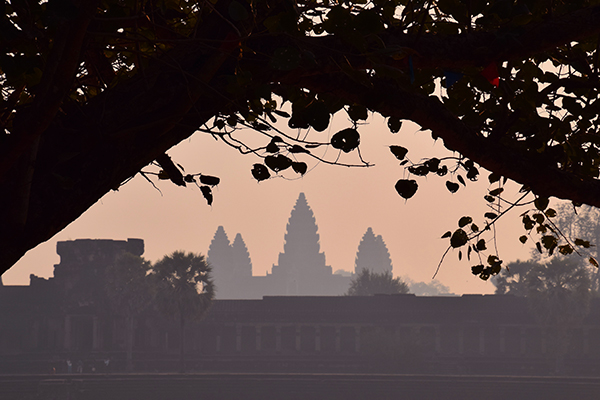 Angkor Wat was the first temple we saw, at stupid o’clock in the morning. I wasn’t convinced by mum’s idea to get up at like 4 o’clock in the morning but it was so cool to drive through the dark in a Tuk Tuk and when the sun rose I couldn’t believe my eyes. It was like something out of a movie. I hate it that she’s always right. 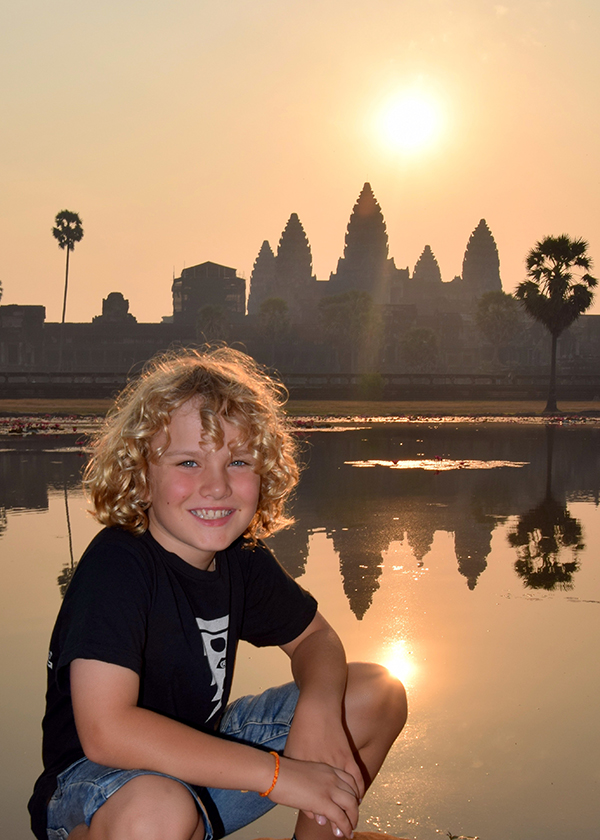 We walked past a lake covered in lilies that were opening up as we went by – thanks to Mother Nature’s wizardry. Inside the temple, monks were offering blessings and we had cool red bracelets given to us that we have to wear until they fall off for luck. 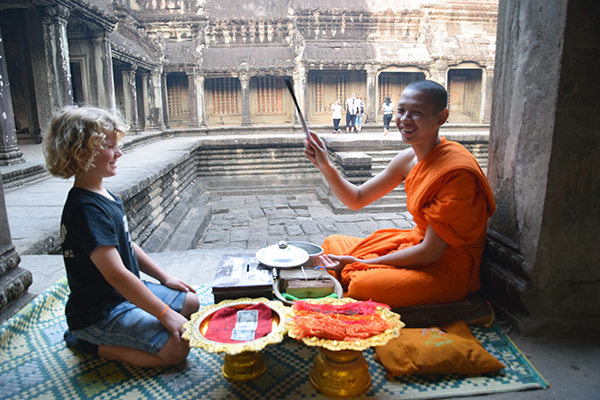 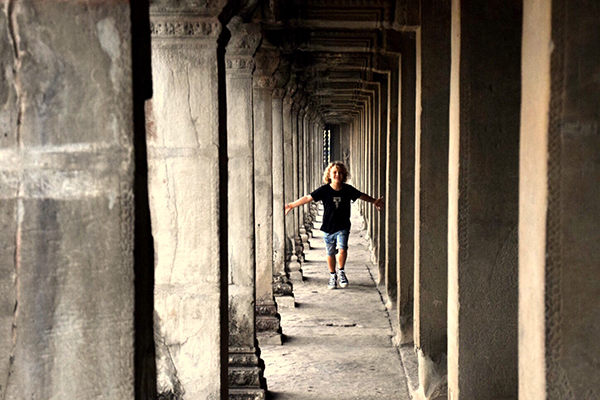 There were carvings of Hindu heavens and hells, epic battles, elephants and turtles, and gods like Vishnu and Ravana, who was the king of the giants and had like 20 heads and a gazillion arms. I reckon that dude was a bit greedy in the limb department. And of course, there was my favourite Hindu God who I’ve read about in the Ramayana, Hanuman, and his army of awesome magic monkeys. 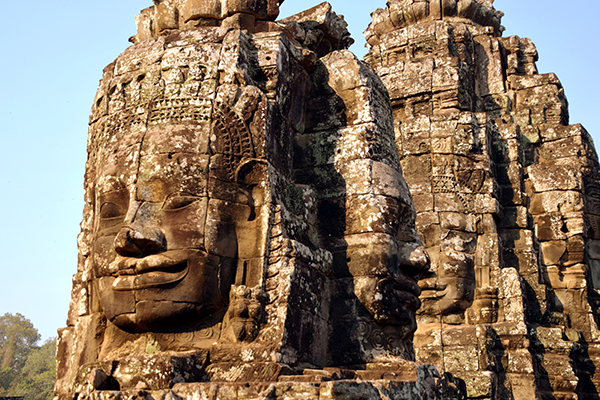 We had to ride a Tuk Tuk across this epic bridge lined with statues of demons and gods to get to Angkor and The Bayon. I could have stayed on it checking out the statues’ faces all day, because every single one was different and kind of gruesome. I like that in a statue. 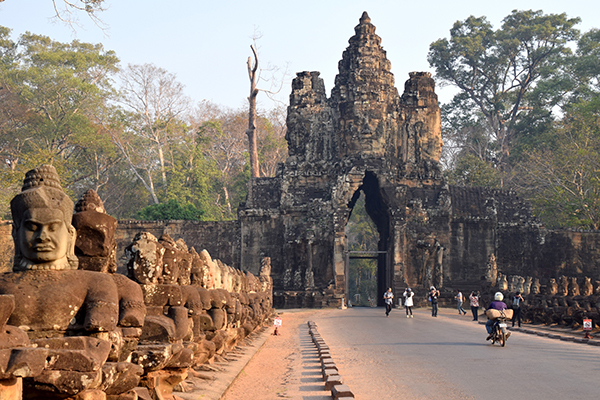 I did find it a bit upsetting though because there were loads of stupid tourists riding elephants across the bridge and through the gates like they were kings. The evil King of the Ding Dongs maybe? Because you’d have to be pretty mean and pretty dumb to think it is ever OK to ride an elephant like that. Anyway, after I gave them all the evil eye and shouted at them, we reached the Bayon and it blew my actual mind. 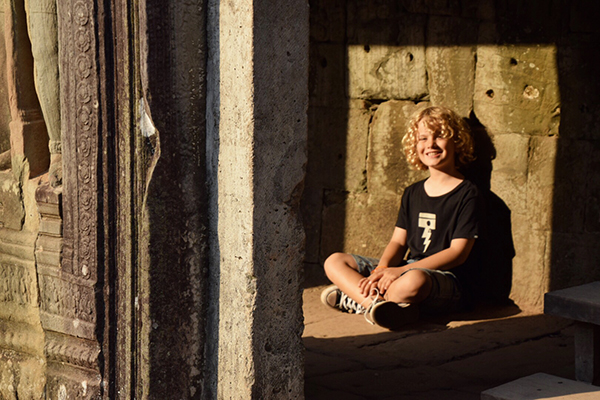 OMG! This place is off the charts crazy. There are like 200 giant faces on these huge towers and they were AWESOME. Apparently, they are all the face of some king who really liked himself a lot. Probs would have been easier for the people who had to actually build it to just get the guy a mirror but hey, it’s pretty cool. 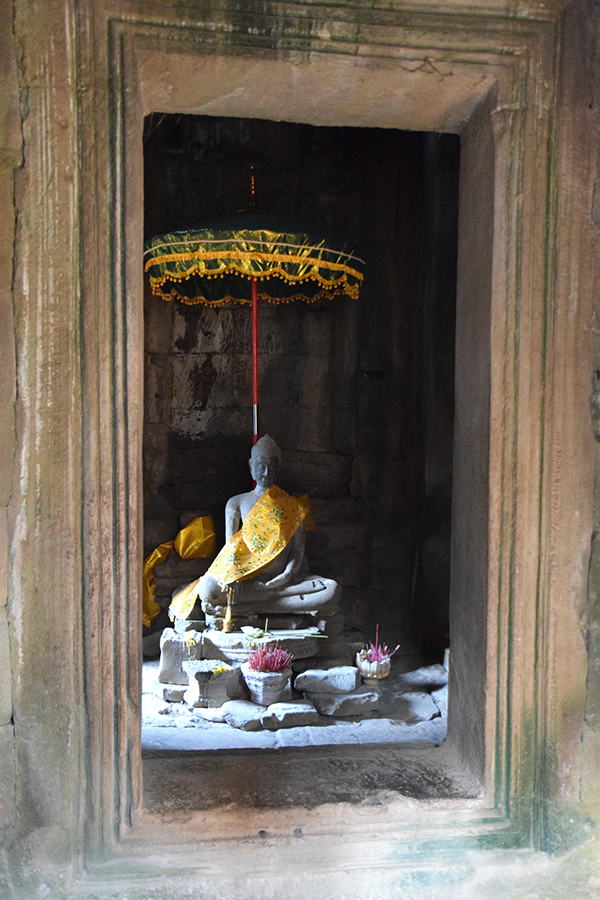 The best thing about this place is that it was like a labyrinth with little hallways and corridors heading off in different directions. 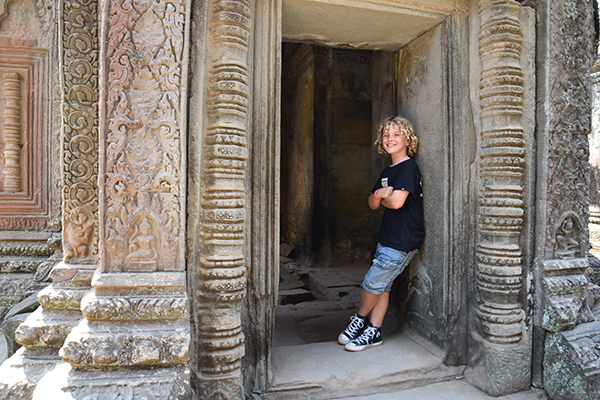 And tunnels and stairs and columns that kept appearing as if from nowhere. There is so much detail it’s amazing. 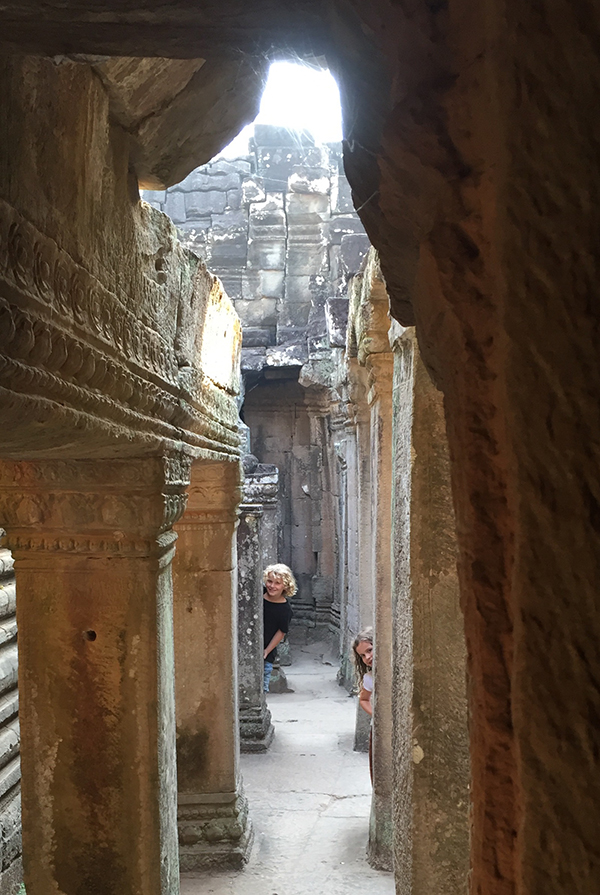 My sister and I played hide and seek and loved scaring the pants of my dad by appearing and disappearing out of different doors like magic. 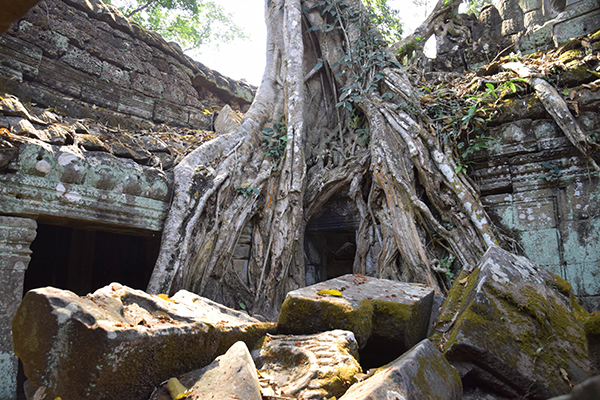 Ta Prohm is the reason I nagged my family into coming to Siem Reap in the first place, because they foolishly allowed me to watch Tomb Raider, which was filmed here, and I am nothing if not determined when I get an idea in my head.

It was even better in real life than in the movie. 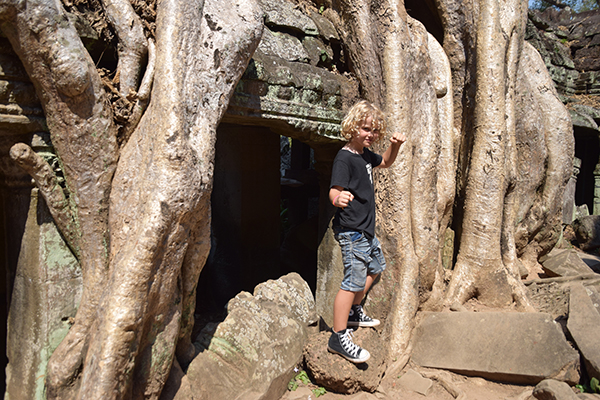 Ta Prohm was quite different to most of the other temples in Siem Reap because it hadn’t been restored and I was amazed by the size of the thick ancient vines that had wrapped themselves around the temple, leaving it in ruin. Some of them were bigger than me. 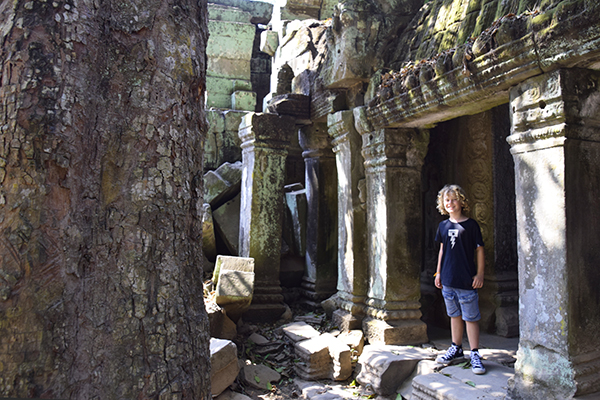 I recognised parts of it from the movie, so of course had to get my Larry Croft on (I think that’s Lara’s brother… at least it is now). I leapt and rolled over the ruins and was amazed at the  sight of nature and architecture battling it out. 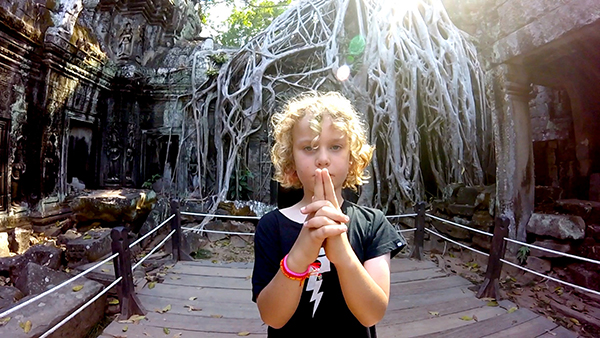 The only downfall of Ta Prohm is how popular it is. Some parts of the temple had been roped off to protect them (which is a good thing) but it was so crowded in places that you could barely move. (Timed tickets for entry to Ta Prohm would be a good idea to control the crowds, because this place is really fragile and very special and needs looking after). 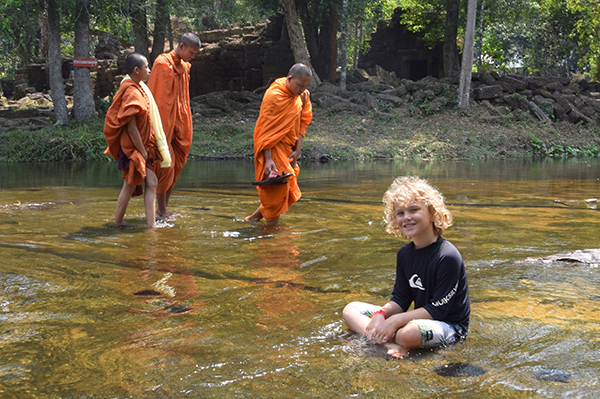 At Phnom Kulen (about an hour outside of Siem Reap in the mountains), was the temple of Wat Preah Ang Thom, where there is an enormous reclining Buddha and loads and loads of monks. 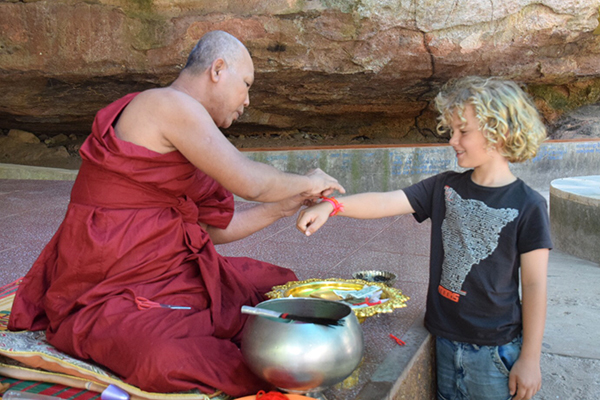 Some of the monks had really cool tattoos. They are sacred yak sant tattoos, which are said to offer protection. I reckon they look pretty epic, although a bit like they drew on themselves with a sharpie. 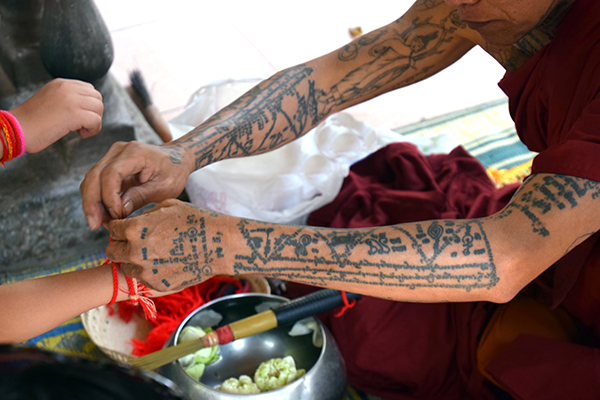 It is also home to the River of a Thousand Linga, which made me giggle because Linga are kind of like god penises. But I really shouldn’t joke about them because it is a very sacred place. But… penis. Hehe.

There were also some other temple ruins running beside a river with a cool waterfall which was the reason I chose to come to this place, as Tomb Raider was also filmed here. But unlike Lara Croft, I didn’t jump off the top of the waterfall because you know, I don’t actually want to die and I don’t have a stunt double. 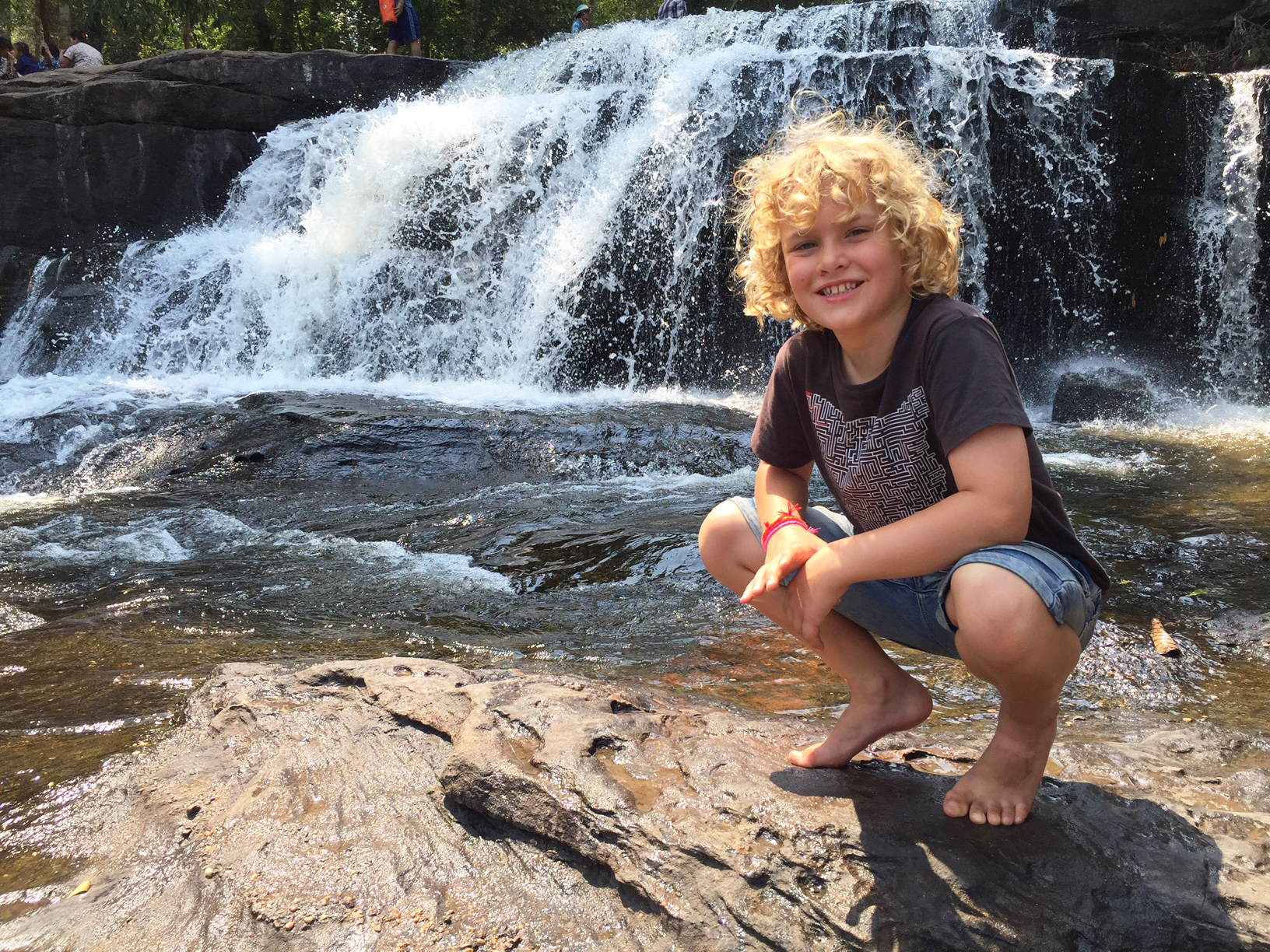 There were heaps of monks making their way across the river to the waterfall. This made it extra awesome because I have a thing for Buddhist monks. They’re so peaceful and mysterious and I love their chants, which make me feel so happy. 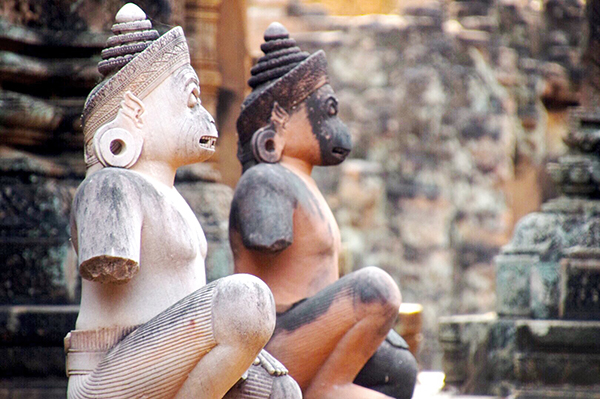 On the way back to town, mum decided one more temple couldn’t hurt, and we stopped at Bantey Srei, which means the Citadel of the Women. It is dedicated to the Hindu god Shiva, who I reckon was a bit of a dude. 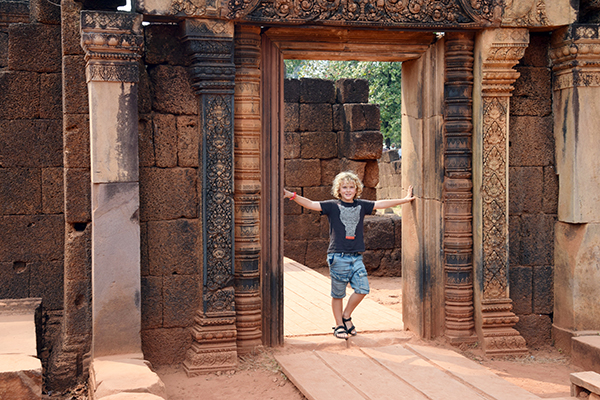 I’m so glad we stopped here, not only because we got to slurp up a delicious fish amok at a local café, but because the temple was so amazing. It is older than Angkor and much smaller and prettier. 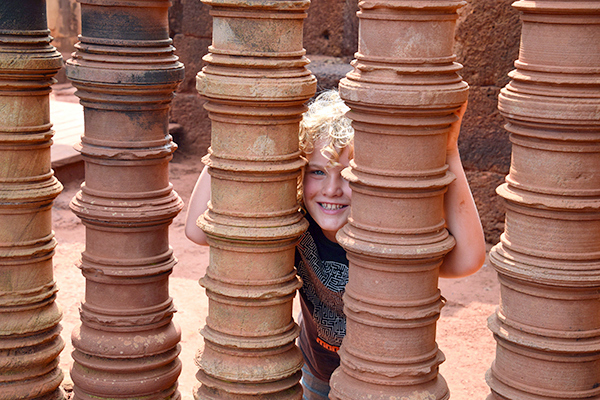 The whole temple is like an ancient art gallery and every single inch of it is covered with relief carvings of dancing apsaras. The place is guarded by statues of Hanuman and his kick-arse monkey warriors – sorry mama for the swear word but these guys are hard as. 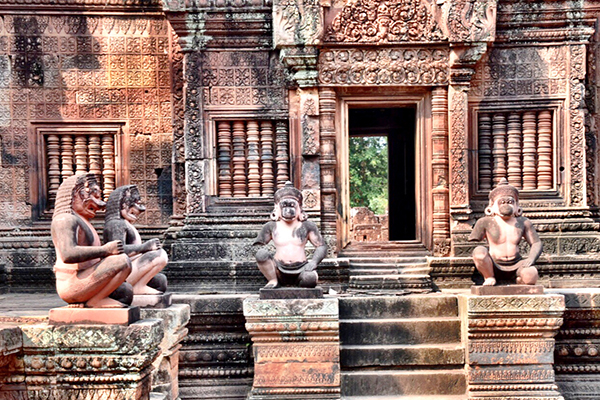 If you’re wondering if its family friendly, I say parents should totally visit Siem Reap with kids. Even though our few days in Siem Reap saw us visit quite a few temples, to be honest we barely scratched the surface and not only do I want to revisit every single one of them (preferably early in the morning before the crowds descend) but there are said to be more than a thousand others, ranging in size from little piles of rubble to epic towers, and I want to explore every single one of them. I better get cracking, eh?

You can find more need to know tips on visiting Cambodia with kids here.

Written by Raffles – Aged 9
(Bracketed comments by his mama)

12 Comments on The best Siem Reap temples with kids