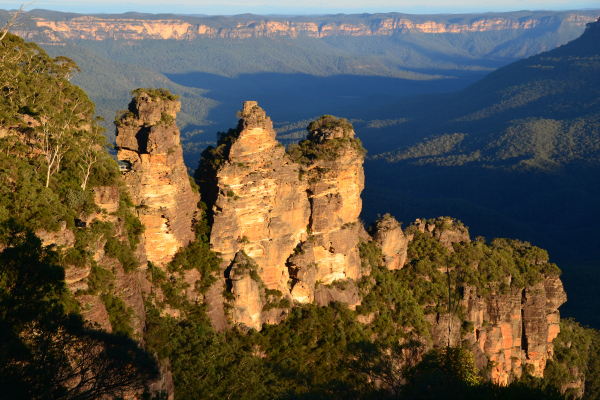 No one could ever accuse my children of being unimaginative… peculiar, overly dramatic and eccentric most definitely, but not without creative flair. Especially when we travel as anything new seems to come with a bizarre bonus fictional narrative from both Raffles and Sugarpuff. Which is how we find ourselves descending into a thick fog of smoke created by a posse of fire-breathing dragons who are waiting to greet us in the Jurassic depths of an invisible valley.

In reality we’re at Scenic World in the Blue Mountains on the Scenic Cableway, the steepest and largest cableway in the Southern Hemisphere, and while usually the floor-to-ceiling windows would reveal spectacular Jamison Valley, today our view is of nothing but a heavy mist that has shrouded the mountains. 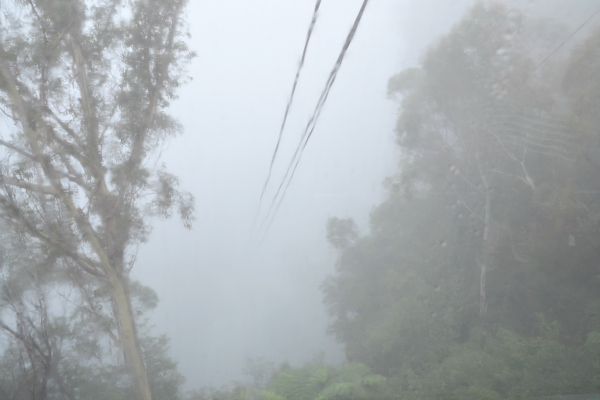 Mind you, I’ll still be keeping my eyes out for sulphur-breathed flying reptiles just in case the kids know something that I don’t.

While the rainforest floor proves to be entirely free of dragons, there are instead many, many bats dangling from the vines.

“Are they Vampires?” asks Raffles. Not unless vampires are made of flyscreen, baby. The bevy of suspended flyscreen beauties are just one of the many fabulous art installations transforming Scenic World’s 2.4 kilometre rainforest walk into an outdoor art gallery until May10th.

Though the kids are a tad disappointed not to bump into any of their fire-breathing friends, they are soon distracted by the amazing artworks hidden amongst the trees, from the stretched weirdness of styrofoam and stockings that is Intervention Invading Network to the dangling white cube that is Poriferous. 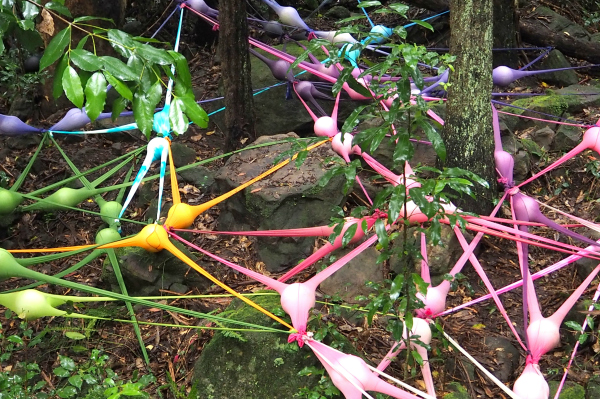 They’re particularly enamoured with an army of tiny plastic trucks and bulldozers that are crawling insect-like up and into the trees in an installation called Colonised. 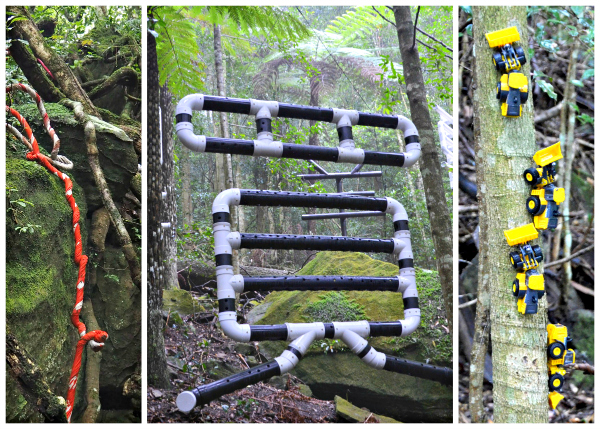 Raffles is fascinated by the old coal mines in the valley and after coating himself liberally in coaldust, joins us aboard the Scenic Railway, the steepest passenger railway in the world. Travelling at a 52° incline, the kids decide to go full “cliffhanger” and tilt our seat to an even steeper 64°incline for the ride up through a cliff-side tunnel, where their claustrophobic mama holds her breath and rocks back and forth in a panic for what seems like an hour but is actually about 7 seconds.

I’m far happier boarding the Scenic Skyway, suspended though it is in mist hundreds of metres above the rainforest canopy. 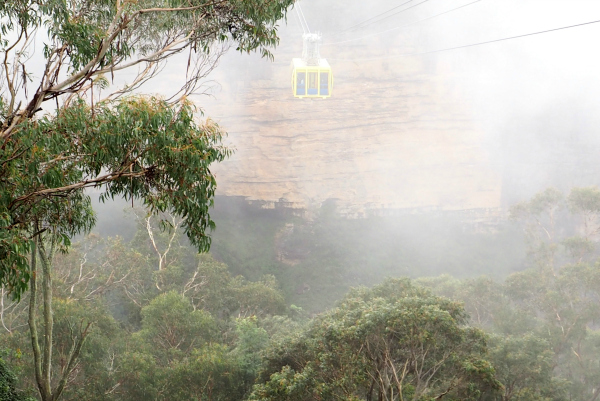 We’re about midway when the sun suddenly burns away the remaining mist to reveal the Three Sisters and Jamison Valley in all their glory. Wow! 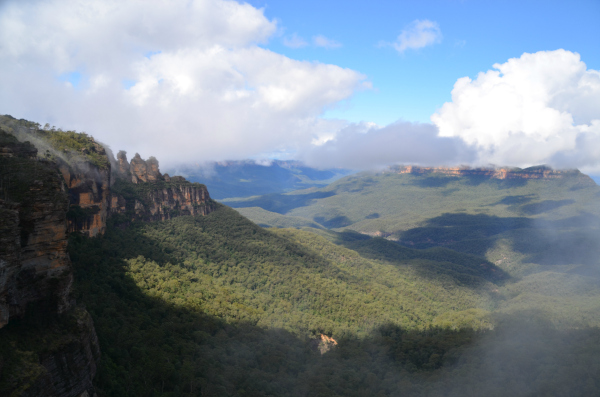 Once on the other side we follow a sign to Katoomba Cascades, but I stop once we spy the deep puddles of mud blocking our way. Before we can stop him, Raffles leaps onto the muddy pathway, leaving me no choice but to follow while his far more sensible father and Sugarpuff wave us on our way. 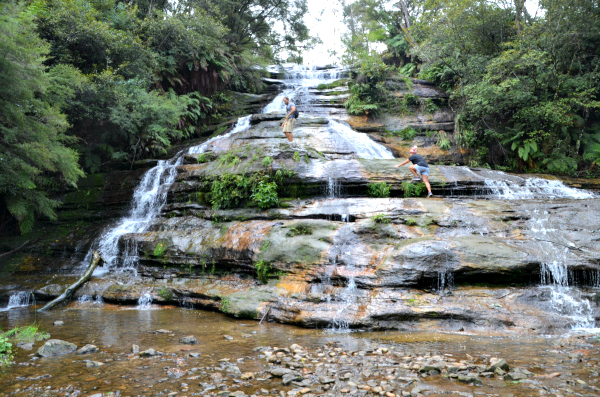 The stunning falls prove to be worth the muddy mission but after Raffles also decides he’s going to climb the waterfall itself, he is soon saturated as well as coated in mud. Bugger. 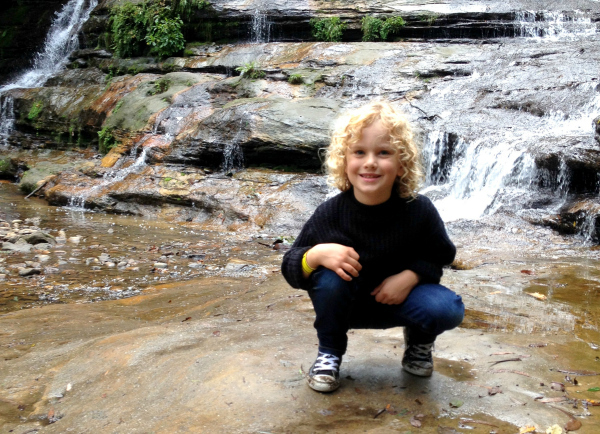 Good job our hotel, the Waldorf Leura Gardens B&B Resort and its guest laundry facilities are nearby. While we wait for our clothes to dry, we explore the resort’s four and a half acres of pretty landscaped gardens overlooking the fairway of Leura Golf Course. 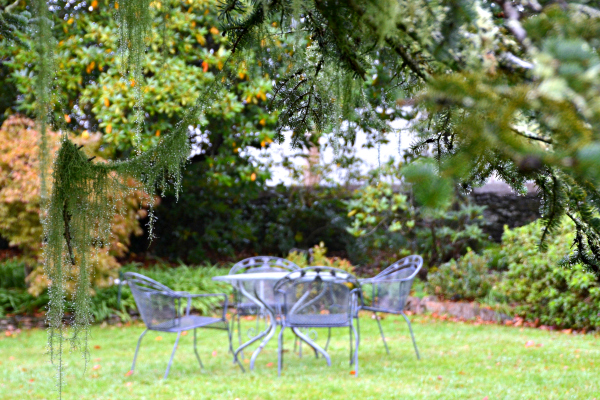 And make a mental note of the table tennis and billiards rooms. That’s our evening taken care of… But before we get our ping pong on we’ve got an important mission in Leura. 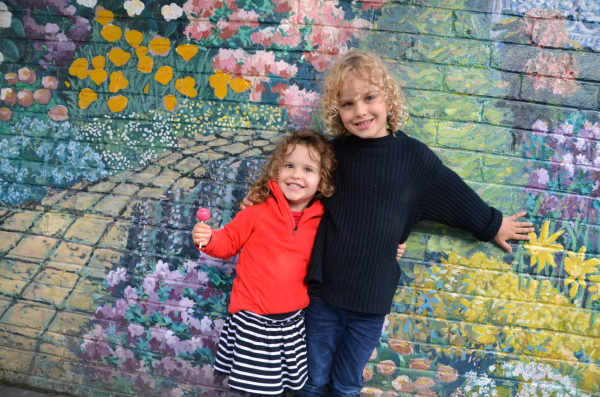 And that is to raid The Candy Store, a place so heaving with lollies, chocolates, fudges, nougats and other sugary sweets from around the world that Sugarpuff almost explodes from excitement… as does her dad when he spies the English candies of his childhood. 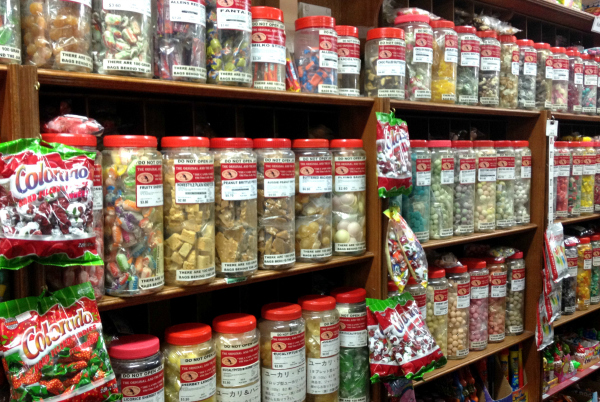 Stocked up on sugar, the kids hang around while we grab a coffee to wash down our haul. 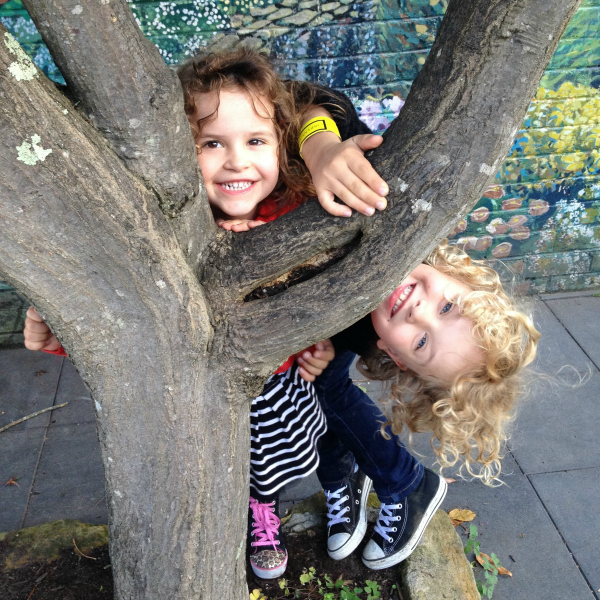 We’ve still a little afternoon left so we decide to head about half an hour out of Leura to The Norman Lindsay Gallery to introduce the kids to a sweet of the magic variety. The gallery and former home of artist, writer and raconteur, Norman Lindsay is also the home of The Magic Pudding and one of Mr Eats World and my favourite spots in the mountains.

Demonstrating yet again that they are a pair of weirdos, the kids are far more interested in Lindsay’s once controversial nudes than the giant pud of their storybooks. 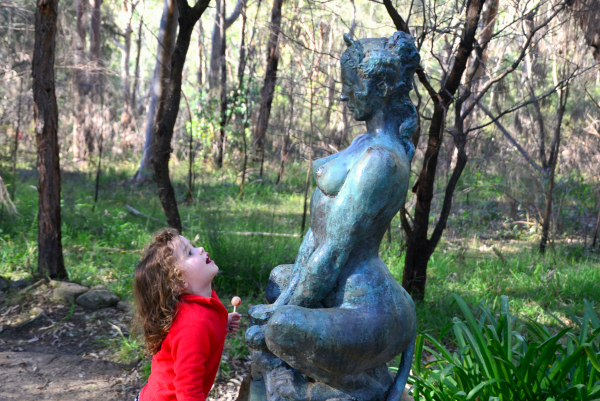 Once again our eccentric offspring’s imaginations are fired up by the images of mythological creatures and they’re off slaying imaginary winged monsters among the sculptured sphinx, satyr and sirens that live in the beautiful gardens.

We attempt a little education but Raffles is less interested in the riddle of the Sphinx than he is in its “boobies” and the moment is lost, as is the opportunity for us to actually capture a single decent family portrait without him copping a feel. Norman would be proud. 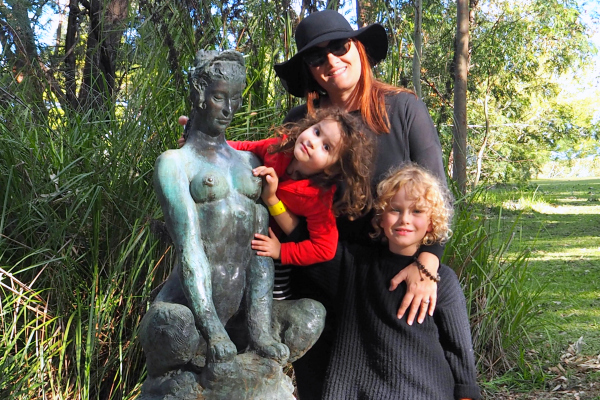 We head back to Katoomba to bathe in the golden light of sunset at Echo Point and a curry at Three Sisters Spice where I face plant into one of the best dhals I’ve ever had, Raffles and his dad inhale byriani and butter chicken and Sugarpuff takes on a pile of pappadums. 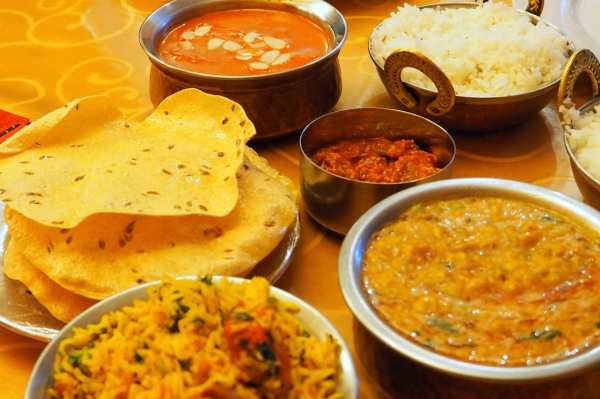 It’s still early so we head back to our hotel for a game or ten of ping pong… and that’s where things start to unravel. There are giggles, there’s competition, there’s Raffles playing like a boy possessed, and there’s me calling an end to the night’s festivities as it reaches bedtime and I hear the call of our warm and comfy family suite. 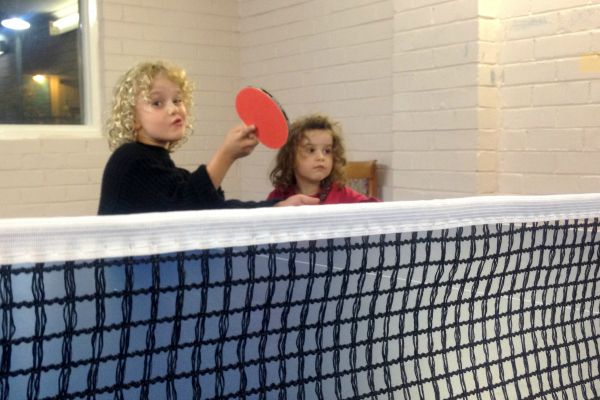 Foolishly I agree to one last game and as he dives across the room to fetch a low flying ping pong ball, Raffles somehow ends up somersaulting headfirst into the door in a burst of truly spectacular clumsiness.

Then the screaming starts. First it’s only him. Then when he proffers his blood stained hands to me, I join in. When he lifts his head, which immediately becomes clear is the source of all that blood, his sister and father join in and people come running! You know that thing they say about head wounds bleeding a lot? It’s true. This is like a scene out of a b-grade horror flick…

The staff at the hotel are simply amazing and help us to clean up and calm our frightened boy, who it seems is going to need a couple of stitches… and so instead of enjoying a cosy night in our comfy suite we spend it in the casualty ward of the Blue Mountains hospital where Raffles is put back together and kept in for observation.

Our busted boy repaired nicely, we head off with a warning that he shouldn’t take alcohol or drugs in the next 24 hours… Seriously? He’s seven. What do they think we’re gonna do – crack him open a bottle of tequila and hand him a bong? 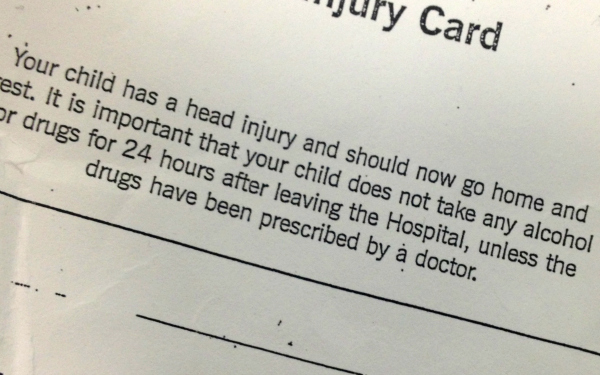 Besides the disturbing handout, the doctors and nurses at the local hospital are awesome, but personally I’d advise that if you’re planning on a weekend in the Blue Mountains, which you absolutely should, there are better places to stay than in its casualty ward… like The Waldorf, a place of which I can’t speak highly enough…

Oh, and avoid ping pong death matches at all costs.

18 Comments on Art attack on a Blue Mountains family break