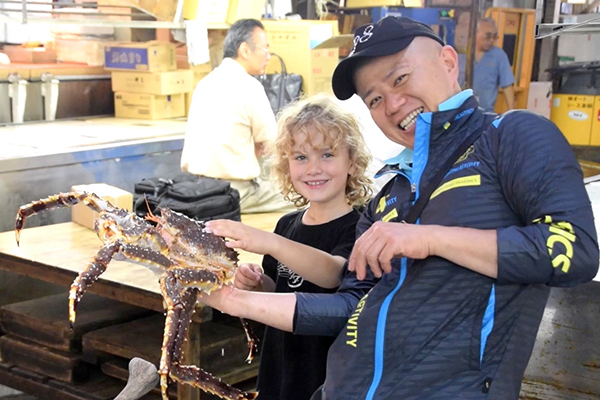 *Note: The wholesale market of Tsukiji Market has now moved to a new site in Toyosu, Tokyo

This is a bit long because I need to review two of the most amazing places I’ve ever been to, Tsukiji Market and Sushi Kokoro, because without one I would never have gone to the other.

I was so, so lucky that I got to go to the biggest fish market in the world with chef Tsutomu Oba to buy his fish. Chef Oba isn’t just any chef, he’s really nice and funny and used to be the chef at Kyubey (one of the top Sushi restaurants in Tokyo) until he opened Sushi Kokoro.

Mama told me I couldn’t go with her to Tsujiki because it’s too busy and dangerous but when Chef Oba promised he’d help look after me, she gave in. I’m so, so glad she did because visiting Tsujiki was one of the most epic things I’ve EVER done. 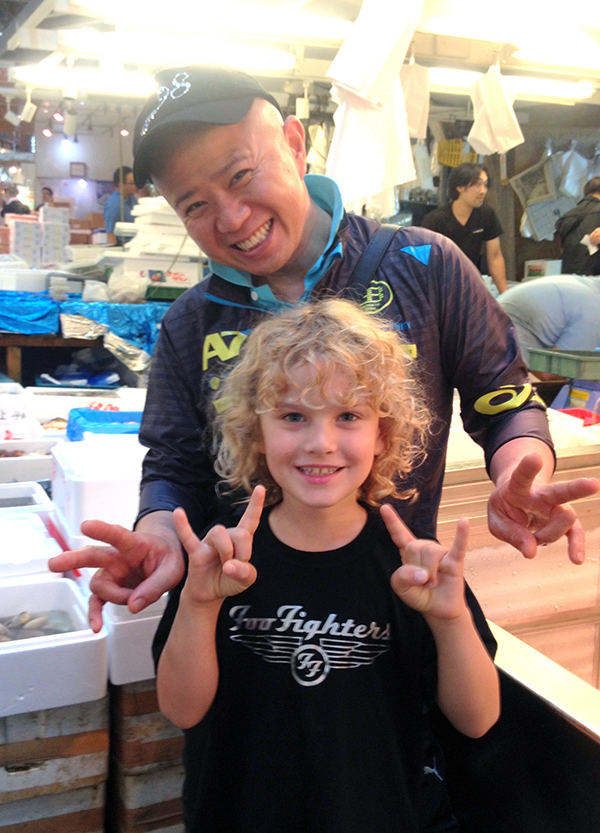 Once we arrived I saw why mama was worried because it would have been scary without Chef Oba! It was like a giant fish city. And really crowded with trucks speeding all over the place. It was crazy. And I LOVED it. 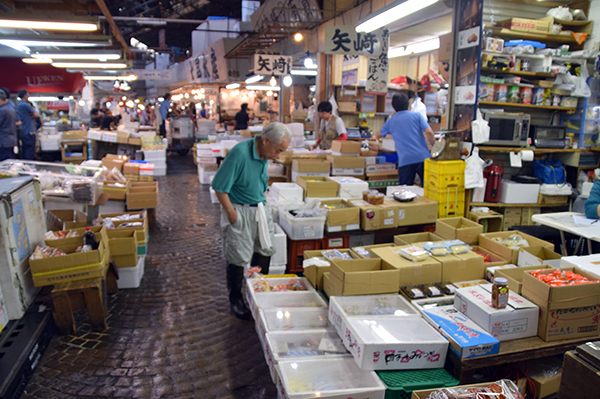 There were so many different kinds of fish. There were creatures that looked little dragons, creepy alien prawns from out of space, and weird giant fish with fangs. 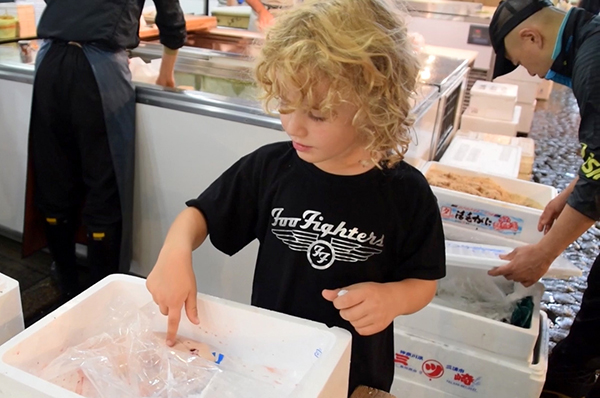 Plus this weird squishy pink thing (monkfish liver) that I couldn’t stop groping and poking because it felt gross and completely awesome at the time. Chef Oba called it Ankimo – Foie Gras of the Sea. Oh yeah!

Chef Oba let me hold slimy slithering eels, some lobster looking thingies that had what looked like blue guts hanging out of them (eggs), and a massive wriggly spider crab, which was spiky and ferocious and totally cool. 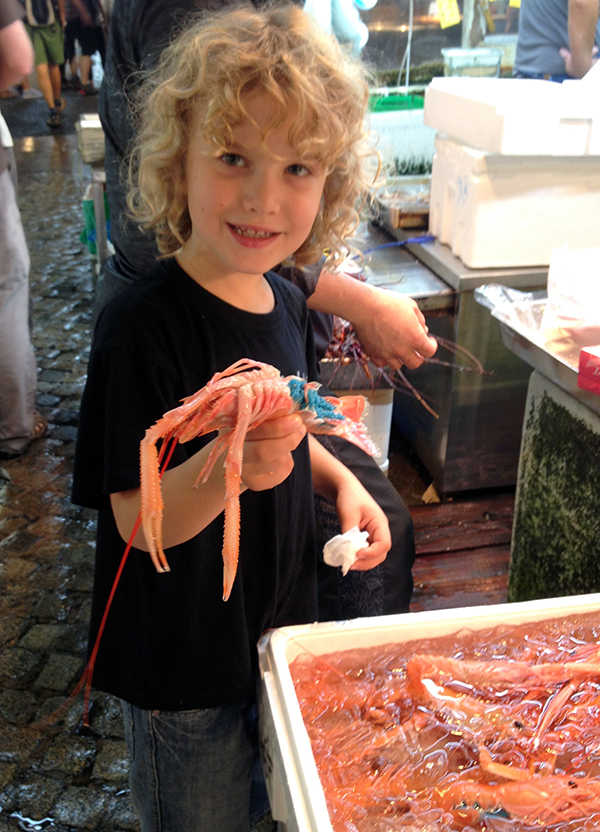 He also let me sample smoked octopus which was yum and some raw prawns he peeled straight from the water. They were a special kind and I thought they’d be disgusting but they were sweet and creamy.

Watching the sea dudes who worked at the market was the best bit, especially the fish ninjas – the guys who cut the tuna and use what look like actual katanas (long traditional swords for the non ninja-obsessed). 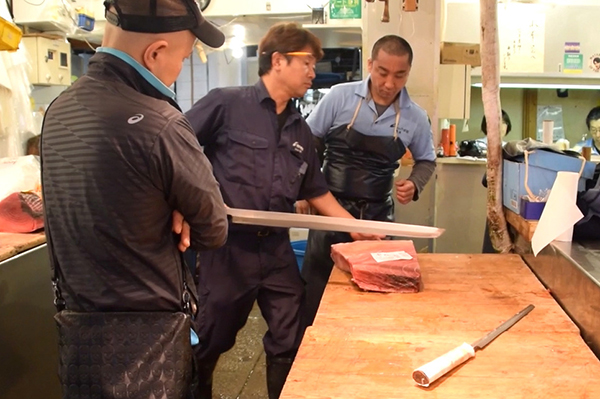 Tsukiji was so exciting that it made me sure that when I grow up I need to work in food. Maybe not as a chef, but definitely with the people who make it all happen. They’re legends.

When Chef Oba finished shopping he chucked us onto one of the fish trucks and told us to hold on! Then we sped through the markets like we were driving the Batmobile, only with fish. Best. Day. EVER! 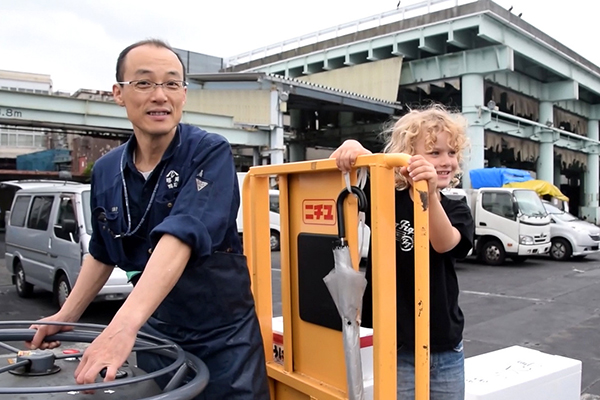 And it wasn’t even over! We still had dinner at Chef Oba’s restaurant! He was a little surprised that I was coming to dinner because he said even Japanese kids don’t really eat what I was about to try. But mama promised him I could handle it. 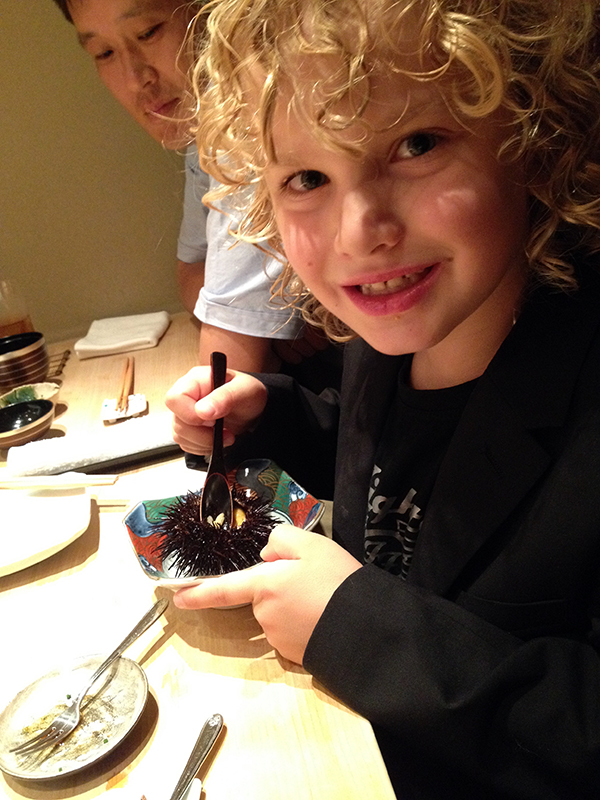 Sushi Kokoro is one of those places where the chef makes things right in front of you piece by piece and watches to see what you like. At first, Chef Oba kept my sushi simple. But he saw that I kept nicking mamas so he decided to let me try everything! 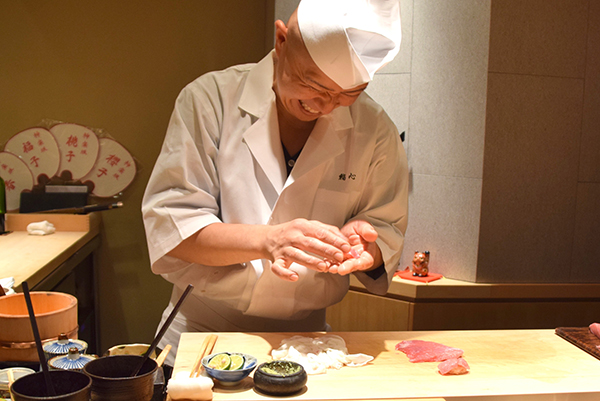 There was so many different kinds of fish and he prepared them all really differently. I really liked the raw bonito, which he stuffed like a sandwich with special sauces, and some mackerel which he rolled up with all kinds of herbs. 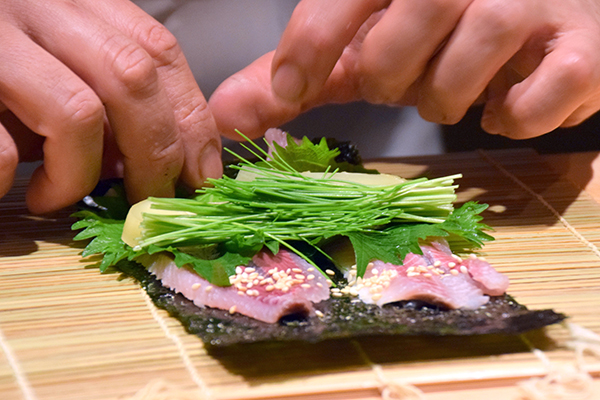 Plus more of those awesome raw prawns with some salty dressing and an amazing sea urchin thing that tasted exactly like the ocean. 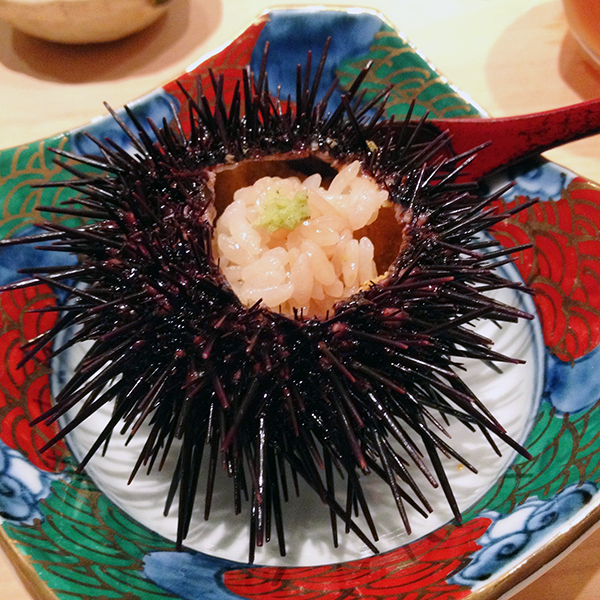 He also served that Monkfish liver I liked poking but he transformed it into a sort of super yummy pate. I reckon Chef Oba is a magician. 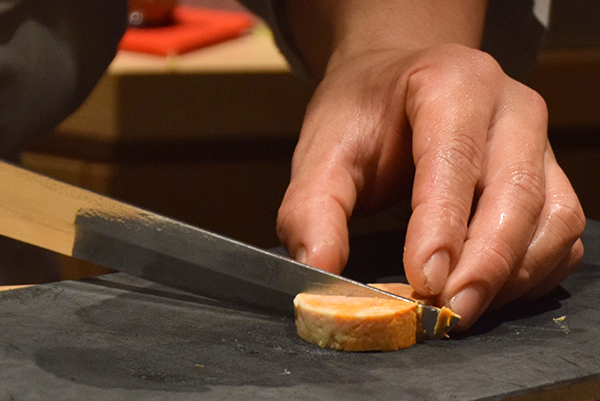 I think he liked me too because while everyone else got only two or three pieces of tuna, he gave me LOADS! And it was the most amazing stuff I’ve ever tasted. There were bits from all different parts of the fish and they were all different shades of pink and red. The textures were so, so amazing and the flavour kicked butt!

I’m not sure if it was appropriate to moan in a fancy sushi place but I couldn’t help myself and Chef Oba didn’t seem to mind.

I also couldn’t help asking Chef Oba for a job as his apprentice.

He said I could start next week! Booya!

(A word of caution: Tsukiji is a very busy working market and it can be a little dangerous. It’s absolutely not suitable for very young kids and I would also recommend not taking kids of any age in the very busy early morning hours (we arrived after 9am) or without someone like Chef Oba who knows the place well.)

Note: This meal and experience were independently paid for.