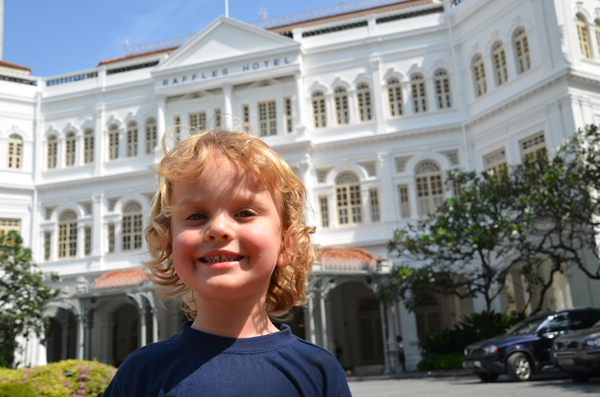 The history of Singapore is both long and convoluted and, given my lack of standing as a historian of any note or, in fact, at all, I won’t even attempt to delve into its complexities, except to state the obvious… the glamorous and glorious Raffles Hotel has seen more than its fair share of the noteworthy events and players, naughty and nice, in the city’s story.

In a few short weeks time I’ll be in Singapore soaking up The Raffles rarefied air over lunch. It is highly unlikely that my lunch date will enter the annals of Singaporean history (dependent on how much alcohol we consume) but my Raffles is so put out that I’m going to “his” hotel without him that his ensuing sulk could indeed go on record as one of the most epic of all time. You see, it is all “soooo unfair” because his luxurious namesake also happens to be his favourite hotel “in the whole world ever, Mama”.

It’s been a few years since my Raffles first staked his claim on the famous hotel (for a couple of nights at least) but it clearly made an impact that hasn’t been diminished by time.

Standing that first time in the multi-storey lobby it wasn’t hard to imagine what the hotel must have been like back in the day, when the rich, famous and totally shameless soaked up gin by the bucketload with the literary likes of Coward, Kipling and Maugham – who described The Raffles as “the legendary symbol for all the fables of the Exotic East”.

That time, swept as I was away by the ghosts of patrons past I was almost ready to suck back an imaginary Gin Sling when I realised that my erstwhile children had also been swept away… by the splendidly moustachioed doorman and his secret stash of biscuits! 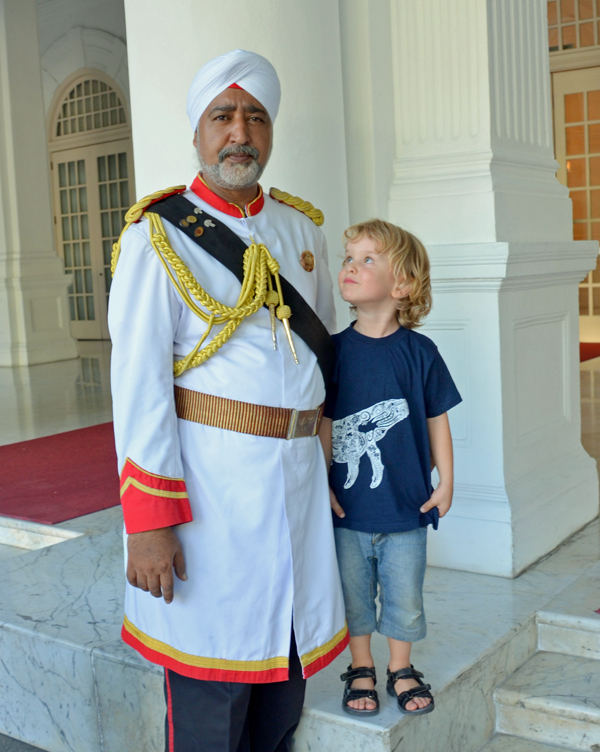 If you think the Raffles is too high brow for kids, think again. The staff were crazy for mine and the residents (the hotels’ affectionate term for guests) all stopped to say hello, even as my rambunctious rug rats scurried about in the lobby’s many nooks and crannies without even the slightest hint of the decorum this red-faced mother desired. 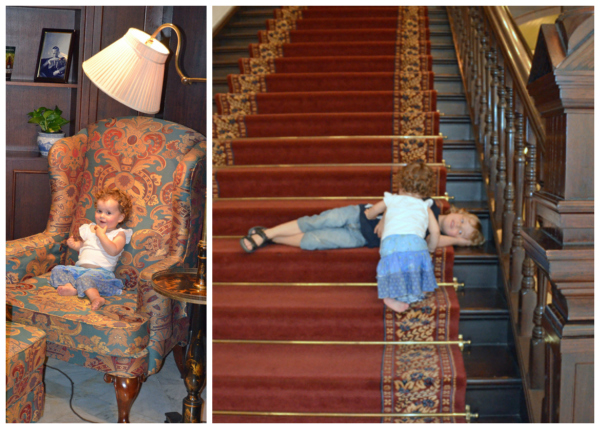 Our suite with its lofty ceiling, sitting room, marble bathroom, dark timber floors and oriental carpets even boasted a pretty cot for our perky tot. 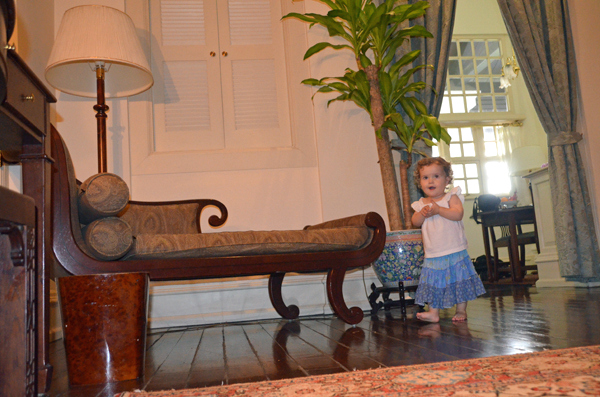 But my favourite feature was the visceral service of a butler who kindly offered to organise toys and games for the kids and to fetch us refreshments, which we partook in overlooking the cloister-like garden while my wee nutjobs played hide and seek in the colonnades.  One could easily get used to this. The butler. Not the nutjobs who were more inclined to get used to splashing it up in the rooftop pool. 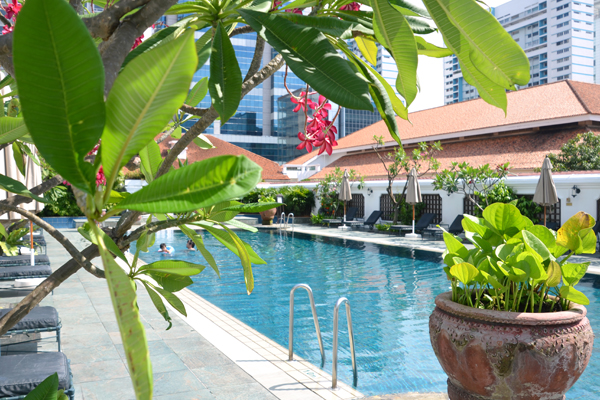 After their pool fix we caved in to our inner tourist and headed to the Long Bar for a Singapore Sling, the hotel’s iconic signature drink. It is an exercise in extreme touristy dagginess but… IT. HAS. TO. BE. DONE!

One mouthful in  and I decided the sweet concoction was not for me. If its unadulterated pinkness and $25 price tag reason weren’t enough to turn me off, the taste was. Raffles (the offspring not the hotel), however, was mightily impressed with his which was, of course, minus the lashings of alcohol that almost made mine palatable. 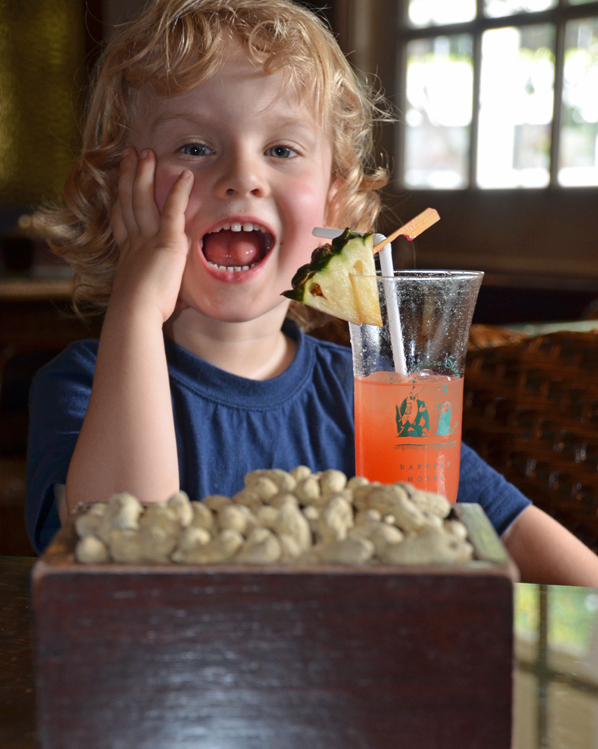 Sugarpuff proved quite the lush on what was her first visit to a bar and was rolling after her first drink of water. Though admittedly she did drink it neat. 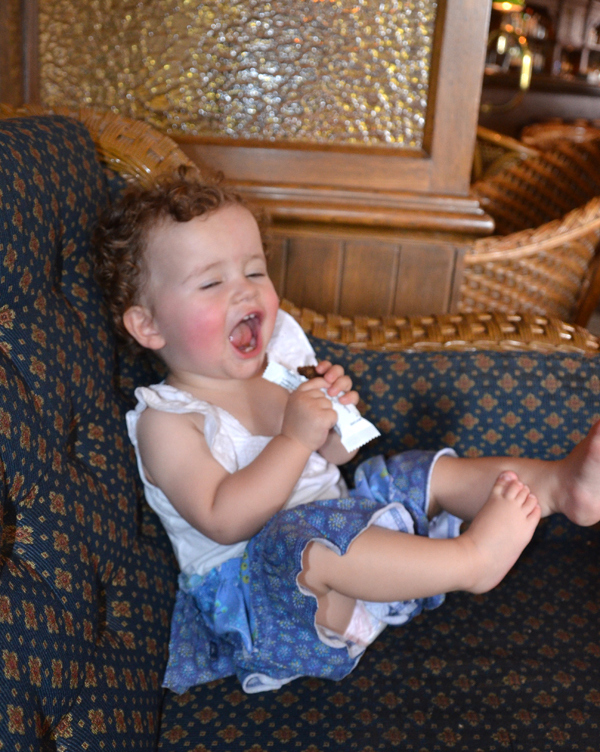 The kids also loved the crunchy floor. It’s a Long Bar tradition to shell peanuts at the table and toss their remains on the floor. I, repressed housewife that I am, instead made a tidy pile of shells on our table. But after a waiter brushed them nonchalantly to the floor I got in the swing of flinging them there myself… though part of me was still anxiously yearning for a Hoover. 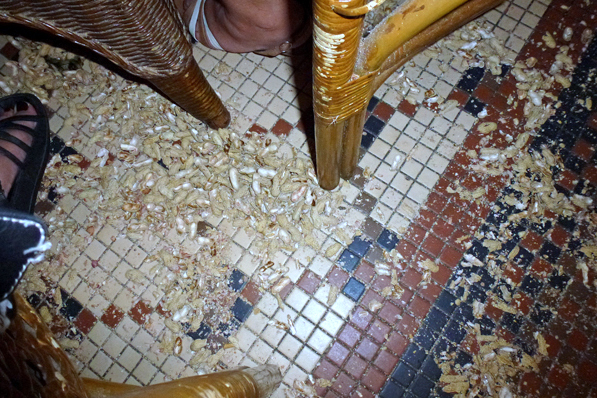 The kids thought being allowed to toss the shells about was awesome and were soon hurling peanuts all over the place. It’s a touch ironic that in a country where littering laws are so strict, that the one place it is allowed is in the refined environs of the Raffles. 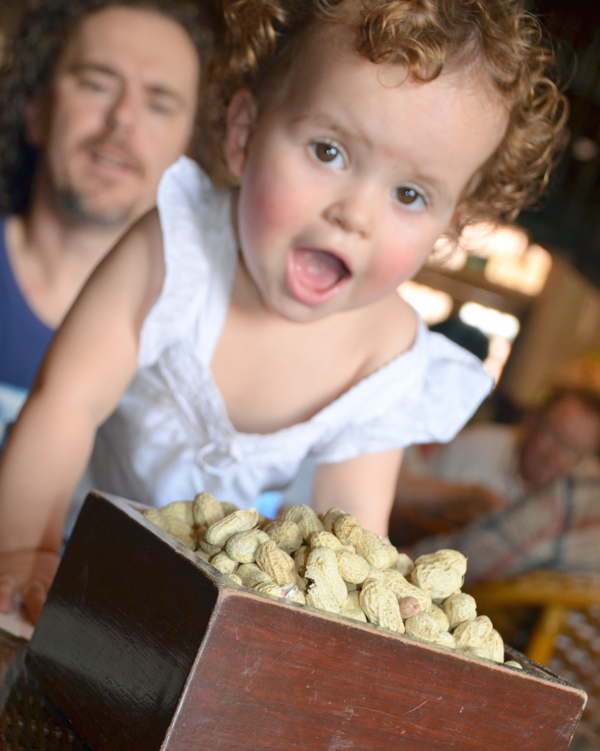 Once the novelty of actively encouraged littering has worn off a certain small boy drags us to the Raffles Creamery for an extravagant personalised ice-cream creation instead.

Neat as the icy treat was, Mr Eats World and I were after a fine dining experience and decide to take advantage of the hotel’s babysitter. Because sometimes mummy and daddy just need a little alone time with their Alaskan King Crab. 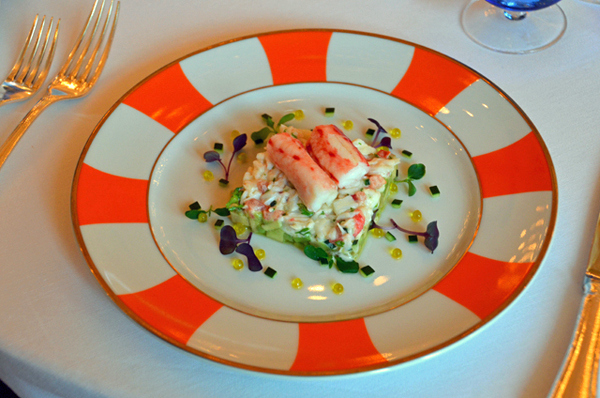 While our little lovelies noshed on room service fish and chips and watched cartoons with their babysitter, we enjoyed a leisurely lunch at the hotel’s fine dining room, Raffles Grill, where the sommelier perfectly paired wines with our meal and I seriously considered arm wrestling Mr Eats World for his glass of Billecart–Salmon Extra Brut, but that would have been be a touch uncouth in such dignified surrounds, even by my standards.

During lunch, we were joined by the hotel’s charming resident historian, Lesley Danker, who entertained us with stories of guests roller skating in the lobby, the tragic tale of a tiger being shot under the Billiard Room and residencies by wasted scribes, Hollywood legends and the most regal of Royalty. He also shared the tale of a perfectly polished and restored silver serving trolley that was buried in the garden by the staff to protect it during the hotel’s occupation in WW2, and is still in service today. 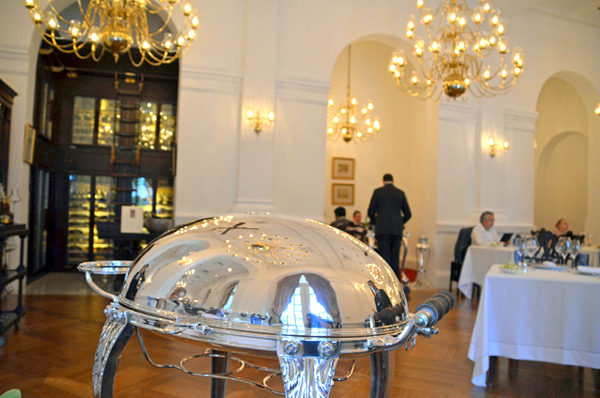 Her famous literary lodgers may be long gone but the Raffles still has her own stories to tell, and I’m looking forward to hearing more in a few weeks, even if it does put my own Raffles lovely little nose out of joint. 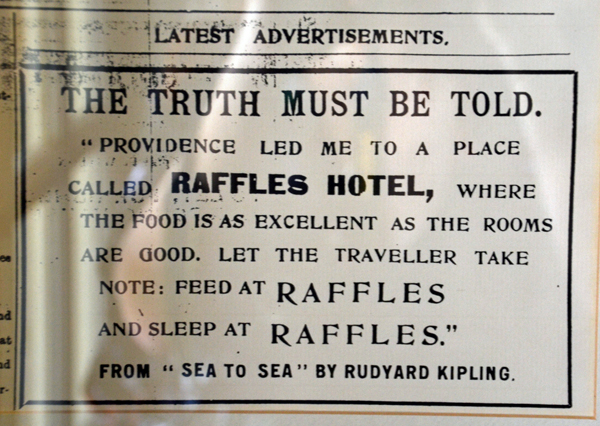 13 Comments on Raffles Singapore with kids