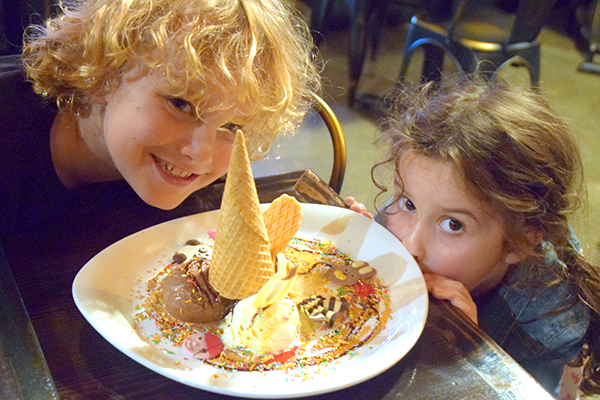 I really love Italian food… and saws, so I was really excited to try The Sawmill, Pymble, a new restaurant that is so cool it looks more like a place you’d find in the city than one hidden away in a quiet street in the suburbs.

The place was packed on a weeknight with people on dates as well as families and had a really good vibe. And don’t even get me started on all the blades!! The walls were covered in old handsaws, rusty chainsaw blades and these enormous mega spiky circular saw blades, which were totally epic! 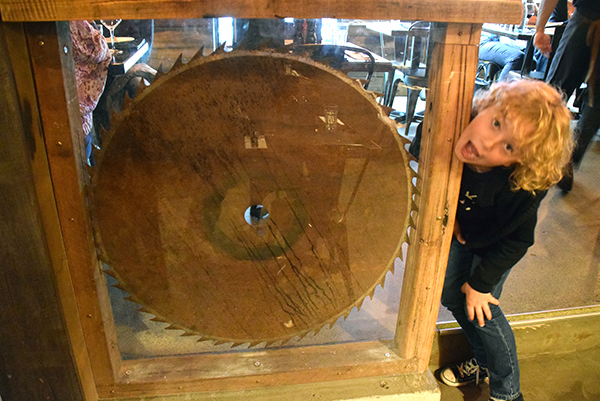 The owner, Rocco, told us the reason there are so many blades on display is because Pymble was named after a guy called Robert Pymble who lived here when it was just a great big forest. He chopped down all the trees and sent the wood down the Lane Cover River. I think it would have been better for him to not chop the trees down at all but it’s a bit late now.

Rocco was really nice so we let him recommend what we should eat. It’s always fun to do that because it makes you try things you mightn’t otherwise think to. He picked good. The food was awesome. I started with scampi and seared scallops (with tomato pesto). 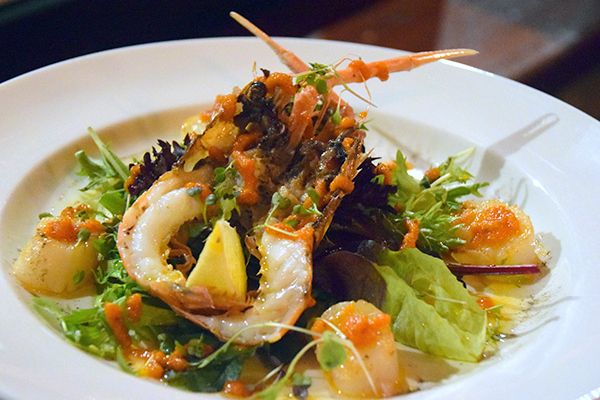 The scallops were perfection and the scampi was like a super-powered prawn. It was so super I’m surprised it wasn’t wearing a little cape.

Next we had the calamari, which was so tender and delicious that I could have eaten it all night. 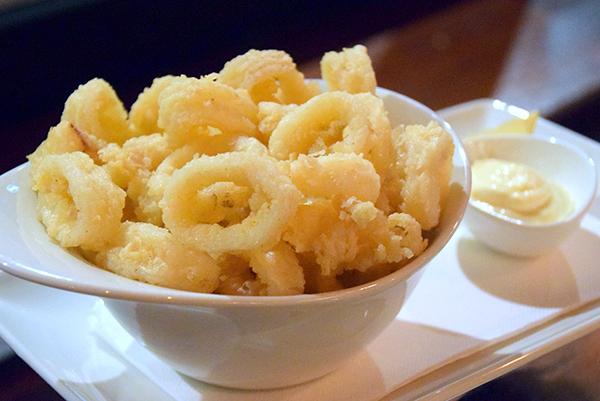 Then came the antipasto platter. I love an antipasto platter but this was next level. There were melt in the mouth strips of bresaola, salami and prosciutto plus loads of delicious olives, fried fruits and vegetables and chargrilled eggplant. 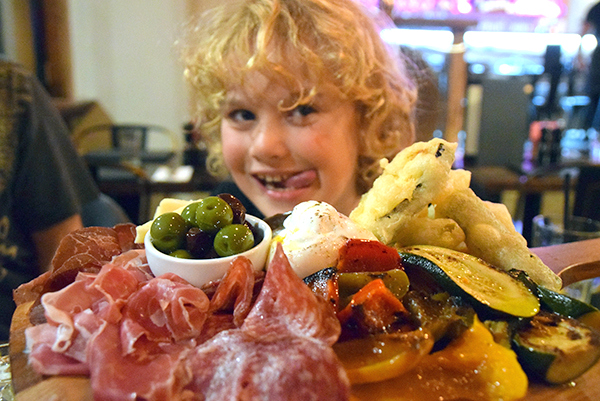 The centre of the dish platter was a massive ball of creamy burrata, which is just about one of my favourite things ever. Out of 10, I’d give this dish a 63 million.

For mains we had fluffy little clouds of gnocchi (with smoked scamorza, hazelnuts, butter and sage) that were covered in a smoky delicious cheese and oodles of butter and some plump and soft roasted pumpkin ravioli coated with a crazy good ragu. So, so good. 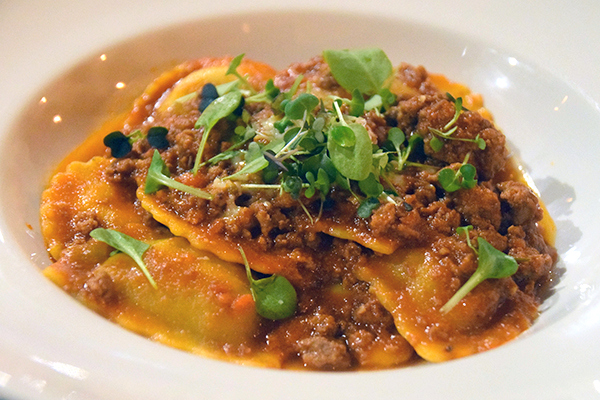 A normal family would have probably stopped at this point but we’re not normal so we also had one of the pizzas. Rocco suggested we try the capricciosa which came with smoked ham, olives, mushroom and artichoke. 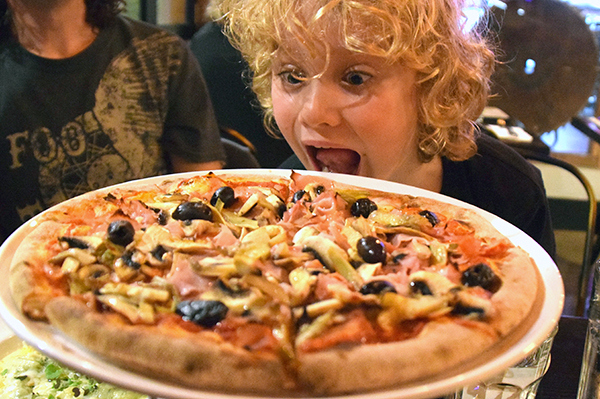 I was hoping they’d slice it with one of the old saws but they just cut it the regular way. It still rocked.

They really looked after my baby sister too. They gave her a colouring and puzzle pack to keep her busy and a special choice of dishes from the kids menu which she really loved. They even gave her a special dessert, which looked a bit like an ice cream truck had collided with a confetti truck. She loved it.

Speaking of dessert, the desserts we had made the Masterchef ones look lame! They were all plated with glittery gold and clever touches that made them look awesome, but more importantly they were totally yum.

I had the waffle banana split with Belgium chocolate sauce and three scoops of gelato. 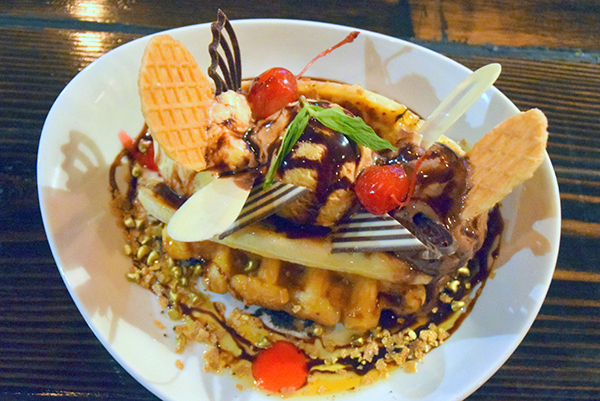 It was so, so caramely and utterly delicious. But my favourite thing of all was the epic platter of cannoli. They were made in-house by their superstar pastry chef and were really crisp and stuffed full of absolutely delicious fillings like ricotta, chocolate and hazelnut. 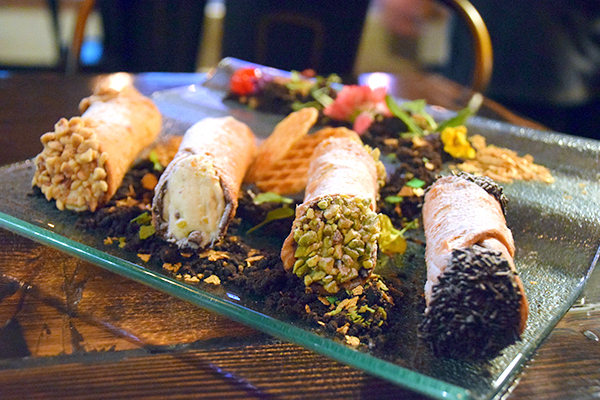 Disclosure: Raffles was a guest of The Sawmill