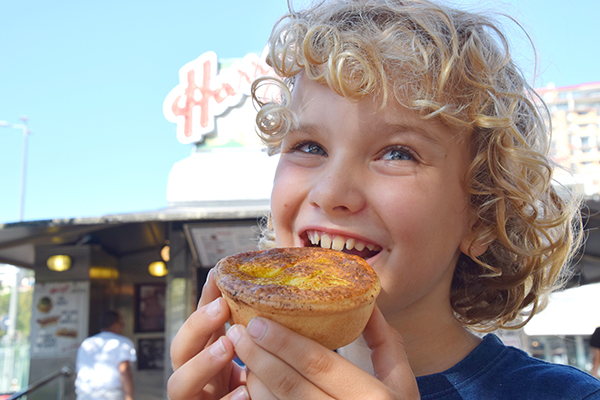 And what made this visit even better is getting to scoff them in the company of Harry’s super nice owner, Michael Hannah, who kindly filled me in on a little Harry’s history. Michael, who obviously isn’t a Harry, has been the owner of the stores for around 30 years and knows a thing or two about pies.

Obviously, I’m wild about Harry’s and always make a point to stop for my absolute favourite, the amazing chicken curry pie, which is chock full of chunks of juicy certified organic chicken (as are all Harry’s chicken pies and rolls) and delicious Indian spices, whenever I can. 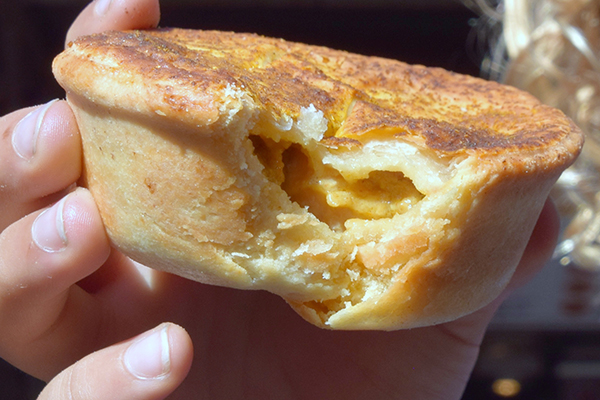 I’m also partial to eating a Tiger, but not the furry variety, because that would be wrong. I’m talking about Harry’s best selling pie, The Tiger. 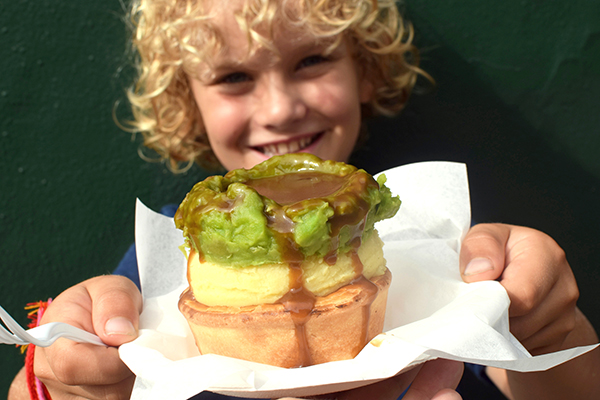 It’s a super tasty beef pie (though you can have whatever flavour you like) that is topped with a scrumptious tower of mashed potato and mushy peas with a big pool of gravy in the middle. Epic!

Besides the original Harry’s Cafe De Wheels in Woolloomooloo, one of my fave spots to grab a pie is in Newcastle because to me there’s something special about sitting by the water, watching the boats go by and enjoying a good pie. It’s located in an old renovated tram along the waterfront. But did you know that there are eight other Harry’s Cafe De Wheels in Sydney alone, stretching from Chinatown to Campbelltown? And Michael tells me there is another one opening in Darling Harbour soon.

In fact, you’ll even be able to get a Harry’s fix in China soon, as Michael told me he is opening a Harry’s Cafe De Wheels there too. I think he should definitely consider adding a dumpling pie to the menu. 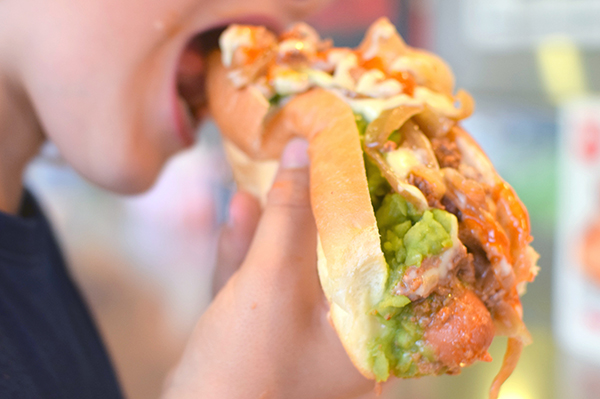 Now while I enjoyed my pie double header, I may possibly have also devoured a Chilli Dog, most of dad’s pastie with mushy peas (which is also Michael’s favourite from the menu), and a good chunk of mum’s unbelievably tasty spinach and feta roll. 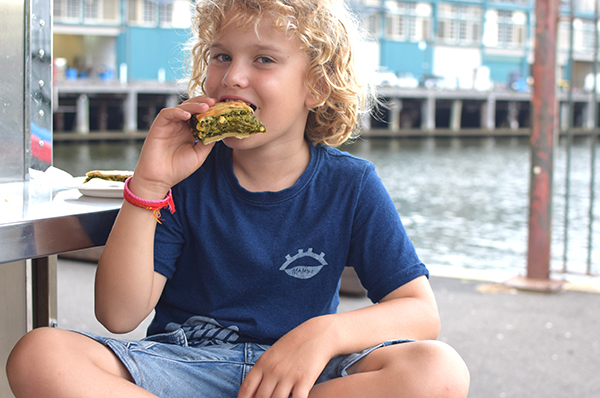 But I still had room for one of their delicious apple turnovers. These are a must for dessert because they are all crispy on the outside, filled with hot steamy apple chunks and then topped with cream. Yummo. 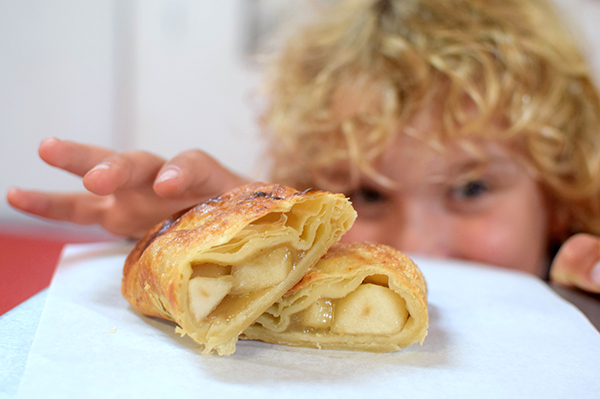 You might be interested to know that along with their famous pies, Harry’s also does seriously good hot dogs, organic chicken rolls topped with yummy gravy, a pulled pork roll with spicy chipotle sauce, the best hot chips, which are best drowned in the yummy gravy, and more. 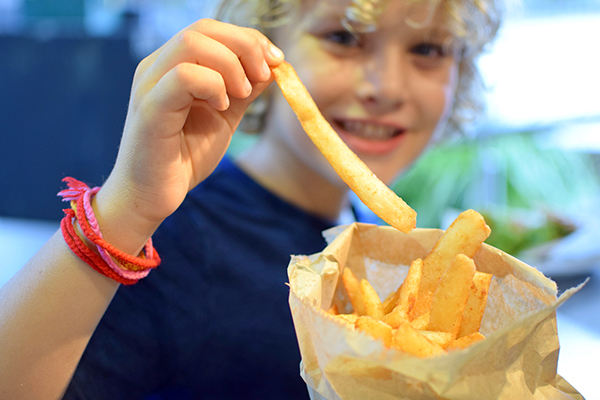 How do I know? Because I’ve tasted them all, of course. And let me tell you, each and every one of them is awesome. 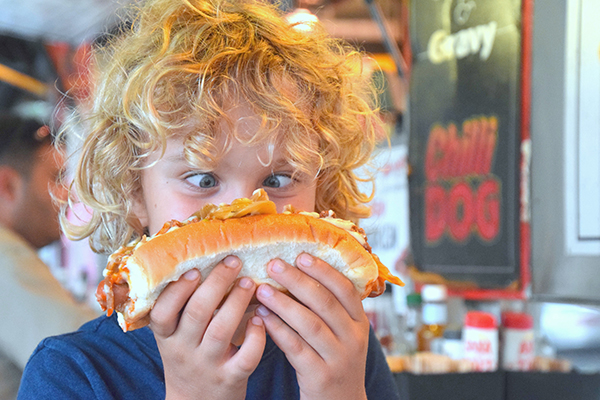 I think Michael was impressed at my ability to scoff pies because he told me that the most pies eaten in one go at Harry’s Cafe De Wheels was 16, for cricketer Freddy Flintoff’s around Australia show. Amateur! I reckon I could top that easy. 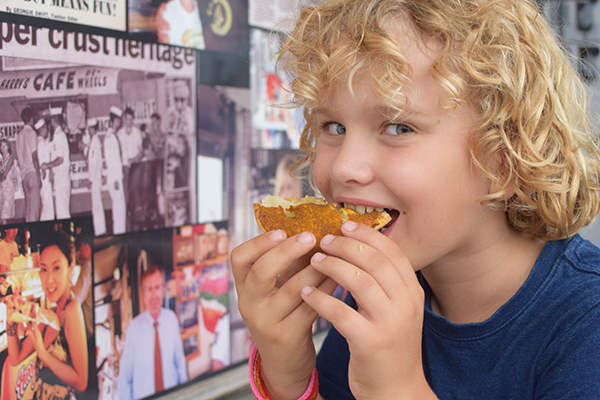 Besides Freddie Flintoff, loads and loads of famous people have eaten at Harry’s over the years and I really love looking at the old pictures on the truck at Woolloomooloo. I even spotted my hero, Richard Branson, scoffing a pie! I always knew he was a genius.

Michael says other Harry’s pie lovers have included Billy Crystal, Russell Crow, Elton John, Pamela Anderson and even Colonel Sanders, who must have felt like a change from chook. He also says they were all pretty nice, but how could they not be after eating one of his delicious pies.

Disclosure: Raffles was a guest of Harry’s Cafe De Wheels but all pie-hole stuffing and views are, as always, his own.