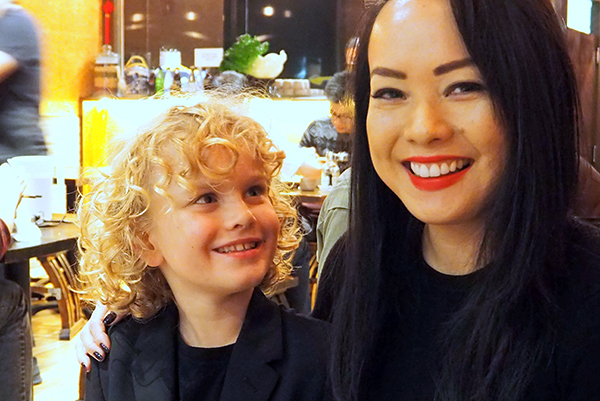 In his bid to become the food and travel world’s answer to Oprah, Raffles has been busily seeking out the coolest of cool people to wax philosophic about travelling the world… and stuffing his face. Though disappointingly we’ve yet to hear back from The Swedish Chef, Raffles has been chatting to one very special person from his most wanted list, the lovely Lorraine Elliott of Not Quite Nigella.

Not only is Lorraine one of Australia’s most successful and respected bloggers, she is one of its nicest, so it’s no surprise that my hard-nosed junior journo fell a little in love. Here my smitten kitten digs deep on everything from dumpling etiquette to what Lorraine has hidden in the back of her closet.

Enough from me, over to the dynamic duo…

My mama and I look at Not Quite Nigella together nearly every morning over breakfast and I love seeing all the cool places you travel to and the yummy food you eat and cook so I’m really excited to talk to you.

My mama says you’re kind of like the queen of blogging… Do you wear a tiara?
Hehe. Raffles I love these questions already because I’ve never been asked this before! I have one but it is stashed in the back of a cupboard for dress ups. Of which I do a lot.
Awesome. Me too!

What about types of food then? My favourites are French, Japanese and Chinese. What are yours?
No way! My favourite savoury food is Japanese but for dessert I love French pastries and cakes. And since I’m Chinese I always go back to that. But having said all of that Japanese food is my favourite.

I see that you also eat a lot of dumplings like me. I have a special technique called “fire in the hole” where I gobble them down in one bite. Do you have a dumpling eating technique?
Raffles, are you related to my husband Mr NQN? Because that’s what he does too. I think you two would get along well and I’ll tell him the name of your technique. With the xiao long bao or soup buns I bite a hole in the top and let the steam come out and then sip the soup and then eat the dumpling. But I think your method sounds the most fun.
Mr NQN sounds really cool!

Your Halloween parties are the most epicest of all time! What’s the spookiest thing you’ve ever made for your friends to eat?
Thank you! You must come one year! Hmmm… probably the road kill Armadillo cake or the Pig Man cake that was actually supposed to be something else entirely. But do you know the things that freaked my friends out the most? The rat brownies! One friend refused to touch them!
That’s weird. I would eat all of your rat brownies, they’re so cute. I would so, so, so, so, so, so, so, so, so, so love to come to your Halloween party. I promise I’ll wear the best costume ever.

I love watching Adam Liaw, Luke Nguyen and the Swedish Chef. Who’s your favourite TV chef?
Can anyone really top Swedish Chef? I think not. Bork!

What is the weirdest thing you have ever eaten? Did you like it?
I’ve eaten a pickled huhu grub in New Zealand at the Hokitika Wild Foods Festival. It was OK; it tasted sweet like the pickling juice. Have you been there? I think you’d find it really interesting.
I haven’t been but I’d really like to go to New Zealand to see my cousins. The huhu grubs sounds pretty gross but I’d try at least one.

If you had $1000 to eat one meal where would you go?
I’d take Mr NQN and a couple of friends to Sukiyabashi Jiro in Tokyo! I would love to see for myself what it is like.
I will make mama take me when we go to Japan. (mama says only if it is his shout)

If you had $10 to eat one meal where would you go?
A Chinese dumpling place on Liverpool Road in Ashfield.
Smart. Sounds like what I’d do.

How many countries have you travelled to? Do you have a favourite?
My favourite region is probably Asia but this year I went to Scotland and I loved it and last year Chile was my favourite destination. I like being surprised by a destination (surprised in a good way, not a bad one) and I love having preconceptions dashed.
I love surprises too. I think that’s what makes travel the funnest.

I have a bucket and spade list of all the places I really, really want to go. Three things on my list are to eat everything ever in Japan and hang out with ninjas, to eat dumplings on the Great Wall of China, and to go to Mexico for ceviche and dia des los muertos because it looks so, so cool. Do you have a place on your bucket and spade list that you want to go to more than anywhere else?
Well first of all Japan is so fascinating and totally made for kids – I lived there for two years and I loved my time there so you will have so much fun! The top 3 things on my bucket and spade list include Cuba, Turkey, South Korea and Bhutan. Okay, that is four.
They all sound really cool. Can I come too?

What’s your favourite way to travel – plane, train, ship or car?
By plane I think. I’m fascinated with aeroplanes and how they manage to do what they do!

You’re really nice. Would you go on a dumpling date with me?
Definitely!
Epic!

…And so they did. With all due respect to Mr NQN you’ve got to admit they do make a really, really ridiculously good-looking couple. Just look at them – they’re practically the Angelina & Brad of the blogging world. 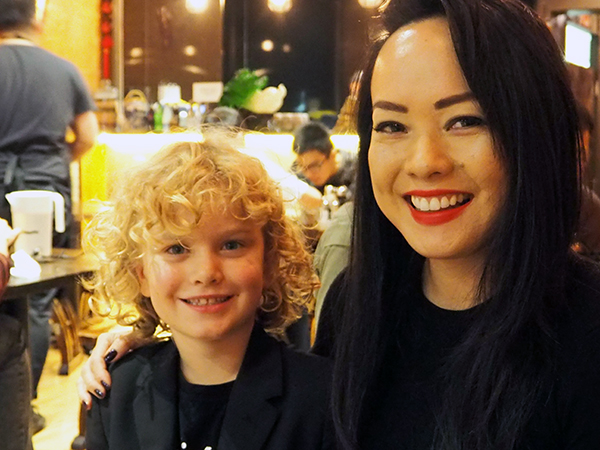