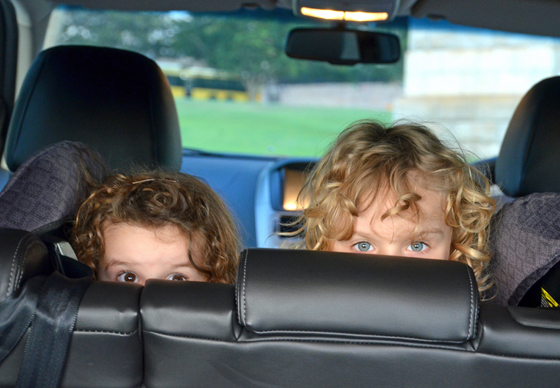 Raffles and Sugarpuff love driving games, especially spotting red cars, but never so much as the one they’ve spotted parked outside our apartment this week… a shiny red Ford Territory Titanium that’s ours for the next six weeks as part of the Voices of 2014 Paint the Town Ford Challenge.

Sugarpuff christens her “Lulu” but Raffles claims the car is a boy and insists on “Terry”. One thing they do agree on is that we need to hit the road to get to know the gender confused automobile better! So we’re trading our usual Saturday schedule of swimming, chores and the kids watching Frozen on loop for a little day tripping!

At least that’s the plan, but clearly my frost-bitten offspring are unable to “let it go” and we’ve barely left the suburb when Raffles announces he’s brought the Frozen DVD with him to try the car’s in-built television. AGH! Is there no escaping the icy parental hell that is Arendelle?

Thankfully Elsa, Anna, Olaf and Co stay in the car when we make a pit stop at pretty Audley Wier in the Royal National Park for a stretch and some fresh air. 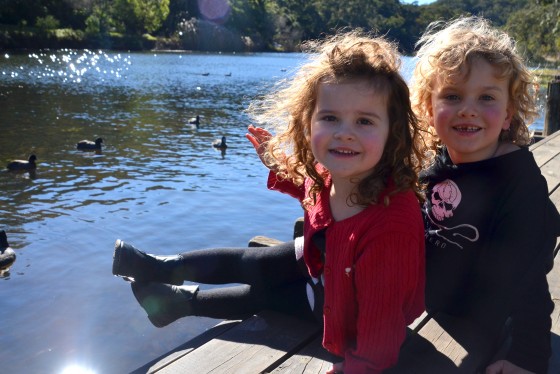 Our animated stalkers are also silent once we arrive at our destination, Helensburgh’s Sri Venkateswara Hindu Temple, where we’ve come for a hit of culture with a side of dosa (fermented rice crepes). 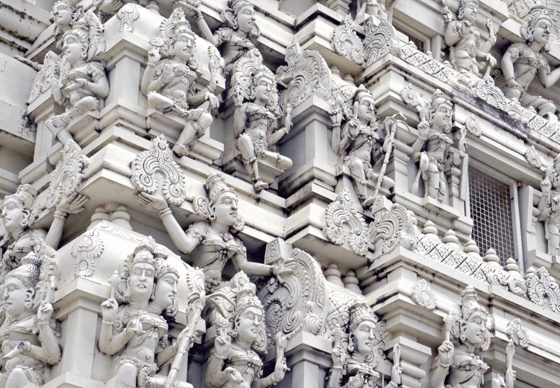 When we open ourselves up to other cultures, beautiful and unexpected things occur and today we must be oozing openness, because magic happens before we even get our shoes off at the temple entrance. 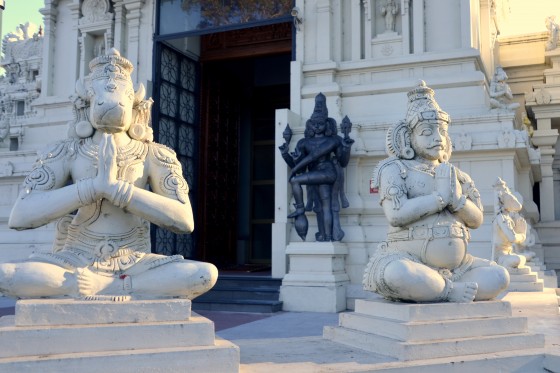 Raffles has spotted a ritual being performed in the car park and a kindly gentleman has spotted Raffles. Curiously, he directs us into the temple where, with a knowing smile, we’re handed a bowl of fruit into which our car keys are placed.  Umm… This may be starting to sound all very 70’s wah chicka wah wah but we’re told it’s just the first step in a car pooja. Phew.

A pooja is a holy blessing and it turns out that Hindus also perform poojas on inanimate items to protect them from mishap… including shiny new cars.  Who knew? I mean, besides 950,000,000 Hindus.

At a shrine to Lord Ganesh – remover of obstacles and destroyer of sorrows – a chanting pujari (Hindu priest) sporting a fabulous gravity-defying quiff splashes the bowl, and the keys to the Territory, with sacred water before making tilak marks on our foreheads with ash. 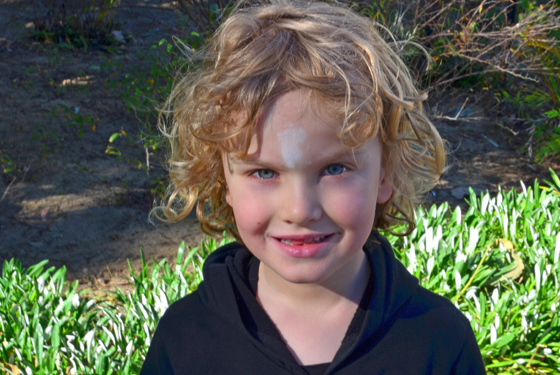 Back in the car park, a mesmerised Raffles follows him as he circles the car chanting. 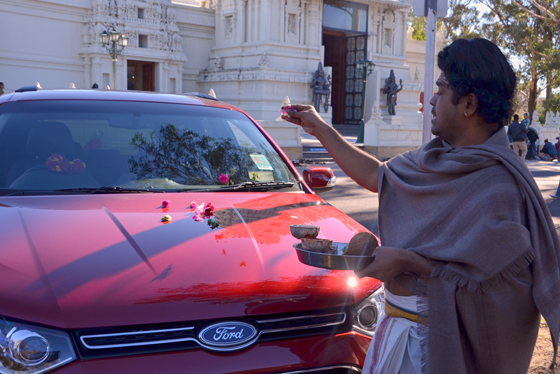 The doors are opened as the mantras continue, and the driver’s wheel earns a tilak mark of its very own. 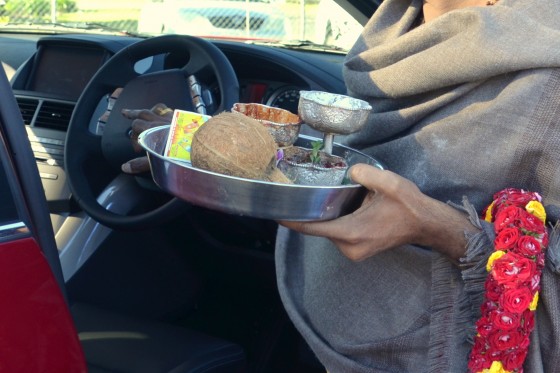 The bonnet is strewn with petals and sacred water before a coconut is opened and its juices sprinkled on the front tyre. 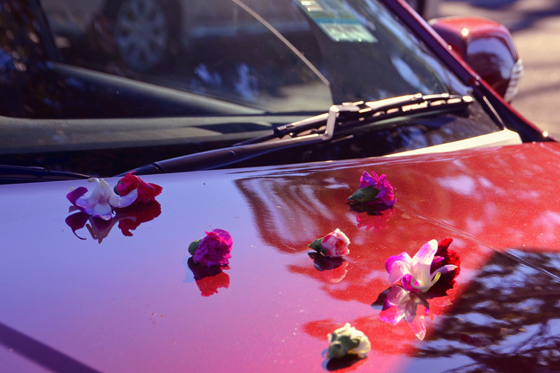 Finally the pujari lays an intricate garland of fresh red flowers across the steering wheel and, genuflecting, leaves us with an automobile who I’ve gotta say is looking and smelling far more “Lulu” than “Terry” with her pretty new adornments. 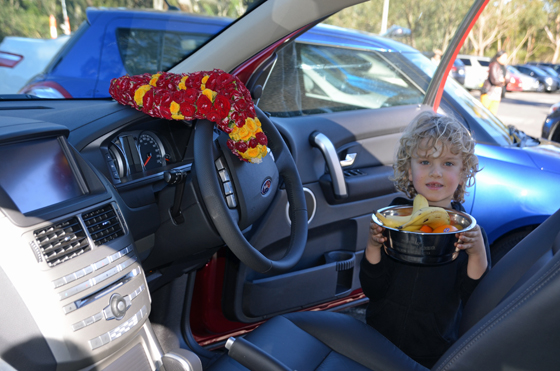 Raffles, already fascinated by Hinduism’s magical devas and deities, is enraptured by the experience and wants to do it all over again. We suggest he just enjoy the spontaneity of the moment and take him off to do what we do best. Eat!

Sitting in the shadow of the elaborate temple at the vegan Sri Venkateswara canteen we feast on spice infused tamarind rice and Masala Dosa (pancakes stuffed with spicy potato). 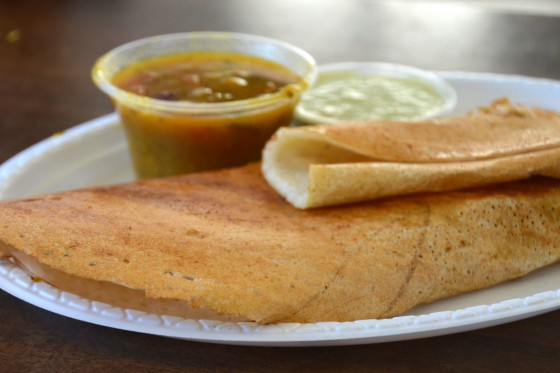 The kids devour a plate of Paratha (a layered flatbread) and we all fall hard for the Poori (crispy fried puffed bread served with a chickpea curry). There’s always room for dessert so we grab a bag of laddoos. The cardamom spiced balls of cakey loveliness are stuffed full of nuts and I wash  mine down with a spicy sweet masala chai. 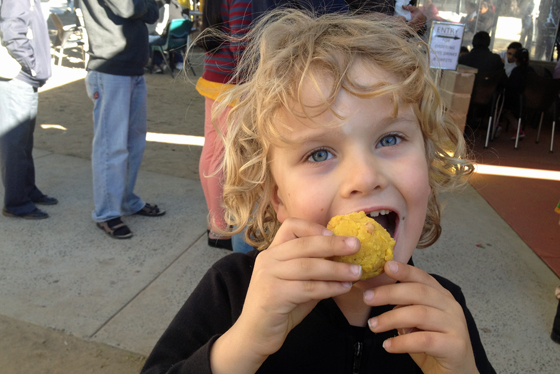 After our colourful hit of culture and cuisine we hop into the newly blessed Lulu/Terry and head the few kilometres to gorgeous Bald Hill Lookout at Stanwell Park to digest our meal and enjoy the panoramic views before our long drive home.

And to stuff our faces with ice-cream (because like proverbial sacred cows, we have second stomachs for those). 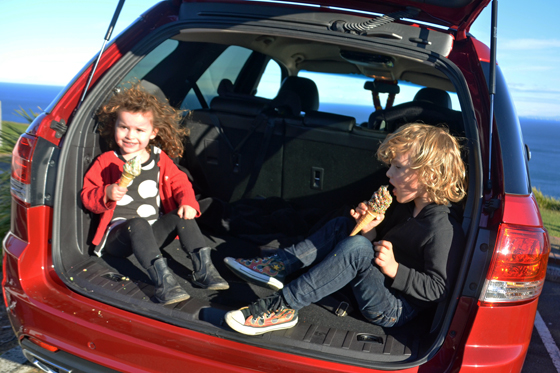 It’s been a magical day of culture, cuisine and cruising, so much so that Raffles wants to tell you a little more about it! Over to him…

Thanks to Ford Australia and Kidspot we’re delighted to be enjoying our adventures in a new Ford Territory Titanium as part of the Voices of 2014 Paint the Town Ford Challenge. This is the first of three posts we’ll be sharing as we get to know Lulu/Terry over the next six weeks.