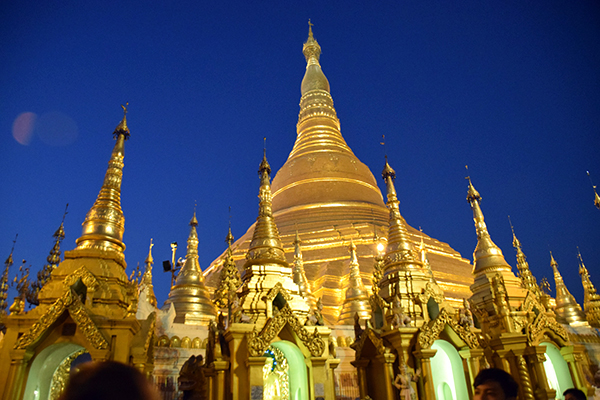 Raffles and I have just completed our first ever take-no-prisoners, one-of-a-kind mother and son adventure, exploring the best of Myanmar, a fascinating country with so much to see and experience, it had been on my holiday hit list for years.

Of course, given our extraordinarily itchy feet, and the fact that we’re both a little mad, we couldn’t just head off for a quiet weekend pour deux in a cosy hotel close by. Nope, instead my little action man and I took six flights in six days across Asia, complete with 5am starts and ridiculous o’clock finishes, to compete in Escapers 17, an Amazing Race for influencers.

Now when I say it was a mother and son adventure, I should probably point out that while we did leave Mr Eats World and Sugarpuff at home this time, we weren’t really alone. And by not alone, I mean we were actually joined by 23 of our newest BFF’s, a camera crew, and our gorgeous hosts from AccorHotels, Scoot Airlines, Tiger Air and Asia Holidays on the rapid race across Myanmar and Singapore. 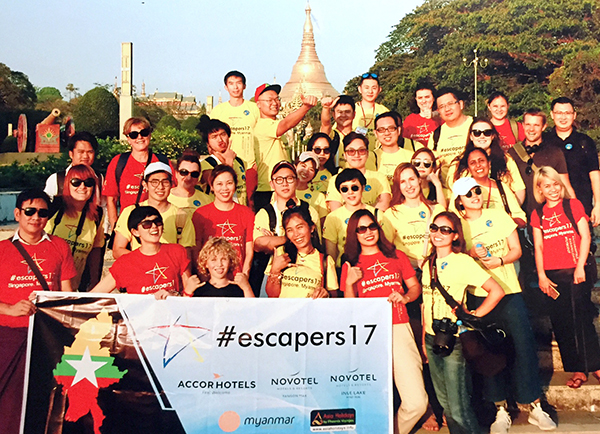 But that’s just a technicality; it was time for my boy and I to try travelling as a dynamic duo, bonding over amazing experiences we’ll remember forever. Well, things he’ll remember forever due to the amount of wine I consumed. But I’m sure he’ll be happy to fill in any blanks for me. I jest! I remember it all, even the bit where I may or may not have accidentally taken my nine-year old son clubbing, but we’ll not go into that here because Raffles and I made a pact that what happens in Myanmar, stays in Myanmar.

How does a nine-year old boy fit in? Well, he’s not just any nine-year old boy (I state with utter bias). As Accor’s littlest Welcome TV host, an experienced public speaker and a travel influencer in his own right, the organisers felt he would be able to hold his own amongst his older peers, so he and I were invited along as, wait for it, the “Intruder Team” (enter dramatic music here).

Once we were revealed, on a plane to Myanmar (formerly Burma), Raffles and I were warmly welcomed into the fold by our absolutely delightful competitors who not only embraced and befriended my little man, but looked out for him. For that alone I think they too are all rock stars. A special shout out to the lovely Nicole from Bitten By the Travel Bug, who kept an eye on my boy in the pool at an evening event before I ended up jumping in to join them… fully clothed with a wine in one hand. Did I type that out loud? Whoops, gotta remember that pact.

Anyway, here’s how day one went down…

A little Escaper takes on Yangon

Our first day of challenges started with us saying minglebar (hello) to Yangon (formerly Rangoon), a city of seven million people and Myanmar’s economic and cultural centre. It’s a fascinating city, which, due to decades of isolationist military rule, patchy electricity and restricted communications, appears to be almost stuck in time.

The city is liberally littered with crumbling colonial buildings, glowing golden pagodas, chaotic markets and rusted old railways. And curiously, for an Asian city, there’s not a motorcycle in sight – they were banned from the city in 2003. 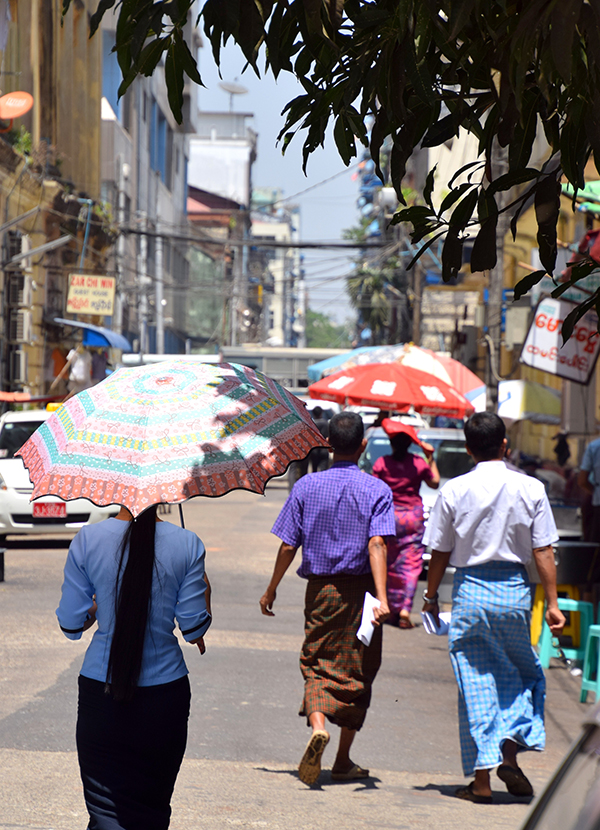 Though its architectural heritage has not been overtaken by overdevelopment or ugly urban sprawl, the city, which really only opened up to tourism a few years ago, is forging a new path forward, as we discover amongst the delightful modern artworks at the River Gallery, our starting point. 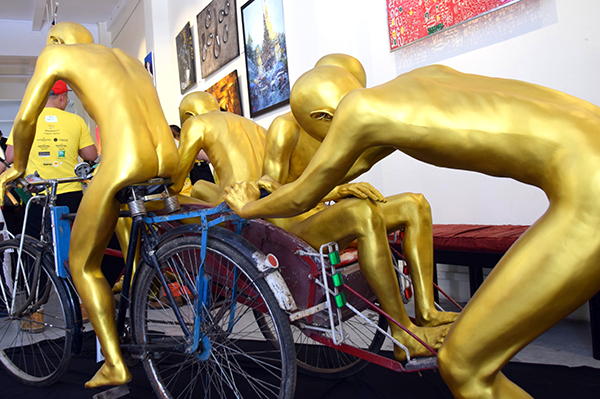 We set off on our first set of challenges, to find four Yangon landmarks, with only a rough map, some vague clues and the serenely smiling, Pyit-Taing-Taung (or Karl as Raffles prefers to call him) for company. 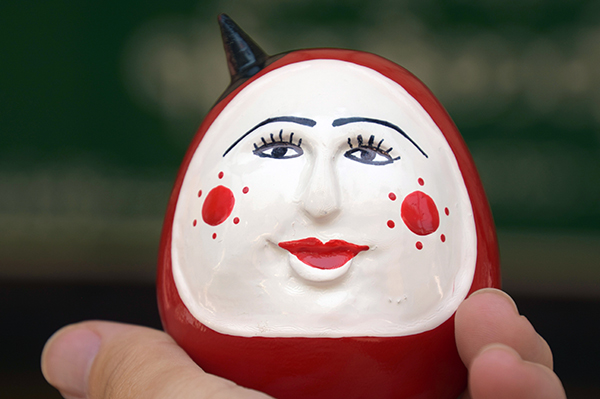 The knockabout egg-shaped doll is one of Myanmar’s traditional toys whose name translates to “that which rights itself when knocked down”. PTT, or Karl, is a lovely reminder to pick one self up and persevere no matter how tough things get.

Luckily things aren’t too tough today and he accompanies us on a visit to the General Post Office building where we are quickly distracted by platters of delicious snacks made from indiscriminate ingredients. 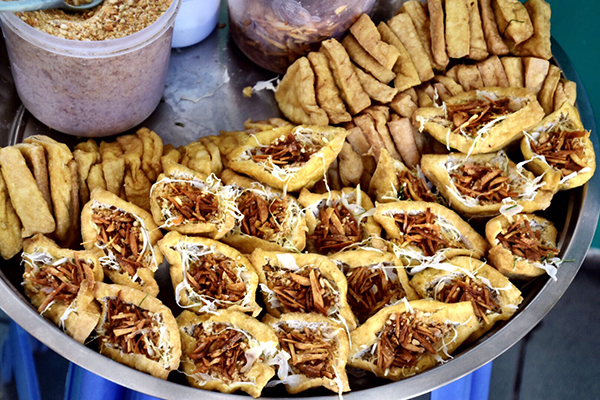 We have no idea what we’re ordering but that’s never stopped us before, so we dig in anyway! We scurry, and by scurry I mean walk as slowly as possible, along a side street filled with vendors touting fragrant treats. 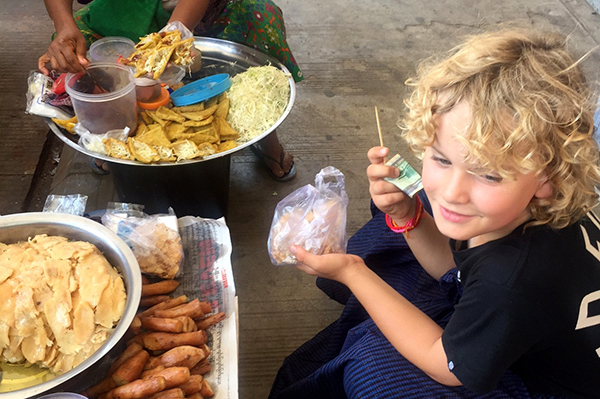 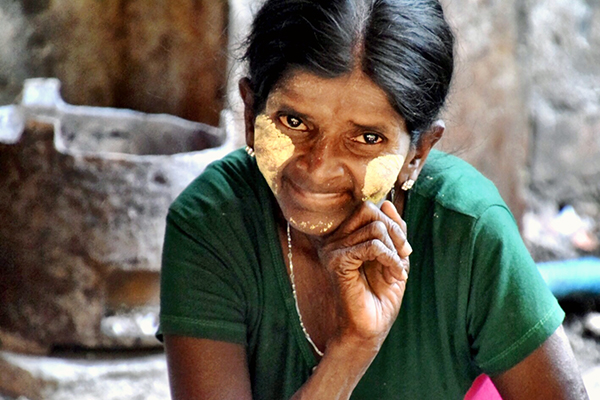 Then we spy some not-quite-so-delectable offal and bugs, and of course have to stop and try those too. But we both agree that once is enough, or maybe even too many times, for the crunchy bugs

Next we make the pilgrimage to see the towering twin spires of St Mary’s Catholic Cathedral. 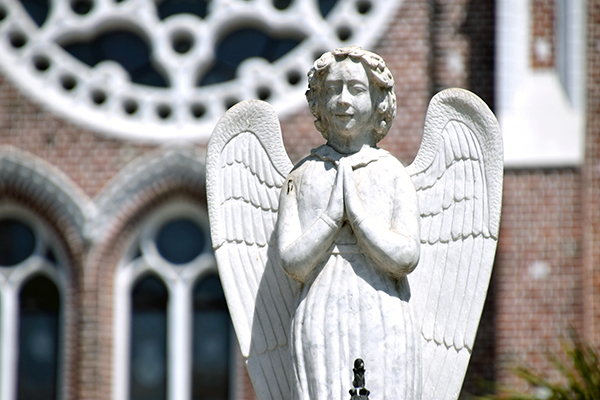 We tick off the Independence Monument in Maha Bandula Park before stopping at Sule Pagoda, a Burmese stupa that serves as a roundabout and the centre of the city grid. The ancient Pagoda served as a rallying point during several pro-democracy demonstrations and bore the brunt of the brutal reaction by the Burmese government. 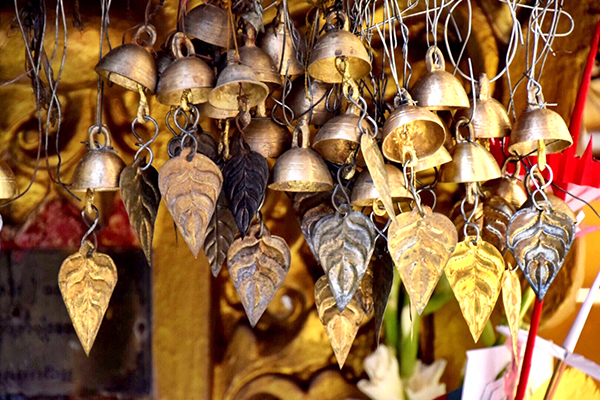 But on our visit, it is a place of pure peace, where Raffles finds his birth day shrine and makes offerings to the Buddha. Raffles was born on a Monday and he is informed by a local teacher that those born on a Monday are said to have a good memory and a love of travel. True that! 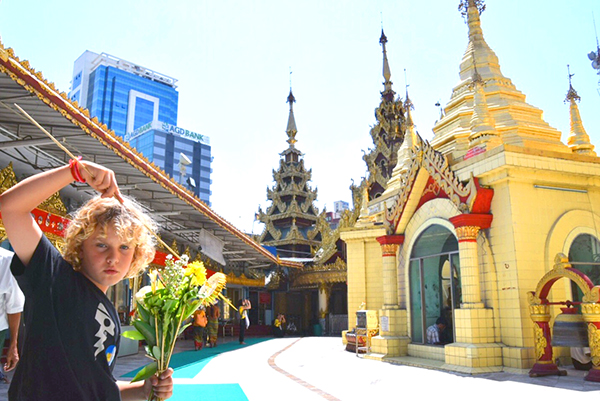 Somehow we find our way to Bogyoke Aung San (Scott) Market, with its 2000 stalls of locally made jewellery, gold, art, fabrics and handicrafts, to meet up with the other teams. 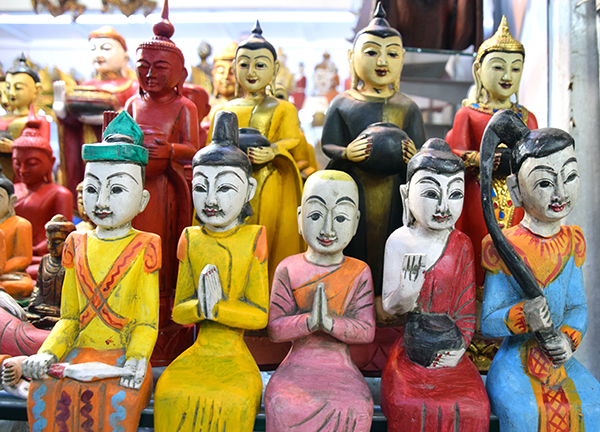 Here we nix shopping to make time for a sweet, strong and steamy Burmese tea (chock full of condensed milk) with the locals. Then we follow the rest of the #Escapers17 crew to the next stop, the Yangon Circular Train, the local commuter rail network that serves the Yangon metropolitan area. 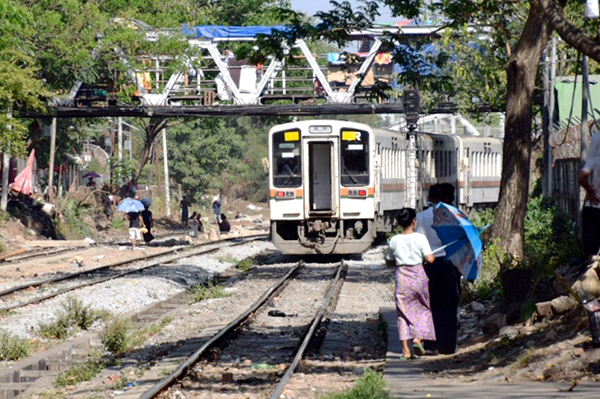 This rattly train provides an amazing chance for us to mingle with the lovely locals – who prefer the train, in all its hard wooden-benched and rusty-roofed glory, to getting stuck in the fierce traffic snarls that are inescapable in the city – and to enjoy a glimpse into their lives.

A smiling family invites my golden haired boy to sit with them, which he does, but only after hanging out of the unsealed windows to soak up the sights outside.

We alight for the walk to the People’s Park and our next challenge! Raffles is nervous when he sees an enormous rollercoaster – he’s not a fan and he’s still a little nauseous from the bugs. But we keep walking and find that there are much bigger surprises in store.

Shwe Daung Circus is home to a multi-talented team of European, African and South American performers, along with a couple of talented pooches (one of whom looks uncannily like Raffles). 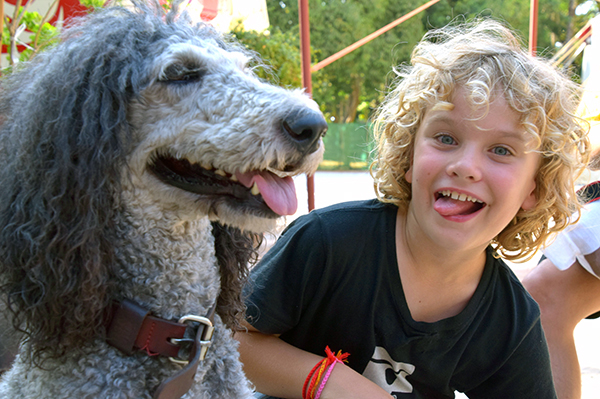 But instead of watching their amazing antics, we’re expected to put on the show. Yikes. I look at the trapeze in fear, knowing my core muscles are missing in action, but Raffles races to be first up on the swing. 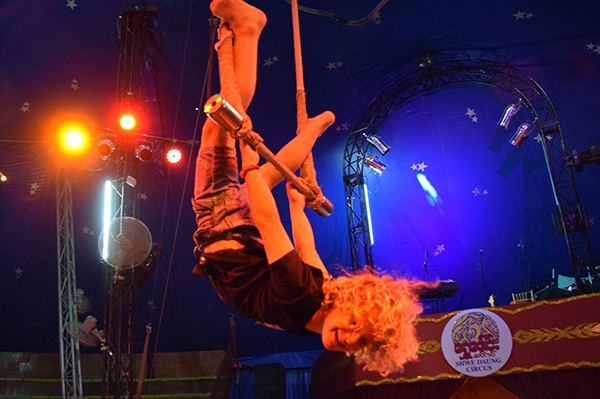 Within a few minutes he is strapped into a harness and dangling upside down with a beaming grin. He learns jumping forward rolls, backwards rolls and cartwheels before we both take on the tightrope. Balance I do have! Turns out, as I’d always expected, we’re both a pair of circus freaks and my clever little clown declares this one of the most fun moments of our travels, ever!

But Yangon has one more shimmering surprise still awaiting us… 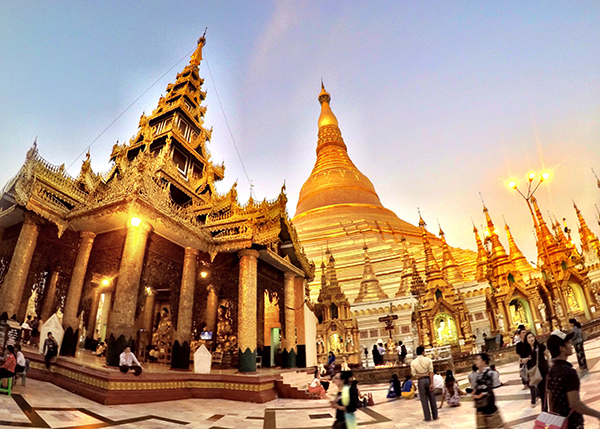 Shwedagon Pagoda is Myanmar’s oldest and most sacred sites… as well as its blingiest. The massive golden Pagoda is perched atop of Singuttara Hill and dominates the Yangon skyline. 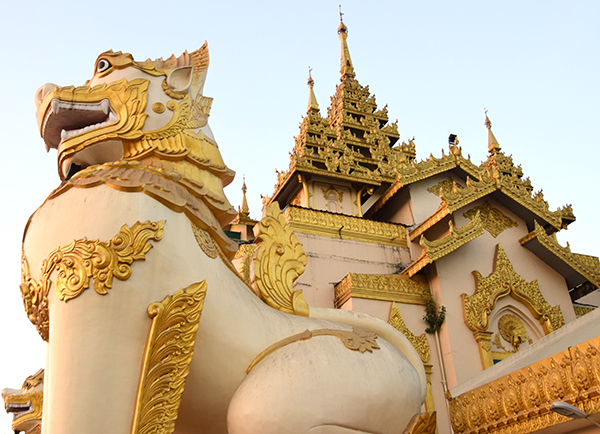 The complex is said to be covered in a staggering 6-tonnes of gold, and its main stupa alone is topped with more than 4,531 sparkling diamonds, including one coming in at a cracking 76-carats.

It is surrounded by shrines, crouching elephants, lions, serpents and ogres protecting what is the Pagoda’s greatest treasure: sacred relics of the Gautama Buddha. The stupa is solid, but Raffles prefers the legend that has unstoppable flying swords protecting the interior from unwelcome intruders. 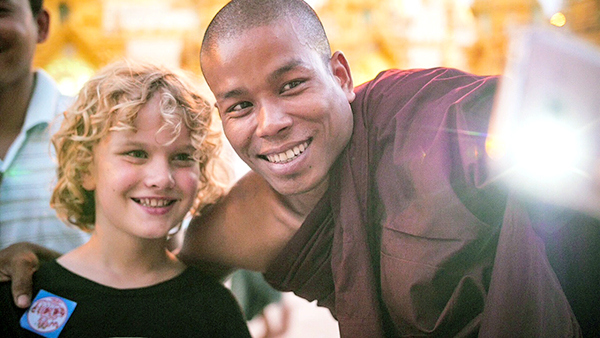 Ribbons of monks are making their pilgrimage to the sacred site when we visit, but curiously some seem more interested in my golden-haired boy, and are lining up to snap selfies with him on their snazzy smartphones. It’s a sight that is as surreal as the dazzling temple itself. 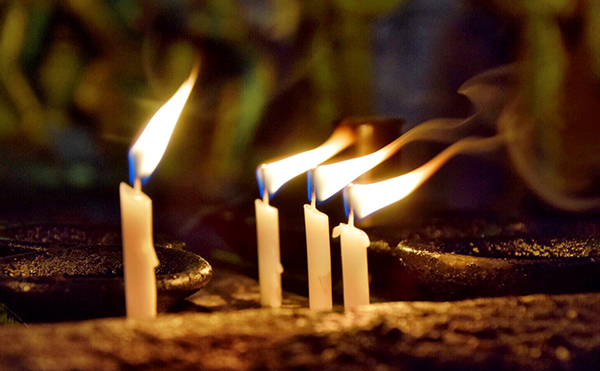 As darkness falls, and Raffles escapes selfie duties, we help light some of the 9,000 oil lamps encircling the stupa. 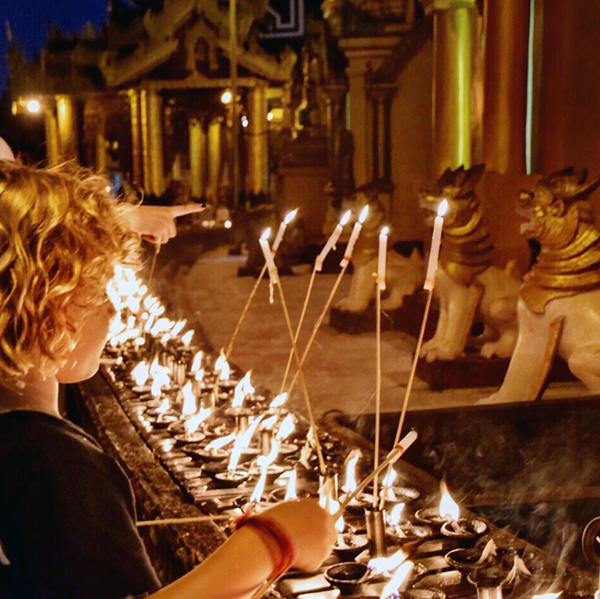 Devotees of the Buddha kneel and chant in a haze of burning incense and the glow of flickering firelight, a scene that is so exquisite it casts something of an enchantment over us, making it hard to leave. 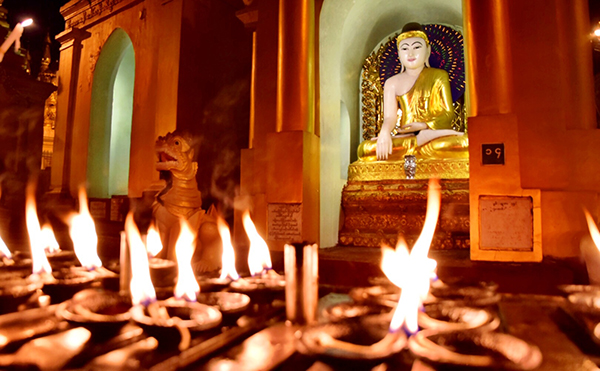 But leave we must for our evening’s accommodation, the warm, welcoming and ultra modern ibis Styles Yangon Stadium. Our rooms are more spacious than I am expecting and have everything we need for a comfortable stay. The hotel facilities are excellent and include a café deli, gym and the fabulous open air 369 restaurant and bar which offers stunning views over Yangon, great cocktails and fantastic food. 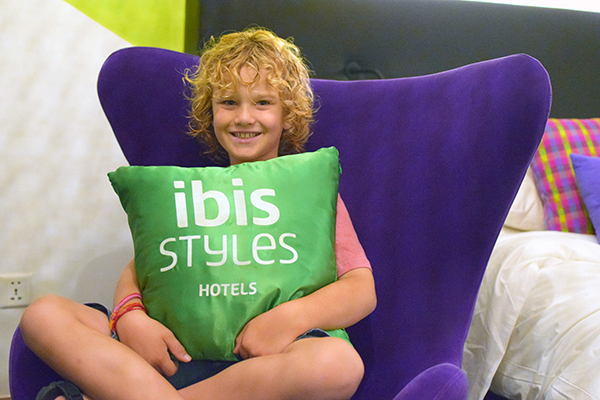 Raffles stuffs himself silly with enormous oversized juicy prawns and a rainbow of different mocktails before we decide its time to dive into our comfy beds to catch a few z’s before tomorrow’s 5am start and another day of incredible challenges and adventures, #escapers17 style.

MYANMAR WITH KIDS  – NEED TO KNOW BEFORE YOU GO

When to visit
November to February is the best popular time to travel with little rain and less humidity.
Language
Burmese
Currency
Burmese Kyat
Power
The standard voltage is 230 V and the frequency is 50 Hz. Several power sockets styles are used so our recommendation is to take an all in one international power adapter
Visa & Passport Requirements
Visas for Myanmar are required by Australian, US, EU, British & Canadian Nationals. You will require a passport with 6 months validity and can apply for a 28 day eVisa online but must enter at Myanmar at Yangon, Nay Pyi Taw or Mandalay international airports or at Tachileik, Myawaddy or Kawthaung land border checkpoints.
Health
Mosquito borne diseases are a risk in Myanmar. When travelling with children prevention is best so apply child-safe insect repellent (with no more 20% DEET) at regular intervals and make sure they are dressed in long but light clothing at all times. While there are no essential vaccinations for travellers to Myanmar, we suggest visiting your family GP at least six weeks before travel for up to date advice on immunisations.
Food Safety
Avoid tap water, raw foods and food stalls with dubious hygiene standards, and avoid tummy bugs by following our safe eating mantra of “cook it, peel it or forget it.

Disclosure: While we had to work for it, competing in and completing challenges, Raffles & I were hosted by the fabulous folk at AccorHotels, Scoot Airlines, Tiger Air and Asia Holidays during the incredible Myanmar leg of our #escapers17 adventure. However, all opinions, general face stuffing and silliness is our own.

14 Comments on Myanmar with kids: Temples, trains and the flying trapeze in Yangon