What does drinking wine whilst fully-clothed in a swimming pool, Justin Timberlake and being blindfolded in a sprawling presidential suite have to do with visiting Yangon?

It’s a long story. You see, it’s not everyday you jet into to a city with 22 of your newest friends and your nine-year old kid, ready for nothing more than a shower and a little time out in your luxurious 5-star hotel room when, instead, you’re accosted by the gyrating moves of the hotel staff… who appear to have more than a little sunshine in their pockets and just want to dance, dance, dance.

But that is exactly what happens as we arrive at the funky and fabulous Novotel Yangon Max, to be greeted by the fabulous flash mobbing staff and an infectiously happy soundtrack of disposable Justin Timberlake pop. 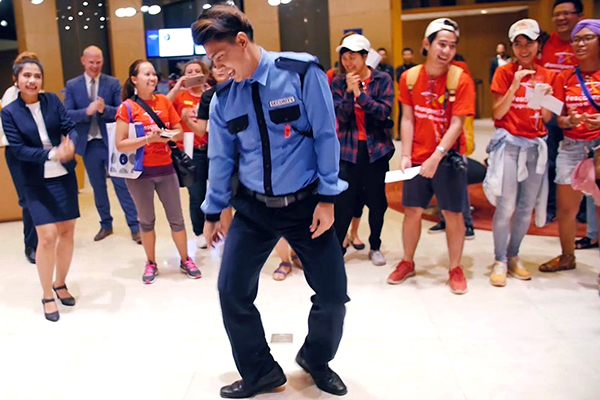 I can also assure that it’s not everyday that this card-carrying rock chick busts out the moves to a pop song that’s best known for its starring role in a kid’s movie about neon-haired Trolls, but what can I say? I really “can’t stop the feeling” after an epic welcome like this.

But, as usual, I digress. Raffles and I boogie our way to our room, which is spacious, modern and bathed in seductively warm earthy tones. 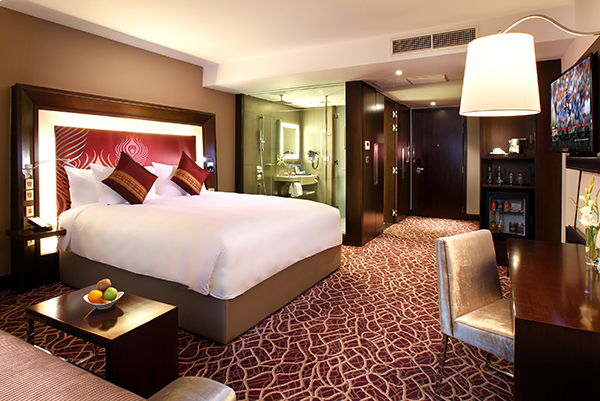 We scoff the deconstructed sticky rice and mango dessert that has been left to greet us. 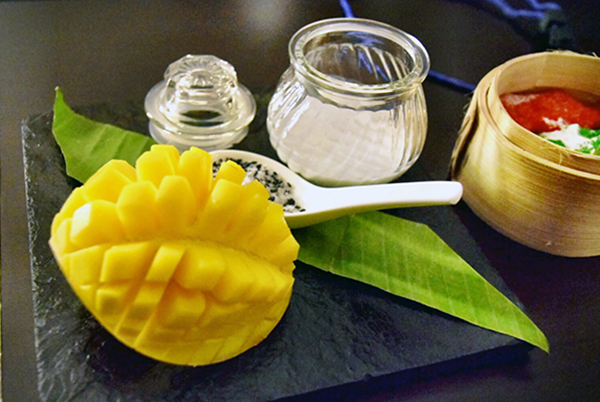 But there’s not time for much else as we have been beckoned to the Presidential Suite for an audience with the #Escapers17 organisers, a couple of blindfolds and a hot date with a bucket of something fruity. 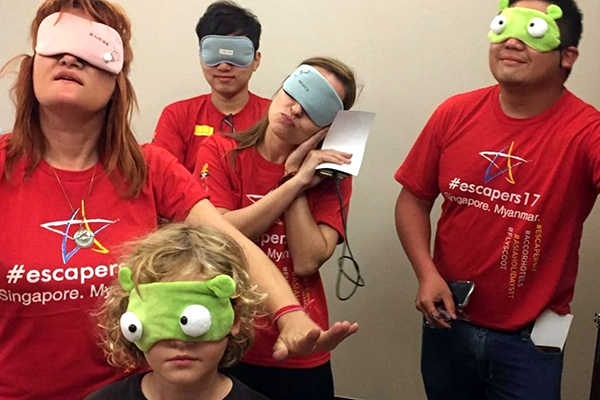 And though I can immediately pick the taste of the bucket of peeled and slimy snake fruit we’re dipping our fingers into, I’m buggered if I can remember its name. So instead of winning a point for the team, I soak up the atmosphere of the exclusive suite with its private bar, office space, enormous lounge and decorous chandeliers. When I stumble into its luxurious bathroom, complete with spa overlooking the city, I wonder if there’s anyway I can trade up from my superior room that’s located literally right next door.

That would be a no! Instead Raffles and I dash back to our own room, quickly tidy up and head upstairs to Le Cellier Wine Bar for pre-dinner drinks and more #escapers17 shenanigans on a balcony overlooking the city and the glorious glow of Shwedagon Temple.

Then its down to the hotel’s splendid Pool Deck and Bar for a fantastic barbecue dinner and a selection of tasty beverages.

I, however, am in sensible mummy mode, so avoid the tasty beverages and refuse to allow my son to swim alone or unsupervised in the resort’s massive swimming pool. 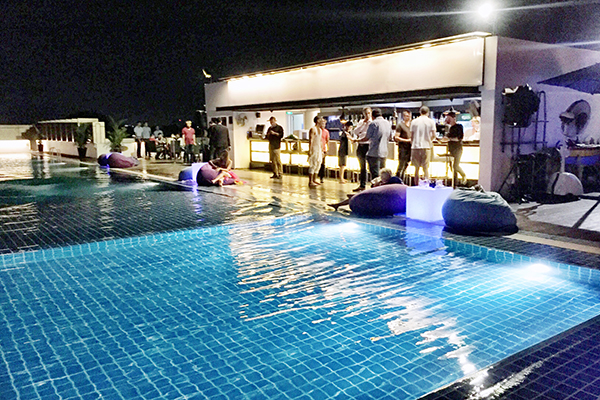 That is until more dancing staff members turn up to perform another musical number, only this time they’re dancing barefoot in the shallow end of the pool. With my boy sulking quietly in a beanbag over my refusal to allow him to swim in the deep end alone (because apparently it’s totally selfish of me to not want him to drown) and somewhat inspired by the flashy and splashy dancers, I find myself in said pool, fully clothed and extremely sober. Because damned if I’m going to stop the kid having a good time.

Though Raffles is overjoyed at my juvenile antics, and leaps in with me (which is the desired effect) it is around this point I realise that I am failing spectacularly at sensible adulting, so I grab a glass of wine and forget about the whole sobriety thing. And let me tell you, nothing shouts class like a fully clothed, middle-aged mother of two knocking back a glass (or five) of Sauv Blanc in a hotel swimming pool while her nine-year old, who should have been in bed hours earlier, shoots her repeatedly in the face with a giant water pistol.

Before parental outrage ensues, Raffles and I were accompanied in the pool by colleagues of the completely sober variety and Raff’s safety was my priority at all times.

But enough about my ridiculousness, and back to the fantastically modern Novotel Yangon Max, which opened in 2014 and still rocks that glorious “new car” smell. Something which is a breath of fresh, and extremely sophisticated, air after a day of exploring the fabulously crumbling colonial city of Yangon (which I’ve written about here) and its busy streets packed with ramshackle food stalls manned by vendors rocking betel nut stained grins (which you can read more about here).

Along with that fabulous pool, the facility-packed five-star hotel offers a spa, fitness centre and tennis courts, four other bars and a stunning well-stocked wine cellar (which almost completely absolves me of any blame for any in-pool imbibing because seriously, who can resist?)

There are also three restaurants, serving international, Chinese and French cuisine. The hotel’s buffet breakfast is nothing short of brilliant and, along with a huge selection of Chinese and western favourites, boasts a mohinga station where the hot and sour fish noodle soup, a local breakfast favourite, is prepared fresh to order. 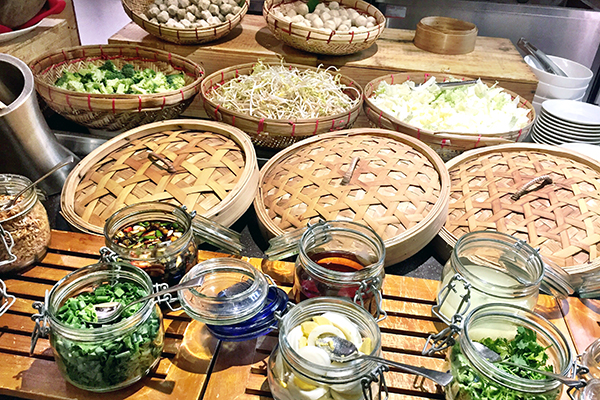 The steamy soup is a delicious start to the day and, incidentally, a fab hangover cure should you ever find yourself accidentally drinking up a storm fully-clothed in a hotel pool.

But what about kids, you ask? Turns out the Novotel Yangon Max love them as much as they love breaking out in dance. There is a kids’ club, a playroom, video game zone (as well games in room), foosball and children’s menus. And, for those travelling with littlies, cots, baby baths and babysitting on request. In fact, there’s really nothing for families not to love about the place.

Especially it’s heart. Though I know we are hopelessly devoted to Accor Hotels, and their dedication to social and environmental projects, it never ceases to amaze us just how deep each individual hotel digs in to support its local community.

At the Novotel Yangon Max, we were thrilled to discover that the staff volunteers their time to reprocess the hotel’s left over soap. So, instead of all that little-used hotel soap ending up as landfill, the discarded soap is washed, sanitised with non-toxic food grade chemicals, jazzed up with natural fragrances like citrus, flower petals, chamomile or lemongrass, and repressed by hand in an eco-friendly cold press. 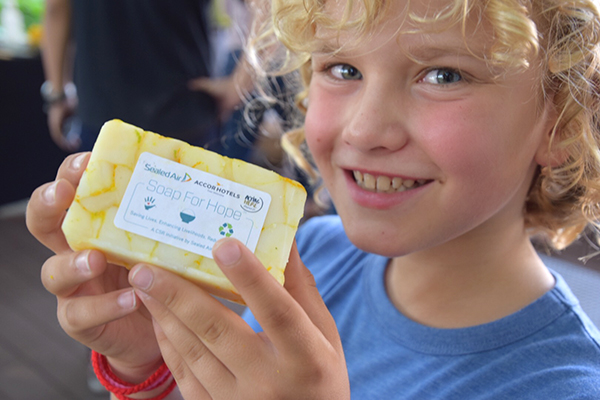 The recycled soaps are then distributed to those in need in the local community, along with some basic hygiene training. 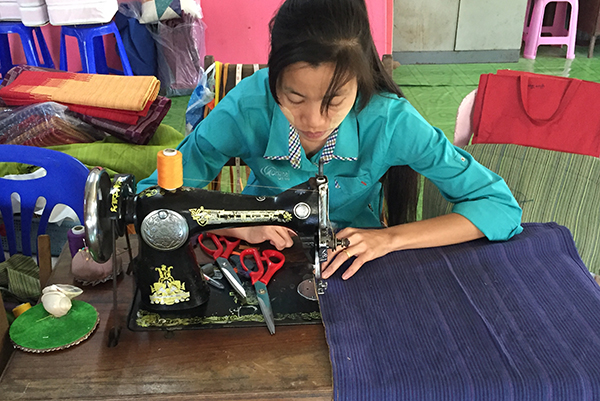 The soap and the toy both lead to questions and incredible dialogues with an empathetic Raffles, who through our travels and programs like these is becoming increasingly aware of the importance of not only caring for the environment but in supporting the communities that we travel to in practical and sustainable ways.

And he is actively working to do something about it, cancelling his own birthday party on our return and requesting that instead I donate the cost, on his behalf, to children in need.

Meaning that his adulting-challenged mother might just be getting this parenting malarkey right after all.

Disclosure: Raffles & I were hosted by the fabulous folk at AccorHotels, Novotel Yangon Max, Scoot Airlines, Tiger Air and Asia Holidays during this incredible leg of our #escapers17 adventure. However, all object foolishness and opinions are our own.

9 Comments on Myanmar with kids: Parenting 101 at Novotel Yangon Max