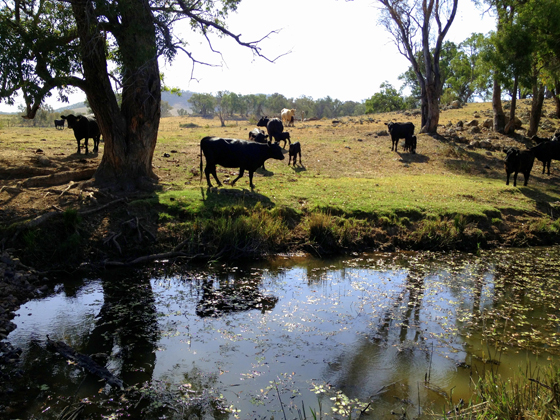 Raffles and Sugarpuff love a road trip, and when that road trip comes with the promise of a farm stay at the other end, their excitment is off the scale. The only catch is that this particular driving holiday coincides with the youngest of said kids announcing that, “I’m never wearing nappies again”.

Now let me tell you, there is nothing quite like being cooped up for hours and hours in a small car with a smaller child and her very fickle bladder. In this case what should be a scenic four-hour drive from Sydney to Mudgee becomes a six-hour festival of wee, with Sugarpuff demanding we stop every ten minutes or so to try her new travel potty, and our patience. But, with all due credit to our piss-taking princess, we do eventually arrive at our destination, happily accident free.

In historic Mudgee’s pretty town centre we stop for a toilet break, of course, before we head another half an hour (and another toilet stop) out-of-town to test our car’s off-road skills down several kilometres of dirt track. 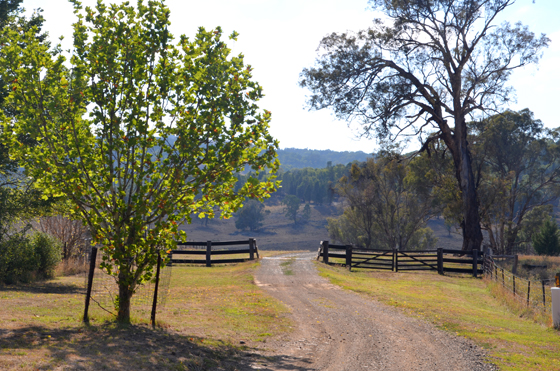 We drive past posses of cows eyeing us off suspiciously, to Old Bara – a sprawling working cattle farm and the guesthouse which will be our home for the next few days. 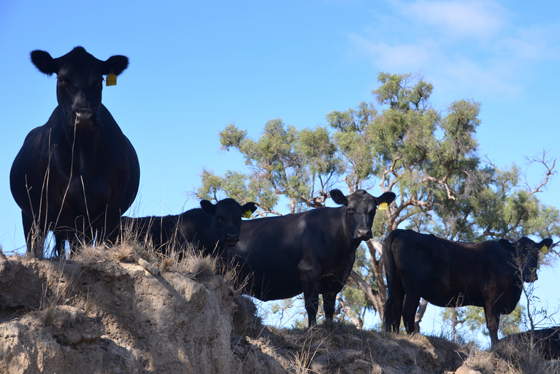 The spacious self-contained four-bedroom guesthouse is surrounded by verandas that take in spectacular views of the surrounding property and a curious bull in the neighbouring paddock. 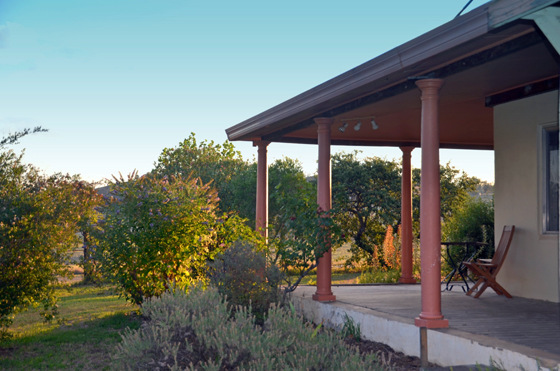 Inside there’s a well-equipped kitchen that I immediately develop a crush on, while Mr Eats World falls in deep smit with the outside BBQ area. In the fridge there’s a platter of Old Bara Grass Fed beef rissoles, steaks and sausages waiting so we prepare a bovine feast and, as Mr Eats World barbecues and I sip (and by sip I mean guzzle) a glass of Mudgee wine, the kids play happily on the swing and slide they’ve found in the huge garden area. 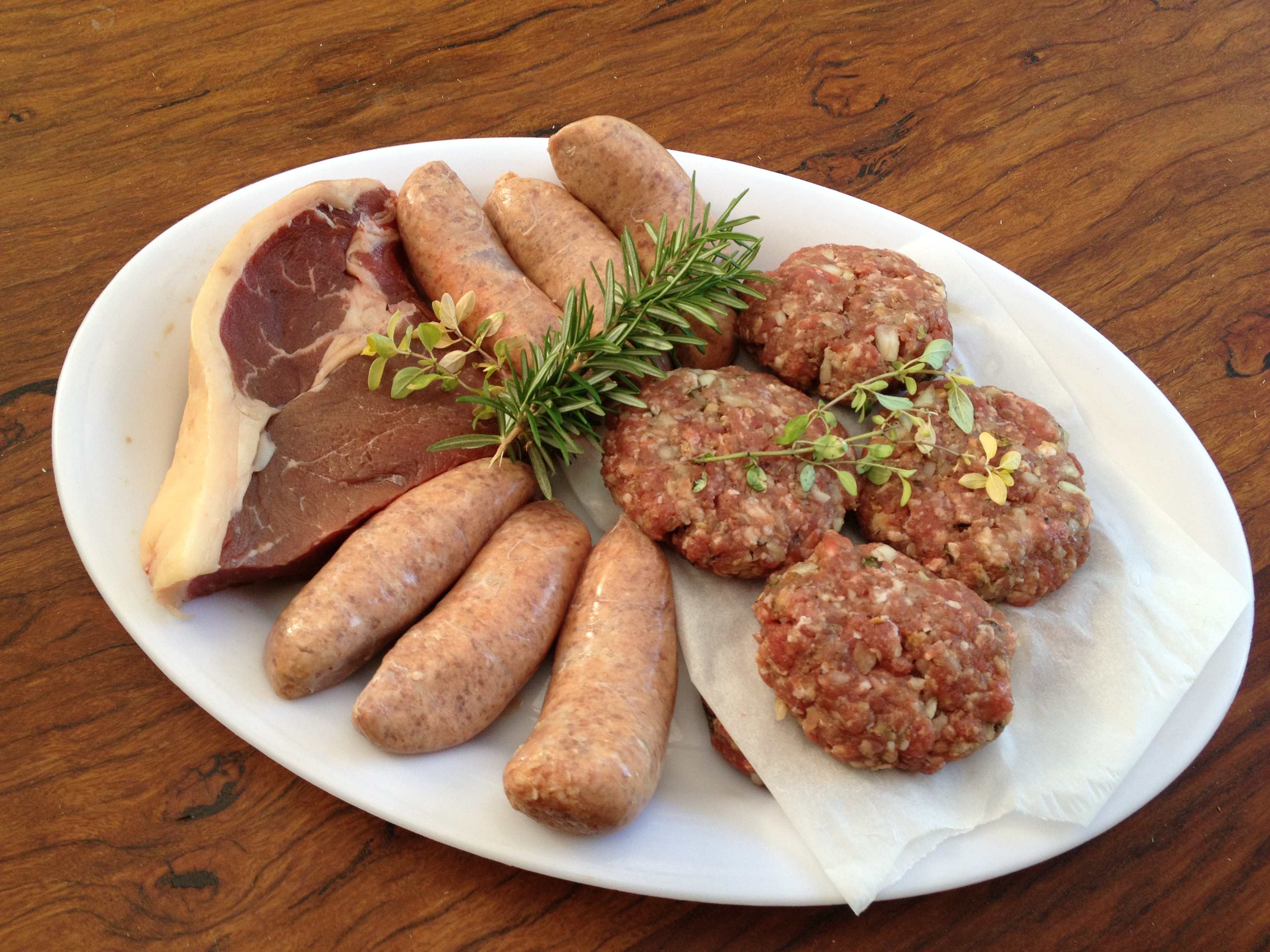 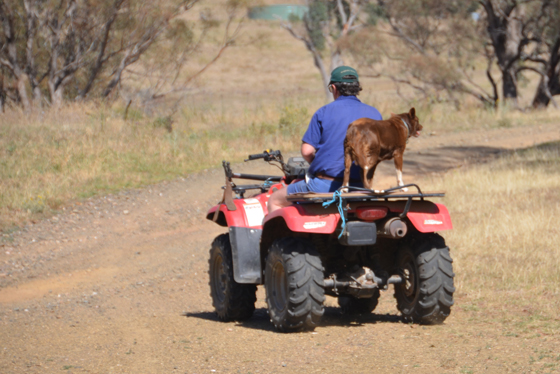 Meanwhile Sugarpuff, who has made herself quite at home, vanishes into the homestead long enough to find a cricket bat and ball and remove all of her clothing in preparation for a game of nude cricket.

In fact, we’re all feeling pretty at home here, though most of us in a fully clothed kind of way.

The following day we head to town to give Sugarpuff the opportunity to water every public facility in Mudgee. But also to grab a few supplies, and by supplies I mean alcohol. Our first stop is Leaning Oak Dairy where we fill the car with and a bottle or two of cheeky Shiraz, freshly made labne, creamy artisan goat’s cheese and cajeta, a Mexican style goats milk caramel. While the kids grope some of the much-loved animals they came from. Baby goats are petted, the resident dog pounced upon and some teeny tiny kittens came out for a cuddle with my pet-loving pair. 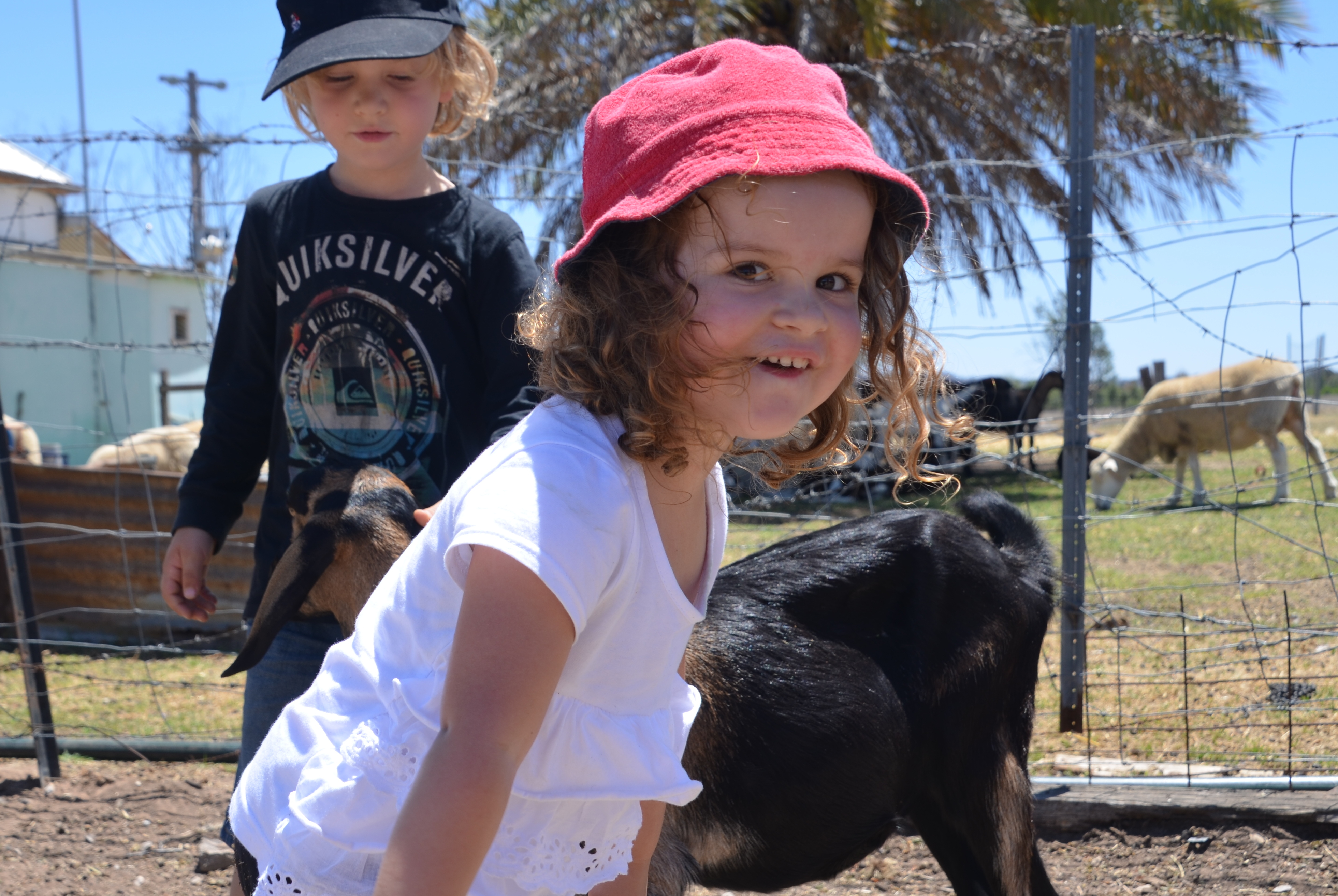 At Lowe Wine, one of the most beautiful, family friendly and inspired vineyards I’ve ever come across, we sample a drop or two (and by drop I mean bottle) of their grape juice. 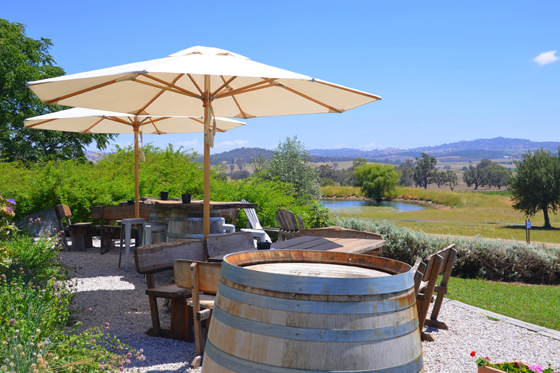 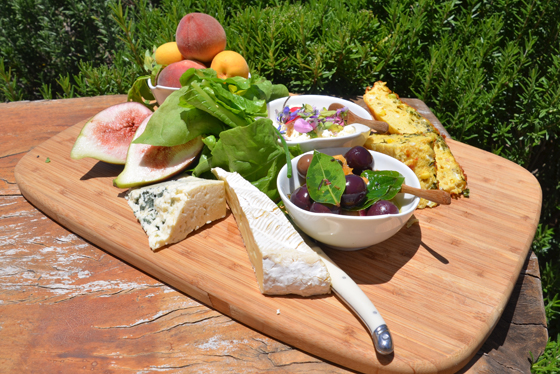 And another of fresh-baked potato and rosemary bread, horseradish and herb mayo, rustic turkey terrine, sausage, glazed ham and the most incredible pork rillettes. All prepared to sublime perfection. 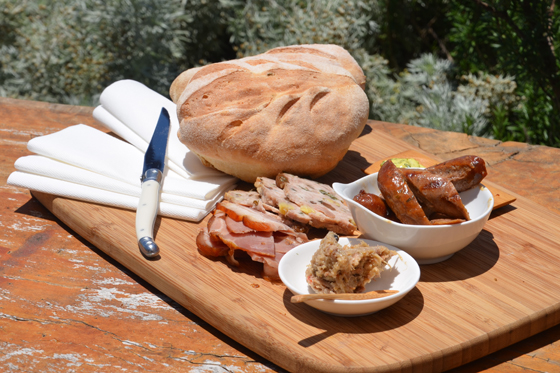 Afterwards we walk (stagger) it off along the cycle trail. 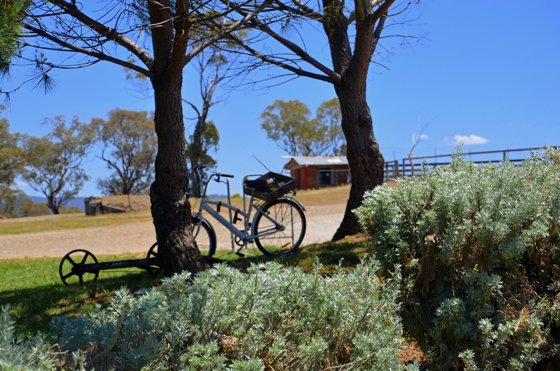 This gives the kids even more opportunities to molest unsuspecting animals including the lovely Luis, a rambunctious six-week-old puppy who accompanies us, chewing bits off the children all the way… but nothing that won’t grow back. 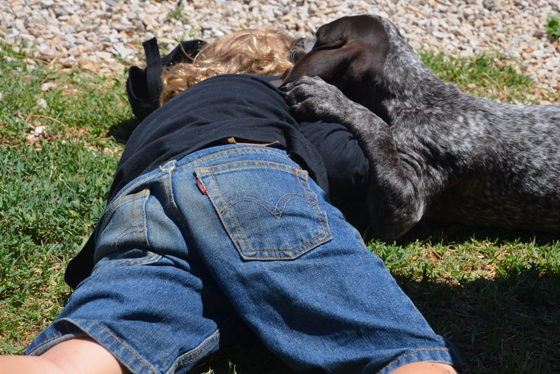 There are also chickens to meet and eggs to gather, a job Sugarpuff takes very seriously indeed. And then there are the donkeys, one of which my little dude commandeers. 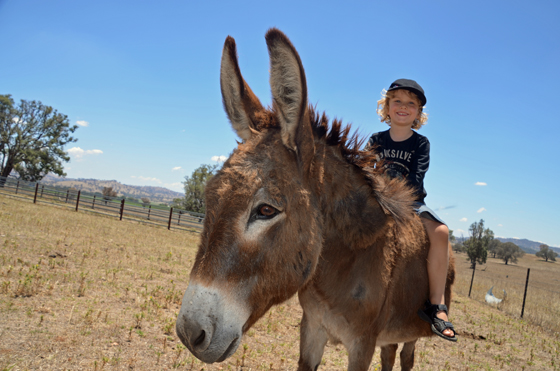 We make a pitstop at Mudgee Honey Haven to stock up on luscious raw honey and sticky fresh honeycomb while the kids take on their dad in a round of mini-golf. Then its back on the road to Old Bara for the dusk drive of a lifetime.

As we reach the dirt road back to the farm we’re greeted by the ladies of the moo posse. Only this time they have company. 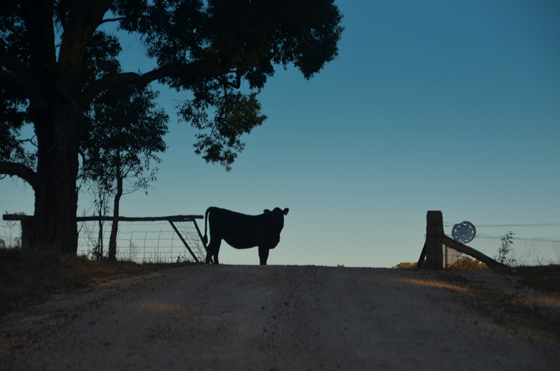 Either it’s the animal apocalypse or some recalcitrant teenage ‘roo has posted a party on critter Facebook while his parents are away because literally hundreds of kangaroos, wallabies, and wallaroos bound past the car. 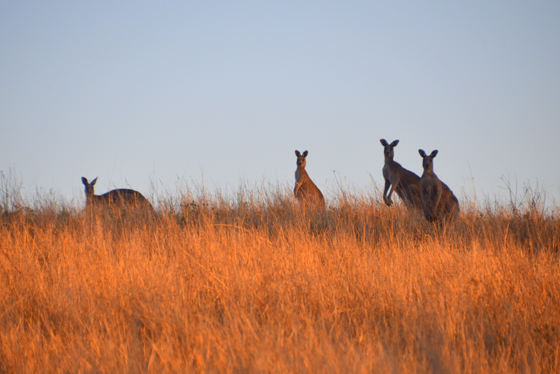 Wiley foxes (obviously smuggling the booze) scarper between the trees and dozens of wild hares surreptitiously pop their ears out of the long grass to make sure we’re not the cops ready to shut down their party.

An old man wombat out for an evening stroll stops to say hello – oblivious to the shenanigans going on around him. 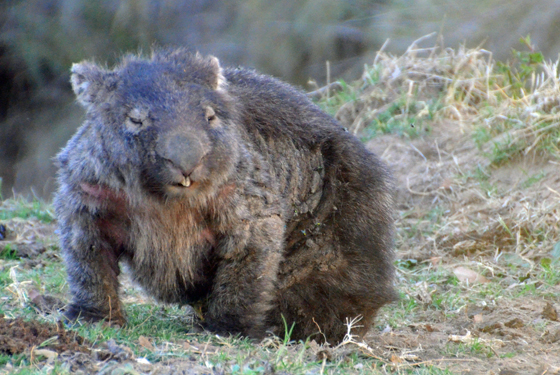 And, what should have been a five-minute bash down the dirt road to our digs, turns into an hour-long DIY Australian wildlife documentary. It’s an incredible sight and we’re squealing as loudly as the kids as yet another ‘roo or ten cruises by.

Over the next few days Mudgee in all its family friendly glory beckons, but the kids have fallen in love with Old Bara. 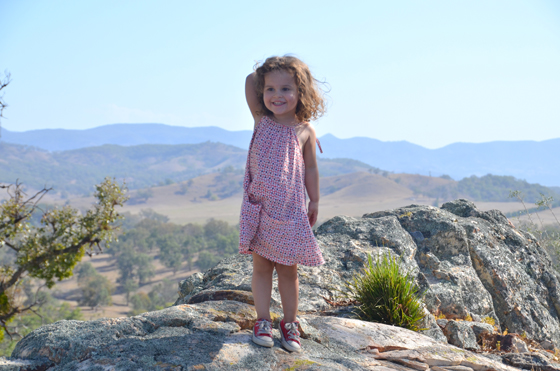 And its lovely lady residents. 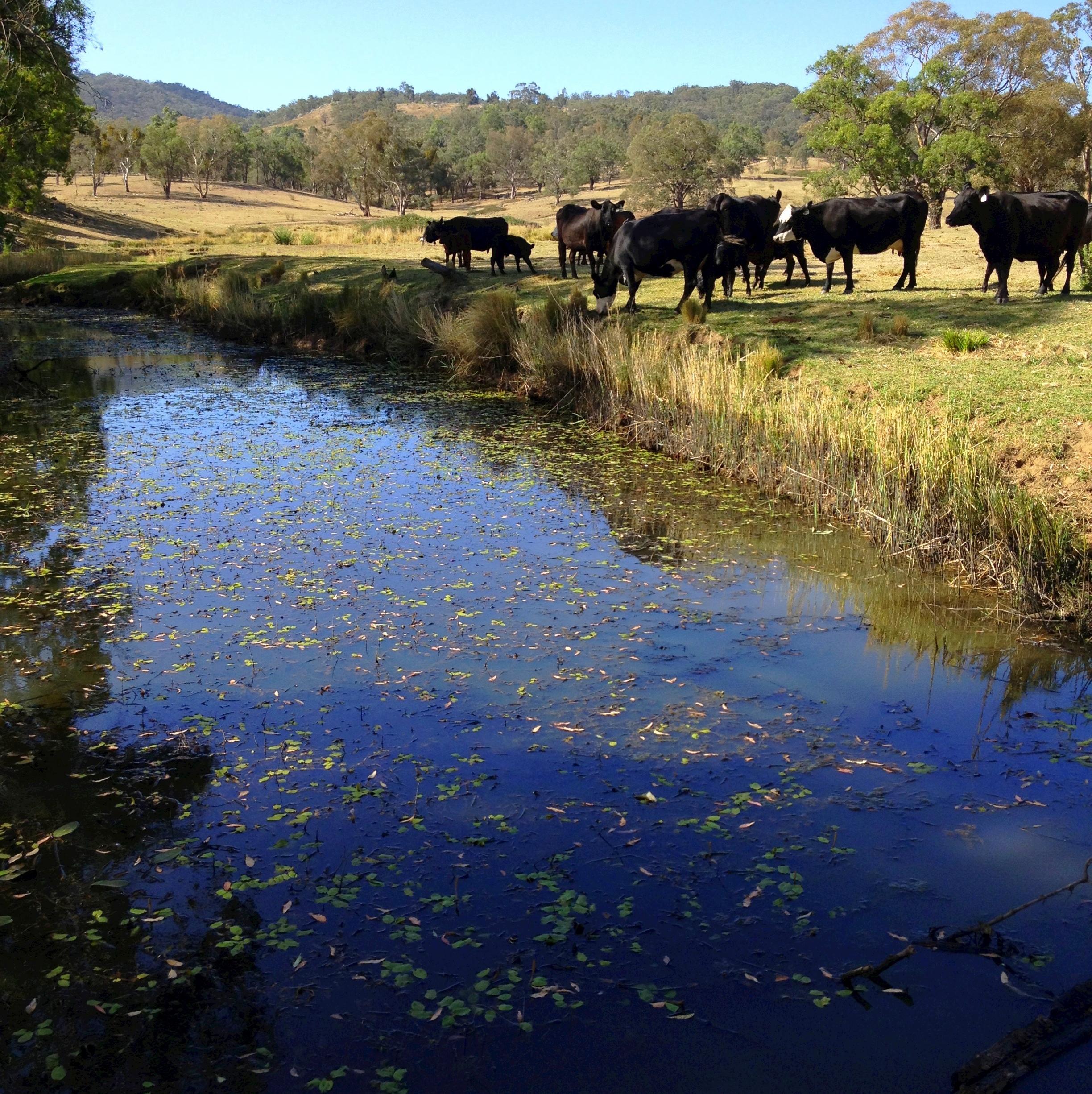 Not to mention the space, the landscape, the beautiful sunsets, the BBQ, the swings, and the games of nude backyard cricket. 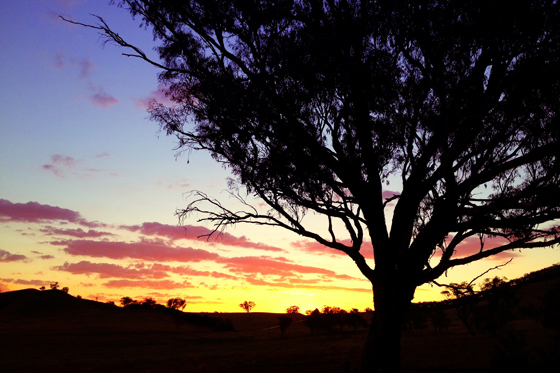 So we decide to embrace its simple pleasures and just hang out and relax until we have to say our farewells to the farm and Raffles new buddy, Tippo, who is a frequent visitor to our little homestead. 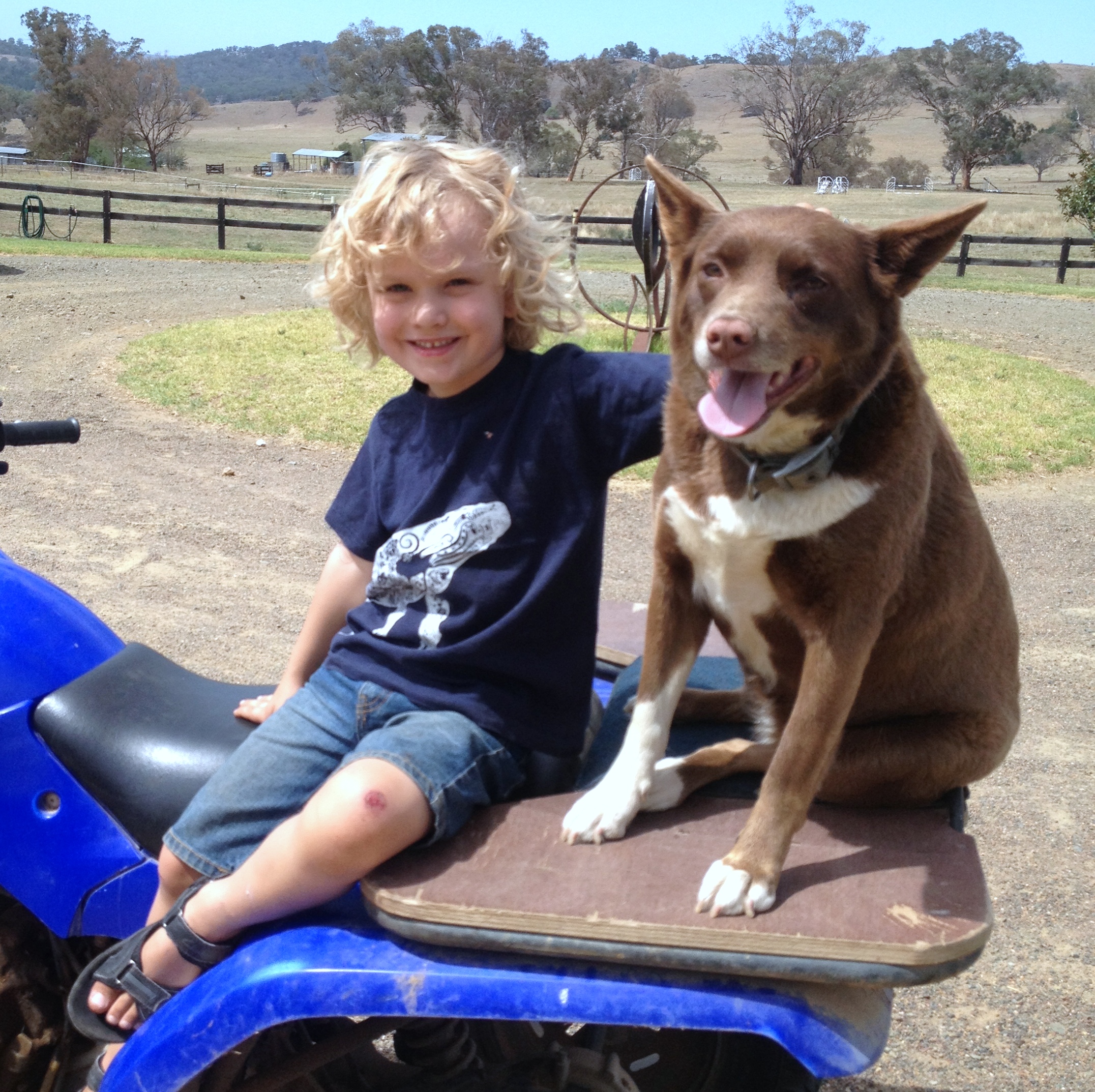 We pack our teary kids in the car, squeezing them in somewhere between the boxes of wine and an esky full of cheese and honey, for the drive home. But we quickly realise that with Sugarpuff’s new found lavatory love and both their long faces, the scenic Bells Line Road is more likely to become the long and whining road. And so we factor in a pit stop at historic Rylstone for lunch at the fabulous 29 Nine 99 Yum Cha, knowing that if there’s one thing guaranteed to put a smile on Raffles and Sugarpuff’s faces it’s a bowlful of dumplings! 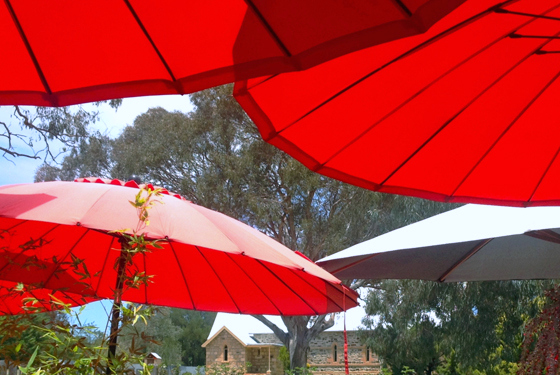 As we relax under the bright red umbrellas nestled among Rylstone’s historic sandstone buildings and devour plates of some of the best steamed dumplings I’ve eaten this side of Hong Kong, the kids smiles quickly return. 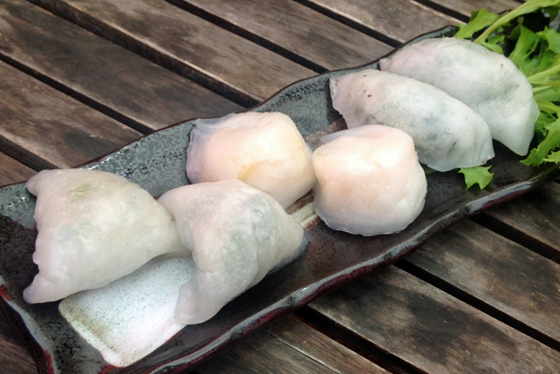 But Tippo is not forgotten, his name dotting their conversation as often as Sugarpuff asks to pee… which is often as we drive… in staccato stops, wee, wee, wee all the way home.

7 Comments on Moo Much Fun in Mudgee // Old Bara