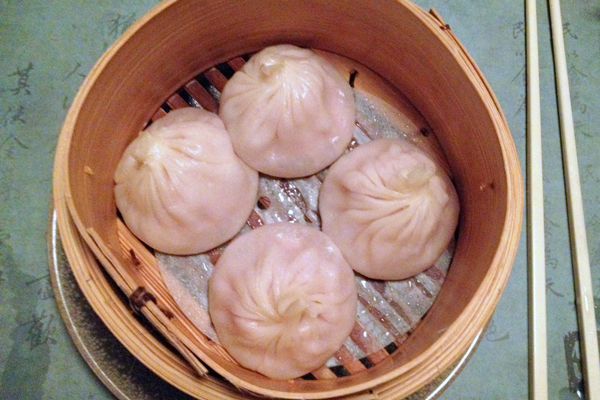 The first thing we needed to do at Mr Wong was find it. That’s ’cause it was hidden away in a mysterious alleyway* in the city which is so, so cool because it reminded me of somewhere you’d bump into the Teenage Mutant Ninja Turtles. Luckily though there were no traps and no Krang or Foot Soldiers to fight. Instead there was a huge doorway that led into an awesome restaurant that smelled and looked so good it reminded me of being in Shanghai.

This place was epic, yo! There were lots of different spaces, paintings of old Chinese people, big timber  beams on the ceiling and an open kitchen where I could see the food being made. But best of all there was a wall of duck! No wonder it smelled so good. 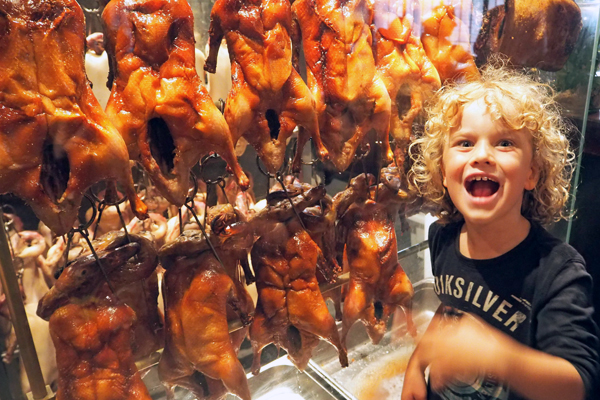 The waiters were the nicest and most helpful ever. They really, really looked after us and made great suggestions about what would be nice to eat. Not that I needed much help there. I knew exactly what I wanted as soon as I saw the menu. Dumplings. All of the dumplings.

Sadly mama only let me choose a few but let me tell you these were the epicest** dumplings I’ve had in Sydney.

I love xiao long bao and the ones here were really, really good and the jade seafood and chive dumplings were so pretty they looked like an exploding flower garden in a steamer and they tasted even better than they looked. 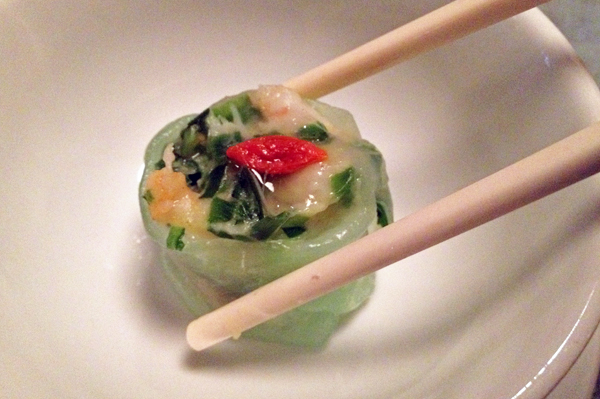 The king crab and lobster rolls (in katafi pastry) were super duper crunchy on the outside and soft and yummy on the inside. They were so good I stole an extra one while my dad went to the loo. He was a bit annoyed when he got back. 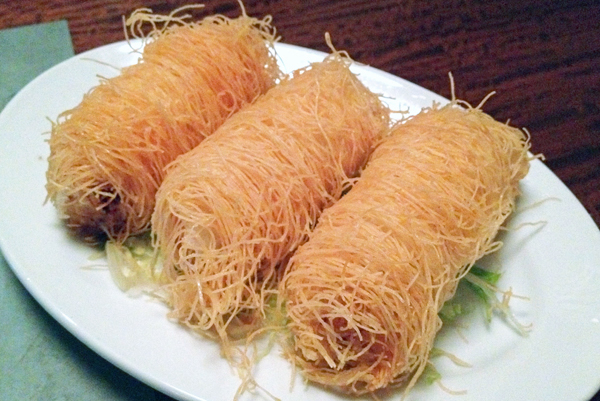 Mama and dad really loved the prawn toast (prawn toast with foie gras and almonds) which looked more like balls covered in nuts to me. 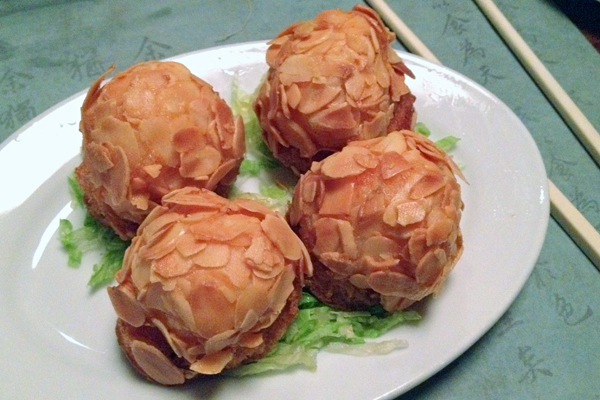 They only let me have one because they said I’d already pinched too many bits of the other dishes and they actually wanted to eat something… so mean.

Another dish we tried was called Chueng Fun. It was a soft rice roll filled with prawns covered in crunchy stuff and coated in sesame seeds. 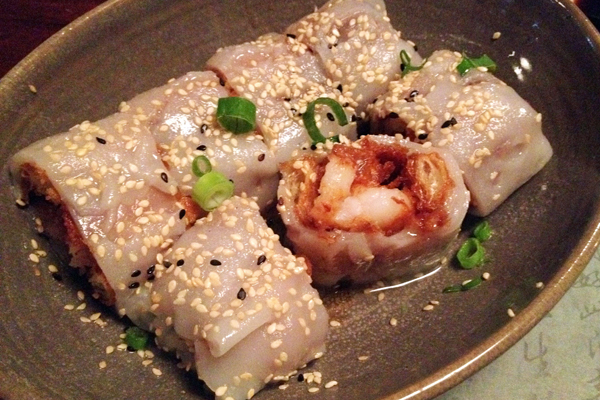 I LOVED this dish so much because it was all squishy and crispy at the same time…. and delicious too.

There was no way we were leaving without trying the duck so we got Peking duck pancakes. 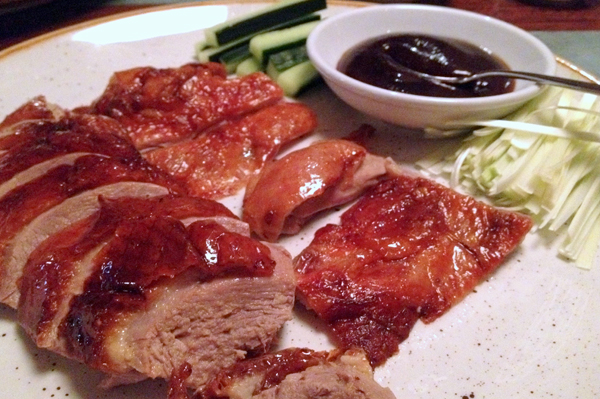 It was so, so juicy and had crispy skin. There were lots of bits of stuff to stick in the pancakes. It was so good I could have eaten the whole wall of ducks.

We also ordered some special fried rice (with pork and prawn) and mama got some mushrooms*** which I think are mostly gross but she said were fantastic.

I’m don’t usually like Asian desserts that much but the ones we tried were A-MAZE-ING!  First there was a dish that was kind of like mind-blowing strawberry granita (strawberry ice, sheep’s milk yoghurt sorbet, strawberries, shiso and honeycomb). 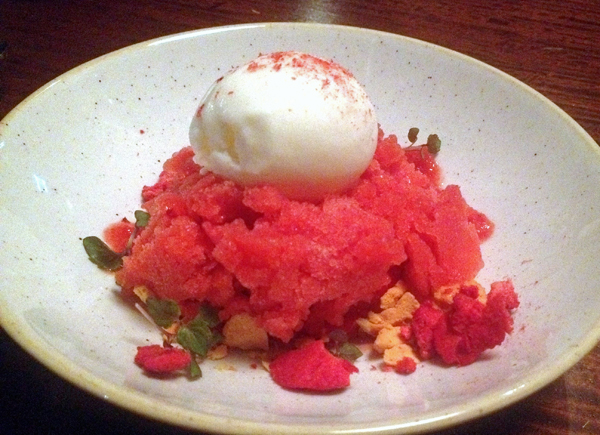 Then came the fried ice-cream. It was a huge ball and we cracked the fried shell open, inside was the best vanilla ice-cream and it came with yummy butterscotch sauce. 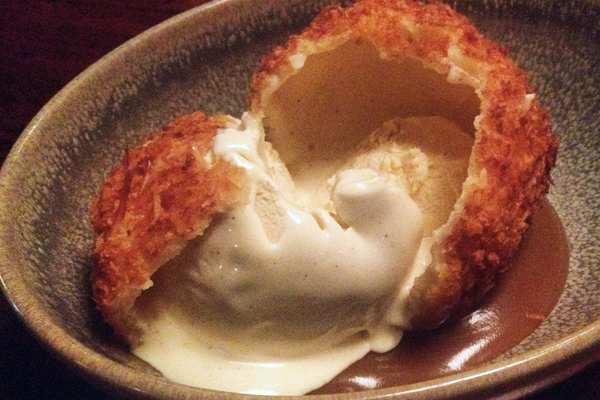 Fried ice-cream sounds weird but it so good I had to fight dad for it but I’m pretty scary when I’m hungry and I scared him off.

Mama says Mr Wong is a special occasion restaurant but I say we should move in. I’d could live here and become a duck herder and herd them all into my belly.

Reviewed by Raffles – aged 6
(bracketed detail by his mama)

* It’s actually just off Bridge Street
** A rather interesting addition to the English language by Raffles.
*** The four types of braised mushrooms stir-fried with bamboo shoots and asparagus was indeed fantastic and, to be frank, I’m glad Raffles didn’t want them because it meant I actually got to eat something for a change