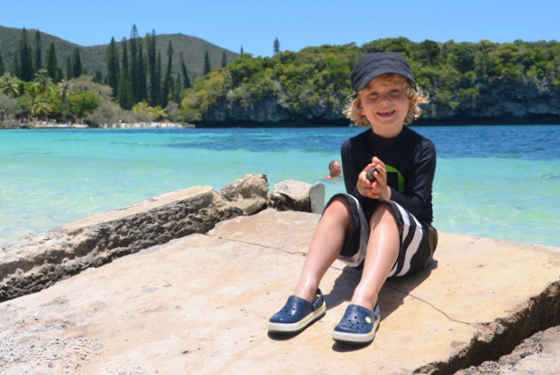 The first thing we notice when we arrive at l’île de Pins? The water is blue. Retina searingly so! The second? Our daughter has a big thing for coconut. Big enough that we’re considering the need for some kind of tropical fruit rehab before she starts freebasing them.

While Sugarpuff slurps on the first of many, many coconuts, and Raffles does a lovely rendition of a song about a bunch of them, we get our bearings. 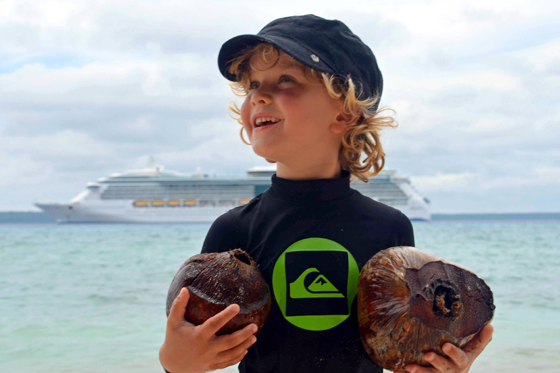 The pretty Pacific island, part of New Caledonia, is only 14 km wide and 18 km long, but it is surrounded by pretty beaches, swaying palms and massive Araucaria pines that grow up to 200 feet high. And while it all sounds rather idyllic, there are tough decisions to make, people.

I mean, do we stay at the Bay of Kuto with its kilometre long beach of pure white sand, still turquoise water and coconut trees? 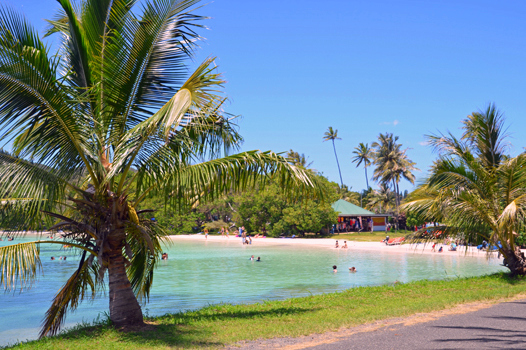 Or, do we walk the literally tens of metres to the Bay of Kanumera and its sacred rock, tropical fish, majestic turtles, more soft white sand and equally clear water? 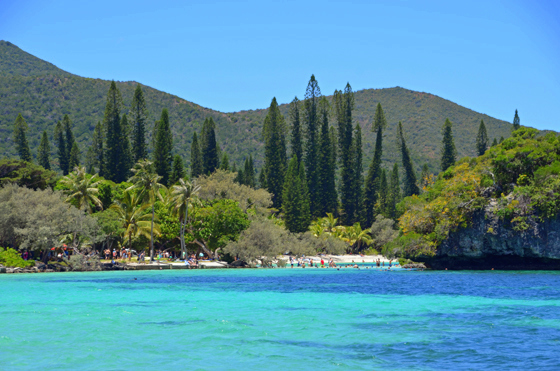 Do we snack on barbecued lobsters and escargot by the beach or scoff fresh fried banana fritters? 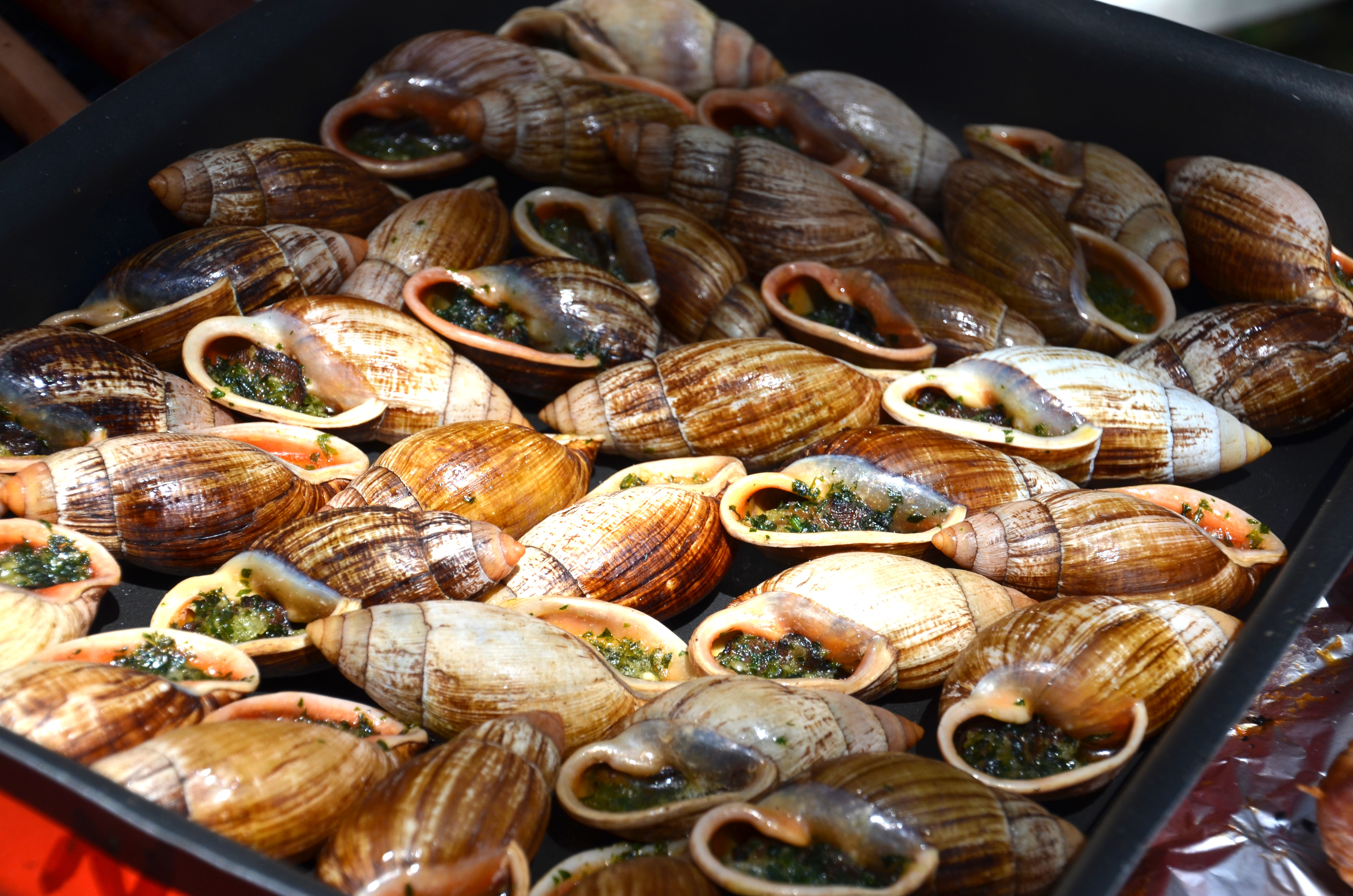 Do we try the traditional feast dish, Bougna – taro roots, bananas, sweet potato and chicken wrapped in banana leaves and cooked underground or do we just visit both beaches, kick our second stomachs into gear and eat the lot? With a side of grilled fish and golden chips? That would be a hell yeah! 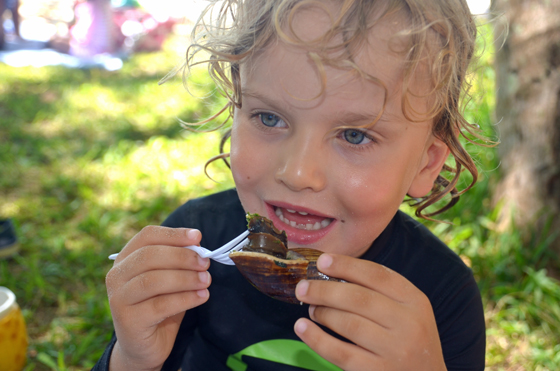 When we’re not stuffing our faces with the glorious food, collecting coconuts for our daughter, or coating ourselves in the $AU48 bottle of sunscreen we’d picked up in Noumea the day before (Noumea is a notoriously expensive city but, seriously, at that price this shit ought to be good enough to slather across the hole in the ozone layer and stop global warming), we learn that the island was named by Captain Cook – who foolishly just smiled and waved at it as he passed by instead of stopping off to lie on a towel with a couple of piña coladas. Then in the 1840s Christian missionaries passed through and, clearly more impressed with the cocktails, decided to stay.

A decade later the French arrived and got their Gallic on all over the place before deciding to make it France’s prettiest penal colony and shipped in a few thousand political prisoners (mostly members members and supporters of the short-lived 1871 revolutionary Paris Commune).

But that was then and today there is no sign of the Communards (who, unlike the 80’s band of the same name could leave them this way, and scarpered back to France). Of the roughly 2000 inhabitants still residing on the Isle of Pines, 95% are indigenous. And though Native Kanaks speak an unwritten language amongst themselves, French is still the official language.

Beyond Mr Eats World’s smattering of schoolboy French, our family’s skills in the Gallic tongue stretch only to ordering “un croissant” and talking about poo, but we find our mime skills come in very handy for communicating with the lovely locals. In fact, Raffles has barely dipped a toe in the ridiculously blue water when a couple of friendly local kids come and ask, in an extravagant combo of French and wild gesticulation, if he’ll play with them. 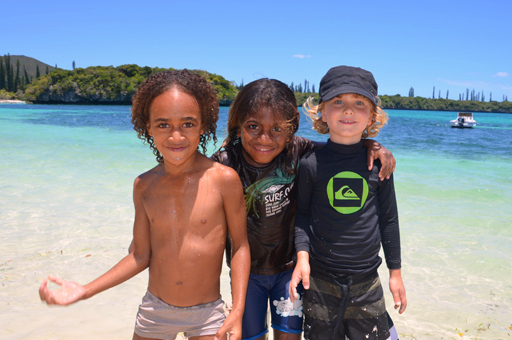 After interpretive dancing his happy accord, the three boys are off and leaping about in the water like old mates, language proving no barrier to a good time. 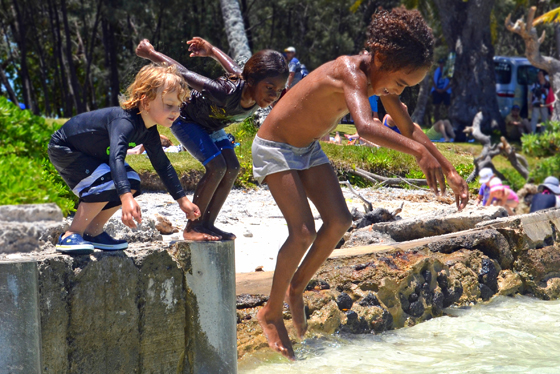 Sugarpuff, between coconuts, also stumbles across some little locals and soon she and her BYO bestie, Johnny the Pineapple, are making some non-synthetic pals to play in the sand with. 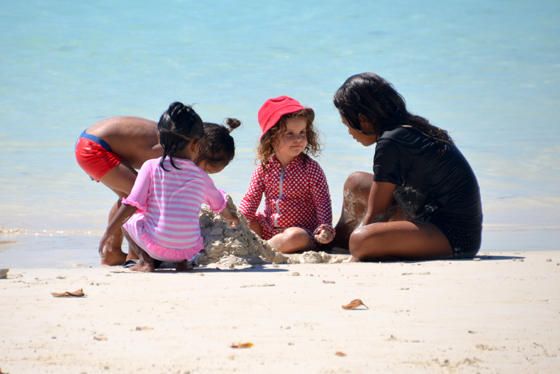 It is these moments that make travel so special. The making friends part that is, not my daughters peculiar attachment to a piece of plastic fruit. 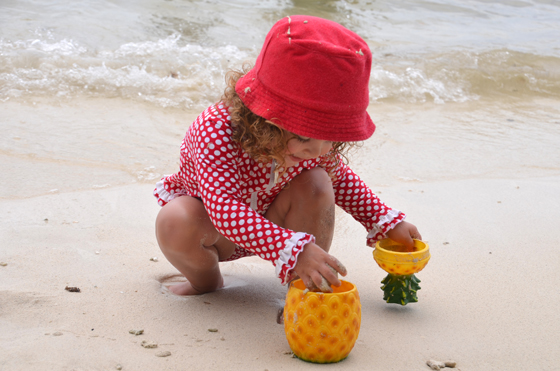 21 Comments on A French Connection in l’île de Pins